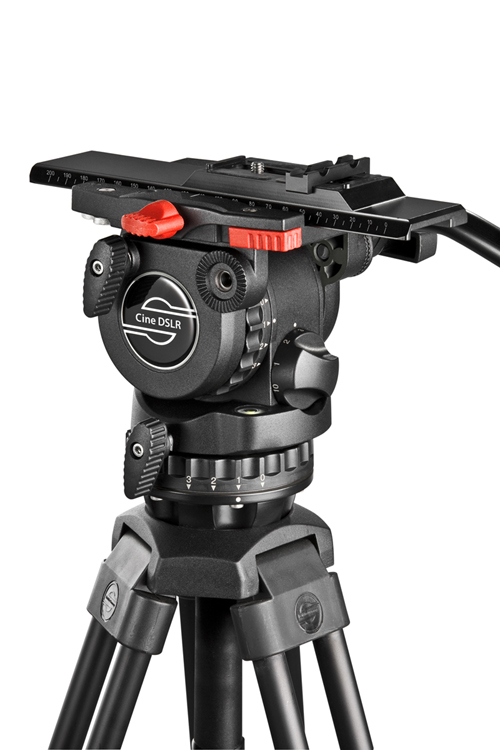 Sachtler, a Vitec Group brand, presents a new fluid head specially designed for DSLR filmmakers. The Cine DSLR has a payload range of 2 to 11 lbs (1 to 5 kg) and is thus ideal for state-of-the-art digital single-lens reflex cameras with HD video function. A counterbalance in ten steps as well as three vertical and horizontal grades of drag allow for professional operation. In addition, the Cine DSLR comes with a special camera plate with an anti-twist retainer for HD DSLR cameras.

“If a video-enabled DSLR is being used for filming, precise panning and tilting are only possible with fluid heads equipped with a corresponding tilt range. And it also requires well-engineered damping,” explains Barbara Jaumann, Product Manager at Sachtler. For smooth horizontal and vertical pans, the new Cine DSLR fluid head works with the fully developed technology of the big Sachtler heads: The 3-step damping is based on the patented Sachtler damping system. “In comparison to other manufacturers, our fluid heads in this payload range offer extremely soft and finely graded damping,” says Barbara Jaumann.

Speedbalance technology for fast counterbalance
The new Cine DSLR fluid head works with Sachtler Speedbalance technology that enables a fast and target-oriented counterbalance of the camera set-up. The long sliding range of the camera plate as well as the self-illuminating Touch Bubble are practical features of the new head. The Cine DSLR has a tilt range of +90° to -75°.

The Cine DSLR is lightweight, compact, and easy to transport. It has a robust metal housing that dependably protects it from exterior influences. Thanks to the special Sachtler lubricated oil damping, filming is also possible in extreme temperature ranges, as the damping is not negatively influenced by them. With the Cine DSLR, Sachtler offers professional photographers and filmmakers alike an authentic, professional fluid head for filming with video-enabled DSLRs.