The DUO-CAPTURE EX audio mixer connects digitally to the iPad, at 48 or 44.1 kHz. 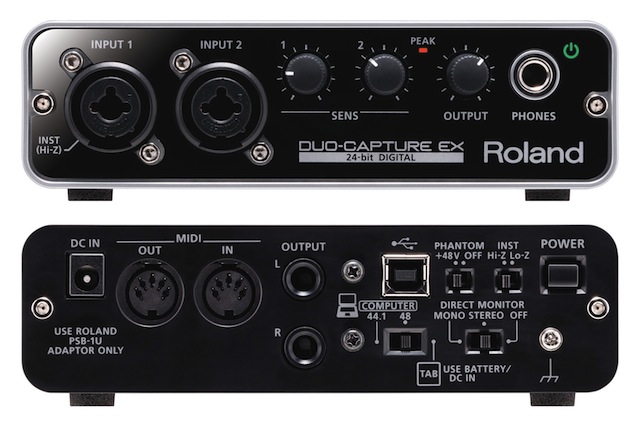 The US$199 DUO-CAPTURE EX from Roland (like the excellent hybrid microphone I’ve applauded in several articles and ebooks) connects digitally to the iPad, selectively at 48 kHz (for video and very specialized audio applications) or 44.1 kHz (for general audio applications). This practice fortunately bypasses the iPad’s analog circuit and uses the same high quality VS microphone preamps I have covered previously when reviewing two other Roland interfaces in 2011 (the OCTA-CAPTURE and QUAD CAPTURE).

Back in 2011, I published the following two reviews:

The new US$199 DUO-CAPTURE EX shares the same VS preamps as these two other, higher priced units, which are not marketed for use with the iPad.

Why the DUO-CAPTURE reminds me of the QUAD-CAPTURE

As I indicated in the QUAD CAPTURE article from 2011, its name is deceiving since the QUAD-CAPTURE (US$349 list/now US$234 street) has only two balanced microphone inputs via XLR/TRS (tip/ring/sleeve) connections. The “quad” name implied —at least to me— implided that it would have four such inputs. The QUAD-CAPTURE does have two other inputs, but they are not for microphones; they are not analog, but digital (coaxial), together with MIDI i/o. The QUAD-CAPTURE physically looks very similar to the new, lower-priced, DUO-CAPTURE EX and shares the two balanced XLR/TRS inputs, as well as the MIDI (but not the coaxial input). Both products also offer optional 48-volt phantom power, although all of my testing with them have been with dynamic microphones which don’t require phantom power.

Where the new DUO-CAPTURE EX differs: iPad compatibility and more

In addition to the iOS compatibility, the DUO-CAPTURE EX also works with more conventional computers (Mac, Windows) via USB. However, this article is more focused on its use with iPads.

Confirmed 48 kHz: How I tested the DUO-CAPTURE EX and proved that its documentation underestimates its capabilities

I tested the DUO-CAPTURE EX with my friend María’s 4th-generation iPad using the renowned FiLMiC PRO app (which fortunately added 48 kHz audio capabilities back in 2012, as indicated in this article: FiLMiC Pro 2 can finally record correct 48 kHz audio!). Just as with the wonderful hybrid microphone I covered in the following articles and in ebooks (details on the ebooks at the end of this article):

iPad-compatible audio devices which offer both 44.1 kHz and 48 kHz use software negotiation set within the capable 44.1/48 app to determine which sampling frequency it should use in their internal A>D (analog-to-digital) converter. Just like the hybrid microphone covered previously, the DUO-CAPTURE EX gracefully complied with the software’s request for 48 kHz (despite the DUO-CAPTURE EX operator’s manual error, which incorrectly states that the device doesn’t support 48 kHz when in tablet mode, since it does, at least with the 4th generation iPad). When in 48 kHz mode (the only proper way to record audio for video), FilMiC PRO indicated to us that it was receiving 48 kHz from the Duo-Capture EX and created 1080p H.264 video files that we later verified that indeed had 48 kHz “stereo” audio. I write “stereo” in quotation marks, because most often, video producers actually use the “stereo” signal to record two independent mono signals which we later separate and use as such when editing. The DUO-CAPTURE EX offers live monitoring via it’s built-in 1/4-inch stereo output for headphones. When the monitoring switch (which is located on the rear of the DUO-CAPTURE EX) is set for Stereo, you’ll hear each microphone connected, one in each ear. When set for Mono, you hear the combined sound. This only affects monitoring, not recording.

María interviews people in two different modes. In one of the modes, she uses an Audio-Technica BPHS1 (see: Audio Technica BPHS1 broadcast headset with dynamic mic: review + comparison) together with a popular handheld dynamic microphone. Complete details, photos and test recordings to be forthcoming in upcoming articles.

If you need to connect two balanced analog microphones to an iPad in the field and produce high-quality 48 kHz (or even 44.1 kHz) audio recordings (with or without video), I recommend the US$199 DUO-CAPTURE EX. It is easy to adjust, and it makes clean recordings, even from dynamic mics, which make any preamp work harder. A similar device from Tascam (the IUR2) is still pending in the United States, but I do plan to review it also when it becomes available here. I also plan to review the Avid Fast Track Duo soon as they send me one to review it.