We go hands on with the new creative.space //ROGUE PRO

Earlier this year we covered the announcement of the //ROGUE PRO. Recently we had a chance to test drive the unit in a production scenario. In fact, not only did we test it, we stress tested it as part of a new VM-based editing system. The TL;DR takeaway? The system is fast, intuitive, and doesn’t choke under pressure.

Building out a VM pipeline

Like many people in the industry during COVID, we’ve been looking at remote computing solutions for editorial. We quickly found that the compute (especially GPU compute) and storage specs required by editing workstations prove unreasonably expensive in the public cloud right now (i.e. Amazon AWS and Microsoft Azure). So, we decided to build our own cloud.

While VMs simplify network topology (1 x 10GbE ethernet can potentially service multiple virtual machines), we needed a reliable storage solution. That’s where the //ROGUE PRO comes into the picture. First, we connected the //ROGUE PRO directly to a VM host via a 10 gigabit connection, then threw several editors onto the VMs to try and break things.

The //ROGUE PRO was delivered in a well-cushioned box with a second padded box for the individual hard drives making up the main ZFS RAID array. With ZFS, the drives carry their identity with them, so they can be installed in the system drive bays in any order. While much bigger than its little brother the //ROGUE, the //ROGUE PRO is still reasonably portable even with the weight of the drives installed and could conceivably be used for event editing stations and the like. The desktop unit was also extremely quiet (unlike my other jet-engine of a blade server…) and could quite happily sit on or under a desk without disturbing the peace. DigitalGlue later informed me that this is thanks to a 30dBA ultra quiet graphene-coated solid copper CPU cooler.

The system has 4 network ports, two of which are 10GbE. Since one of the ports is configured for DHCP, I had no problems accessing the web interface for the //ROGUE PRO from any network. In fact, I moved the system between three unique subnets during testing and never had more than a minute or two of downtime while configuring for the new network. This is almost a moot point, since the creative.space active support means that one of their techs will guide you through any network system configuration that needs to be done. In addition, a dual-port 25, 40, 50, or 100GbE network card can be added in one of the open PCIe ports if more bandwidth is required. 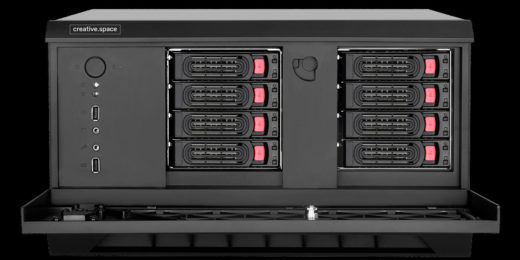 The test system came loaded with 96TB of SAS hard drives in a ZFS Z2 RAID configuration (allowing for 2 drive failures, the equivalent of a traditional RAID6), making for a total usable storage of 62TB. In addition, a 4TB NVMe was included for fast VFX and animation access to large data files like multi-layered EXRs, and a 500GB NVMe designed for housing a Resolve shared database, or for other caching purposes. And unlike typical NAS units that come with fast storage but underpowered CPUs, the system included a 12 core Ryzen 9, clocking in at 3.8 GHz base (4.6 GHz max boost), 128GB of DDR4 ECC RAM, and an additional 1TB NVMe system drive running on a PCIe 4.0 enabled motherboard. Two USB 3.2 Type-ports are included for easy ingest of media. Finally, an optional WiFi 6 802.11ax card offers the potential for high-bandwidth editing even in facilities where wired connections are impossible.

In terms of onboarding—in addition to the personalized setup consultation—DigitalGlue has made some nice, short videos to cover fundamentals of the various features of their creative.space software platform.

Overall, the performance was flawless. The only place we experienced any real playback hiccups were when editors were hitting the same piece of media at the same time. Even then the issue was limited to a brief stutter on start of playback, after which the caching system in the //ROGUE PRO seems to have taken over and smoothed things out. In fact, that seems to be a major feature of the system: From what I understand, the unit performs predictive caching and buffers media according to where you’re “headed.” In practice, this means that any fluctuations in data flow due to drive head seek times are smoothed out by a RAM buffer.

Of course, it all comes down to media choice and number of streams, so your final use scenario will  decide how many simultaneous users could be supported by a single system. It does seem like the techs at DigitalGlue have done a lot of internal metrics on performance, so a pre-sales conversation about your typical media load would help determine the best fit for your setup. 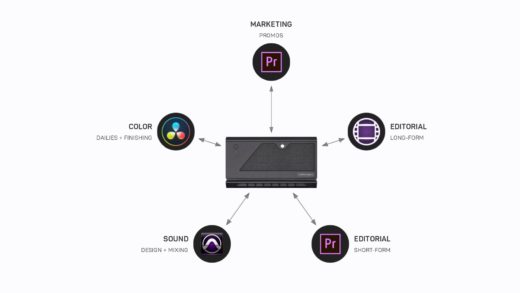 I’ve covered this in previous articles, but it’s worth drawing attention to the current state of the creative.space user experience. When one of my Linux servers breaks down, I usually anticipate 3 days of my time Googling the latest procedures for reinstalling a specific distro, service packs, services, and then sourcing deprecated drivers. So, to me, the perfect storage solution is one where I don’t have to think about it, it’s just there.

While the //ROGUE PRO very much lives up to that ideal, in situations where I do need to think about storage, the creative.space  UX appeals to me as well. It’s clean, uncluttered, and self-explanatory. It’s the iOS of storage: Just two or three steps to most tasks without needing to scour through a 300 page PDF to figure out how. And all the management operations happen on the server hardware via the responsive web UI, so my local workstation isn’t tied up doing file searches.

A couple of example cases: Let’s say you have a new freelancer come to work for you. You don’t know them, they don’t know you. They may be amazingly trustworthy, or they may have a side-business selling pre-release footage of your client’s movie.

With creative.space’s Access Control, you’re only ever four clicks from creating a new account for your freelancer. A couple more clicks limits their access to only the project they’re working on. That expensive campaign for Pepsi featuring Beyoncé? Invisible and inaccessible to said freelancer, regardless of where they log in from.

What if that same freelancer—who turned out to have strong personal integrity after all—accidentally deletes the entire show during a misguided effort to tidy up the server? Simply hop into the Spaces interface and select any and all files for recovery from the most recent snapshot.

A few of the many features added to the creative.space software platform since I last reviewed it are drag-and-drop templates for unified user folder structures, remote editing over secure VPN via proxies, and record-to-edit workflows.

Ultimately, real-world usability is the most important test of a system, and as mentioned above we found the system to perform admirably with multiple editors hitting the system at the same time.

But for those curious about numbers and stats, the pretty pictures below tell the story: The system operates pretty close to the hardware bare metal performance, with little perceivable overhead compromising data throughput.

Many editors are locked to the ISIS or NEXUS storage solutions provided by AVID. These expensive AVID-branded systems are a walled-garden approach that allow teams of editors to collaborate and use the same projects, bins, and media.

creative.space has a solution here as well. By integrating the third-party bin-locking tool Mimiq, AVID editors can get a similar collaborative experience using the //ROGUE PRO storage solution; the benefits of AVID-style collaborative workflow without the hardware premium overhead.

For a lot of us with fluctuating project workloads, the idea of committing to a long-term lease can be intimidating. It’s never pleasant to have another recurring monthly expense in a month where the books are empty of paying gigs.

In that context, one particular conversation with the DigitalGlue team struck me. As you would expect, DigitalGlue offers more favorable pricing to long-term service contracts. However, if after a year your circumstances change and you want out, you’re only on the hook for the difference between the rate you received for your multi-year agreement and the standard yearly rate, not the entire remaining multi-year service contract.

Now I’ve been through a few scrapes over the years and my typical experience has been a refusal of vendors to deviate an iota from the original terms of a service contract. So that kind of reasonable approach seems genuinely kind. It’s sad to think that this sort of “reasonableness” is uncommon in the modern age, but it really is. Kudos to the DigitalGlue team on this one.

Hopefully the reverse is true and during the contract you find yourself needing more storage. In that case, simply upgrade the service contract to new hardware without any penalties.

All up, we found the //ROGUE PRO to live up to its promise of fast, reliable (and affordable) storage. As I’ve mentioned in the past, for a lot of studios storage-as-a-service makes financial sense when you run the hard numbers of hardware depreciation, IT costs, 24/7 proactive monitoring, on-site spares, and yearly service level agreements. If you’re on the fence, be sure to check out product manager Nick Anderson’s 8 minute video where he argues the case for the creative.space ecosystem over traditional, owned solutions.