Here is my review of the Saramonic SmartRig+ portable audio interfaces, which handle two channels of audio, either XLR balanced or TRS unbalanced. Yes, they offer switchable phantom power for the former and bias voltage (“plugin power”) for the latter. They feature a pair of surprisingly powerful preamps (even for dynamic mics), ADC (analog-to-digital converters) and DAC (digital-to-analog converters) for playback. The ADC can be set to allow for discrete 2-track recordings or to combine the two into a dual mono signal, more appropriate for live broadcast or live-to-drive, with little or no post-production. There are models available for either USB-C or Lightning.

The two models are as follows:

To connect any combination of two microphones, which can be any combination of balanced XLR (with switchable 48-volt phantom power) or unbalanced TRS, where it always provides low-level bias voltage (“plugin power”) to the microphone and sends the signal(s) to the appropriate smartphone, tablet or even a conventional computer. You have individual gain control of each input, and the choice of recording discreet separate tracks or to combine the two, as explained in the introductory paragraph. 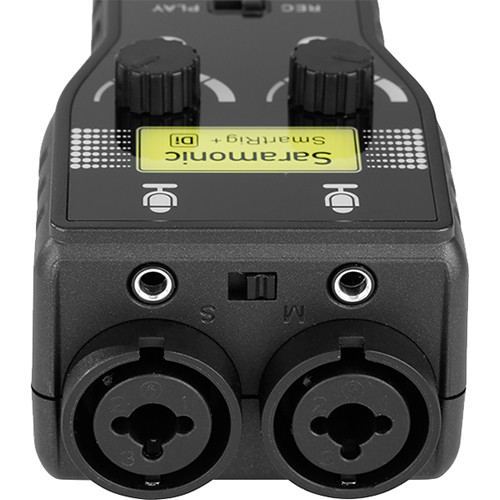 To set record separate tracks, set the switch to S (Stereo). To combine them, set it to M (Mono) as shown above. 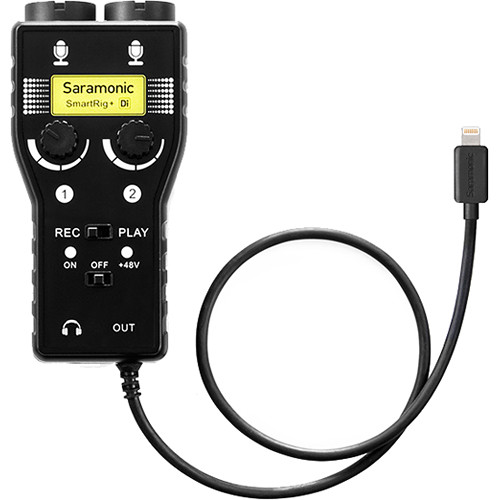 I am extremely impressed to see (and hear) such powerful and clean preamps at this price point, considering that most preamps at this price level require setting the gain between 90% and 100% with a dynamic mic to achieve a level of -12 dB which is generally our target conservative level for a raw recording, to leave head room for unexpected loud sounds like laughter or screams. In my test recordings which you’ll hear ahead, I only had to set the input potentiometer to about 50% to reach -12 dB with my normal voice level close to the mic. This is why I believe that the published maximum gain of +23dB is wildly innacurate. I would estimate it to be at least +60 dB if not higher. This is not the first time I see a leading manufacturer underrate its maximum available gain. The previous time was with the RØDE i-XLR which I reviewed in 2016, and accepts only a single XLR microphone. RØDE later clarified that their published maximum gain was only the first stage of amplification within the device, and I suspect that something similar must be happening with the SmartRig+.

The input pots (potentiometers) turn almost 360 degrees and feel very solid (as the entire unit does). However, the pointer is sadly the same black color as the rest of the knob, so there is virtually no contrast between the two and it’s very difficult to see. There are also no numbers in the surrounding area, but there is fortunately at least an indication as to which direction is higher and which is lower, which is divided up into four sections. I would recommend Saramonic paint the pointer on the knob white to make it more visible. Of course, until Saramonic does that, the end user can paint the pointer with correction fluid, commonly known in the US as whiteout/liquid paper, and in other countries as Tippex or Twink (brand names).

The SmartRig+ offers either latency-free monitoring when recording/broadcasting live or playback to hear sounds coming from the connected device. Unlike most other interfaces I have tested, the SmartRig+ cannot do both at the same time. You must move the switch between Record and Playback to determine what you hear in the headphones. I heard myself live through the headphones when it was in the REC position and did not hear sound from the device in that position. When I switched to PLAY, I heard sound from the device, but did not hear myself. Of course, there are apps that allow live monitoring, but that always has delay (latency).

As a result, the REC or PLAY situation is fine for self production, but does not allow for latency-free monitoring and also hearing the sound of another remote person during a remote call or when one is a remote panelist. In addition, using my favorite CB-1 isolating headphones (which are rated at 32 ohms, reviewed here, shown above), the output level in my headphones fortunately was acceptable when recording at -12 dB. There is no volume knob on the SmartRig+ so the level to your headphones when monitoring live is fixed. When in the PLAY setting (playing back from the connected device via USB-C), the playback volume level must be adjusted on the connected device (in this case, my Google Pixel XL running Android 10 and the updated Auphonic app, reviewed here for Android and iOS and then updated for iOS here). At the maximum volume of the phone, the level in my headphones roughly matched what I heard when listening live. As a result, you should make sure that your connected isolating headphones are 32 ohms or lower to hear an adequate level in your headphones. I see that the popular Sony MDR-7506 headphone is rated at 63 ohms, so it might not be loud enough when used with the SmartRig+.

The yellow Saramonic banner you see in the photo might make you think that it’s an LCD display. It’s not. It’s just a yellow colored Saramonic logo. There are no menus or level meters on the SmartRig+ so you must twist the pots (potentiometers) of the SmartRig+ and read the level in your connected device. I used the meter in the Auphonic app to adjust the levels to peak at -12 dB. Later I normalized them for -16 LUFS when exporting the separated signals from Hindenburg Journalist Pro (covered in many articles). 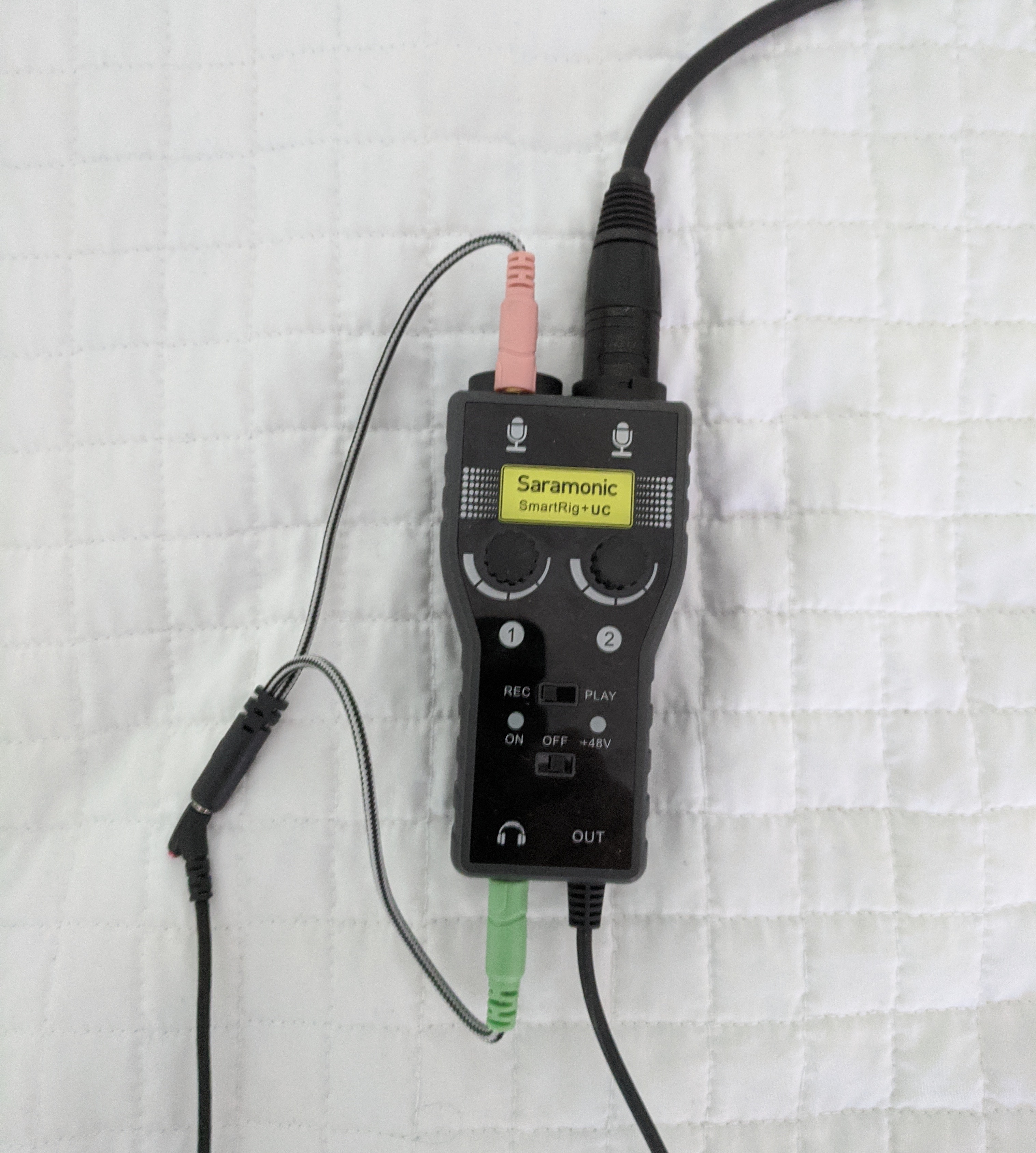 I connected one electret condenser microphone to input 1 via TRS, through a TRRS splitter (shown above, Amazon link). The red plug in the photo is the mic signal of the V-MODA BoomPro head microphone (reviewed here, shown below) feeding input 1. The green one feeds the headphone, in this case, the CB-1 from Status Audio. I connected a dynamic microphone to input 2, the headless Samson Q2U with the enormous Shure A81WS presidential windscreen (reviewed here, shown below).

I adjusted each to peak at -12 dB for the raw recording using the meter built into the Auphonic app. Later, I used Hindenburg Journalist Pro to trim and separate the two fake stereo channels into separate mono files. All published files are 48 kHZ uncompressed WAV. Please use wifi or otherwise unmetered data to listen.

Even if used with a dynamic microphone, the SmartRig+ requires the use of a 9-volt battery (not included).

Zero-latency monitoring for local use only

Because its level is just barely enough for 32-ohm headphones. It would probably be louder with lower impedance headphones.

You would have to do your sound check in the REC mode (while you hear yourself) and then switch to REC to hear the remote guest or host other panelists, thereby not having the full confidence.

Sound quality in its price range

Depending upon the version (explained at the beginning and below) the SmartRig+ from Saramonic is an ideal solution for audio (or audio/video) recording on a smartphone, tablet (less so with a conventional computer) when any combination of two microphones are to be used, especially when at least one of the mics is either a balanced dynamic or a balanced condenser mic requiring 48-volt phantom power. If you want to use the SmartRig+ with live broadcasts where it is necessary to hear a remote guest or host, you either sacrifice latency free monitoring during the broadcast or you must use some external IFB system to have both. The other minor limitations are surmountable via the suggested methods. To remind you, the two models are as follows: