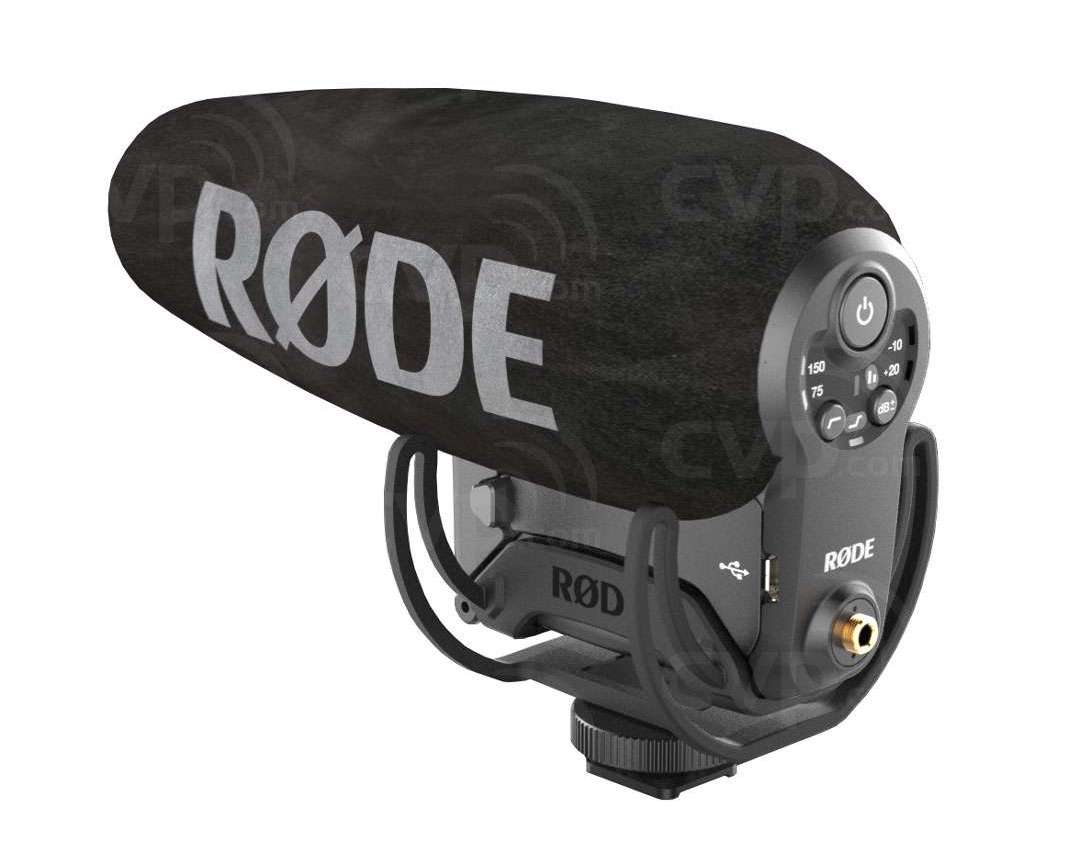 For many years, I have been reviewing several different types of microphones. However, this is the very first time I am focusing on the on-camera genre. One of the most popular one has been the VideoMic Pro from RØDE. Now the Australian manufacturer has taken it to the next level with the VideoMic Pro+. Ahead I’ll go over each one of the specific new features, including two videos from RØDE and four more audio/video test recordings shot with Sony PXW-X70. Finally, I include what I call “The Moral of the Story” regarding on-camera mics as opposed to their alternatives.

“A new addition to the best-in-market on-camera category. It is a true shotgun microphone designed for use with camcorders, DSLR cameras and portable audio recorders as a source of primary and reference audio.”

Even though RØDE didn’t mention it, RØDE VideoMic Pro+ will also work with mirrorless cameras and PTZ (pan/tilt/zoom) cameras with mic inputs too.

The VideoMic Pro+ (B&H link) terminates with a TRS (Tip Ring Sleeve) 3.5 mm plug. See my TS/TRS/TRRS/TRRRS: Combating the misconnection epidemic article (illustrated above) for more details about the different types of plugs.

Although a TRS plug often means “stereo”, the VideoMic Pro+ is not a stereo microphone. It is mono. It has a TRS plug for two reasons:

For the test recordings you will see and hear ahead in this article, we didn’t use any adapter. Instead, we temporarily removed the handle (with its XLR inputs) from the Sony PXW-X70 camcorder (Amazon link • B&H link) and mounted the VideoMic Pro+ directly onto the camera body’s onboard shoe. We then connected the VideoMic Pro+’s TRS plug directly into the Sony PXW-X70 camcorder’s own 3.5 mm input.

RØDE understands that with the stress of audio/video production, it is natural to forget to shut off a microphone when you shut off a camera. When camera operators forget to do that, the microphone (with built-in batteries) continues to draw power and suck the batteries dry even when not being used to record or broadcast live. That’s why RØDE invented an automatic function that can automatically shut off the microphone when the microphone stops receiving bias voltage (aka plugin power) from the camera, i.e. when the camera operator shuts off the camera or unplugs the mic. So whenever used with a camera that outputs bias voltage on the mic input, there is no longer any need to remember to turn the microphone off, since it shuts off automatically. Of course, there is a button to turn the microphone on and off manually, in the case of using the mic with a camera or other device that doesn’t output bias voltage.

The VideoMic Pro+ comes with its included LB-1 lithium-ion rechargeable battery, and alternatively can be powered continually via Micro USB. In addition, the VideoMic Pro+ can also accept AA batteries.

The VideoMic Pro+ has a built-in Rycote Lyre suspension system, which has been called “best in class”.

To compensate weak and noisy preamps (preamplifiers) in many cameras, the VideoMic Pro+ has a built-in pre-preamp, similar to other’s I have covered in the past, including Cloudlifter and Fethead (although those two are for balanced mics where the connected device offers phantom power). The VideoMic Pro+ offers up to +20dB of pre-preampfification. This allows setting the camera’s audio input level to minimum.

The VideoMic Pro+ has a built-in two-stage low cut (aka high pass) filter to reduce low frequencies such as rumble from traffic or air conditioning.

In addition, the VideoMic Pro+’s high frequency boost can raise high frequencies when desired, enhancing detail and clarity in the recording.

The following 4 test videos were shot by Francisco Javier Arbolí using his PXW-X70. As indicated earlier, we removed the PXW-X70’s handle with XLR in order to mount the VideoMic Pro+ directly to the camera, and connected the TRS 3.5 mm plug directly into the matching input on the camera. Audio in the camera was set to manual. Video was shot at 1080/29.97p at 50 megabits per second 10-bit 4:2:2 using Sony’s XAVC L códec with uncompressed audio. Later, I used Telestream Switch (reviewed in three articles here) to transcode to Apple ProRes 4:2:2. I then used Auphonic to normalize the audio to -16 LUFS (without any filtration). I edited with Telestream ScreenFlow 6.2.3, where I moved the video saturation to zero (to get the grayscale effect) and added each lower third, which is a PNG with alpha channel created externally.

I shot the still photo of Francisco Javier Arbolí with his camcorder and the VideoMic Pro+ using my Google Pixel XL (Amazon link) phone’s native Camera app in Android 8.0 (Oreo), and converted it to grayscale using the web version of Google Photos. Since the original photo is 4048×3036, I scaled it down to 1920×1080 in ScreenFlow with a slight crop.

The required audio boost to -16 LUFS during normalization of all clips was moderate with most, since the raw recordings made with the VideoMic Pro+ were approximately -21 LUFS. However the required boost from the only one made with the PVW-X70 camcorder’s built in mic was much greater, since the raw recording was -30.89 LUFS and that was already maxed out with the camera’s manual audio level adjustment.

VideoMic Pro+ flat with +20dB pre-gain in the mic:

VideoMic Pro+ with 75Hz low cut filter and +20dB pre-gain in the mic:

Conclusions and “The Moral of the Story”

Many people who haven’t tried them yet have an extremely high expectation for an on-camera mic. Those people then become disappointed until they finally realize that no matter how good or how directional a microphone is, the closer to the source the better. No on-camera mic can compete with a mic which is much closer to the individual speaking, be it:

On-camera mics are good as supplementary audio and/or when none of the above is feasible. With the VidMic Pro+ (B&H link), RØDE has made it become the best in its category, but it is still that category.