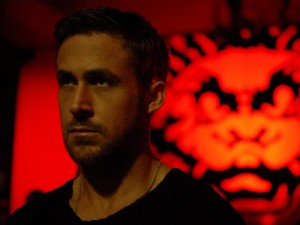 As the end credits roll on the new collaboration between Nicolas Winding Refn and Ryan Gosling (2011's Drive being the first), a title acknowledges a debt to Alejandro Jodorowsky, and with good reason. Reminiscent of the midnight master's 1989 Santa Sangre with its twisted mother-son relationship and emphasis on mutilation, Only God Forgives is a fetishistic fever dream.

Gone are the neon blues and oranges of the earlier film's nighttime Los Angeles, replaced by the saturated crimsons of Bangkok's seamy underworld. And released from the burden of a complex plot, Refn is free to create a hyperstylized mood piece that's certainly striking if not for all tastes.

Gosling plays Julian, an American expatriate in Bangkok who, with his brother, Billy (Tom Burke), runs an underground fight club and traffics drugs for their monstrous mother, Crystal (Kristin Scott Thomas). These men are damaged goods: Julian spends his time hanging out in gentlemen's clubs, sexlessly watching the prostitutes perform, while Billy has sunk to deeper and deeper levels of depravity, finally raping and murdering a 16-year-old girl.

Enter Chang (Vithaya Pansringarm), a mysterious authority figure, who orders the girl's father to do what must be done. And he does, literally bashing Billy's brains out. Upon receiving the news, Crystal comes roaring into town with blood in her eyes. Knowing she can't turn to ineffectual Julian for help, she hires a hitman to eliminate Chang. When that fails, she realizes her own life is at stake and has no recourse but to beg her son to man up and save her life. Julian tries to obey, but whatever resolve he might have had was long ago drained from him, leading to the inevitable confrontation.

Gosling's Julian is even more of a cipher than Drive's unnamed antihero. Completely under the control of his domineering mother, he seems to be drifting through life, placidly accepting his fate, whether being humiliated by Crystal or beaten to a pulp by Chang.

Thomas is a sight to behold here, especially for those accustomed to seeing her in period pieces. With her long, streaked hair and abundant eye makeup, she's a maternal nightmare, hurling obscenities while puffing on skinny cigarettes. It's easy to see where her sons acquired their nihilism — when Julian tells her that Billy was killed because he murdered a young girl, she shrugs him off, snapping “I'm sure he had his reasons.”

Pansringarm's Chang is the strangest character in the piece. A retired cop, he's a self-appointed judge, jury and executioner, holding the entire Bangkok police force in his sway. He also considers himself to be God, something that Julian, too, comes to believe.

Technically, the film delivers on its obsessions. Director of Photographer Larry Scott, shooting with an Arri Alexa, is perfectly in sync with Refn in bringing the director's vision to life. People and objects are arranged in deliberate tableaux; the pronounced violence is almost lovingly staged; and the saturated nighttime reds give way to naturally-lit outdoor scenes that are startling in contrast, as if for a brief moment the film has awakened back to reality.

The score by Cliff Martinez (who also provided the music for Drive) contributes immeasurably to the mood of the piece. It's always there, whether it's a major or minor player, adding to the tension; a musique concréte that would do David Lynch proud. Beth Mickle's production design also plays a major part in this visually-driven story, whether arranging a multitude of red lanterns across the ceiling of the karaoke bar Chang performs in or a variety of different-sized glasses on the restaurant table at which Crystal awaits the arrival of her weakling son. Strong stuff, but rewarding for those prepared for the subject matter, Only God Forgives opens Friday, July 19th, in selected theaters.

Kurt Gardner is a Los Angeles-based film historian and critic who reviews film, television, music and theater for Blogcritics.