A review of the DS-1 Double Strap by Black Rapid 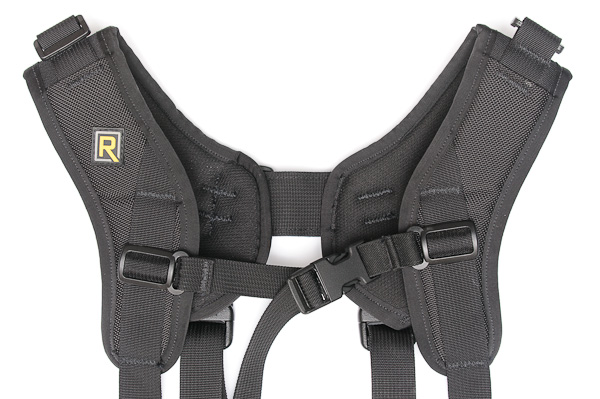 Let’s just get this out of the way. If you shoot with two DSLRs, you need the Black Rapid Double Strap. There is no better way to carry and shoot with two cameras for the professional photographer. Whether you’re a wedding shooter, a photojournalist, or just a photog who loves to go in with both barrels blazing, the Double Strap by Black Rapid demands serious consideration.

As a live music photographer, I use two DSLRs for just about everything. I see other shooters trying to juggle two individual cameras with the stock, branded straps that came with their cameras and they’re practically choking themselves with awkwardly hanging cameras and swinging lenses. If this sounds a little too familiar, you should do yourself a favor, skip this review, and just grab the Black Rapid Double Strap.

For anyone else, read on and I’ll tell you why the Black Rapid DS-1 is my personal camera strap of choice.

The design of the Black Rapid DS-1 is pretty simple on the surface, but packed with a lot of little details that add up to save your back, protect your camera gear, and make shooting with two cameras as effortless as possible.

Thanks to the relatively wide harness straps, the DS-1 is capable of carry even a pro-body and telephoto combo like the Nikon D3 and Nikon 70-200mm f/2.8 comfortably.

A cross-chest strap connects the Double Strap in the front and serves the same purpose as it does on backpacks – stabilizing the straps and helping center the weight.

Locks on the nylon straps act as a way to movement of the camera, stopping the carabiner from sliding past a certain point. These locks are useful for setting a specific rest point for your camera on the straps, which in turn keeps the straps well positioned on the body.

While the traditional camera strap connects to the lugs on your camera, this leaves your camera in an pretty perilous and awkward position when using large lenses. Sure, the top lugs are fine if you’re shooting with the small and light primes used on the first cameras that utilized these strap designs, but any f/2.8 zoom is going to severely unbalance your camera setup. With two bodies, the issue is magnified.

The Black Rapid system solves this by using the tripod mount for a single point of attachment to the camera, which minimizes swing and lets the camera point down with gravity, out of the way.

The point of connection between the DS-1 and the camera FastenR is a screw-lock carabiner on a swivel ring. While gravity and the tear-drop shape of the carabiner limits the possibility of accidentally dropping your camera, the screw-down lock on the carabiner provides a pretty fool-proof safety.

Two Straps In One
One of the coolest features is that the Double Strap can separate into two individual straps, thanks to a simple point of velcro on the back of the straps. While a rigid strip of velcro and nylon connects the two halves, the two are easily disconnected and just as easily put back together. So, the Double Strap is literally and figuratively two-straps-in-one.

The build quality of the Black Rapid Double Strap is excellent. And it should be if you’re committing two DSLRs and attached lenses to it. In the nearly four years that I’ve shot with the Double Strap, I’ve never encountered a single issue. After shooting literally hundreds of individual concerts and thousands of individual bands wearing this strap, there isn’t so much as a frayed edge to be seen.

In use, the Double Strap makes shooting with two cameras a breeze. While one camera is being used, the second camera simply hangs at one’s side.

Due to the way the camera is mounted to the strap, using the tripod screw at the base of the camera, a DSLR with lens naturally points down and out of the way. This contrasts a conventional camera strap that attaches to the lugs on the top sides of a DSLR, which can leave lenses sticking out or awkwardly balanced.

Switching cameras is as easy as setting one down to rest and grabbing the other. Thanks to the strap locks and the aforementioned natural rest position of the cameras with the Double Strap, there’s very little swing in the setup, which reduces bumps and wear on gear.

Since each camera has its own dedicated strap and the harness itself is secured by a chest strap, the Double Strap imparts the confidence to switch between camera bodies quickly and fluidly.

When using a larger lens like a 70-200mm f/2.8 with a dedicated tripod mount, I use the lens’s mount for the Black Rapid FastenR for the best carrying balance.

If you shoot with two cameras, do yourself a favor and buy the Black Rapid Double Strap. It’s the only camera strap I use. Yes, it’s $129.95 – yes, it’s worth every penny.