Now there is a better way to connect your pro XLR mic to your iPhone.

Back in 2009, I published an article called How to connect your pro XLR microphone to your iPhone. At that time, it required a special cable adapter that I had to order from the Netherlands and shipped to the USA, and that was a passive device which depended entirely upon the iPhone’s own internal preamp. At that time, it cost €30.28 (about US$39.74) including freight to Miami. Now a new solution has arrived, and it is called the iRig Pre. For approximately the same price, the iRig Pre pre-amplifies the mic signal for better performance, and also offers optional phantom power in case you want to use a condenser microphone.

What about a complete digital connection?

Many ProVideo Coalition readers will remember Record audio at 48 kHz on an iPad from a digital source? from June 2012, which described the use of a hybrid mic (the AT2005USB) connected digitally via USB, which completely bypassed the iPad’s preamp. Unfortunately, the iPhone (as of publication date of this article) doesn’t work digitally with that microphone, presumably because the iPhone (even the iPhone 5) doesn’t deliver enough amperage to power it, the way the iPad can. So although I used the exact same microphone for the tests for this article, I did so using its analog XLR output, not the USB output.

What is the iRig Pre’s description and reason for existence? 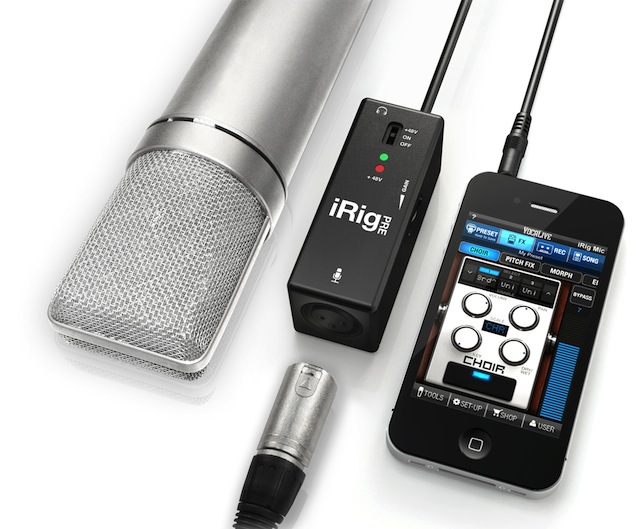 The iRig Pre is an inexpensive pre-amp with manual gain control designed to feed iOS devices like the iPad, iPhone, and iPod Touch with a mic level signal. Like similar devices from companies like JuicedLink and Beachtek for traditional video cameras, DSLRs, and DSLMs (although some of Beachtek’s units are passive, meaning they don’t contain an amplifier), the iRig Pre is a preamp to boost the (often very low) microphone level from a dynamic or even condenser microphone so that the one in the iOS device’s internal circuitry has less lifting left to do, and mainly has to concentrate on A>D (analog-to-digital) conversion. In addition, the iRig Pre handles the physical conversion from a balanced XLR, and optionally offers 48 volt phantom power for condenser microphones that require it. Finally, iRig Pre offers a headphone output for monitoring. However, I must clarify that iRig Pre does not contain a headphone amplifier: It simply routes the iOS’s own headphone output to your headphones. While you record, this capability is software dependent, since some iOS recording apps offer live monitoring, and others do not. Borrowing a term from the telephony world, sidetone is the term for hearing yourself via the system as you speak.

If you use a hybrid mic like the AT2005USB with an iPad, it will automatically give you sidetone since you’ll power it from the iPad via an Apple Camera Connection Kit (or Lightning to USB adapter with iPad 4th generation or iPad mini, which should also work, although I haven’t tried it yet). If you are using an AT2005USB via an iRig Pre with an iPhone, you can hear sidetone by sending electricity to the mic via USB, and plugging your headphone into the mic, not the iRig Pre. You can get that electricity over USB from a USB output of your computer. This configuration is officially supported by Audio Technica. Of course, I realize that if you are going to have a computer nearby, perhaps it may make more sense simply to make your audio recording on that computer, via USB instead of doing it on an iPhone or iPod Touch. However, I’d just thought I’d mention it, especially if you are also doing HD video simultaneously with your iPhone or iPod Touch, with a program like FiLMiC PRO, which recently added 48 kHz audio, as I covered here. I also tried powering the AT2005USB mic with a simple USB power supply. Although it illuminated the AT2005USB’s internal LED, it did not make the headphone amp work for some reason.

Thanks to Víctor Martorella of Voice Over Mart for the use of his iPhone 5 for the following test. By clicking here, you’ll be able to download an uncompressed audio file recorded from the analog (XLR) output of the AT2005USB via iRig Pre. The recording is logically at 48 kHz, which is the standard for digital audio for digital video. No equalization or compression has been applied; only normalization. I had planned to make a control recording using the original cable I imported from 2009 from the Netherlands, but unfortunately the iPhone 5 didn’t recognize its plug and continued to work with the internal mic only. My impression is that the iRig Pre with the iPhone 5 and its A>D converter. is very clean, although not quite as clean as the AT2005USB’s internal preamp and A>D (which can’t currently be used with the iPhone anyway).

If you want to connect a professional XLR microphone to an iPhone or iPod Touch, iRig Pre is a great solution for under US$40, whether you use a dynamic or condenser microphone. For the iPad, I would say that it also makes sense if you don’t have a hybrid mic like the AT2005USB which I have already covered in three articles (one, two, three) in ProVideo Coalition magazine and ebooks you’ll find at the end of this article. With a hybrid mic (or USB-only mic) that is already directly compatible with an iPad, you really don’t need the iRig Pre and are better off without it. However, if you want to use a mic like the AT2005USB with an iPhone (or an analog-only mic with an iPad), you’ll need something like the iRig Pre.

Of course, there are also USB mics that work with the iPhone digitally, but to my knowledge, there are only condenser mics like that (i.e. the Apogee MiC), not dynamic mics.

According to iRig Pre’s manufacturer, battery life is approximately 30 hours with dynamic microphones and 10 hours with phantom-powered condenser microphones.

Although the audio recording apps from IK Multimedia (iRig Pre’s manufacturer) offer nice features including low-latency sidetone (as explained earlier in this article), I can’t currently recommend them for video producers because as far as I’ve been able to determine as of the publication date of this article, their apps (iRig Recorder and VocalLive) don’t support direct recording to 48 kHz, which is the industry standard for digital audio for digital video. In order to make a direct recording to uncompressed 48 kHz on the iPhone 5 lent by Víctor Martorella of Voice Over Mart, I made the test recordings with FiRe 2 – Field Recorder, since it does support 48 kHz recordings, and fortunately worked perfectly with the iRig Pre. For more info about FiRe 2 – Field Recorder, see my article Record audio at 48 kHz on an iPad from a digital source? from June 2012. I have requested clarification from IK Multimedia, and if and when they respond regarding direct 48 kHz in their iOS apps (iRig Recorder and VocalLive), I’ll either update this article or publish another one. In the meantime, for audio-for.video production, I recommend you use the FiRe 2 -Field Recorder app, or for simultaneous 48 kHz audio with video, I recommend the latest version of FiLMiC PRO, which is now 3.0.0, and you must set it specifically for 48 kHz.

iRig Pre in an alternate reality: with your unbalanced camera

How does this compare with the Blue Mikey Digital that Adam Wilt recently reviewed?

Already I realize that many of you are likely asking how this compares with the Blue Mikey Digital that Adam Wilt recently reviewed here in ProVideo Coalition magazine, so I’ll write about that soon too.