Works for film folks too!

The BenQ SW270C is a color-accurate monitor aimed at photographers and web-based filmmakers (sRGB types). BenQ sent me it to review, so here’s that with some extra colorist stuff thrown in. In my quest for color accuracy, I’ve updated parts of my rig pretty regularly, and since I don’t quite have the cash for a Flanders/Eizo or similar yet, I’ve had to do my best with what I’ve got. Monitors like the SW270C sort of bridge that gap, so I was thrilled when they let me keep it. Ethics statement aside, here are the specs: 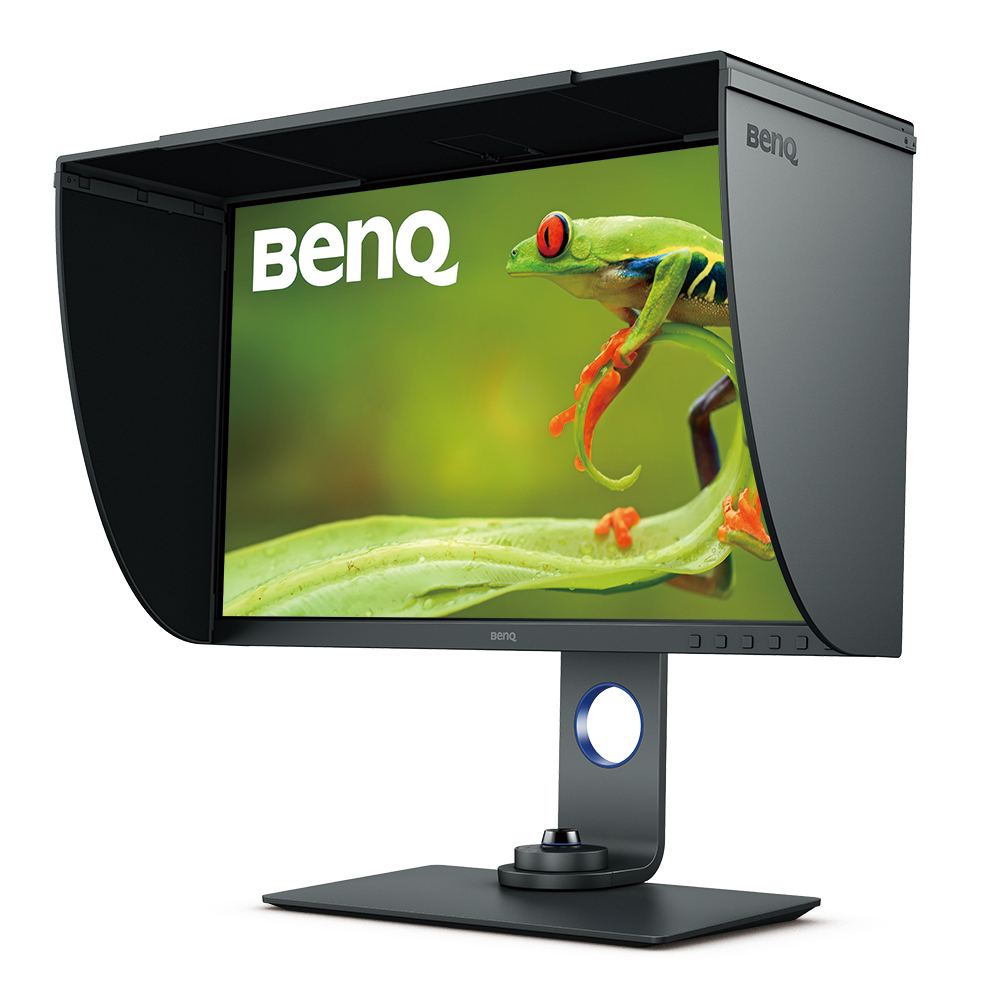 To start, the monitor comes in a VERY comprehensive and protective box with a calibration report for your specific monitor in a nice little sleeve, which you can check out at the bottom of the article.

The monitor itself has a thin bezel and looks almost identical to the PD2700U, which I like. It looks simple but has TONS of connections in the back so it doubles as a USB 3.1 hub as well. Speaking of USB, you can power it and use it as a monitor with one USB-C, like the Samsung I reviewed earlier. It also comes with the “G2 Hotkey Puck”, which allows you to scroll through your monitor’s menus quickly and program 3 hot keys to, for instance, swap your inputs.

If I had to describe the difference between 4K and 1440p, which this monitor is, I’d say it’s “Sharp vs Smooth”. Images on the SW270C look clean, almost vivid in comparison to my other monitor(s), and I can’t see any aliasing or distortion of any kind. The calibration report says it’s 99-100% uniform across the panel and I have no reason to disagree. On the PD2700U, I seem to perceive more detail but as it’s 4K, that makes sense.

Games and movies look fantastic on it, which should come as no surprise, and I do seem to see more colors when outputting from Resolve via my Decklink than on my main monitor, which is great. The DP-out from my video card looks equally as snappy. It also is capable of storing 16bit LUTs in the monitor itself, which is generally a feature reserved for more expensive panels.

I should probably do a color-accuracy article, but basically a Hardware LUT allows the monitor itself to do the correction instead of Windows/MacOS or your Video Card. Good stuff.

At the beginning of the year, BenQ sent me their 4K PD2700U to review which was a huge upgrade from my 1080p Dell Ultrasharp at the time, but for whatever reason I trusted that the Rec709 and sRGB modes (which I’d use most often) were “as-advertised”, covering 100% of each spectrum. After calibration, the panel looked great so I had no complaints. It wasn’t a monitor designed for color-accurate work, but it seemed good enough with those features. 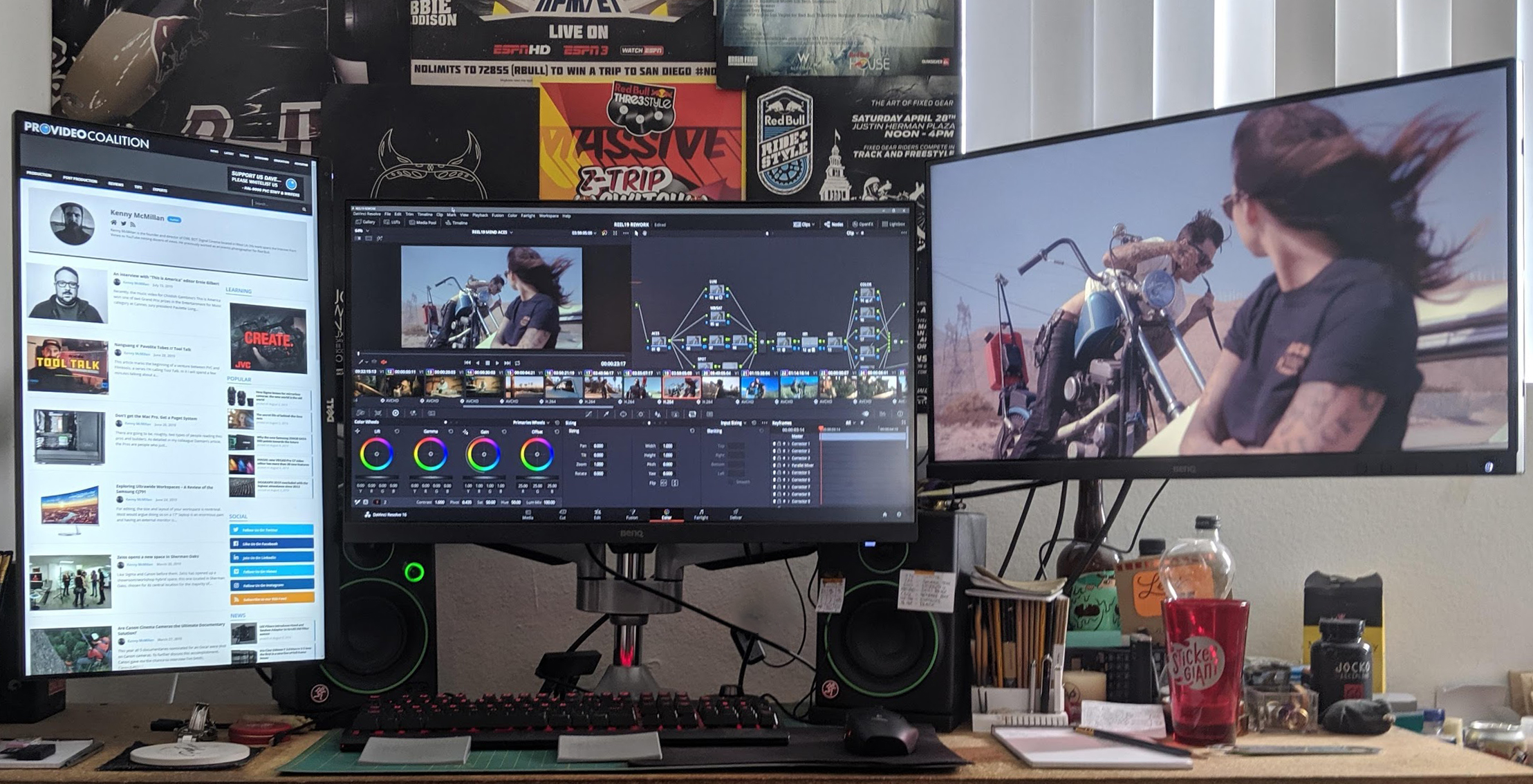 When I received the SW270C, with “Photographer Monitor” printed on the box, I finally had the good sense to actually pay attention to the report DisplayCAL kicked out when re-calibrating all three of my monitors (which includes the aforementioned Dell) and this is where I finally, somewhat embarrassingly, learned that “Covers X% of Y Spectrum” isn’t the same as “Displays X% of Y Spectrum” in every scenario. To Wit:

As we can see, the SW270C is actually accurate. Accurate enough for my use at this stage in my career as a freelancer who exclusively delivers to the web, anyway. As far as the Delta-E and RMS stuff… well honestly I don’t know what that means but I’m hoping you do and it’s something useful.

Now, the slight variation in coverage-vs-advertised could easily be a screw-up on my part, or maybe I have to have a certain setting toggled to unlock some extra percentage points but since I don’t know what I don’t know, I’ll take 99.6%. For clarity, I adjusted my displays based on what DisplayCAL told me to do, so I was on the “Custom” color modes having only adjusted the Red and Blue channels by one percentage point on the SW270C. Out of the box, I’d be more than comfortable using the various color modes that come standard on the display.

It’s difficult to describe the visual difference, and a screenshot or photograph wouldn’t do it obviously, but the best I can do is say that there’s more “depth” in the image, almost like saturation. The jump from the Dell to the SW270C is obviously pretty aggressive, but between the PD2700U and the SW270C, it’s slightly more subtle but still noticeable.

Using skin tones as our barometer, it’s easier to see or even notice the variations in people’s skin. For instance, splotchy skin seems more uniform on the Dell, which would lead you to not correcting it out, only to be discovered by the audience or (perish the thought) the client. I was going to show some examples and talk about something I’ve recently graded on this monitor but I’ve been under a bunch of NDAs recently so basically, I can’t. Oh well.

If you’re the average photographer/filmmaker looking for a great, accurate monitor you’ve found one. Potential problems arise with your system’s calibration to that monitor, and that’s why you need something like an i1 Display Pro* and DisplayCAL (by my recommendation) to make sure you’re getting the best out of your system. DisplayCAL also allows you to calibrate your Decklink/Resolve specifically to your display via some IP address connection trickery that’s above my pay-grade.

As in any business confidence is key, and having confidence that your image looks exactly how it’s supposed to is no different. For $800 at the time of this writing, this monitor seems like a solid investment on your path to color perfection. 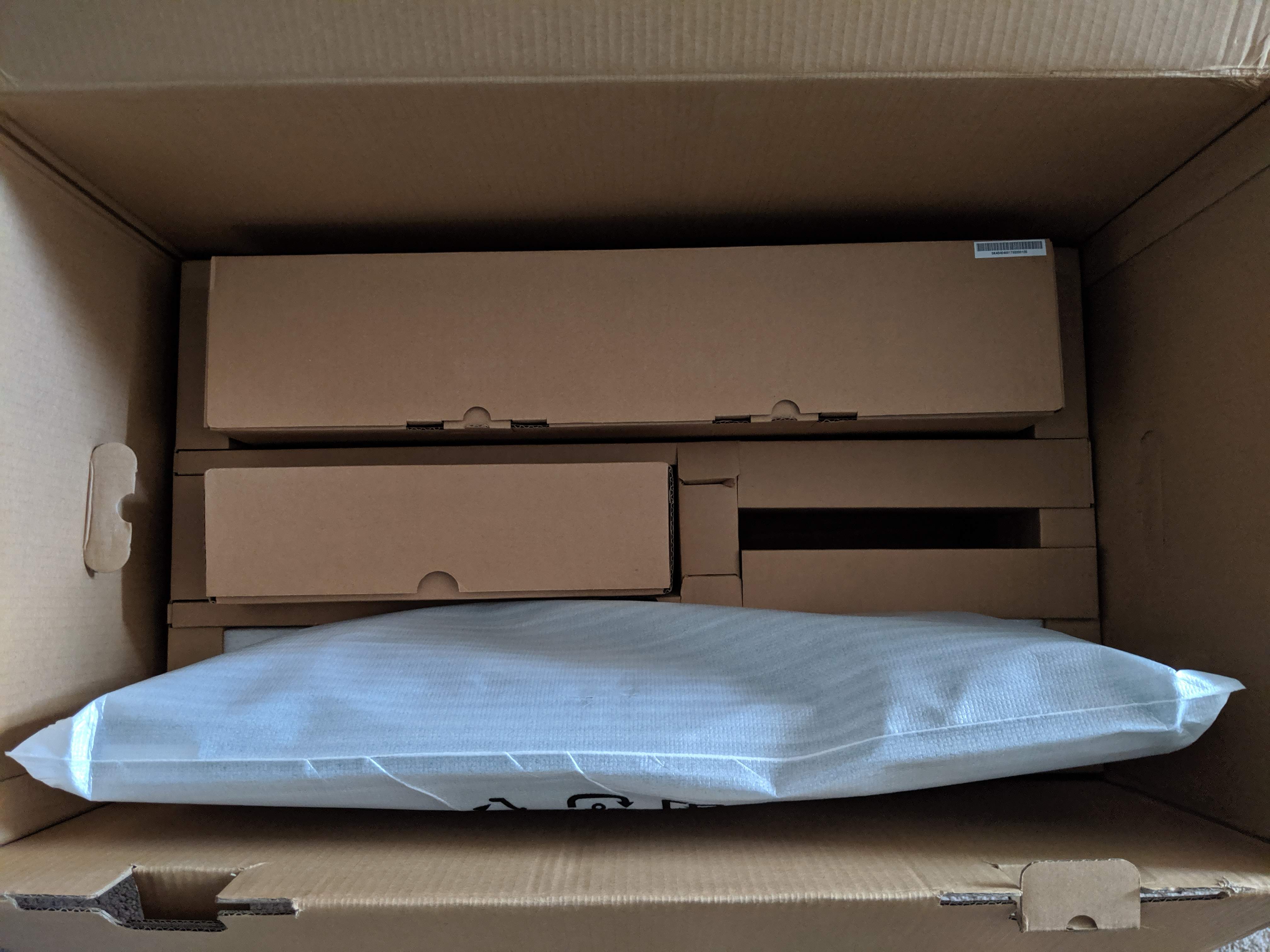 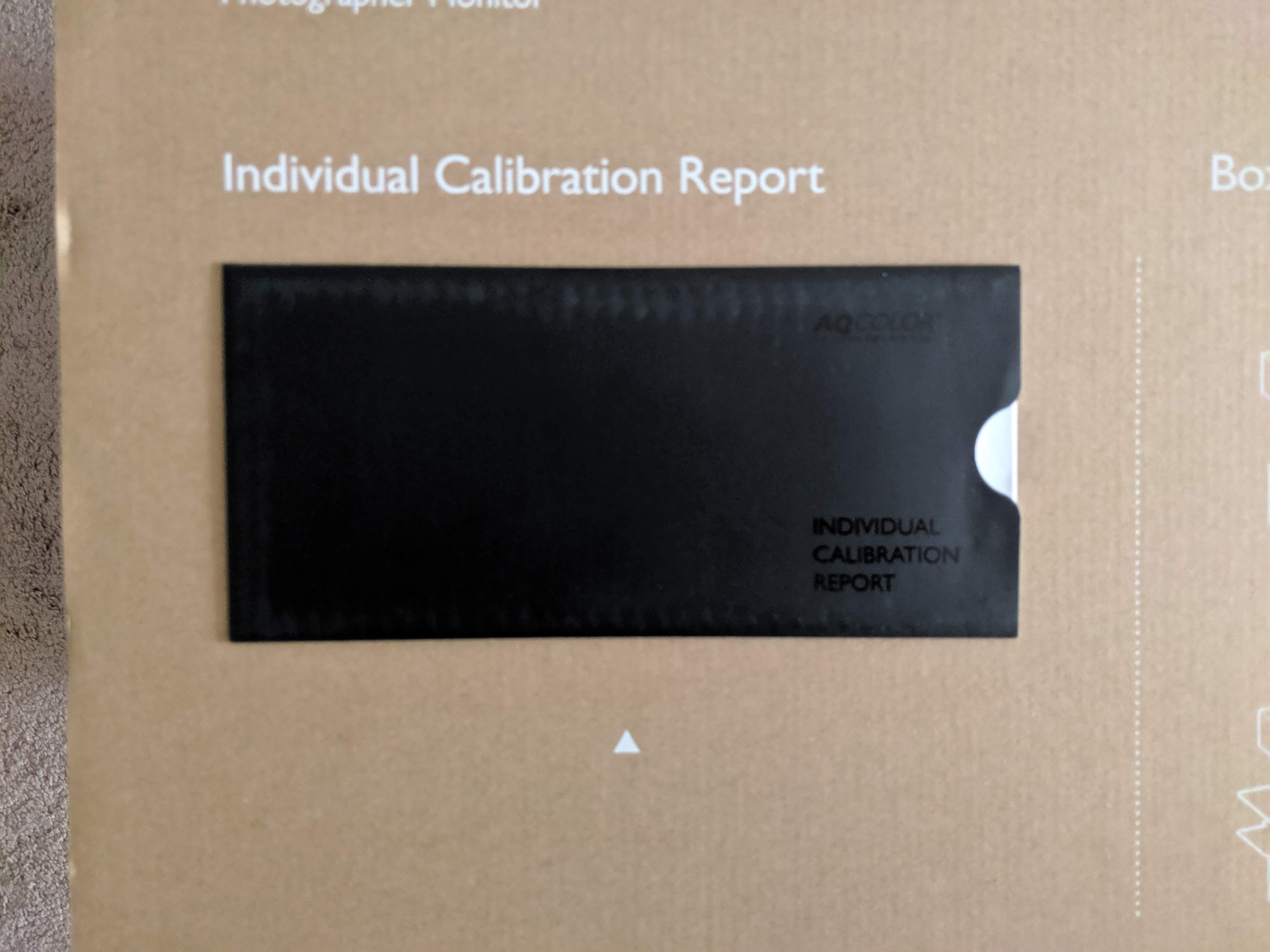 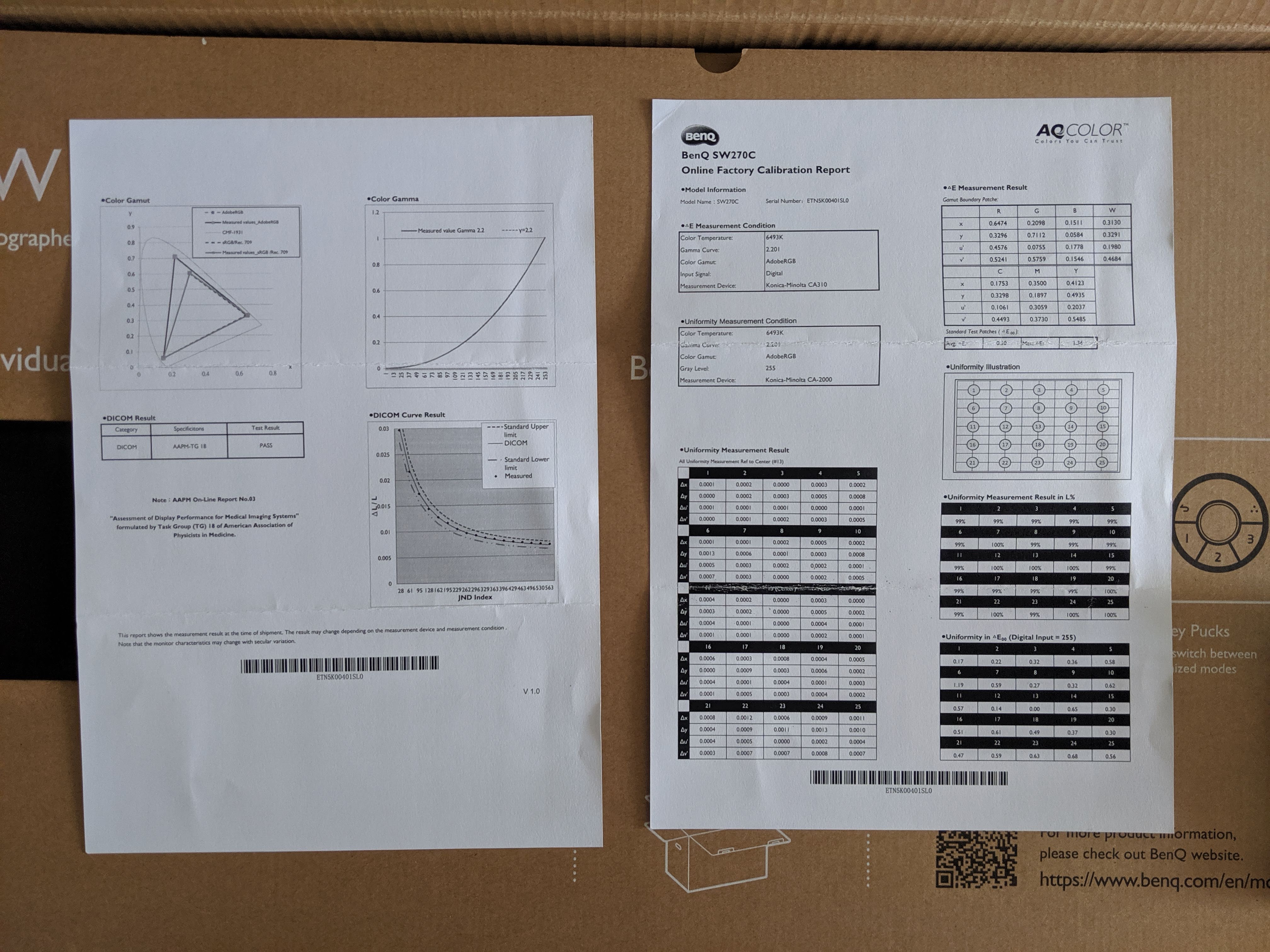 Now, something that I’ve learned through all this is that there’s 10-bit and then there’s “10 bit”, which is 8-bit with some magic dithering type behavior called Frame Rate Control to show more colors perceptively. This monitor, and many like it, is the latter. I was unaware of this technology, but according to BenQ, a “real” 10 bit would cost $1000+ so it’s a cost-saving measure for the consumer. Per Wikipedia, “FRC is a form of temporal dithering which cycles between different color shades with each new frame to simulate an intermediate shade. This can create a potentially noticeable 30 Hz flicker. FRC tends to be most noticeable in darker tones, while dithering appears to make the individual pixels of the LCD visible. This method is similar in principle to the field-sequential color system by CBS and other sequential color methods such as used in Digital Light Processing (DLP). 8-bit TN+film panels with dithering are sometimes advertised as having “16.2 million colors”. Some panels now render HDR10 content with an 8-bit panel using frame rate control.” There’s some extra reading you can do via Sematic Scholar if you want to know more.

While I can’t yet speak to the functional difference as I don’t have a true 10-bit monitor to use and compare it to, I can say that I don’t see the “30hz flicker” Wikipedia refers to nor can I see any downside to this method (and I do mean “see”). The PD2700U also uses this method of 10-bit trickery. This has sent me down a new path of discovery, so I’ll have updates for you as they come. Exciting times!