Two of the things I was looking most forward to at NAB 2009 were split between the Amazon ballroom at the Rio hotel and a corner of the south hall in the Las Vegas Convention Center. Those things were the Final Cut Pro User Groups SuperMeet, on Tuesday evening, and the Final Cut Pro User Groups SuperBooth that was on the show floor all week. The SuperBooth was particualrly unique among NAB booths in that it featured presentations from FCP users (incuding yours truely) at regular intervals throughout the week. 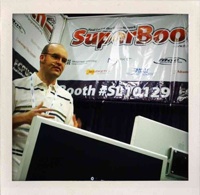 The SuperBooth didn’t have the size and flash of the biggest NAB vendors, it was a small presentation stage with 3 LCD screens for the presenter and the audience with around 25 chairs for those to sit and view the content being presented. The presentations were scheduled at some 40 minute intervals and lasting around 20 minutes each. While the schedule did seem to go a bit awry early on most of the presentations went on at or around their scheduled time. I caught several of them and most seemed to have a pretty good crowd. The SuperBooth was located on a corner and benefited from a lot of foot traffic as well. As I was setting up to begin my Wednesday @ 2:00 presentation on better use of your FCP keyboard and the Keyboard Manifesto it didn’t look like that many people would be there to listen but as it began about 6 or 8 minutes late the seats were almost full with a number of people standing at the back listening as well. I think one thing that made SuperBooth a great addition to the show was all of the diverse content that was presented there over the week. Sure it is all tied back to Final Cut Studio in some way but the topics were very diverse from both the technical to the artistic. I look forward to seeing how next year’s SuperBooth will take shape.

For years I had heard stories about the FCPUG SuperMeet and its “world famous” raffle, this year including over $100,000 worth of prizes. I had heard that it’s one of the biggest and most user-friendly of all the gatherings of not just FCP users but post-production people in general. And that’s exactly what I experienced. When you have a gathering of like-minded people buzzing on both the lack of sleep and a little bit of alcohol then pretty much any conversation you might strike up could be an enjoyable one. I talked about graphics while standing in the bar line and rendering while on the way to the bathroom. And while the vendors attending the SuperMeet certainly wanted to sell you product they had an easiness about themselves at the SuperMeet that wasn’t present on the show floor. I enjoyed casually talking plug-ins over a beer at the SuperMeet way more than I did over the hustle of people on the NAB show floor.

A big part of the SuperMeet is in the presentations and there was a wide variety present for 2009. Some were technical; there was FCP’s integration with the Adobe Creative Suite and the amazing Sonicfire music creation tool to name two. Others were creative; Playing for Change is a unique documentary that brings street musicians together from all over the world to virtually play together …via video. It was one of those concepts that was really a simple and unique idea that makes you say ‘why didn’t I think of that.’ The folks from JVC did a realtime demo and comparison of the GY-HM700 and GY-HM100 camcorders and their ability to capture to .mov QuickTime files. At the end of the JVC presentation JVC’s Craig Yanagi announced what many of us expected, JVC was going to give away one of the tiny HM100 cameras in the raffle. Some of the presentations were better than others and some presenters better than others but that’s always the case at an event like this. Either way there was something useful to take away from all of the presentations.

The real fun of the SuperMeet began with the raffle and attendees were eagerly anticipating the big prizes at the end of the night … at least I know I was. There was over $100,000 worth of stuff to be given away including the JVC camera, lots of hardware from Matrox, AJA and Blackmagic, a Fuzion edit chair and a $6,000 Gearnex GearHead, the pan/tilt control systems for lighter weight cameras that was a hit of the show. Michael Horton of the Los Angeles FCP User’s Group, emceed the event and ran the raffle. The way the raffle works is you get 2 tickets upon entering the venue (you can also buy more once inside) and if your number is drawn you come up and claim your prize. Unlike a lot of raffles the more excited you are when you win your prize and the more you scream and shout and act like a general crazy person the more stuff you might win to go along with your main prize. If it sounds silly at first I can tell you that it is very entertaining and makes the raffle go by much faster. You never know if the next winner is going to make a spectacle of themselves or if they will be a little subdued. And Mike sticks to his guns … if you don’t show your excitement about winning then you don’t get a many prizes as the ones that do. And part of the fun of any raffle is that anticipation of winning as they call out the number of the winning ticket and knowing you have as good a chance to win as anyone. I didn’t win anything in the raffle but I did have the first 4 numbers the same as the grand prize of the JVC camera so it was a brief moment of excitement. I heard the next day that the girl who won the JVC GY-HM100 was actually shopping for a camera so that’s as good a person as any to win. 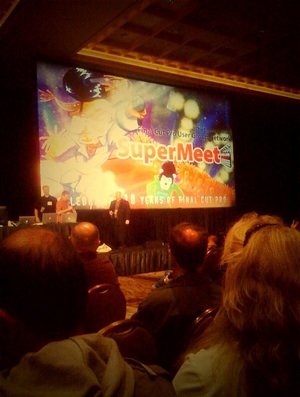 After attending the SuperMeet I got to wondering why Avid has never had anything quite like this? The SuperMeet isn’t put on by Apple but rather by users hosting an event around their software of choice. There are Avid user groups all over the world but to my knowledge they don’t sponsor and host events quite like a SuperMeet. Avid has had their own private events at NAB for years but the two I have attended have been more of just a party with company executives talking about product than users presenting stories about using those products. It would be interesting to see if there could be a similar event based around Avid and if it would be as successful. Avid does have user groups all over the world so it’s not that there aren’t people involved at a user group level. Maybe it’s sort of the same reason there seems to be a much larger culture of Final Cut Pro users on the web … they are younger and more enthusiastic.

Kudos to Mike and all of his team who put on the SuperMeet. It was a long but fun evening. The crowd left tired and happy. As we were leaving the SuperMeet a group of us stopped in to the first open restaurant we saw at the Rio to have some food. As we were leaving an hour later the crew that hosted the SuperMeet had sat down at their own table. I didn’t get to say hi to Michael but I did see that he looked weary and ready to pass out at any moment. But I’m sure he’ll be happy to do it all again at the next NAB, just as he has for all the years preceding this one. Wait … what am I saying about next NAB … there’s a SuperMeet in London on June 25!