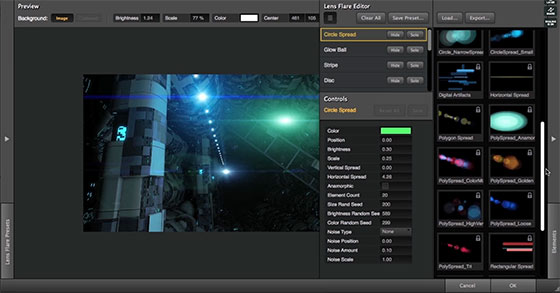 AE Scripts redesigned their site with a bright new interface and many operational improvements, and has some exciting new product announcements. The Pixel Bender Kernel Accelerator is native AE plug-in which will execute PBK code on the GPU (only kernel .pbk files are supported now, not graphs .pbg files so not all PB plugins will be supported). Also available now is Layer Repeater, a new script which is “like a mini-mograph for AE layers.” It’s reminiscent of some older 2D plug-ins and the 3D Layer Distributor script. For extra credit, see Motionographer’s interview with Lloyd Alvarez for the occasion.

Also announced is a September release of Plexus version 2, which looks to be another must-have upgrade. Here’s Lloyd on Pixel Bender and Satya Meka on Plexus 2:

To dig into KLF3, see the 3-part intro Getting Started with Knoll Light Factory 3 by Harry Frank.

Red Giant has a few other items on another recent release in, #69: Depth of Field with Trapcode Mir by Dino Muhic (noted earlier) and Episode 84: Trapcode Mir – Amplitude Mapping.

Need for Speed is commentary by Aharon Rabinowitz on fast OpenGL powered GPU plug-ins like Video Copilot Element3D, Red Giant Trapcode Mir, and Mettle ShapeshifterAE. Many AE users have been envious of Premiere rendering speed for several years, and hopefully the latest excitement will continue. By the way Pixar is open-sourcing OpenSubdiv, technology that is now in Maya; here’s Pixar Animation Studios Open Subdivision Technology Review from SIGGRAPH 2012:

Paul Conigliaro noted GM FoldLayers by Goodmotion, a free plug-in (in beta) that “allows you to easily create foldable groups to better organize the layers in your comps.” It somewhat satisfies the desires for a subset of features sometimes referred to in requests for layer folders or Ubertwirl ™. See also AE Scripts’ Isolate and especially Zorro-The Layer Tagger. Here’s a silent treatment on GM FoldLayers:

In Incorporating Titles/Logos into your footage with After Effects and MochaAE, Josh Weiss talks you through a logo replacement, and leaves the warp matching to you.

Jeff Foster, author of The Green Screen Handbook, is the host of the latest series on Splice Vine, August: Keying / Matting. See also FxGuide’s Art of Keying and The Art of Roto, both by Mike Seymour, and Greenscreen and keying resources, ‘Super tight’ garbage mattes in After Effects, and Rotoscoping tips on AEPortal archive. Here’s Best Practices in Software Keying, from Jeff Foster’s video2brain course Fundamentals of Compositing, Tracking, and Roto Techniques with After Effects:

[email protected] wanted to force rounding to scale/position as integers to avoid softening on text. Rendering in Draft mode disables subpixel rendering but also eliminates anti-aliasing on Text, so Harry Frank noted the Math.round expression, which is explained by Chris Silich in After Effects Expression: Snapping objects to whole pixels.

Film Riot posted Learn to Do a Slow Motion Gun Shot. For more gun thingies, see Muzzle flashes in After Effects, a new roundup at PVC.

Angie Tayor is offering 20% off the new course, and Todd Kopriva lists free videos from After Effects CS6 Learn by Video, from video2brain. Here’s an example; for more ideas see AE Help, The Brainstorm Tool at Motionworks, and AE Basics 31: The Brainstorm Function & Shape Layers by Andrew Devis:

Ronn Trovino (@rovino) shows you how to Recreate the Cinema Redux effect, a contact sheet of a entire film which was developed by Brendan Dawes and adapted by others, including François Vautier with a zoetrope effect on Blade Runner frames. Ronn’s version was done with Bridge, Photoshop and C4D, though it could have been finished in AE. A similar idea is Moviebarcode; to make your own see Movie Barcode Generator, Movie Barcodes, and others. Here’s Ronn, and Mr. Vautier with his impression of life flashing before your eyes before you die:

Benchmarking CUDA performance in After Effects CS6 has a list of Mac results.

@AdobeAE says that the After Effects interface font is Lucida Grand on Mac OS and Tahoma on Windows.