Here’s another summary of the last week or so of some news on After Effects tutorials, plug-ins, and scripts — it’s slower due to holidays, but there was news on a script for MIDI imports, some free projects, tutorials on type, shapes, and particles, and more.

Adobe Extended 20%-Off CS5.5 Upgrades Discount Offer to March, according to ProDesignTools.

Expression-Driven Captions in AE is a free AE project from Jake&Dan that creates “markers where you want a fade-in or fade-out of the caption. Every odd marker determines a fade-in and will hold a comment with the caption’s text, and every even marker will create a fade-out.” 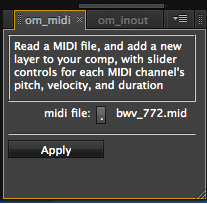 David Van Brink posted AE: Hello again, & MIDI, on the Onimo MIDI Panel, an After Effects script that reads a Standard MIDI file (.mid) and creates layers and keyframes corresponding to the notes and controllers in that MIDI file. Note that Van Brink was an engineer on the original QuickTime team and noted on QuickTime Music Architecture docs.

And in AE: Omino Python, All Free, Van Brink says that the Mac OS X version of Omino Python has been updated. You might find the latest installer for it (or not) and the other Omino After Effects plug-ins in the downloads section. Visit his blog for other resources like Pixel Bender filters. It’s not the first Python scripting has appeared for After Effects — Adobe once had a Python Plug-in demo in the SDK and Profound Effects had AE plug-in Useful Things that found fans in Trish and Chris Meyer, Jeff Almasol (with Profound Effects, now on the AE team), and others before it was sold to SONY.

VideoCreative.org posted How To Create A Dr. Who Time And Space Vortex, which using Trapcode Particular and Trapcode Shine to create the vortex, and an expression that drives the camera.

Not long ago, Harry Frank posted Creating a Rocket Ship Trail of Letters, guiding “you through the set-up and expressions required to emit a paragraph of letters from a moving After Effects layer”:

Andrew Devis continues his tutorials on Shape Layers with AE Basics 31: Brainstorm & Shape Layers and AE Basics 32: Creating a Motion Background with Shapes Layers. For more on Shapes, see Devis’ many other tutorials in this series and the mini-roundup Shape Layers in After Effects. Here’s Devis:

motion.tv announced the results of the Made with After Effects competition. The winner was Daniel Gies, who detailed his progress in his own tutorial series and then in Rig A Realistic Puppet, the newer 17-part series sponsored by Mettle at AEtuts. All three parties are to be congratulated for investing so much in a free series! That and other efforts were surveyed in Animate a character in After Effects here at PVC. Here’s the final product:

Lloyd Alvarez noted that Fit To Comp in AE doesn’t account for rotated layers, but you can use Fit2Frame, which fits selected layers of different sizes and pixel aspect ratios to proportionally to fill the Comp frame by giving you the choice of either cropping or letterboxing.

AE Scripts released Edge blending, a solution by erLab to build up panoramic projections with 2 or more projectors. This script will create the necessary comps for you render and be able to create this using standard video projectors.

The Verge Year in Review is comprehensive, if a bit much on mobile phones, and Lifehacker has a host of best of roundups.

Stash magazine’s Best of 2011 is up. Here are two notables, one by Patrick Clair on a computer virus and one on contagion: