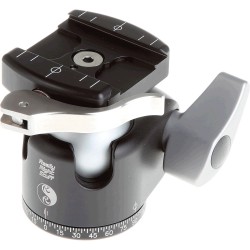 A solid ballhead is something that every good photographer should have in their kit. Just like buying a tripod, if you buy the right one it will last a lifetime because unlike today's cameras and lenses, technology of modern ballheads is relatively simple and changes very little. Instead it all comes down to manufacturing quality and machining accuracy to produce a perfect, solid platform for your camera. {C}

Really Right Stuff is an American company based out of San Luis Obispo in California and they are in the support business. Tripods, ballheads, L-brackets and lens plates; if it holds your camera then they make it. Every piece of CNC machined aluminium they produce is a work of art and all of their products are made 100% in the USA. Best known for their range of ballheads this is where I will begin, though in the future I hope to bring you guys some information on some of their other products because I recently had the pleasure of visiting the offices and seeing some of the new gear and it is fantastic! 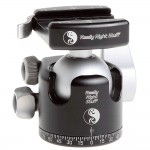 On to the BH-40 though. This is their mid-sized ballhead, sitting beneath the venerable BH-55 and above the BH-30 on their sizing scale. It weights in at 16.9 ounces and has a load capacity of 8KG. Enough to hold all but the absolute biggest lens/camera combinations, though they do not recommend using it for more than occasional use with something like a 300mm f2.8 or bigger. The head has three separate controls, one for adjusting the panning base, one to adjust the drag on the main ball and then a larger knob for releasing the ball. All the controls function extremely smoothly, even in the harsh winter conditions that I put my gear through. Unlike all the ballheads that came before it in my camera bag, this one locks rock solid no matter how hot or cold, wet or dry it gets. It just works, and that is what you need from a ballhead, total trust that it will hold your $12000 investment.

The head is available with a selection of different quick release clamps that are all designed to work with RRS camera and lens plates. RRS makes specific plates for almost all professional and semi-professional level cameras, as well as lens plates to fit those that have a lens collar. When I first purchased my BH-40 a couple of years ago I chose to have a screw-knob clamp, the B2 Pro II, because I preferred to have the responsibility of tightening the clamp on my gear myself. When I first got my hands on a quick release lever-clamp I quickly changed my mind though and switched to the small B2-40 clamp pictured to the right. With the camera specific plates, lever-release clamps work extremely effectively and are much quicker to work with. The screw-knob clamp was also a little more awkward to pack in my bag, whereas the smallest lever-release clamp, the B2-40, is much smaller.

I have been using this head for about 2 years now and it has become one of my very favourite pieces of equipment. Every time I find a new scratch in it's paintwork it makes me wince! Honestly, I baby this thing more than most of my lenses which cost 4 times the amount because there is just a special quality about it that you rarely find in things these days. At $400 it is no small commitment, but like I said at the beginning of the article if you get the right ballhead it will last you a lifetime, or at very least a career. I have mainly used it with a Canon 1 series body and either a 17-40 f4, or a 70-200 f4 IS lens and it is absolutely rock solid with that load, with the camera at any angle. I have also tested it with the 300mm f2.8 on a 1 series body and that did not exhibit any noticeable creep either over my short test. My tripod was the weak link in that area. A lot of people use their very highly regarded L plates on their cameras and I had one myself on my 5dMKII for a while. It certainly makes switching to portrait orientation a lot faster, but the downside is that it weighs twice as much as the regular plates and costs more than twice as much due to machining waste from cutting the thing from a single billet of aluminium. I found that for me it was better to revert to the simpler camera base plates and save a little room in my bag. Especially given that I actually don't use a tripod that often for my work in action sports. For landscape and nature guys I think the L-Plate is worth it though and definitely gives you a little more solidity in your setup when having your camera in portrait orientation. If you regularly shoot with the big guns like a 500mm or 600mm then you will want to take a look at the BH-55, in fact many dedicated landscape shooters use that head even with their smaller wide angle lenses. But they also make a BH-30 which makes a great option of you are traveling light with something like a Gitzo traveller tripod and it will hold a camera like a Canon 5dMKII and a wide angle lens with no problems.

If you are unfamiliar with Really Right Stuff I urge you to go and check out their website and order a catalog. Since being taken over by a new owner a few years ago they have been churning out new products at a frantic pace and I always return to their site every couple of weeks to check out their new offerings. Last year they also introduced a premium range of carbon fibre tripods which and they have recently added a brand new style of gimbal head to the lineup for the long lens enthusiasts out there. Everything I have had from them has been top notch and built to the most exacting standards. Currently they only sell their products through their own site which can be a bit of a disadvantage when it comes to trying things out. If you happen to live near their office in California though they have a great showroom there but honestly if you are looking for a do everything tripod head that will last a lifetime then you will not regret the purchase of a BH-40. Highly recommended.