AMD says its new graphics card, the Radeon Pro WX 7100, is the world’s fastest single-slot workstation GPU ready for VR. It’s one of a new family of fast cards. Discover them all. 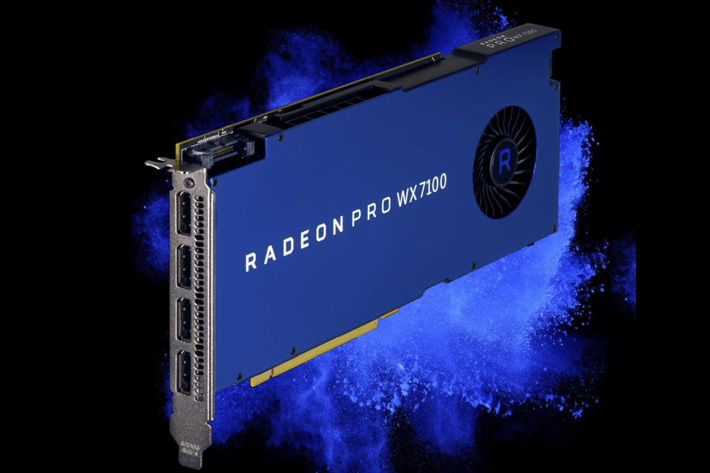 The Radeon Pro WX Series is AMD’s powerful, new workstation graphics solutions designed to meet the evolving needs of creative professionals and allow them to create “the art of the impossible.”

It all started with the new 15-inch MacBook Pro, in the end of October. AMD unveiled a new family of power-efficient graphics processors, Radeon Pro 400 Series Graphics, available first in the Apple computer. The new card delivers extraordinary performance and efficiency gains over the prior generation to fuel modern creative efforts from anywhere inspiration strikes.

To enable the thinnest graphics processor possible, AMD also employs a complex process known as ‘die thinning’ to reduce the thickness of each wafer of silicon used in the processor from 780 microns to just 380 microns, or slightly less than the thickness of four pieces of paper. Operating in a power envelope under 35W, the Radeon Pro 450, 455, and 460 Series graphics processors deliver spectacular energy efficiency and cool, quiet operation to speed through the most demanding tasks in popular creative applications.

“We couldn’t be more proud to have Radeon Pro 400 Series Graphics launching in the new 15-inch MacBook Pro, a notebook designed for performance and creativity,” said Raja Koduri, senior vice president and chief architect, Radeon Technologies Group, AMD. “Today there are millions of professional creators and designers, and a billion more who aspire to reach the next level. Radeon Pro 400 Series Graphics are a powerful and versatile creative technology that gives makers entirely new ways to create the art of the impossible no matter where they are.”

To celebrate the people behind the products, and the passion shared by makers of all sorts, AMD is launching a new program called “Meet the Creators,” bringing creators together and inviting them to share their work. Creators will have the opportunity to collaborate across a variety of fields, learn about new tools and techniques for their respective crafts, and have a chance to be featured in Radeon Pro promotional campaigns.

The “Meet the Creators” program will also explore how Radeon Pro graphics play a role in the creative process, from harnessing extraordinary graphics performance in today’s popular 2D and 3D creative applications, to using modern low-overhead graphics and compute APIs to accelerate rendering in today’s workflows. A part of that workflow is Radeon ProRender, AMD’s physically-based rendering engine planned for open source later this year, and supported via plugins across many popular 3D content creation applications including Autodesk Maya, and a beta plugin for Rhino. Bolstering the list of supported applications, AMD and Maxon announced that Radeon ProRender software will be available in a future release of Maxon’s powerful and intuitive Cinema 4D application for 3D modeling, animation and rendering, providing GPU-accelerated performance on Mac by leveraging Radeon Pro graphics and Apple’s Metal API.

The announcement of the Meet the Creators program was AMD’s way of paving the way for what was the next step: the new family of Radeon Pro WX Series of graphics cards, announced this November. The Radeon Pro WX Series professional graphics cards are, says AMD, “designed around a number of transformational inflection points that are dramatically changing the way content is created, including the rise of real-time game engines in professional settings, the emergence of virtual reality, the popularity of new low-overhead APIs (such as DirectX 12 and Vulkan), and the rise of open-source tools and applications.”

According to Ogi Brkic, general manager, professional graphics, Radeon Technologies Group, AMD, “our line of professional workstation graphics hardware, the Radeon Pro WX Series, is designed to empower the next-generation of exceptional content, intersecting new industry inflection points and enabling creators of all kinds to deliver the art of the impossible.”

The Radeon Pro WX Series professional graphics cards harness Polaris architecture-based GPUs featuring 4th generation Graphics Core Next (GCN) technology and engineered on the 14nm FinFET process. The cards have future-proof monitor support, are able to run a 5K HDR display via DisplayPort 1.4, include state-of-the-art multimedia IP with support for HEVC encoding and decoding and TrueAudio Next for VR, and boast cool and quiet operation with an emphasis on energy efficiency.

Here are the main specifications for the new family of cards: 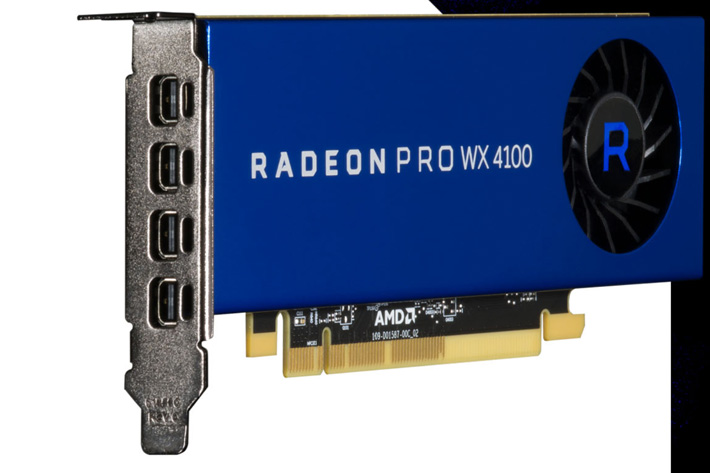 Available November 10 at US$399, the Radeon Pro WX 4100 graphics cards delivers the exceptional performance CAD professionals are looking for in a sleek and quiet small form factor. The Radeon Pro WX 4100 graphics card is the first low-profile workstation graphics card to break the 2 TFLOPS single precision compute performance barrier, over 2.4X the performance of competing cards in its class while consuming nearly identical amounts of power. With 4GB of GDDR5 memory and 16 compute units (1024 stream processors), users can drive four 4K monitors or a single 5K monitor at 60 Hz, a feature which competing low-profile CAD focused cards in its class can’t touch. 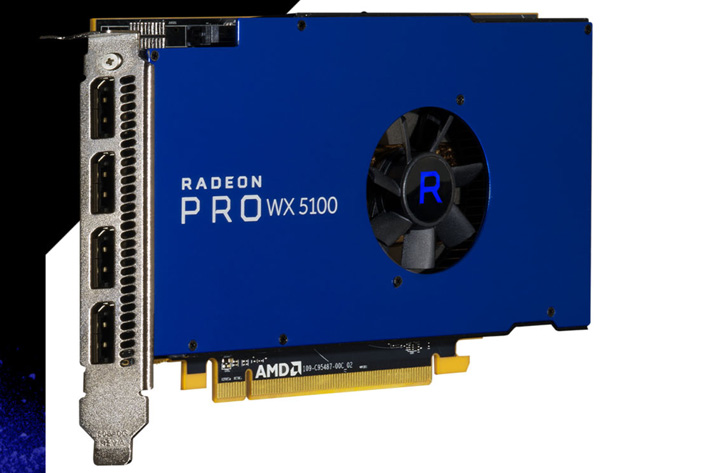 Available November 18th at US$499, the Radeon Pro WX 5100 graphics card is the fastest workstation card in its class, delivering up to a groundbreaking 3.9 TFLOPS of single precision compute performance while using just 75 watts of power. As game engines have become more commonplace in today’s immersive computing era, integrating themselves alongside traditional design applications and proprietary renderers, professionals are demanding more powerful solutions. The Radeon Pro WX 5100 graphics card delivers the necessary performance in spades, with 8GB of GDDR5 memory and 28 compute units (1792 stream processors) for 41 percent faster performance in Siemens PLM Software NX than competing cards in its class, and exceptional high-fidelity, high-resolution real-time visualization for key industries such as automotive and architecture. 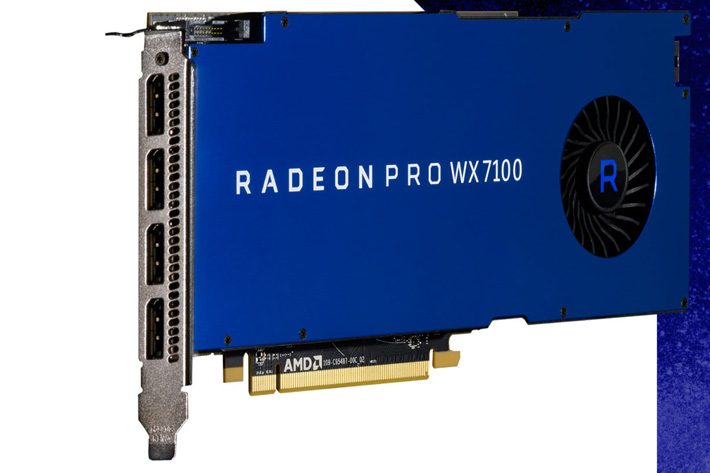 Available November 10th at US$799, the Radeon Pro WX 7100 graphics card delivers 5.7 TFLOPS of single precision floating point performance in a single slot, and is designed to meet the needs of professional VR content creators. Equipped with 8GB GDDR5 memory and 36 compute units (2304 Stream Processors) the Radeon Pro WX 7100 is a powerful graphics solution for high-quality visualization workloads, boasting up to 45 percent more performance than competing cards in its class in Dassault Systèmes SOLIDWORKS 2015. As VR usage continues to grow in design, manufacturing, media and entertainment workflows, the Radeon Pro WX 7100 delivers the performance needed to drive user experiences to new levels of immersion.