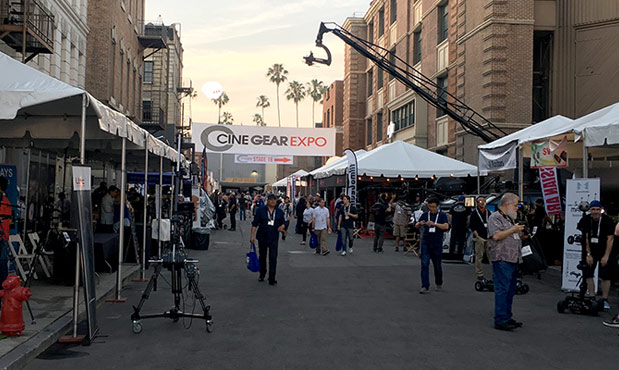 Cine Gear Expo 2016 fell on two of the hottest days in Los Angeles all year, but if you could brave the heat, you’d find a lot of great new gear that’s either just now shipping, or about to. Here are some of my favorites….

16×9, the U.S. distributor for Movcam, was showing the new Movcam Lens Control System, which is shipping in July in a 3-channel FIZ (focus, iris, zoom) configuration that offers many high-end features such as a large LCD screen, easy interface for creating hard stops, vibration motor in the hand controller to indicate stops, the ability to save lens configuration data per lens, and much more. A full 3 channel, 3 motor system costs $9995, but you’ll also be able to bring your own Heden motors, and Preston and Arri motor compatibility is expected down the road. 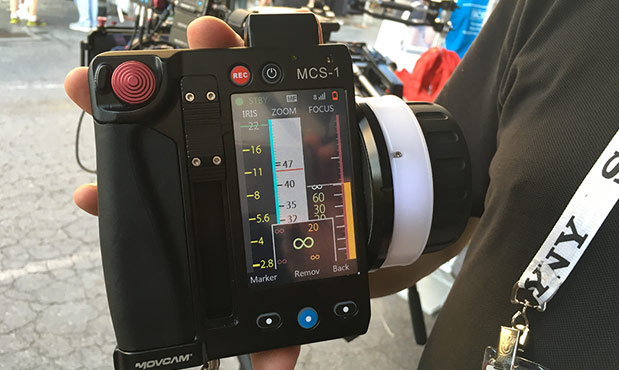 For two previous Cine Gears, I’ve excitedly covered a similar 3 channel system from Tilta, but that has turned out to be the biggest bunch of vaporware I’ve seen yet in video production, for years in a perpetual state of “shipping in 1-2 months!” The Movcam system genuinely appears real, with a single and dual channel version already shipping. But this 3 channel system due in July is the first to use Movcam’s new FIZ controller, with all the functionality I described above. 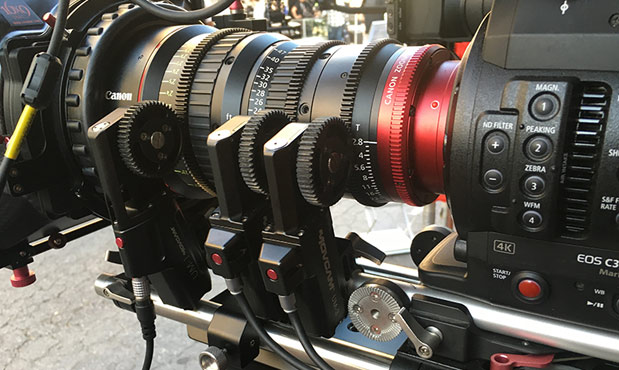 Movcam also has a Cine Distance Measure system on the way as well, which uses a laser to measure distance, and has an autofocus feature that can control a focus motor without other hardware. That system is $7700 for the laser, distance tracker hardware and one motor for standalone operation, but $5700 if you’re already incorporating it with Movcam’s existing motors.

2016 is seeing a lot of big battery makers such as IDX, Blue Shape and Switronix slimming down their batteries, but the best example of this trend at Cine Gear was the brand new PAG L90 Slim and PL150 batteries. The L90 Slim packs a very solid 90-watt charge into a tiny package that’s just 1.25 pounds, and 1.4″ thick. It feels almost like a toy in your hand, and is by far the most streamlined 90 watt battery I’ve come across. What’s more, its maximum amperage is 10 amps, which means it can reliably power high-amperage gear like big cameras and their accessories, or powerful LED lights like a Litepanels Astra. 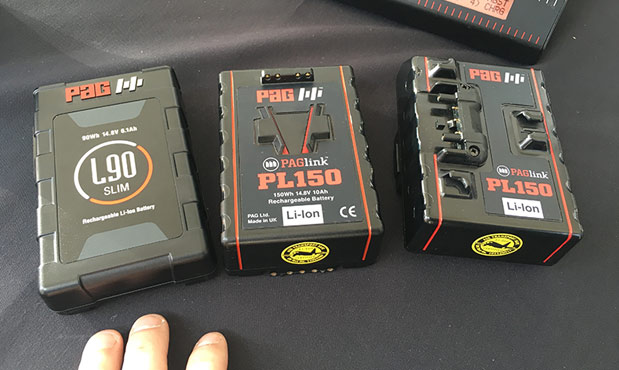 As for the new PL150 battery, it packs 150 watts in a case that’s only 1.7 pounds, which is the most watts per pound I’ve seen in a battery. The PL150 also includes PAG’s distinctive linking hardware that lets you connect two batteries together, so they act as a single massive 300 watt source (drawing up to 12 amps). 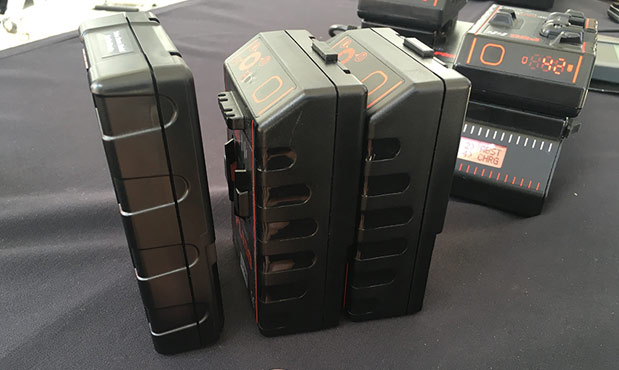 The batteries aren’t cheap , with retail prices of $595 for the L90 Slim and starting at $775 for the PL150, but street prices will hopefully be appreciably lower.

SmallHD is known for its small field monitors, but the company is finally branching out into larger sizes with its HDR line of production monitors in 17″, 24″ and 32” sizes.

The monitors first grabbed my eye when I came across them sitting out in the direct sun, without any kind of hood on, and yet their images popped off the screen. They looked great outside, and there’s a Backlight button right on the front so you can quickly tone down the maximum 1100 nit panel brightness when you use the monitor indoors. 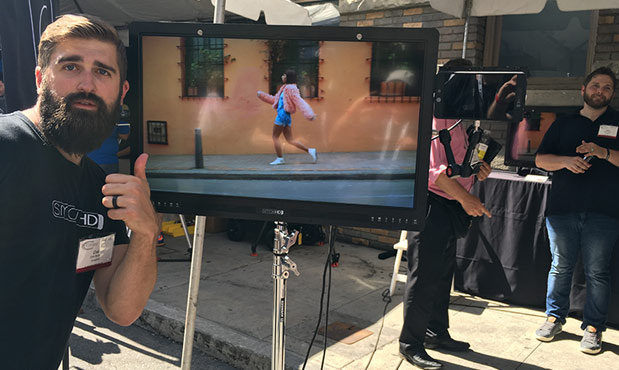 The other thing I liked about the HDR monitors were all the other buttons on the front, reserved for dedicated features that filmmakers always use, such as scopes, LUT selection, Input selection, an image capture feature, and 4 custom buttons. The monitors can also show two different inputs side-by-side, and are built like tanks.
Prices are definitely on the high side ($3999, $5499 and $7999), which is approaching what you would pay for Sony or Flanders monitors using exquisite OLED panels, but these are definitely monitors that are going to find some fans going forward. And if you don’t need the super-bright display, you can get a 17″ and 24″ Studio version for considerably less money. 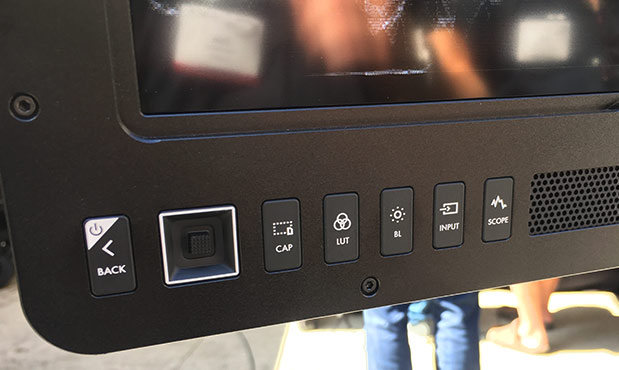 The $79.95 Lume Cube is a tiny, battery-powered, daylight-balanced LED light that’s small enough to hide anywhere (underwater included), light enough to attach to a drone, and with a maximum brightness of 1500 lumens, bright enough to actually be useful. 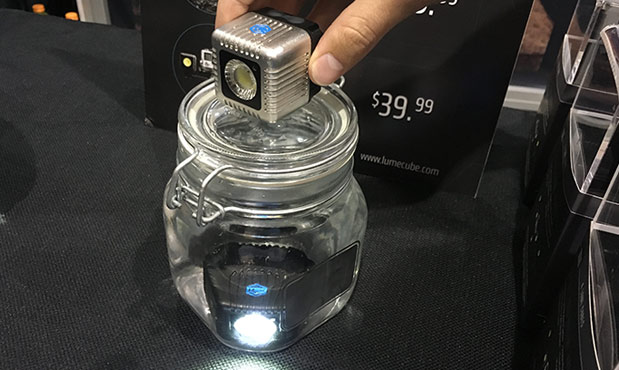 Not stopping there, however, the boxy little light has built-in Bluetooth, so you can turn it off/on, and dim it wirelessly with an iOS or Android app. The app can actually control up to five lights individually, or all on a single master switch.
You can charge the Lume Cube with a USB cable (or run it from wall power), and it will last for 30-40 minutes at full brightness.  A tungsten gel and diffusers are in the works, too. 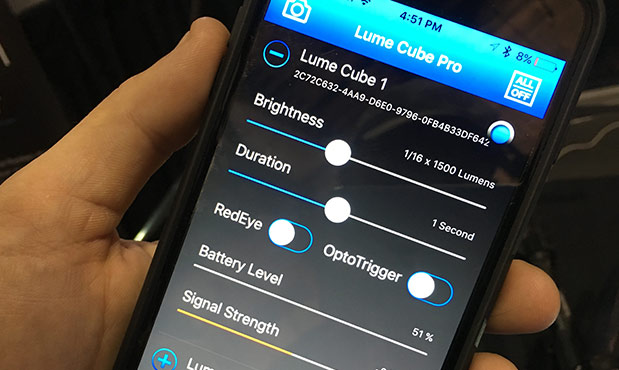 I had a chance to talk to Paralinx, my favorite wireless video company, about an upcoming firmware update for its current lineup of wireless transmitter/receivers, including the new Paralinx Ace, the Arrow X and the Tomahawk.
Firmware updates aren’t usually anything to write home about, but this one will update Paralinx hardware so that anyone with a Teradek Bolt Sidekick receiver (the universal receiver that can work with any Teradek transmitter) can also connect to a Paralinx transmitter. For instance, an AC with a Sidekick can now show up on a Paralinx set, and still be able to receive video from Paralinx gear.
The firmware update widens the world a bit for both Paralinx and Teradek Sidekick owners, which makes sense since both Paralinx and Teradek are now owned by Vitec. 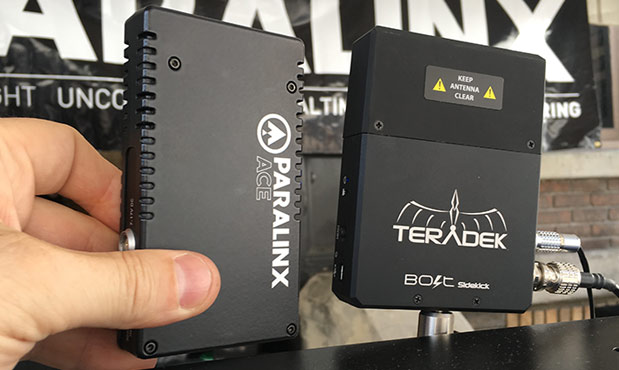 Zacuto has the best third-party EVF I’ve seen in the Gratical HD (see my review here), and now it’s introduced the Gratical Eye, which has the same great optics and imaging tools as the HD, but at a lower price and with a smaller, lighter body.
The Eye feels like a tennis ball with an eye piece attached, is only 14 ounces, and can be easily mounted to practically any EVF arm you own (Zactuo’s arm, Wooden Camera’s arm, etc.). 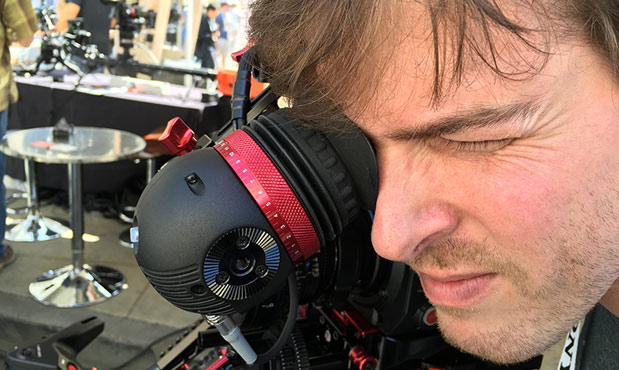 The OLED screen inside is sharp (1280×1024 pixels), with solid color saturation and is just the right size so your eye doesn’t have to swivel around to check the corners of the image. And it gives you a wide assortment of tools like a waveform monitor, vectorscope, false color, peaking, and 4 programmable buttons (among other things).
At $1950, the Eye is $500 cheaper than the Gratical HD, but for the lower price and smaller size, you lose the HD’s ability to run from an external Canon battery (the Eye only takes power from a p-tap) and you also lose all support for HDMI, as well as an SDI output for daisy-chaining.
Still, for camera rigs using external batteries, the Eye looks like a great option.

LiteGear was showing two new updates to its popular LiteMat system of thin, low-weight, low-power and bi-color LED panels. The LiteMats come in a variety of sizes that dwarf the typical 12×12″ panels that most LED fixtures use. For instance, LiteMats’ smallest panel (which they call an “engine”) is 9.5×19”, but the company combines multiple engines into much bigger sizes, such as 9.5×38”, 19×19”, or 38×38” and so on.
This means you can get the low heat, low power and dimming benefits of LEDs with the big source benefits of Kinoflos (LiteMats have a variety of diffusers and light-shaping tools available too). And, even a large fixture like the 9.5×38” LiteMat 2L weighs about 4 pounds, so it’s easy to hang or even tape to a wall. Prices are also lower than typical LED kits, with a 19×19” kit costing about $1500, and a massive 38×38” kit at just over $2000. 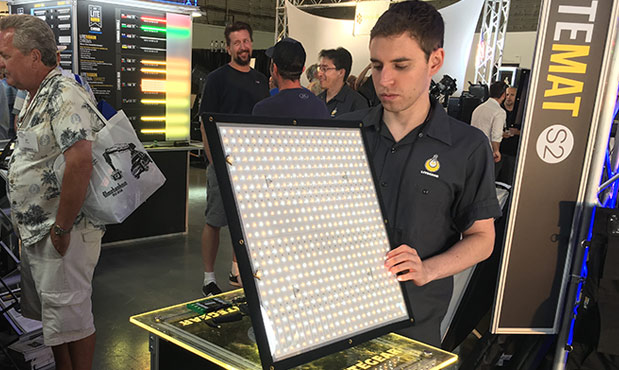 At any rate, LiteMats have been available for about 13 months, but LiteGear was showing a new Series 2 (S2) line that ships in July and features slightly bigger engines, with 40 percent more brightness per engine, and a CRI rating going from 95 to 97. A Plus system will be coming in Fall 2016, as well, and that’s a full 100% brighter than the original LiteMats, runs at 24 volts with more robust power connectors, and has a couple of bonuses like handgrips built into the frame.

Gimbals were hot items for the last couple of Cine Gears. For 2016’s show, I didn’t notice anything too exciting in gimbals themselves, but there were some cool products that make gimbals easier to handle.
One example was the Ready Rig GS, which is a $1999 vest and carbon fiber arm system that takes the weight of a Movi or Ronin gimbal off of your arms and distributes it to your hips. The Ready Rig has been enjoying good word-of-mouth since it shipped in 2015, but it’s being accessorized this summer with new ProArm extension arms ($699) that can move the gimbal another foot or so away from your body to give you wider range of movement. The extension arms also make it easy to mount a small monitor on an arm instead of your gimbal, which should help keep the monitor visible even when you hold your rig high or low. I’m looking forward to doing a review of the Ready Rig and its new ProArm system in the next month or so. 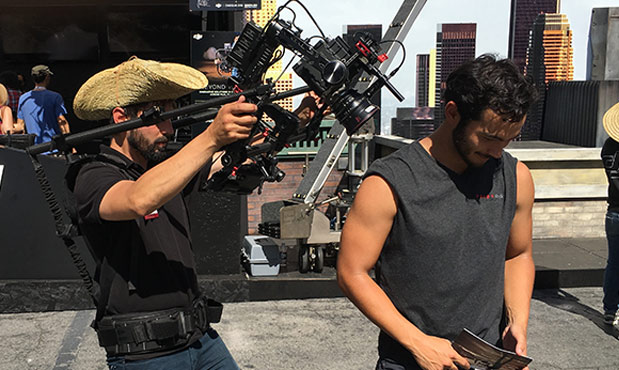 Also at Cine Gear was what may be the Rolls-Royce of vest and arm systems: the $7500 SlingShot from Walter Klassen FX. I had never seen it before, but it was demo’d by Sam Nuttmann, who is one of the most experienced and busy Movi operators in the business. The SlingShot looks a bit like a Rube Goldbergian-spider-something-contraption, but that gives it amazing range of movement (up, down, side-to-side) and apparently can all-but-eliminate the vertical bounce that creeps into gimbal shots. Sam also credited the extreme comfort of the SlingShot’s vest (designed based on years of experience with Steadicam vests) and its ability to distribute weight in all the right places. 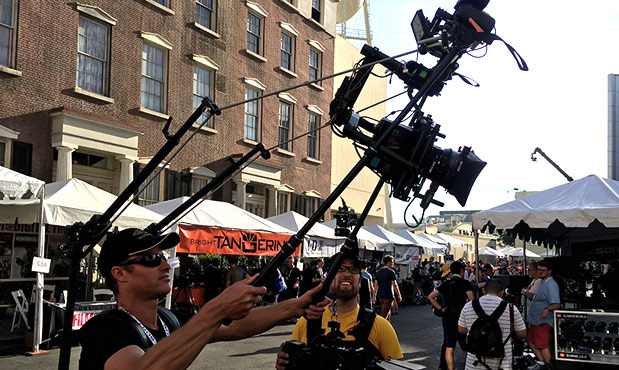