Zacuto’s Gratical HD EVF Sends My Alphatron Out to Pasture…

For the last few years, if you wanted a solid electronic viewfinder (EVF) for your DSLR or video camera, there was largely one choice that offered solid quality and a decent price: Alphatron’s EVF-035W, which you can still get for around $1,100 new.

I see Alphatrons frequently in the field, and see them spec’d a lot on rental requests too. I also own one myself…and thought I’d be sticking with it for the foreseeable future, even when Zacuto announced its new OLED-based Gratical HD, with all its fancy-pants features.

An OLED screen, good dynamic range, sharp resolution, customizable LUTs, long battery life…the Gratical sounded great, except at $3100, it also cost almost 3 times as much as my Alphatron! So I didn’t give the Gratical much more thought….until I had a chance to finally try one out on a job about 6 weeks ago.

And now I own a Gratical. 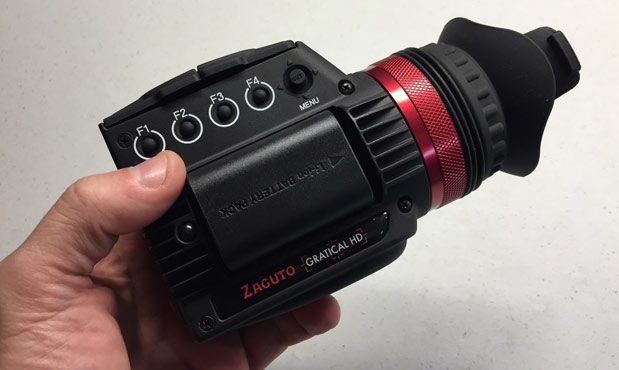 What happened? Well, suffice it to say, I never loved my Alphratron. It was generally “good enough” or “better than nothing” but I never enjoyed working with it. It always came with some compromises that, regardless of price, I had to accept because there wasn’t much choice on the viewfinder marke — especially for viewfinders that weren’t locked into specific camera systems.

But I had a few shoots close together where I could use my Alphatron, and then the Gratical, and then the Alphatron again. And the difference was so compelling that I began that familiar process of rationalizing the spending of appreciable money on a piece of gear. And here I am now, with my Gratical.

At any rate, this isn’t a full-fledged review of the Gratical, as some great ones have come before. Instead, I’m going to directly compare my experiences of going from the Alphatron to the Gratical, and why I thought the Gratical, in the end, was worth the premium.

When I first got the Alphatron, I was annoyed by the sheer physical size of it. It’s bulky, and its bulk is made more obtrusive by the fact that it’s wider than it is tall, so it’s a little harder to mount close to your camera body. And then, the most practical batteries available for Alphatron’s power-sucking LCD are Sony L series batteries, which attach to the back of the unit, and add another 2.5 inches to its footprint, and bring its weight up to about 1.8 pounds (although, you can also run the Alphatron off of a P-tap, and skip the dedicated battery).

The Gratical is a lot more streamlined and noticeable lighter at 1.5 pounds with battery. It uses small Canon LP-E6-style batteries which last 3-4 hours (about the same as the Alphatron’s batteries) , and which fit into a recessed slot on the unit, so they don’t add to its footprint. And the Gratical’s orientation is vertical, so it’s easier to move it in towards your camera body, and it feels like it puts less stress on whatever EVF mount you use (Zacuto makes an excellent mount for the Gratical called the Axis Mini and Wooden Camera has a nice solution as well). Over the course of a day, I felt the Gratical’s smaller size made a difference in shoulder fatigue, and also helped keep my rig’s footprint a little smaller and less likely to get dinged by other objects as I worked in tight quarters. 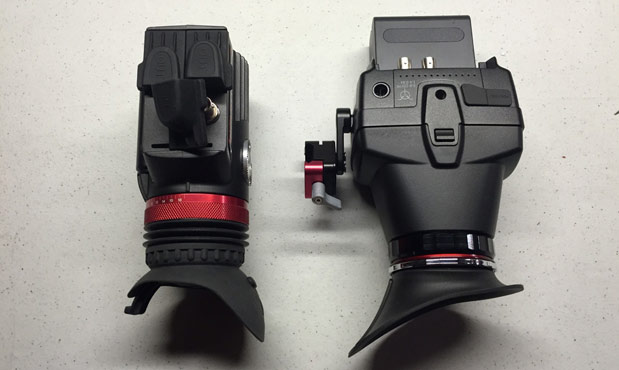 The footprint each viewfinder would occupy next to your camera. 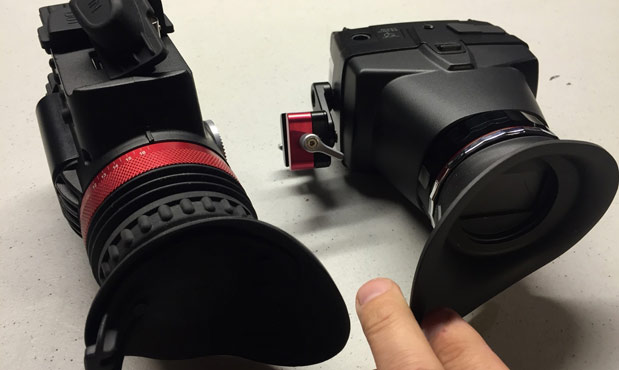 You can see the Graphical is taller but thinner, which fits into my camera rig more comfortably.

Here’s one of the major improvements of the Gratical over the Alphatron and what started me seriously thinking about the Gratical in a different light: The Gratical’s OLED screen appears *smaller* in the viewfinder than the Alphatron’s LCD screen, and that smaller size makes it SOOO much easier to see the entirety of your frame without having to scan your eye back and forth from the left corner to the right.

When I first tried out the Alphatron, I was excited that the screen seemed so big in the viewfinder, but the more I shot with it, the more I noticed that if I didn’t specifically direct my eye into the corners of its screen, I could easily miss small details like a light stand leg in the frame, or whatever else. Yet constantly sweeping my eye back and forth added to eye fatigue.

Zacuto, on the other hand, got the image size right in the Gratical. It’s big enough to see things clearly, but you don’t have to sweep your eye from one side of the image to the other to take things in.

Using an OLED instead of an LCD screen also lets the Gratical capture more contrast nuance in images than the Alphatron, particular if you’re shooting something in a camera’s Log mode. Also, the Gratical is noticeably sharper when you’re trying to judge fine detail (like focusing on something in the distance) thanks to its 1280×1024 resolution, versus the Alphatron’s 960×640 resolution. All in all, the Gratical’s image quality is appreciably better than the Alphatron’s, and that’s on top of having a smaller, more manageable image frame.

And again, the Gratical’s OLED screen sips less power, which lets it stretch a small Canon LP-E6 battery for 3-4 hours.

Both the Gratical and Alphatron have 4 user-defined shortcut buttons on the outside of the viewfinder, which you can use to toggle features like a waveform, zebras, peaking, frame guides or whatever else.

But the Gratical’s buttons are far easier to use because they’re considerably bigger, and they’re arranged one after another in a straight line, so you can easily find them by touch while still keeping your eye to the viewfinder. The Alphatron, on the other hand, uses smaller buttons that are arranged in two staggered, offset columns, making it harder to find the button you’re looking for by touch.

Finally, the Gratical uses a combo button/joystick to bring up its menu and navigate through it. A nice touch is that you can even program the joystick to act as 4 additional custom buttons, so if you haven’t pressed it in to invoke the menu, you can set an up, down, left or right move to call up any other custom feature. For instance, I’ve set my joystick’s Up to trigger Magnification, and its Right to toggle battery status.

A major threat to an electronic viewfinder is exposure to direct sunlight, which, magnified by the optics of the viewfinder, can burn the screen inside and leave permanent white spots. It can happen in a matter of minutes depending on the angle of the sun to an open, unprotected eyepiece.

Over time, viewfinder manufacturers have evolved their tools used to combat this problem. First, there was the loose eyepiece cap, which filmmakers promptly lost. Then there was the cap tied to the eyepiece so you couldn’t lose it, but would annoyingly flop around and become a distration, PLUS  you could still easily forget to put it on the viewfinder during a hectic day on set.

The Alphatron uses a variant of this strategy, with a built-in protective shutter that you can twist to open/close over the eyepiece. But again, it’s easy to forget about closing the shutter when you’re in the thick of shooting, so I honestly don’t find the Alphatron’s protection much better than having NO protection at all.

The Gratical, on the other hand, has a soft rubber cover that’s built into the eye piece, and falls into protective place as soon as you move your head away from the viewfinder. And when you’re ready to re-engage, you quickly learn how to brush the side of your head against the cap in order to push  it out of the way again as you press your eye into the viewfinder. It’s a simple, practical approach that leaves you never having to worry about the viewfinder’s exposure to sunlight (and you can easily remove the rubber piece as well, if you’re sure you won’t need it). 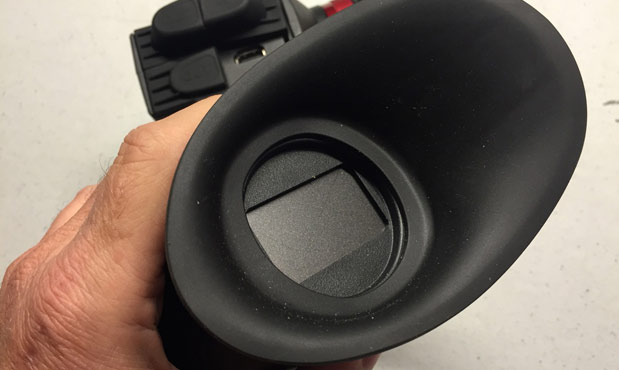 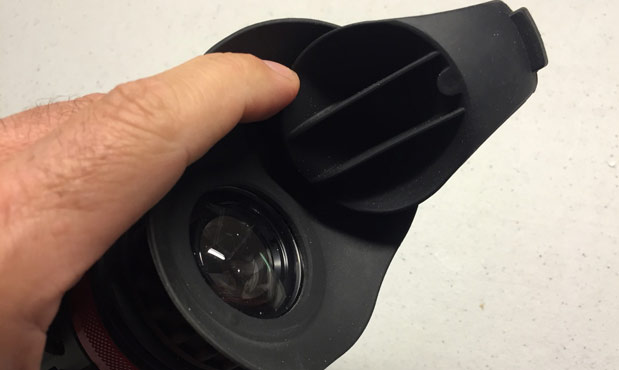 The Alphatron’s protective shutter works great — as long as you remember to engage it. Zacuto’s rubber eyepiece cover is pretty foolproof, though.  When you move your head away, it falls into place, and you can learn to push it aside (no hands) when you’re ready to engage.

Both the Gratical HD and Alphatron have a bunch of features that help you monitor your image, including waveform, vectorscope, peaking (choose your color), magnification, audio levels, a form of false color, and others. Both also have HD-SDI and HDMI inputs and outputs and can do cross-conversion between the two.

But the Gratical goes further in a few key ways. For starters, it lets you load up custom 1D LUTs (a 1D LUT is limited to exposure/gamma control, versus a 3D LUT that also controls color) so you can see a more graded image versus the unprocessed image you’re recording. There are pre-built LUTs for popular Log formats from Canon, Sony, and others, and you can also import LUTs that you’ve created in tools like LUTCalc. See Zacuto’s FAQ page for more about LUTs, including the suggestion that 3D LUTs will be added in the future.

You also get a nice frame capture feature that lets you take a still of video, and then toggle it on and off so you can quickly compare stills to live video. It’s a great idea that I wish camera manufacturers would build directly in cameras, but since that’s apparently too much effort, I’m grateful that Zacuto implemented it in the viewfinder.

A GRATICAL FOR ALL SEASONS

So now you know why I found the Gratical so appealing over my Alphatron — ie, a bunch of small-to-medium-sized improvements, working across a lot of levels, created an appreciably better EVF experience.

The only problem most people will have with the Gratical HD is its $3100 price tag (although if you buy one with a new Recoil rig, you can get $1,000 off the package). That price does include lifetime feature updates — and Zacuto has indicated that there will be some useful updates in the future — but still, $3k puts the Gratical HD beyond reach for many shooters.

The good news is, Zacuto is working on a couple of other Gratical models with lower price points. A Gratical X, due in late July, will feature the same body as the current model, and sell for $1650. That gets you started with a fantastic viewfinder, but features like signal passthrough, LUTs, and possibly some other tools will have to be unlocked for additional fees, and lifetime feature updates won’t be available. Still, a ton of people won’t need those extras, and they’ll be happy to get in on the Gratical for appreciably less.

Zacuto also showed a Gratical Eye EVF at this year’s NAB, and that features the same OLED screen and image processing, but comes in a much smaller case that’s powered via a p-tap connection (no battery operation supported). The Eye won’t be shipping until earlyish next year, and price is undetermined, but it’s expected to be the most affordable of the Graticals.