Using Sony A-mount (and a couple of E-mount) lenses for video on the NEX-FS100. 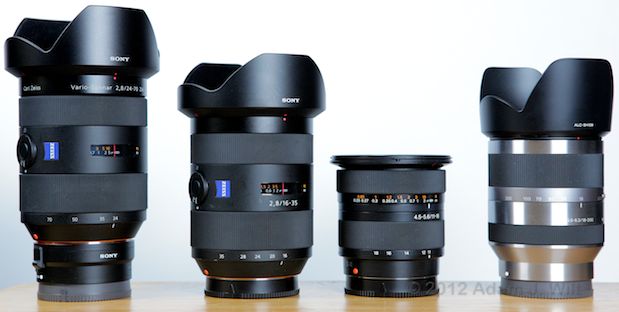 Sony sent me an NEX-FS100 to review , and included seven additional lenses: three A-mount zooms, three A-mount primes, and the E-mount 16mm pancake. They also sent two A-to-E-mount adapters, the $200 LA-AE1 and the $400 LA-EA2. Here’s a quick look at these lenses and adapters, and how they work for video on the NEX-FS100.

Sony Alpha lenses are descendants of the storied Konica/Minolta A-mount lineup, dating back to 1985’s Minolta Maxxum 7000 35mm SLR. A-mount’s flange depth (the distance from the mounting flange to the sensor plane) is 44.5mm, whereas the FS100’s native E-mount has an 18mm flange depth. Both A-mount and E-mount lenses use body-driven aperture controls and lack an aperture ring on the lens body. An A-to-E-mount adapter has to both span the distance and provide iris control; Sony offers two adapters that do that, the LA-EA1 and the LA-EA2. 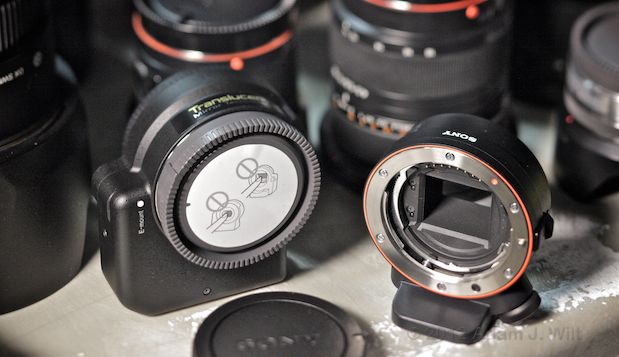 The LA-EA1 is the simpler (and cheaper) adapter: it mates A-mount lenses to E-mount cameras, and provides autoexposure and contrast-detection autofocus control on compatible NEX-series cameras.

On the FS100, it offers manual iris control only. You use the FS100’s iris wheel to change aperture in 1/3-stop increments, and the iris moves quickly from setting to setting. Stopping down works as expected: the image darkens 1/3 stop for each increment. Opening up is a bit startling: the iris snaps all the way open and then instantly closes down to the desired stop, so your image will blow to white momentarily. Sony says this is done so that the stop is alway set in a stopping-down direction, for consistency’s sake (simply opening to the desired stop doesn’t take slop or backlash into account, and the set stop may be smaller than it’s supposed to be).

In either case, the discrete and sudden stepping of the iris means that you really need to set a stop for a shot and leave it alone; you don’t want to pull aperture during a take (this is not an uncommon issue with electronically-driven stills lenses used for video, even those lenses supposedly optimized for video use!). If you do need to vary exposure while rolling, variable ND filters are worth looking into.

The newer LA-EA2 is twice the price, but it includes phase-detection autofocus capability, courtesy of a translucent beamsplitting mirror wedged between the A and E mounts: 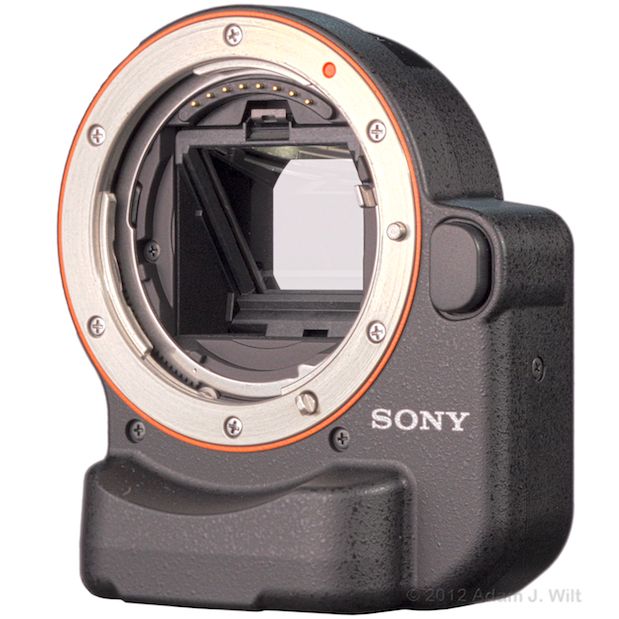 The LA-EA2’s translucent mirror illuminates phase-detection autofocus arrays in the base of the adapter. That mirror explains the cap sticker in the image above.

Stanford.edu has excellent Flash-based demos and discussions of phase-detection and contrast-detection autofocus systems.

The LA-EA2 isn’t currently supported by the FS100, but the upcoming (“early 2012”) FS100 firmware update will enable “one push Auto-IRIS and continuous 15-point, Phase-Detection Auto-Focus operation with most Alpha A-Mount lenses… Lens metadata is displayed onscreen and stored real-time to image file.”

No mention is made of enhanced operations with the LA-EA1, nor is it clear if the LA-EA2, along with the new firmware in the FS100, will allow smooth, continuous aperture control, making it usable during a take.

The mirror in the LA-EA2 steals about 1/3 to 1/2 stop of light for the phase-detection array, though given the FS100’s extraordinary low-light performance this is unlikely to be a serious issue (grin).

Of more concern is the possibility of ghosting: a faint, vertically-displaced image due to internal reflections in the mirror. I set up a variety of contrasty shots including bright, specular highlights, and shot them with the same lens mounted on both the LA-EA1 and LA-EA2 adapters. Comparing both sets of clips, I’m unable to see any ghosting: if there is any, its displacement is too fine to be seen by the FS100’s “low resolution” HD image (the 1080 lines of full HD is low-res indeed compared to the 4000 lines in a full-size picture from an NEX-7 E-mount still camera!).

Both adapters are robustly built and mate snugly with both lens and camera, but they do have mechanical differences. The LA-EA1 is a minimalist affair, a simple black cylinder coupling lens to camera. It has a clever, detachable “foot”, including a tripod mounting socket, that is affixed with a thumbscrew and easily removed when not needed.

Even with the foot, the FS100 sits flat, even on the longest of tripod plates. Not so with the LA-EA2; its autofocus sensors push its base below the level of the baseplate on the FS100.

Sony’s A-mount lenses are a breed apart from the E-Mount lenses previously reviewed. Where those lenses are unusually small and lightweight, these lenses are big and hefty: the phrase “built like a brick outhouse” came to mind more than once. They felt every bit as rugged and businesslike as my Nikon and Canon lenses; even more so, perhaps, due to their industrial-chic matte black finishes. 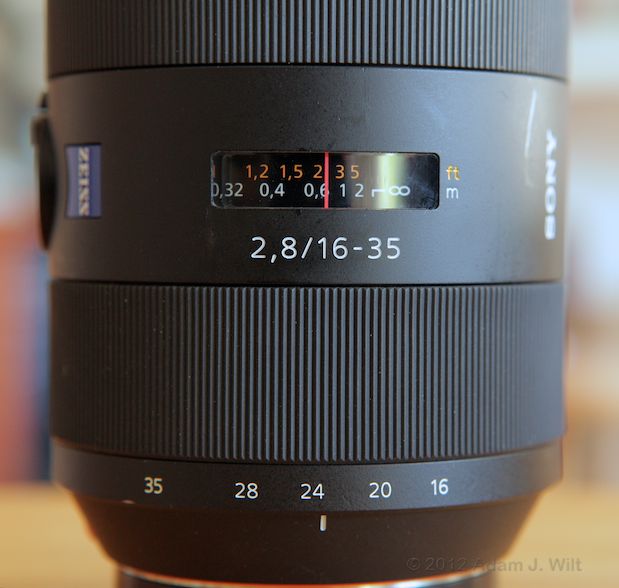 The SAL1635Z is typical of the Zeiss-badged zooms: broad, ridged-rubber control rings, focus scales behind a window on the top of the lens. As on a Nikon G-series or Canon EF lens, the focus ring is a friction-drive control: it adjusts focus directly, but once you hit an endstop, the ring will keep turning past the endstop with a bit more force. The zoom is a hard-coupled mechanical zoom. 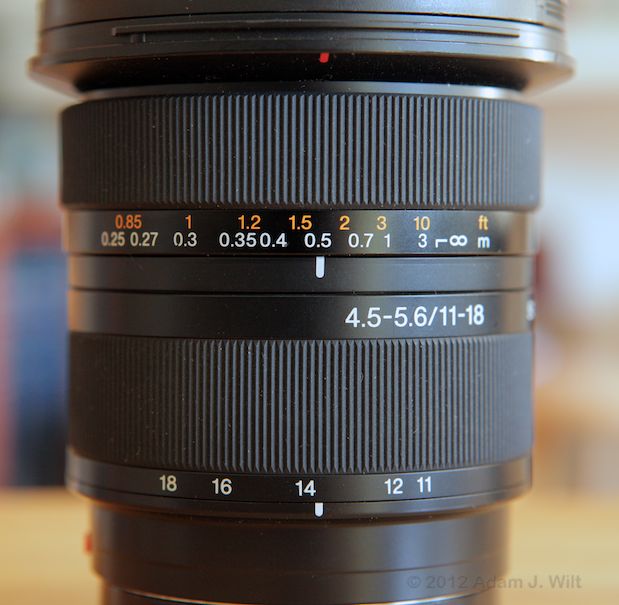 The 11-18mm zoom has hard-coupled zoom and focus controls (just like a cine lens, grin). 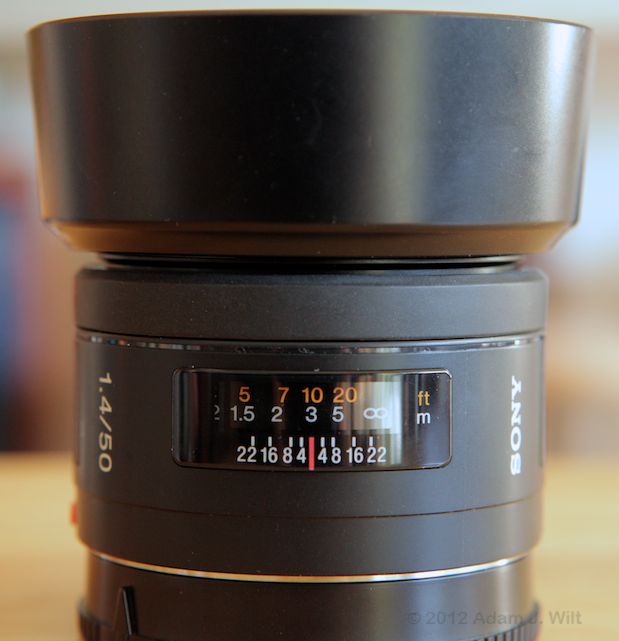 All the Alpha primes I looked at had windowed focus scales with depth-of-field indicators. The 50mm and 16mm fisheye used hard-coupled mechanical focus rings with flat rubber surfaces; on this 50mm, it’s the matte black ring at the front of the lens, just above the chrome accent ring and below the lens shade.

Every lens I put on the FS100, when aimed at a light source, shows a bit of greenish flare diametrically opposite the light, but the Sony lenses, in general, showed less such flare than roughly comparable Nikon lenses I tried. Mind you, none of the Nikon lenses I used (50mm f/1.4 D, 35mm f/2 D, 17-55mm f/2.8 G, 70-200 f/2.8 G) were Zeiss-branded, nor did they have the quite the same price tags; sometimes, you do get what you pay for. 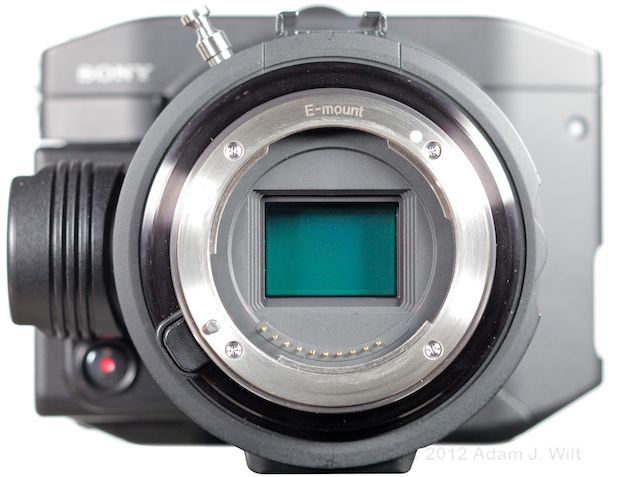 I can’t imagine that this big, green sensor would cause any flare.

The zooms are supposed to be “true” (parfocal) zooms, yet I found that all of them focused slightly closer at wide angle than at telephoto, though the difference was very small. My guess is that the adapters I used didn’t quite hit the correct flange depth, and I didn’t see any obvious way to adjust them (neither the PL-mount nor the Nikon-mount lenses I used had any problem; both PL-mount adapters were shimmable and were correctly set, and the $23-from-Amazon Nikon adapter likewise seemed to be at the correct depth). I don’t know if I just had bad samples, or if the adapters are shimmable or otherwise adjustable.

Below, I list my quick-and-dirty test notes, along with lens specs, typical street prices, and where available, links to detailed tests at SLRgear.com.

SEL16F28, 16mm f/2.8 pancake lens, $250. 2.5 oz (70 g), less than an inch long! About a 120 degree throw from 0.2m to infinity, doesn’t seem rate-sensitive. Free-spinning ribbed metal ring. Some mustache distortion, mostly noticeable as pincushioning of the ends of vertical lines at the edges of the frame. No chromatic aberration to speak of. 49mm filter threads. Detailed test at SLRgear.com. 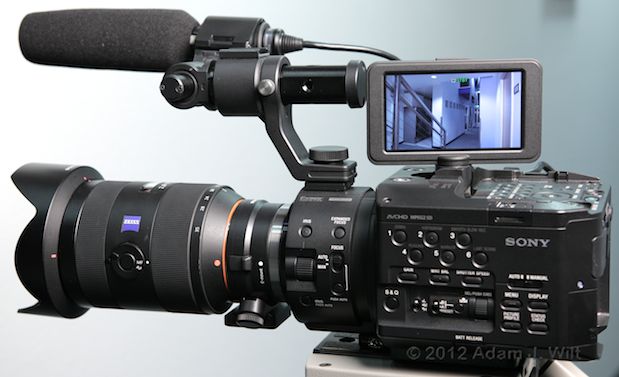 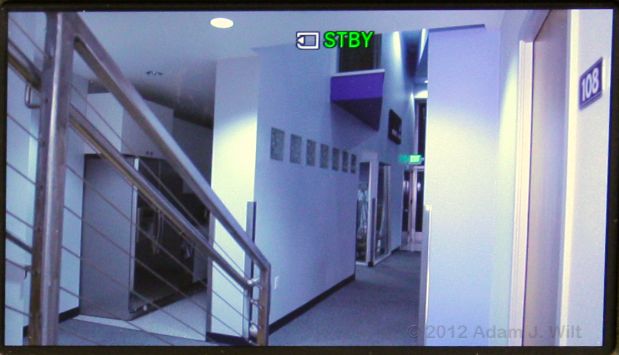 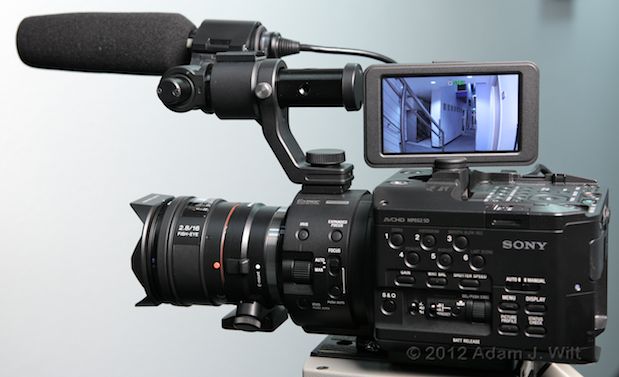 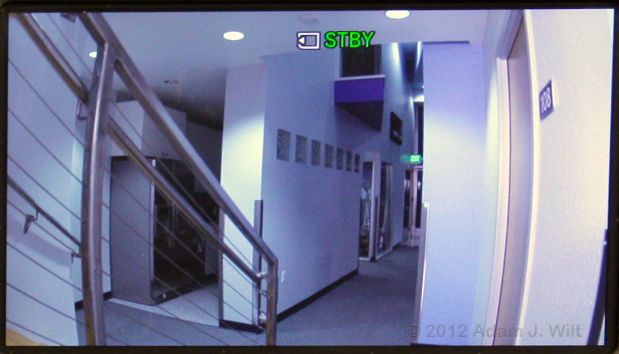 The picture from the 16mm fisheye. 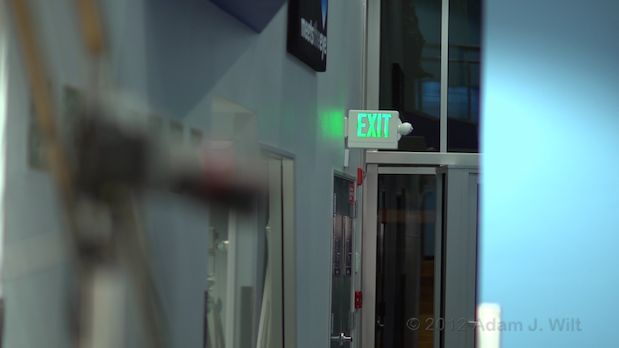 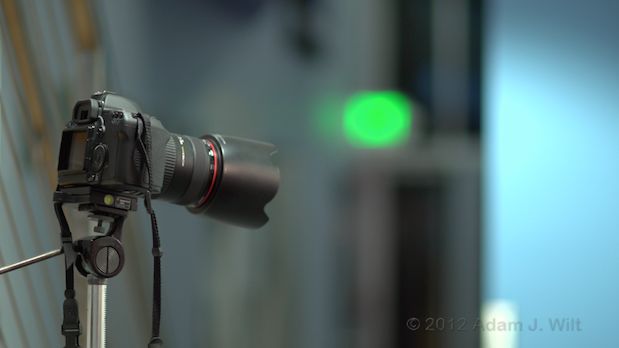 Disclosure: Sony shipped me an NEX-FS100UK, several Alpha lenses and adapters, two variable ND filters, two PL-mount adapters, and a PVM-740, which I returned at my own expense ($386.85, insured) at the conclusion of testing.

No material connection exists between me and Sony. No one has offered any payments, freebies, or other blandishments in return for a mention or a favorable review.

Sony reviewed an early draft of this article for technical accuracy. Any remaining errors are mine alone.