Anyone who’s spent time in Las Vegas at the annual NAB convention knows how daunting it can be. Since the pace counters are ubiquitous on our smart phones nowadays, we can easily keep track. My own counter registered over a whopping 12 miles of personal walking over the two days that I attended. Comparing notes with other attendees however I find I’m on the low side.

NAB is spread out over several very large halls and per the momentum in technology this year there were many 4K televisions solutions as well as an unbelievable amount of different drones available. I am mostly concerned with all things audio so that’s where I will focus this article. Here’s just a few things that caught my eye on this trip.

Anyone who’s spent time in Las Vegas at the annual NAB convention knows how daunting it can be. Since the pace counters are ubiquitous on our smart phones nowadays, we can easily keep track. My own counter registered over a whopping 12 miles of personal walking over the two days that I attended. Comparing notes with other attendees however I find I’m on the low side.

NAB is spread out over several very large halls and per the momentum in technology this year there were many 4K televisions solutions as well as an unbelievable amount of different drones available. I am mostly concerned with all things audio so that’s where I will focus this article. Here’s just a few things that caught my eye on this trip. 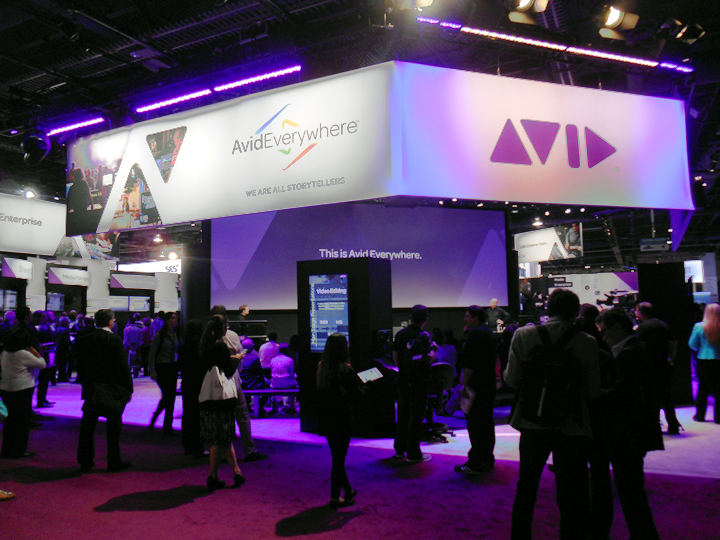 AVID Technologies has made several strides in the changes to the parent company that are being reflected in the product offerings. They have expanded the capabilities of their AVID Everywhere platform but more importantly are giving stuff away for free! If you’ve ever wondered how the Media Composer or Pro Tools work, now you can have a hands-on experience with both in fully functional versions.

The Pro Tools First system is a free version of Pro Tools. Of course there are some limitations but it is a perfect introduction to the environment of the Pro Tools Digital Audio Workstation. It is cloud based so it can truly be “everywhere” however, you will be limited to three sessions at a time.

Since it is a free, entry level item in the family of Pro Tools software it does leave out, among other things, video tracks. That makes this version lean towards music production and mixing rather than post audio. It offers 16 tracks across the board, 16 audio tracks, 16 midi tracks, 16 instrument tracks, 16 auxes and four i/o’s and the ability to add up to four inserts per track. These are currently limited to AVID only branded plug-in inserts but they are working towards a third part implementation as well.

Pro Tools First is an excellent way to get your feet wet in the Pro Tools environment to determine if making purchases to the more extensive platform is the right fit for you. I can’t speak to the free version of Media Composer. I’ll leave that to the video pros here on ProVideo Coalition.

The Pro version of Pro Tools has also gotten an upgrade to Pro Tools 12. Not a lot of huge changes at this point but the guys at the AVID booth have told me that some under the hood changes will facilitate some newer improvements as the version 12 iterates upward. Some of that includes a tighter cloud implementation and access to buying apps within the program itself. AVID has also started a subscription service for new and existing Pro Tools users keeping things up to date in a more affordable way.

These changes are another volley in AVID’s desire to create a vibrant, could based collaboration platform. The tools are there now to start creating profiles, uploading tracks and music to create a personal online presence. These can be searched and accessed by other users and start the dialog to creative collaboration. With these advances AVID can truly become a musical collaborative social network and these versions of Pro Tools are yet another step towards that goal. 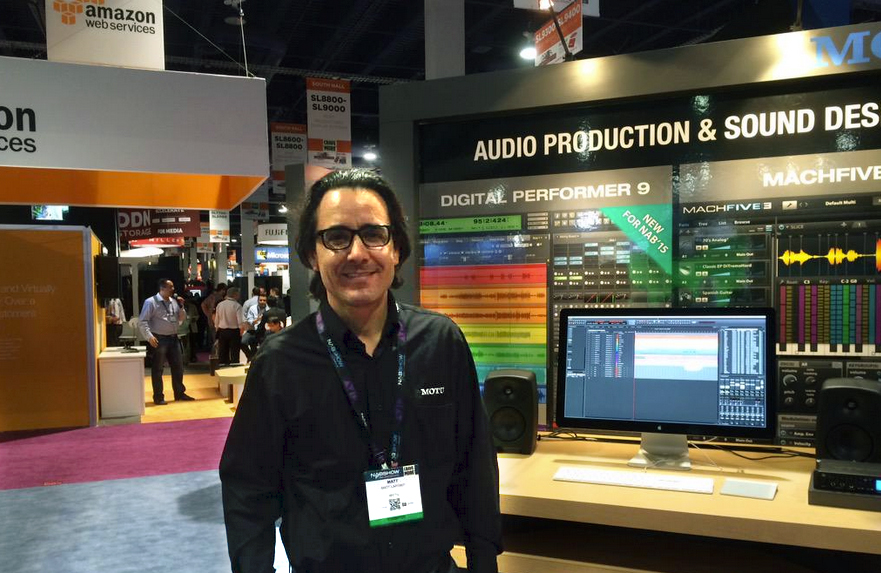 AVB or the audio visual bridging protocol that was established by the IEEE has gotten extensive use from MOTU in their boxes. Since the native implementation of AVB in Mac’s OS Yosemite, MOTU has taken advantage of the protocol. In talks with some of their people there are still some pending implementations that are waiting for updates to the protocol in the OS itself. All of this is heading in the right direction however.

The AVB protocol is a game changer for networking systems across devices and across facilities even adding extensive wi-fi capabilities. This link will give a broader overview of how things can route. But in a nutshell, with a single, high quality CAT-6 cable up to 512 channels can be accessed and that audio can be moved between devices and systems. MOTU’s Matt LaPoint showed me many of the configurations that are possible with the MOTU implemetation.

MOTU devices have been cross platform for a long while and offer a diverse set of devices for various needs. Their new AVB software makes an easy task with pre-baked presets for various standard audio configurations. Best of all, this implementation means that the networking provides a sub-millisecond latency for all signals! This is key for recording and playback.

Pro Sound Effects has updated their Master Library to 2.0 as well as increasing the visibility of their subscription service to their complete collection of sounds. These can be multi-user seats for larger companies as well as full buy outs of their sounds. One of the more innovative things that I’ve seen in audio at NAB 2015 is the their use of ambisonics technology to record sound effects.

Ambisonics is not a new technology but the implementation here does make it very relevant to today’s workflow and digital abilities. In a nutshell, the recording technique uses a single microphone that has a number of elements within it. Each of those microphone elements records the source from its particular angle. Each of the elements are recorded as separate tracks allowing for extensive manipulation in post.

Their first library with these capabilities is the NYC Ambisonics, which is due to release in May. This will include four recorded channels per sound. It will also include a software decoder device to allow for extensive repurposing of the original recording. With this software, the prominence of each mic element can be adjusted, as well as changing the polar pattern of the mic from the original recording. I’m looking forward to hearing more about the microphone they used, the recording process and the software decoder used to manipulate it. 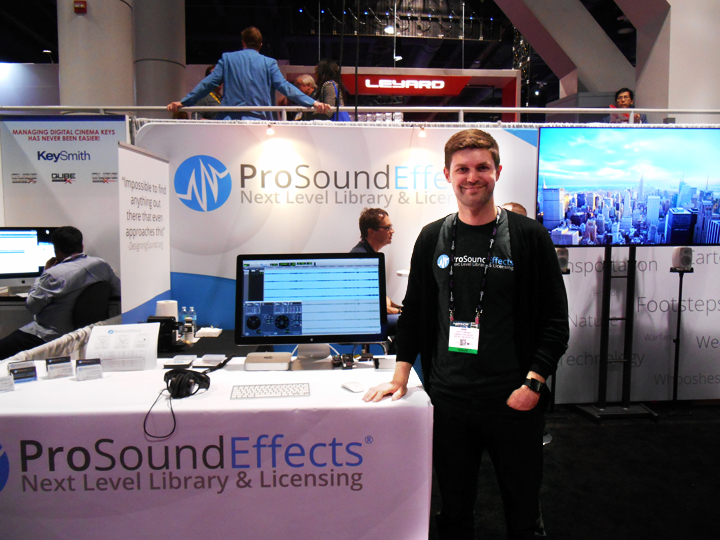 I think the use of this technology has great promise going forward. I had a brief discussion with David Forshee who is overseeing this product for Pro Sound Effects. I had mentioned that a great set of walla or Foley recordings could make wonderful use of this technology. By allowing a sound engineer access to many recorded versions of the set of sounds it has the ability, with the decoding software, to better integrate these post elements into existing sound edits. Besides, we could always use more convincing walla and Foley libraries!

ProVideo Coalition had a strong presence at NAB. With so many halls, products and technologies to discover, I am looking forward to learning about what my fellow PVC writers saw at the show. 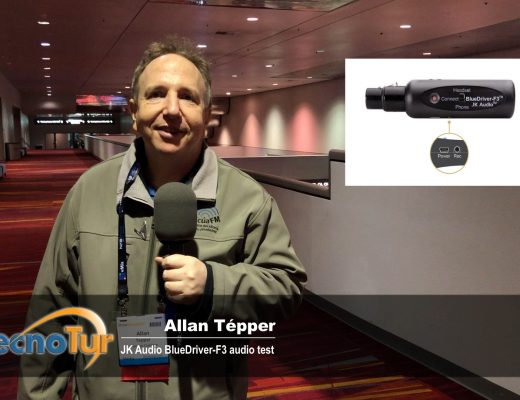 At NAB 2018 in Las Vegas, I got my first real opportunity to test JK Audio’s BlueDriver-F3 wireless Bluetooth... 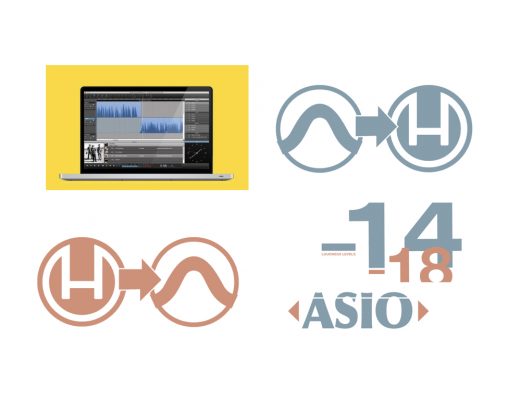 Hindenburg has just informed me officially that at NAB 2018 next week, they’ll be announcing a few new key... 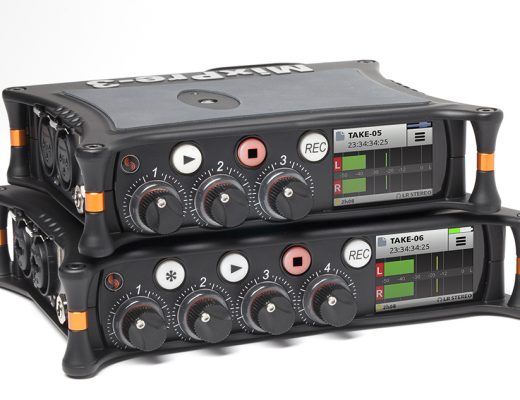