If you still have doubts that FCP X is really just iMovie on steroids – and the fact that the first thing it asks to import from IS iMovie and that’s not enough of a clue – then take a very close look at the launch screen for FCP X.

This is supposed to be a BRAND NEW APP, as Apple has said numerous times in defending itself that FCP X is NOT the next version of FCP7.

I think most viewers agree with that.

But the launch screen says that FCP X is … VERSION TEN DOT ZERO … but of what?

I have to write that out in words and all caps, because otherwise, FCP X v1.0 looks an awfully lot like FCP X v10. 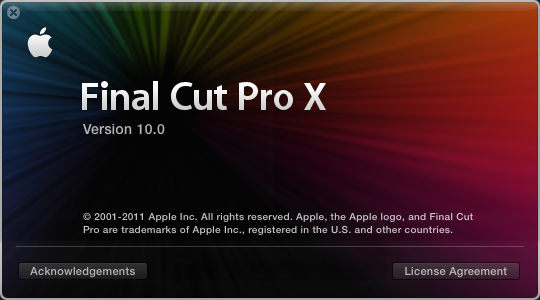 But if you look at the number of releases for iMovie, then version 10 as it becomes FCP X is just about right.

Don’t believe me? Look at the LATEST VERSION OF iMovie! What’s the version number on that, you ask?

This is PERFECTLY consistent with the way Apple names and numbers their products. Remember Mac OS9. I still have the discs around here someplace. Anyway, the next version of Mac OS 9 was Mac OS X and the VERSION number was Mac OS X version 10.0.

Fast forward a few years and we’re up to iMovie ’11 version 9.03 and the next version is called FCP X and the VERSION number was FCP X version 10.0. The corollary is perfect.

FCC Disclaimer: I bought my own version of FCP X. The fact that it is currently useless for professionals is in no way influenced by the fact that I spent $399 of my own money on the unbundled FCP X apps. If Apple had given me the app for free I probably would have written glowing things about it, though.