An affordable remote follow focus for the rest of us…

Ikan’s Remote Air One (also known as the PD Movie) is a wireless remote follow focus that’s easily the most affordable I’ve seen. You can get a single-channel kit at B&H Photo these days for $1599, including a hard case, a handheld transmitter, receiver, single .8 pitch standard torque motor and all the necessary cables and connectors to mount it on 15mm or 19mm rods.

To put that price in perspective, the next low-cost kit I’m aware of is Cinegears’ Express Plus at $2129, and then Redrock Micro’s microRemote at $2690. After the Redrock, there are units from mid-tier companies like Bartech, Heden, Hocus Products, RTMotion — all roughly in the $4,000-$5,000 range for a single channel system. And price tags keep going up as you move to higher-end gear from cmotion, Element Technica, and the granddaddy of them all, Preston.

So given the Remote Air’s unusually low price (there’s also a two channel model for focus and iris at $2499), I had to wonder if the Air could really be effective on a real-world set. Now, after taking it on a few jobs over several weeks, I have my answer: it does a surprisingly good job, giving you many of the same features found in more expensive units. Auto lens calibration? Check. Responsive transmitter/motor connectivity? Check. Decent range? Check. Set A and B marks? Check. Reverse motor direction for those ‘weird’ lenses? Check!

Here are some hands-on, real-world impressions,…. 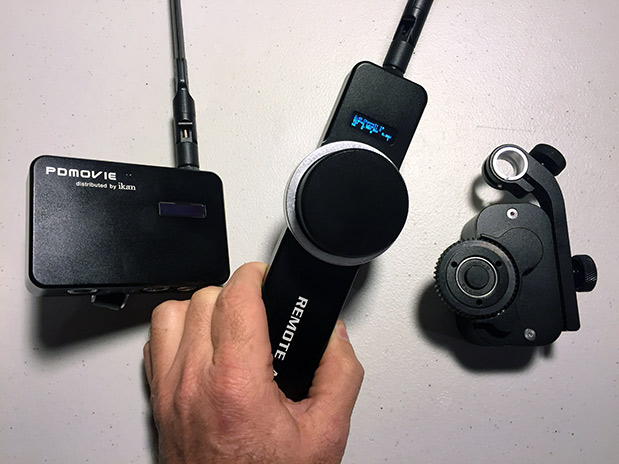 The Remote Air comes in a slim hard case, with hard foam cutouts for all the pieces. The narrow transmitter is a bit unconventional in size, but feels good in your hand and its focus wheel has a nice weighted quality to it. The transmitter has a non-user-replaceable internal battery which lasts about 30 hours, and can be recharged by plugging it into a wall or a USB power source.

As for the receiver, you can power it from a 12 volt source with a p-tap— anything from a big production battery to smaller ones like Ikan’s IBS-U65, or those little batteries used on gimbals.

To get started, just turn on the transmitter and receiver and get them on the same channel by pressing the Channel button on each device (just keep pressing the Channel button to step through all 20 available channels). Once both transmitter and receiver are on the same channel, they should be linked and respond to each other. If they’re nearby, you’ll see each report a signal level of 100% on their LCD screens. Note: once or twice, I noticed that they were linked but not responding to each other. Powering them both off and then powering up the transmitter first should fix that. 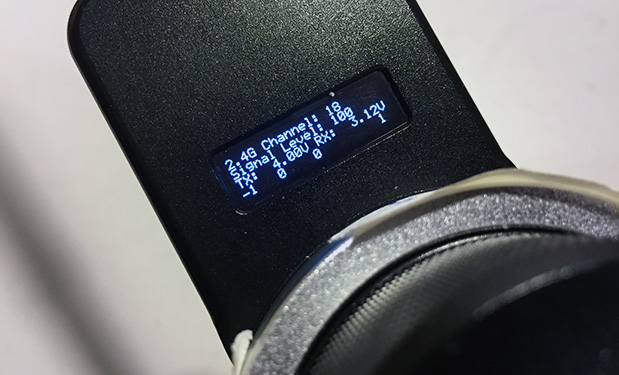 The display on the Air’s transmitter reports your channel and signal level. You can guestimate your transmitter’s 30 hour battery level by reading the TX voltage.

To calibrate your lens, just hold the “Nerve” button on the side of the transmitter for 3 seconds. The Remote Air’s motor responds by moving to one end of the lens’ focus wheel and then to the other (if you’re using a still lens without hard stops, the Air will still detect the gear teeth you’ve installed on the lens, and count them as hard stops). The Air maps that range on the lens to the 360 degree focus wheel on your transmitter. The transmitter has no white disk for making focus marks, but you can put down a thin strip of tape, and make your own marks on that.

One annoyance: after the Remote Air finishes calibrating itself to a lens, it needs about 20 seconds before it will respond to moves from the transmitter’s focus wheel. That’s probably not going to delay any real business on set, but it can be confusing for an unfamiliar AC you might hand the Air to.

This is what ultimately sold me on the unit — it’s very responsive, so that when you turn the focus wheel on the transmitter, the motor spins the lens exactly as you’d expect, with no apparent latency. Doing slow, creeping moves is easy, as you can see from the video below, where I slowly dial into a bunch of lens marks. Doing quick racks from one end of the lens to another has a tiny delay as the motor ramps up speed, but is definitely within the bounds of respectability.

The only hiccup in performance I found was when I put a thin strip of tape on the transmitter’s focus wheel, calibrated a lens, and then penciled in multiple marks on my tape  — 3’3 feet, 4 feet, 6 feet, 10 feet, 17 feet, etc. As I repeatedly dialed the transmitter’s focus wheel to those marks, the motor would usually turn the lens to exactly where it should have been (precisely on 4 feet, 6 feet, 10 feet, etc.). But occasionally, the motor would miss the exact mark on the lens by a millimeter or two (see photo below). In the majority of cases, I doubt this drift would impact real-world sharpness, but it’s something you don’t tend to see in higher-end systems.

If it’s a concern for you, check out the video below where I move through the marks on my tape, so you can see when the motor hits its mark exactly, and when it’s off a bit. 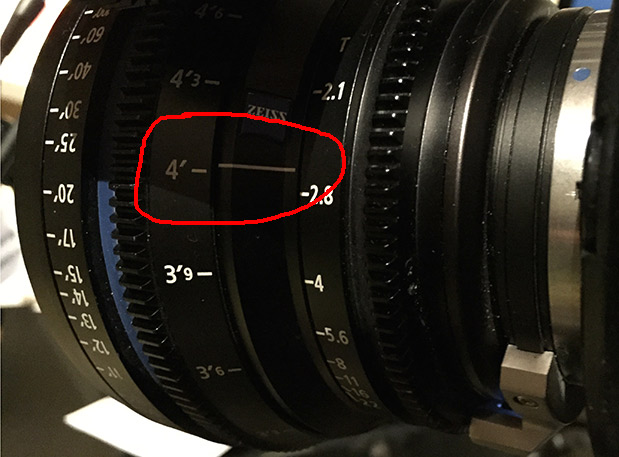 I set the mark on my tape at exactly 4 feet. The Remote Air usually returned exactly to 4, but occasionally showed a little drift.

As for range, ikan’s advertising says the Remote Air has a 300 foot range, line of sight. I didn’t have a chance to put that to the test, but I did test the transmitter from about 40 feet away, through a dry wall and a closed door. No problems at all. I also tried it from about 100 feet away line of site (down a long driveway), and again had no problems. From my experience, you could certainly put this on a crane, and can probably get away with controlling it from another car for driving shots. A drone will probably push your luck, though.

The Remote Air’s receiver and motor aren’t quite as svelt as other systems. The motor is the biggest piece of the family and is noticeably bulkier than high-end motors from the likes of Heden or RTMotion (of course, their motors cost about the same as the entire Remote Air kit). For comparison, the Ikan motor is about 335 grams, whereas a Heden motor is about 250 grams. As for the Air’s receiver, it’s also on the larger side (218 grams vs 118 grams for RTMotion’s MK3.1 receiver), but is lighter than it looks. Still, both the motor and especially the receiver are in the bounds of acceptability, and I can see them making their way onto gimbals and other setups that need to keep weight down.

As for noise, the motor makes a slight clicking sound when it begins to move, and you can hear that on the videos posted above. It’s subtle, though, and isn’t likely to disturb work on set. When the motor moves through slow to medium-speed moves, it’s essentially silent. If you’re doing fast, long racks, you’ll definitely hear the motor whirring away, while motors from higher-end systems tend to be quieter. For the majority of work, though, I think it’s safe to classify the Remote Air as quiet enough. 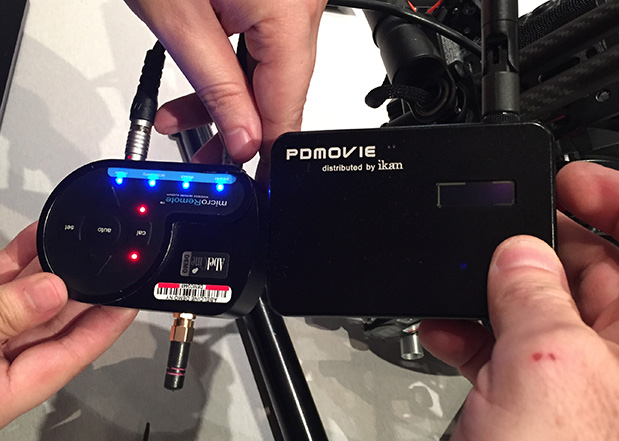 The Remote Air (aka PD Movie) receiver next to Redrock’s microRemote. Thanks to AbelCine in Burbank for the photo help. 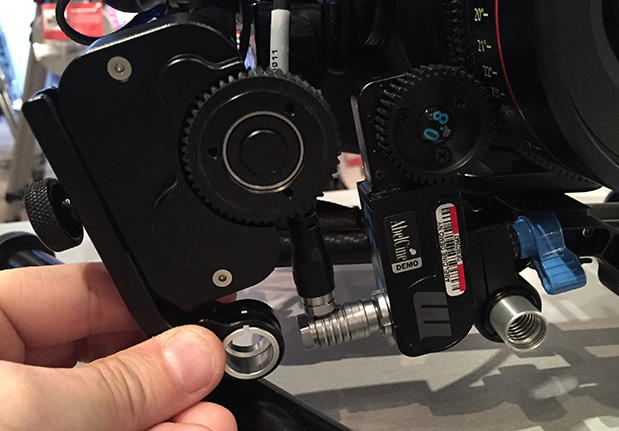 The Remote Air’s motor next to the smaller Redrock.

The Air has two features that I wasn’t expecting, given its low price. The first is the ability to reverse the direction the motor spins the lens, for those lenses (like Nikons) that focus near to far by turning them right instead of left, or for when you’ve mounted the motor upside down. Reversing direction is easy: just press the Transmitter’s Nerve button 5 times to toggle direction.

It’s a lot to explain, and it’s even more to actually do — I couldn’t do it even after watching Ikan’s demo video here, and had to call tech support. Finally, I’m now getting the hang of it and setting marks reliably, but I can’t expect good results if I want to hand the transmitter to a camera assistant who’s never used it before.

At any rate, one last note about the A/B marks feature: You can hit the Nerve button twice to cancel the A/B marks, and once cancelled, just hit it again to re-implement the last ones you set.

Ikan’s tech support is pretty good. I had a few tech questions over the course of the review, and always got a knowledgable rep on the phone within a minute or two during business hours (tech support is open on business days from 9am to 6pm central time). Also, the first Remote Air I got from ikan had a problem keeping a charge, and ikan cross-shipped a new unit to me the next day, taking my credit card temporarily as they waited for my old unit to arrive. For U.S.-based customers, this kind of support is easy to take for granted, except when you consider that a lot of remote follow focus makers are small little shops working out of the country, and user forums are filled with stories of them taking days or weeks to respond to emails and longer to get repairs done. The fact that ikan has such a big support operation in the U.S. will make a lot of U.S. customers’ lives easier.

As I said, I was a bit skeptical that the Remote Air would do enough — and do it well — to justify even its low price, but the Air’s performance made me a believer. It’s not going to appeal to professional camera assistants who are used to ordering Prestons or Bartechs or Hedens. Compared to those units, the Air’s range is shorter, it’s not quite as precise, its hardware is bulkier, it doesn’t have swappable marking disks, and setting A/B marks is harder and more limited. But the Air can nonetheless get the job done on a lot of different productions, and is a great option for shooters who can’t spend thousands of dollars for one component in their arsenal.