Truly Compact and Portable Jib for DSLRs and HD Camcorders

The new Genus Mini Jib was designed for portability and simple setup/operation on location. It's not meant to be a studio jib but while it can handle a decent payload of about 9lbs, you can manage to get a decent load to balance and maintain control of the operation. I give the Genus Mini Jib a thorough test with different camera configurations and push it to the limits. UPDATED with the Genus MoCo motion control system for the Mini Jib started on the bottom of Page 2.

The Genus Mini Jib was designed for lightweight portability, simple setup and reliable performance. Like most Genus products, the build quality is superb yet quite simple. One personal can easily manage the setup and operation of this jib – if you don't get too carried away with your camera configuration, that is.

The jib comes completely assembled and folds down to fit in its own carrying case. When you add your own weights, they should fit nicely in the bag with the jib assembly and the unit's components always stay together in a case that's similar in size to a small tripod bag.

The unique design of the hinged back arm is magnetized so it doesn't flop around in either the open or closed state. Features like this have the trademark Genustech quality touch with a design and construction being very robust, it will withstand a lot of use.

As with any jib, you will need to purchase your own weights to counter your camera gear. Luckily, since this is a small jib with limited capacity, we're not talking about having to lug around a lot of weights. I found you can get free weights at Sears for about $1/lb. I selected two 5lb and two 2-1/2lb weights so I could balance about any configuration I may need.

The Genus Mini Jib also has these quick release adjustable weight clamps that allow you balance out your rig and hold it tightly in place. Again, a brilliant design for the solo shooter!

For a simple small camera setup, the Genus Mini Jib allows you to mount to any sturdy tripod, as long as you factor in the weight capacity of the tripod head to accommodate both the camera and the jib + weights. If you've only got a stripped-down DSLR and about 7lbs of weight, then a basic video head tripod may work as a support base.

However, for my tests, I decided to use my old steel tube Bogen tripod with a heavy-duty pan/tilt head I use for timelapse/lock-off shots because it's a tank! The Genus Mini Jib easily attached to the quick-release plate and was secured by the plate's inset screw as well.

The jib head is designed to mount to the top plate or with the drilled/tapped mounting holes on either side, depending on your mounting bracket preference, and has a built-in spirit level to make sure the camera is mounted to a level base, regardless what your tripod is set to. The base mount also has additional drilled/tapped holes to accommodate acccesories as well.

Here's a quick video of the Genus Mini Jib in action from their website:

I wanted to test the Genus Mini Jib under conditions I might find myself shooting with the available gear I currently have. A Sony EX3 and a Canon 60D (with the Genus Matte Box/Rails I'll be reviewing shortly).

Here's a shot from the Genus website of their designer's DSLR setup for comparison:

While the suggested use as illustrated on the Genus website indicate that a stripped-down DSLR rig (DSLR, short prime lens and a matte box) can be mounted directly to the jib head (preferably with a quick release plate of some kind) mounted forward on the head as shown above – my cameras and gear stick out past the back of the head mount and are more balanced on the mount, so I elected to use an offset mounting plate. This allows uninterrupted movement in the lowest position and protects both the jib arm and the camera from damage caused by the back of the camera/rig from hitting the jib arm.

Starting with the Sony EX3, I stripped it down to the bare essentials for weight and connected to my monitor via the video cable. I could chose to use the wireless remote to control the operation of the camera if I chose to using this configuration.

I was able to mount the monitor on a clamp with an arm just behind the pivot point of the jib mount to help balance out the camera and weights without affecting weight distribution too much. Typically, the monitor may be mounted to a non-moving position for the DP to be able to see it but as a solo operator, you'll need to be able to watch your movement closely right behind the jib as you move it (and depending on how long the cables are that you have with you on location).

Here's an example of the extreme movement of the Genus Mini Jib with the EX3 and monitor mounted with this configuration.

Continued on Next Page –>

I mounted the my Canon 60D onto the Genus Film Makers Kit with a Universal plate, Rails and Matte Box (look for a full review this summer on PVC). Since I'm putting this onto a jib and wanted to use the Tiffen Circular Polarizer with this camera, I made sure to lock down the rotating filter tray to be sure it didn't rotate. Again, since I needed to utilize the extension rails on the rig to accomodate my setup, I also needed to mount my horizontal mounting bar to offset the camera as to not interfere with the jib frame.

I was using an HDMI cable to connect with my field monitor, but unfortunately brought the shorter cable instead of long one, so I had to mount the clamp for the monitor up in the forward jib arm. It wasn't an issue since the DSLR rig was only around 6-7lbs and I was still able to balance it just fine and see the monitor while shooting.

The extended range of motion is quite remarkable for such a compact, portable jib. Here are a series of images showing he full range of extension and motion with the DSLR kit mounted on the Genus Mini Jib.

A new addition to the Genus jib accessories lineup is the new Genus MoCo (Motion Control System) – a very simple design that just plain works. You can catch a glimpse of it in the Genus demo video on the first page of this article and read more about it here. This is new item introduced earlier this year (available on the Genustech website for $280 US, but stock is sometimes backordered) and I have had a chance to finally put it to the test in the past month. 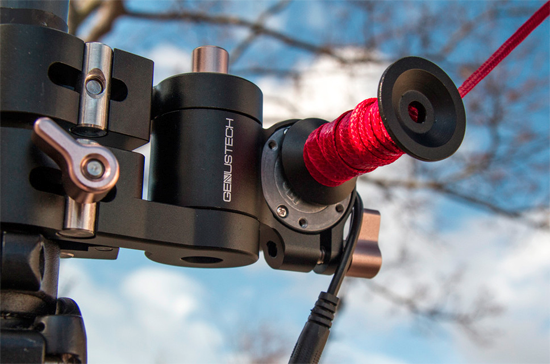 CONTINUED ON NEXT PAGE —>

The Genus MoCo is a really simple design – almost laughably so, like “why didn't I ever think of this?” kind of design. But as simple as it appears, it's still a solid-built piece of gear from Genus as we've come to expect. I tested with a couple heavy cameras and while the Mini Jib was bowing significantly, the MoCo had plenty of torque to handle the job (jib-job?).

I put the Blackmagic Design Pocket Cinema Cam on the Genus MiniJib with a 35mm Rokinon Prime lens and set up the MoCo to do a slow crane-up move while I shot video in this test. The movement is really steady until the cord that winds-up “slips” or jumps off an previous winding. I would think a better solution to this would be an alignment guide like a fishing reel that moves the cord evenly across the surface of the winder and returnes side-toside. Also I think a round cord would be better suited than the flat ribbon which twists during use.

Here's a couple video clips from this test:

The Genus Mini Jib is a brilliant design for an ultra-portable location shoot. The build quality is as you would expect from Genustech and even with the added weights (that you provide) in the carrying bag, makes it an easy to transport item along with your tripod to the next remote gig. And at a price point of under $400, it's a no-brainer for the indie filmmaker or student project that will garner professional results. The Genus MoCo is very simple in design and I could see rigging it for other movements as well like a dolly/pan move. I'd like to see a more sophisticated design in the future that lets you set a specific rate digitally for extended time lapse shots.