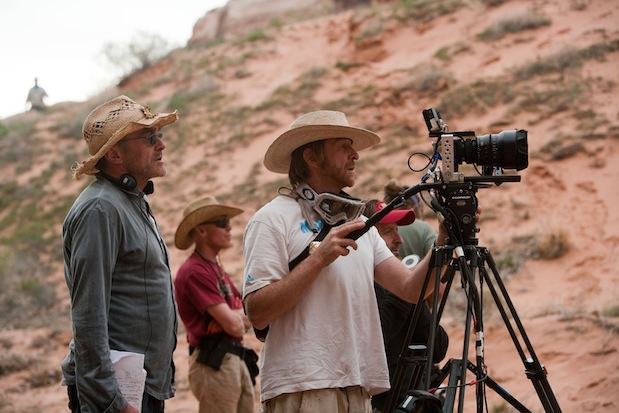 With Academy Award nominations out, the movie awards’ season is now at full heat. In the cinematography category, last year’s big bling collector-the innovative Anthony Dod Mantle-wasn’t nominated this time around for a chance at back-to-back Oscar or ASC awards, although he and “127 Hours” co-DP Enrique Chediak were nominated for a BAFTA award for their work on that film. Still, when I reached Anthony recently by Skype after he had just wound up a long day of golf in Cape Town, South Africa, where he was shooting a European 3D sci-fi feature called “Dredd,” he chuckled about his doubts that “127 Hours” could earn him the same award recognition as “Slumdog Millionaire” did last year. He suggested that perhaps “127 Hours,” this year’s collaboration with director Danny Boyle, was “just a little radical for common taste.” Nonetheless, as with “Slumdog Millionaire” before it, “127 Hours” featured extensive and unique utilization of the Silicon Imaging 2k camera system that Mantle has been on the forefront of pioneering in feature films in recent years. He was gracious enough to spend his time recovering from golf to discuss those applications, and more, with me.

We also discussed his background with Boyle and his interest in small, mobile cameras, mixing formats, shooting 3D, and much more. Anthony was so interesting and passionate about these topics, I’m offering them here in podcast form in two parts. Click below for part I, in which Anthony discusses his relationship with Danny Boyle, the evolution of his work with the SI2K system, and his work on “127 Hours.” And check back here in a few days for part 2, in which he explains his views on the industry’s digital transition, his artistic preferences, and his views about working on stereoscopic projects and 3D, in general. FYI, the audio quality is not pristine as Anthony was without headphones when we chatted, but I think you’ll find it informative and well worth a listen.

The Adventures of Anthony Dod Mantle, Part I from ProVideo Coalition on Vimeo.