The RK345 is ineffective against plosives & excessive breathing sounds. For close speaking, Shure and I both recommend the A7WS, not the RK345.

Sadly, most people I see and hear vía the Shure SM7B, MV7 and MV7x microphones are using the wrong windscreen for close talk and —as a result— are suffering terribly from plosives and excessive breathing sounds. Those users must not have read Shure’s own written recommendation about this and they must not have listened to their own recordings carefully. (Later, we’ll quote Shure about this.) The same applies to people who blindly followed the myth that “mic technique” (speaking at a 45 degree angle of the microphone) “completely” prevents plosives. In reality, doing that only reduces their likelihood somewhat, i.e. the rhythm method. Those presenters/hosts who seem to be immune to plosives are likely using either Accusonus ERA or Izotope RX to mask them in post-production (or are as adept as Frank Sinatra). Using those software tools is time consuming and not applicable to live production anyway. Ahead are dramatic audio/video proof of my statements, examples and more.

In the field of phonetics, a plosive, also known as an occlusive or simply a stop, is a pulmonic consonant in which the vocal tract is blocked so that all airflow ceases. In the world of audio production, it’s when a terrible side effect from one of those consonants (often P and T) cause a huge peak which oversaturates the microphone capsule.

SIDEBAR COMMENT: No pop filter or windscreen will ever eliminate popping sounds actually created by the mouth. Those are the ones that you would hear if you were in the same room and the person just made a popping sound, whether intentionally or unintentionally.

Together with the plosive problem is a similar one, which are excessive breathing sounds. 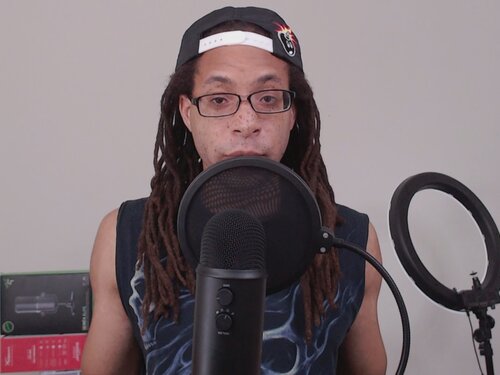 With the exception of a few snap-on pop filters made for certain microphones, the typical large round pop filters on a gooseneck are too large to be visually attractive. They even tend to block the face of the singer or presenter/host. 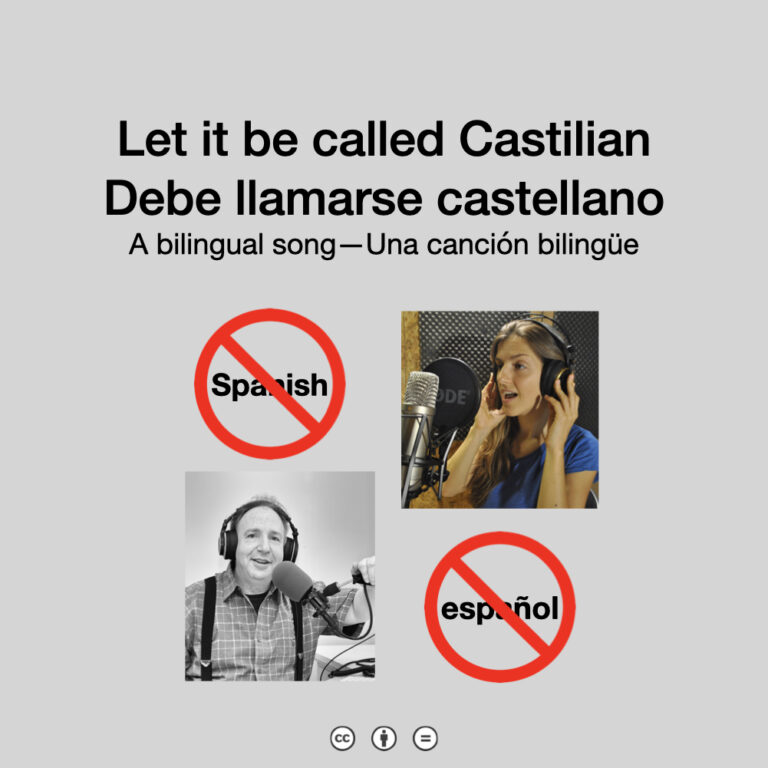 The cover art of my bilingual indie song Let it be called Castilian — Debe llamarse castellano features renowned voiceover talent and Spaniard singer María Esnoz pictured with her RØDE microphone and attached pop filter. In the other photo, I was using the A81WS, aka the “presidential windscreen”, used for many decades at US presidential inauguration ceremonies.

Good windscreens (like the A7WS, A81WS and WS2 when properly mounted) are very good for both plosive prevention and for reducing excessive breath sounds… and also look great on camera compared with huge round pop filters with independent goosenecks.

The famous Shure SM7B (US$399) probably needs no introduction nowadays. The SM7B includes two windscreens. Sadly, most host/presenters I see are using the inferior RK345 instead of the superior A7WS. The RK345 is ineffective at taming plosives and excessive breathing sounds when used closely, as proven by the majority of presenters/hosts.

In the official SM7B User Guide, in the very first paragraph, Shure states:

“In addition to its standard windscreen, it also includes the A7WS windscreen for close-talk applications.”

Source: here. I completely agree with Shure about this.

What happens in this official Shure video embedded below reminds me of an anecdote when a nice woman who (many years before I was born) was demonstrating a particular brand of so-called “unbreakable” dishes in a retail store in Westchester, New York. The woman (who years later became my own grandmother) was embarrassed when her demonstration failed when the dish she assuredly and enthusiastically threw to the ground instantly shattered into many pieces in front of her live audience. When it’s live, there is no “undo”. I am quite surprised that neither the Shure host/presenter in the video below —nor anyone else on her staff— heard the innocent and undesired plosive at 0:40 (40 seconds in). That fact proves that the technique of speaking to the microphone off-axis is about as effective at preventing plosives as the rhythm method is in a very different context to prevent a different undesired consequence.

Both speaking off axis to the microphone and the rhythm method reduce the probability of the undesired result, but neither is reliable enough to be able to count on it as absolute, unless perhaps you are as adept at mic technique as Frank Sinatra was. I am not sufficiently adept at that and Laura Davidson of Shure has proven in the above video that she isn’t either. I am not surprised that she recorded the video (since she evidently felt sure of the technique before doing it), but I am surprised that she apparently didn’t listen to it carefully before publishing it. Shure published the above video in the Shure Creators channel on YouTube here on September 24, 2021 although I wouldn’t be surprised if Shure may have taken it down by the time you click there. If that happens and I receive a confirmable request from Shure for me to remove it from here, I will do so. In the meantime, it’s here to prove the point.

Those presenters/hosts who seem to be immune to plosives while using the RK345 (or the much weaker included windscreen with the MV7, MV7x or FDUCE SL40) will eventually get plosives or are likely using either Accusonus ERA or Izotope RX to mask them in post-production. That is time consuming and not applicable to live production.

In addition to all of what I have stated above, an important disadvantage of speaking off axis is that it sadly degrades the natural tone of many microphones. The solution for the SM7B comes included. For the MV7, MV7x and the FDUCE SL40 (covered below), the ideal solution is the A7WS for under US$25.

The FDUCE SL40 broadcast microphone (which I recently reviewed) 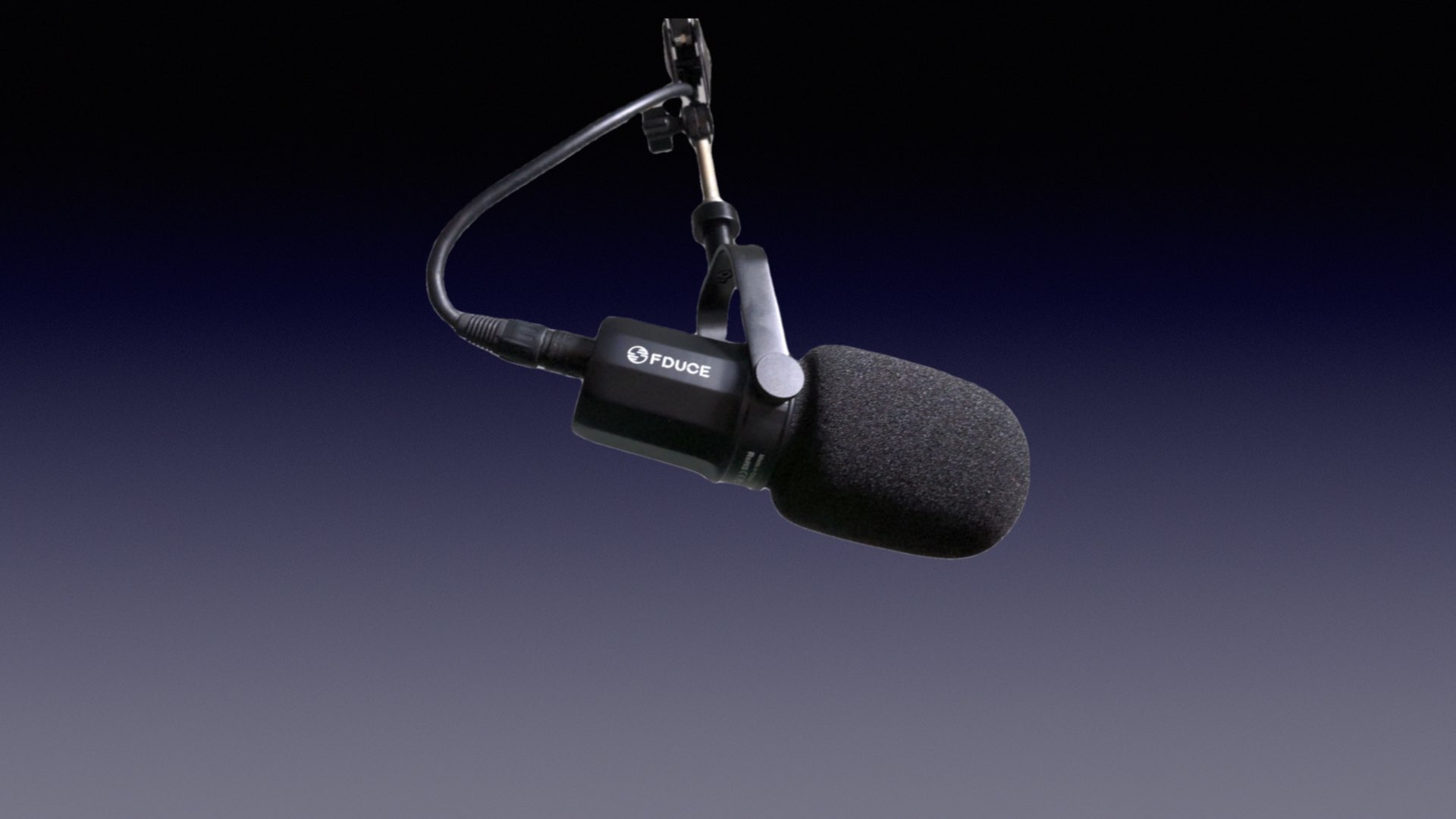 In case you missed it, here is a link to the recent Review: FDUCE SL40 studio dynamic hybrid microphone with A7WS & RØDECaster Pro II (illustrated above). It offers both XLR and USB for under US$100.

My answer to the naysayers

Some naysayers say that using a thick windscreen reduces high frequencies. I happen to love the result through the A7WS and A81WS, not only because they greatly reduces plosives and excessive breathing, but also because they smooth out the voice in an almost spiritual way. If you really believe that you are losing high frequency information (which doesn’t concern me since I love how it sounds), in the SM7B you can boost the high frequencies with a switch. With other mics (if you really feel the need), it is much more feasible to do live EQ, be it in a device like the RØDECaster Pro (II) or in software (even live). That is not the case with software to remove plosives in post. They can’t be used live.

Earlier in 2022, fellow author Rabbi Tovia Singer migrated from the ElectroVoice RE20 with the enormous 309A shockmount to the Shure SM7B, as shown below: 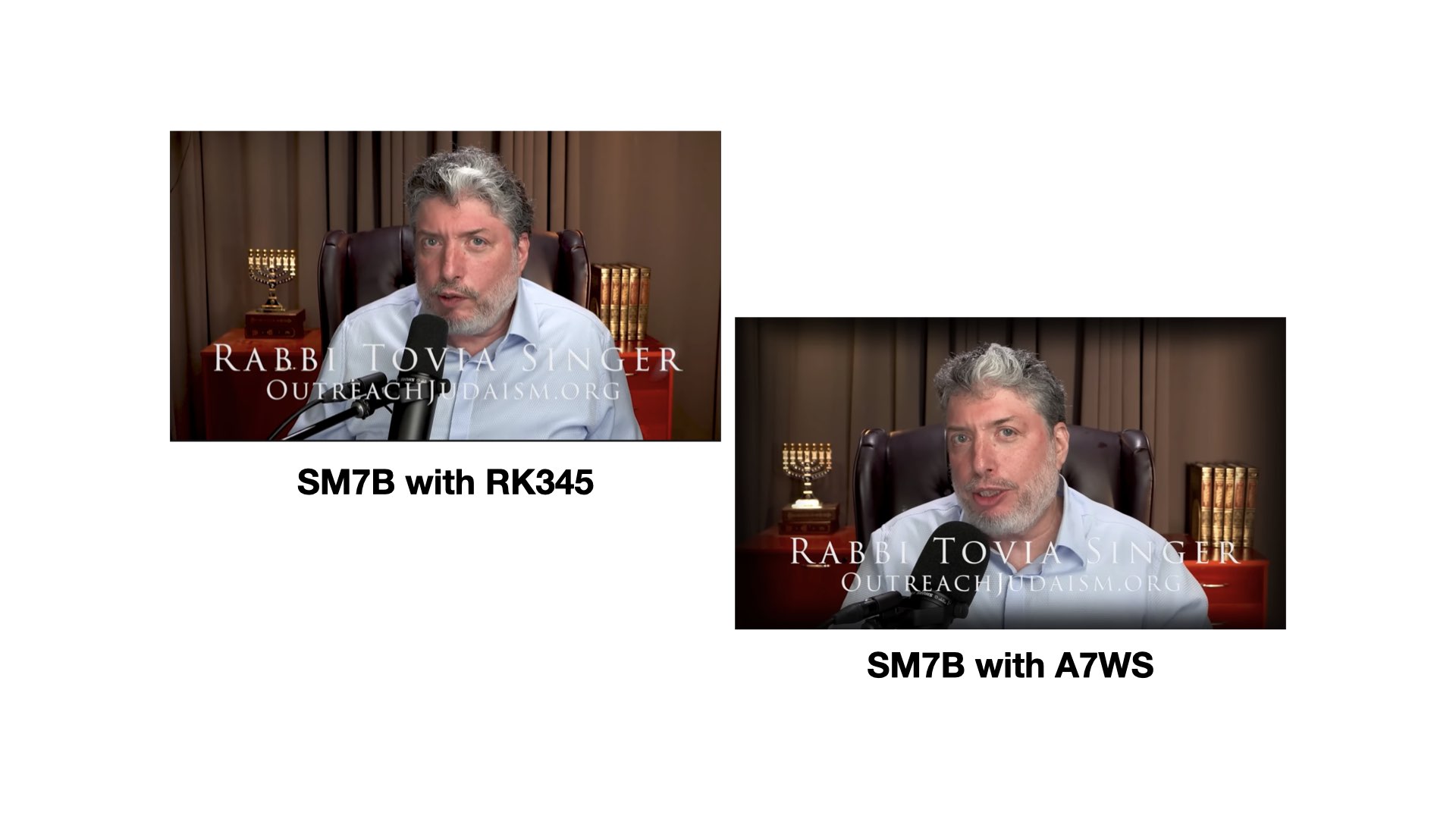 He and I both appreciate his voice more with the SM7B than with the RE20. In addition to the sound, he has saved a huge amount of screen real estate compared with the RE20 plus the huge 309A shockmount. Although at first Rabbi Tovia Singer used the RK345, he is now using the A7WS instead, which is the one recommended by Shure (and by me) for close talking.

The RodeCaster Master also uses the SM7B, fortunately with the A7WS

Although in the thumbnail he is sadly using the RK345, in the actual video, he uses the A7WS as he should.

Other windscreens: A81WS and WS2

I have covered the A81WS “presidential” windscreen in many microphone reviews and it is for mics with a very narrow diameter, both from Shure and other brands. Then I covered it in 2021 in a review, together with the A7WS. Both of those are from Shure. 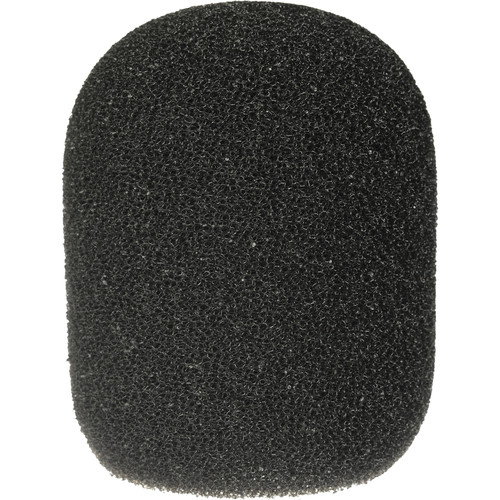 The WS2 (shown above) is from RØDE and fits microphones like the RØDE Procaster microphone (reviewed in 2019, shown below), 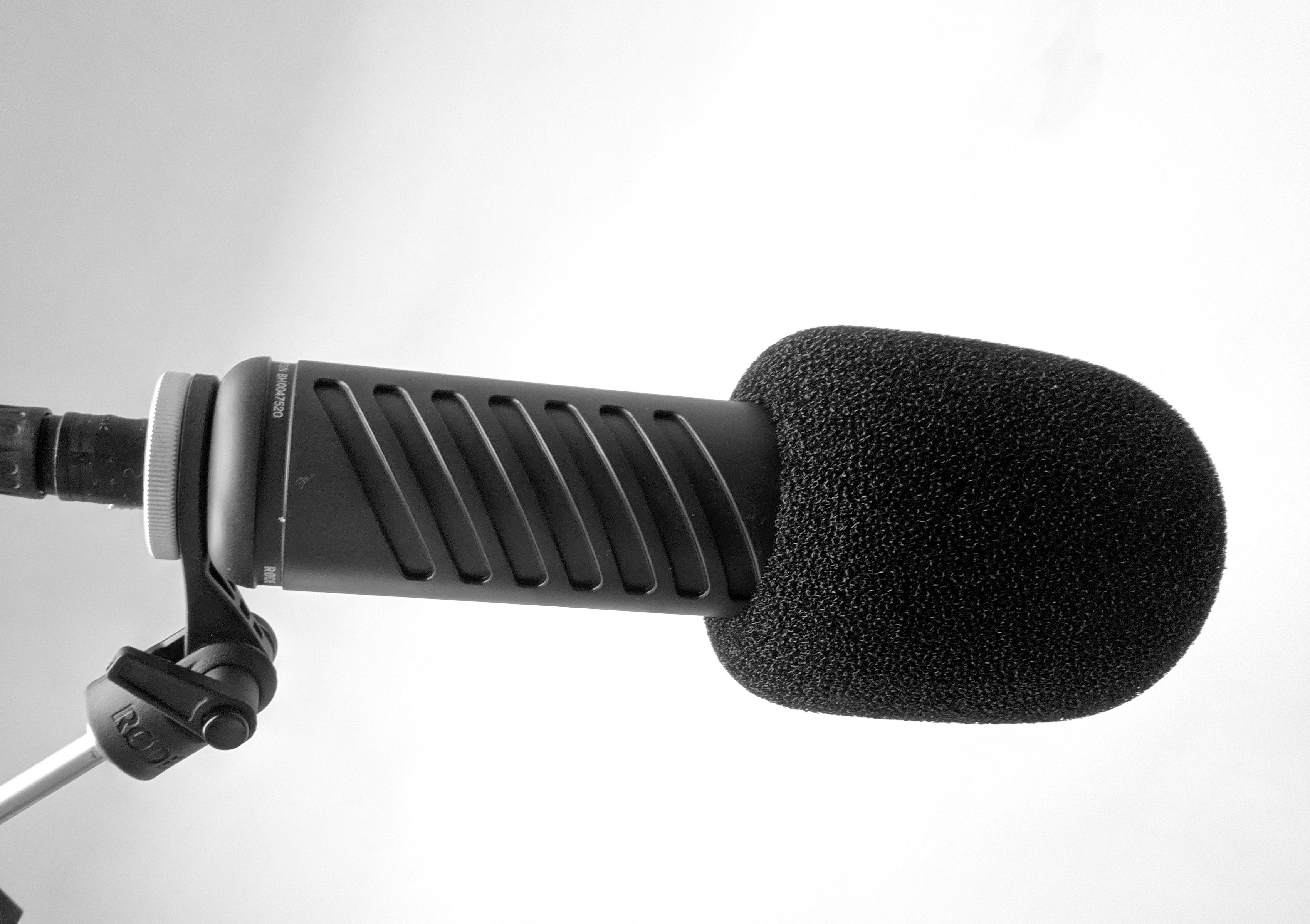 the PODMIC and several others. When mounting the WS2, for best results it’s best to leave some space between the tip of the microphone and the tip of the WS2, which is something I learned more recently.

Many of the above manufacturers have sent Allan Tépper review units, including FDUCE and RØDE. Some of the manufacturers listed above have contracted Tépper and/or TecnoTur LLC to carry out consulting and/or translations/localizations/transcreations. So far, none of the manufacturers listed above is/are sponsors of the TecnoTur, BeyondPodcasting, CapicúaFM or TuSaludSecreta programs, although they are welcome to do so, and some are, may be (or may have been) sponsors of ProVideo Coalition magazine. Some links to third parties listed in this article and/or on this web page may indirectly benefit TecnoTur LLC via affiliate programs. Allan Tépper’s opinions are his own. Allan Tépper is not liable for misuse or misunderstanding of information he shares.