The 3.02 update restores HDMI timecode and record triggering from the GH4

Video Devices today released firmware version 3.02 for the PIX-E5H, PIX-E5, and PIX-E7 monitor / recorders. The headline feature is a restoration of HDMI timecode and record triggering when using the Panasonic GH4; the GH4’s own firmware update 2.5 changed the way it communicated over HDMI and broke those features. The update also fixes an annoyance whereby the waveform monitor initially came up at minimum intensity when the PIX-E was booted; it now comes on at the previously selected intensity. Hooray, then, for update 3.02! 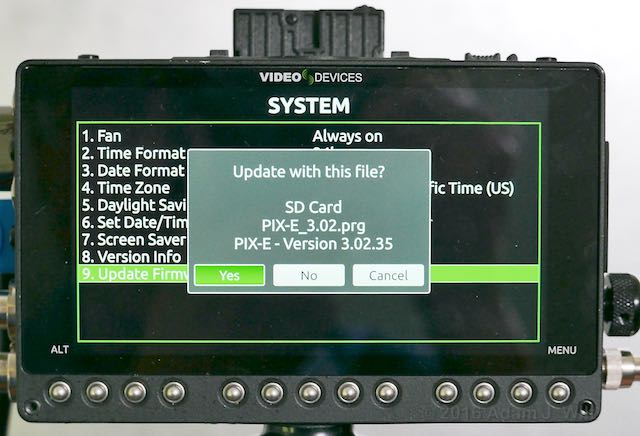 One minor issue: the new PIX-E code changes resolution sensing over HDMI. My GH4s (still running 2.3 firmware, FWIW), with HDMI 4K Down Convert set to AUTO, now feed a 1080p signal to the PIX-E instead of 2160p. Turning the GH4’s downconversion setting OFF restores the full glory of the higher-res feed. Not a problem—as long as your 4K camera has the option of disabling automatic downconversion.

Got a PIX-E? Get the new firmware here.

BTW, keep the previous firmware version handy if you have it, in case you need to roll back. Multiple firmware versions can live on the same SD card and the PIX-E will let you choose among them when you run the upgrade procedure.

Disclosure: I have PIX-Es left over from writing their UI and ‘scope software, but Video Devices isn’t compensating me for spruiking their firmware updates.

Many of you have read my recent reviews of two new Zoom audio products, the ZDM-1 dynamic studio microphone...

Here is my detailed review on the recently released Zoom H8 multitrack handheld recorder. As you will see ahead,...