Via a free update to all RØDECaster Pro unit, there are even more new features.

Frequent readers know that I have been covering (and using) the 48-kHz exclusive RØDECaster Pro audio mixer/recorder/virtual cart player and hybrid replacement for standard POTS phone calls since its original announcement in 2018, almost three years ago. I have covered integration with other devices & outboard software and I have published best practices. Now I am here to celebrate the RØDECaster Pro’s upgrade to palindromic firmware 2.1.2. I’ll cover all of its new features together with my comments. 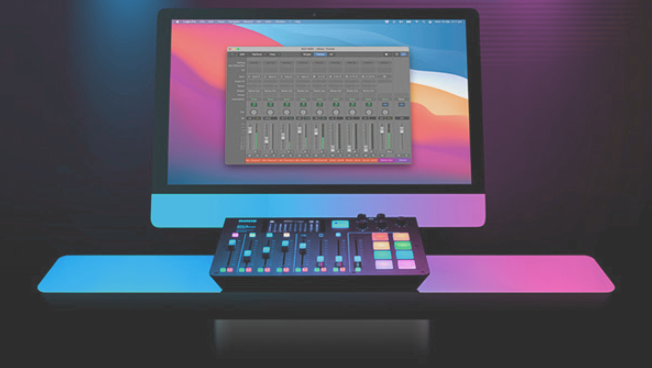 I object to the term “sound pads” and prefer to call them carts or virtual carts because pads are already part of professional audio jargon and refer to something quite different. Pads (in the professional audio world) refer to attenuators, something we use to reduce an audio level that is too strong for an input to accept without distortion. So far, at least one reader objected to my preferred term (virtual cart) even though audio carts(cartridges) have been part of live radio and TV jargon for over a half a century. The same reader also objected to “sound pads”, since he was unfamiliar with both terms. I use the one that I consider best, but I always mention the other one at the beginning just in case.

Ahead I’ll give you more details about these three additions to the RØDECaster Pro, together with my comments.

Nine language options for RØDECaster Pro and its companion app

I am very glad that RØDE has added the eight additional languages, so we now can choose among Castilian (castellano), one Chinese language (I’m awaiting RØDE’s response as to whether it is Mandarin or Cantonese, since they do vary even in writing according to experts), English, French, German, Italian, Japanese, Korean and Portuguese.

I am especially grateful that Castilian (castellano) is now included, since it’s the language of my award-winning CapicúaFM show and many of my published books. However, RØDE has sadly fallen into the trap of calling the Castilian language “Spanish” (“español”). RØDE, Please fix the Language menu to display the proper name of the Castilian language: castellano. There are currently seven (7) official languages in Spain, and all of them are Spanish languages (in plural). These seven (7) Spanish languages are protected by Article 3 of the Spanish Constitution of 1978, by the respective constitutions of five other countries and by Federal law in Chile. By inaccurately naming the language as “Español”, RØDE is acting as an accessory after the fact to cover up the attempted linguicide (linguistic genocide) crimes attempted in the 20th century, and is even breaking the law in at least seven (7) countries where the Castilian language is protected by local legislation. For more details, please see my book The Castilian Conspiracy, which is the English adaptation. The original is available in Castilian as La conspiración del castellano.

MIDI control, not just for musicians

With bidirectional connectivity and mix-minus functionality shortly after its initial release, the RØDECaster Pro has already been a great partner with a computer (at least with a macOS or Windows computer, but sadly so far, not with a Chromebook: I checked after updating to firmware 2.1.2 and the RØDECaster Pro is sadly still invisible as an audio device via USB from a very recent Chromebook.). With the new addition of MIDI control as a feature, the link between the RØDECaster Pro and your macOS or Windows computer is even stronger. This functionality unlocks the potential to control a range of functions on your computer from the RØDECaster Pro, from level faders within certain mulitrack audio (DAW) programs to scenes within a live video streaming software.

The RØDECaster Pro’s MIDI control feature is currently only supported by some DAWs. If you are using another DAW, you may experience different behaviour….

To turn on MIDI control for your RØDECaster Pro running the palindromic 2.12 or later firmware, connect it to the computer that you want to record to using the included USB cable. Then go to Settings > Advanced> Audio> Operations and tap MIDI Control. Once activated, the RØDECaster Pro will be able to control various parameters within a host of programs via MIDI commands – two of these scenarios covered below.

Controlling Your DAW Faders with MIDI

A useful application for the MIDI control feature is to synchronize the faders across the RØDECaster Pro and your multitrack audio program (DAW), allowing you to control the levels for your recording from the console mixer rather than the software itself. Before you can start using MIDI control, you will need to set up a session in your DAW and route all channels on the RØDECaster Pro to their own individual tracks.

Once your session is ready, you can map the MIDI commands being sent from the RØDECaster Pro to its corresponding track’s fader in your multitrack audio program.

For more information about that, visit this RØDE web page.

To set this up, you will again need to make sure MIDI control is activated within your RØDECaster Pro’s settings. For more information about this, visit this RØDE web page.

The new virtual cart modes include the “Swear Button” and “Trash-Talk” modes. These are actually different from what I initially perceive them to be. At first, I thought that with the “Swear Button”, RØDE had added an traditional delay to press when a phone caller or guest unexpectedly said an offensive word, so that the operator/host/presenter could press the button within a few seconds to prevent it from going out on air. However, the “Swear Mode” is not that, and at least so far, RØDE has not added any delay option to the RØDECaster Pro. I would define it as: “premeditated self-censorship”.

Whenever the host/presenter/operator presses the pad in Swear button mode, all channels will be muted and the sound on the pad played. When activated, the sound on the sound pad can be replaced with the classic ‘beep’ tone to mask profanities.

The idea is that the host/presenter/operator must realize in advance that s/he is about to swear. This will fit the style of some hosts/presenters, but certainly not mine.

In trash talk mode, the audio outputs to the USB, Bluetooth and phone channels will be muted, therefore any guest on the other end of these channels won’t be able to hear anything. This can be handy for cueing guests before bringing them onto the podcast or if you’re in a prank call situation and you want to talk amongst your physical guests without the caller hearing.

An example where I see this as useful is if you have a live call-in radio show, and a particularly long-winded caller is on the verge of outstaying her/his welcome, the operator might press the Trash-Talk button to consult with the producer or local co-host: “Should we dump this one?”