Smartphones are great tools for photography and video, but while they have evolved technologically, their ergonomics are less than stellar: miggo has the solution with Pictar Pro, the new version of the company’s camera grip and app. 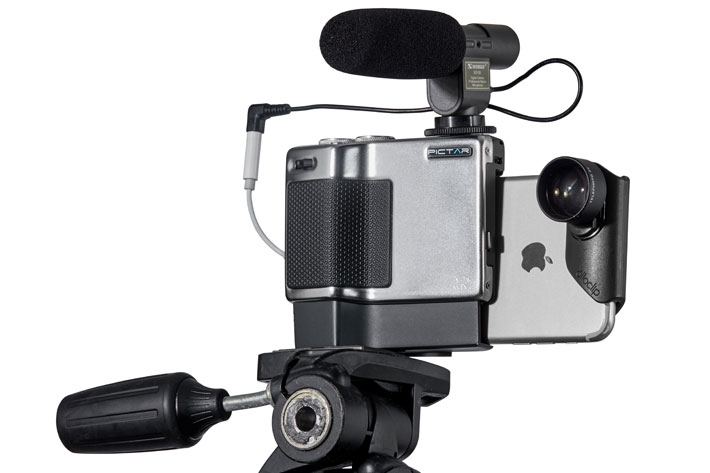 Less than two years after introducing the Pictar One, miggo is back on Kickstarter with a new product: the Pictar Pro,  a camera grip with advanced video features, for iOS and Android smartphones.

Introduced in 2016 through a Kickstarter campaign, the Pictar One was made available in 2017, with two versions: Pictar One, designed to accommodate standard sized iPhones, and the Pictar One Plus, conceived for the plus-sized iPhone. The camera grip for smartphones is the result of extensive research into how users capture images with their iPhone, that revealed an uncomfortable grip and poor control over features were the main shortcomings. The grip, which really transforms a smartphone into a comfortable imaging device that feels like a real camera has the essential buttons to control functions and is, as I’ve discovered, better than the grip present in some real cameras. 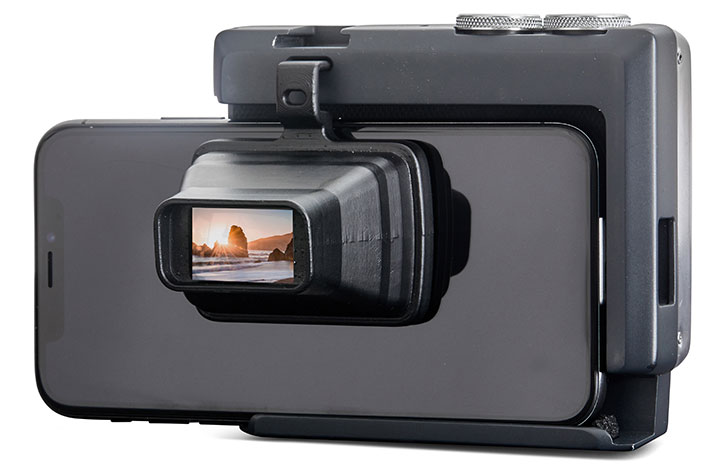 The grip by itself would not help much beyond holding the smartphone so miggo developed one app that works with the camera grip. The app transfers to the buttons on the grip the functions of the phone, using high-frequency dual tone sounds. Each time you press a button or turn a wheel, the Pictar One grip emits a sound that – when detected by the app – generates a corresponding action. The high-frequency dual tone (18,500 – 20,000 kHz) is inaudible to the human ear but makes the magic happen.

The Pictar One was, until this Summer, exclusive to iPhone owners. When I first wrote about the product, in July 2017, I commented it should be made available for more smartphones, “as it really seems to be a solution for those who always carry their camera in their pocket.” Well, this Summer (2018) miggo introduced the app for Android, and I had a chance to try the Pictar One with my smartphone, an experience about which I wrote here at ProVideo Coalition. 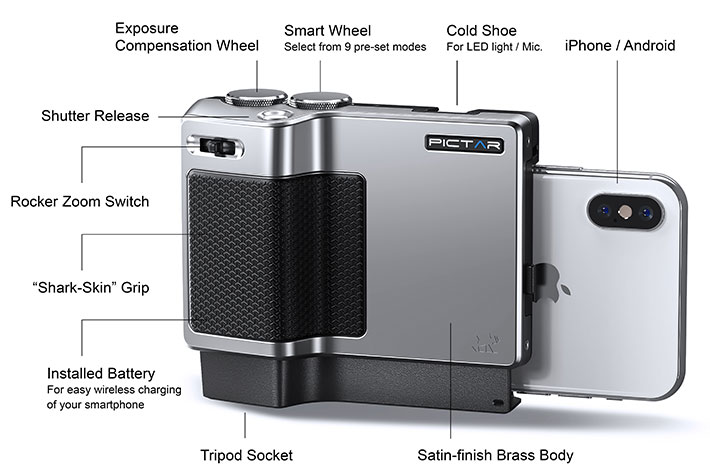 I still want to write more about how the Pictar One changed the way I take photos – and some video – with my smartphone, but one note I can write here now: I never leave home without the Pictar One, because it really is a game changer when it comes to taking pictures with a smartphone. In less time than it takes to write these lines, I slide my smartphone in the Pictar One, and I’ve a stable camera in my hands, with a set of controls that make it more user-friendly, and make picture taking more fun.

So, now miggo has taken the next step, designing the Pictar Pro, which is based in the same concept, but takes things further, offering users a new camera grip that takes all the features of the Pictar One and upgrades them further. The company refers to the new product as “bridging the gap between phone and DSLR” and while I would not go so far, I admit I agree with the second idea suggested: “use your phone like a real camera”. 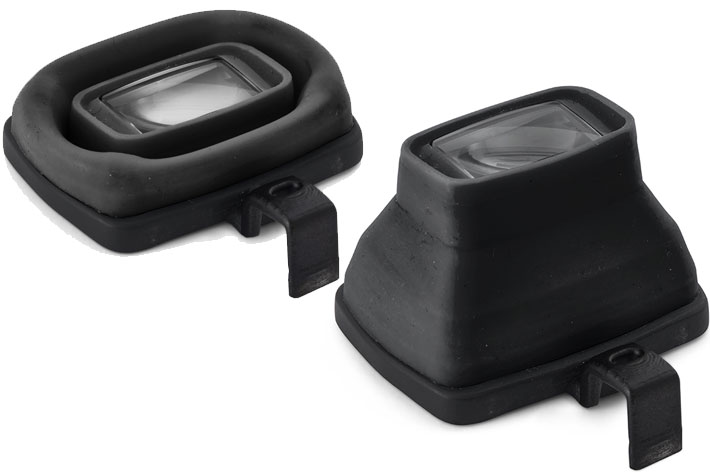 A viewfinder for your smartphone

You’ll immediately note that there is an optional viewfinder available, as well as a  connection revealing that there is an installed rechargeable battery for wireless phone charging while shooting (capacity: 1400 mAh). There is more, though, as the Pictar Pro offers, besides new features for photographers, advanced video features, including, according to miggo, frame rate, video stabilization, white balance, shutter speed, zoom speed and more…

The optional viewfinder is a most welcome accessory for photography, but also for video, as I’ve discovered using the Pictar One… which does not have that option. This accessory, compatible with the Pictar Pro, makes it viable to check the screen when shooting outside in sunny days, something almost impossible in regular conditions. When you connect the viewfinder that automatically shrinks the image down on the phone to the size of the viewfinder via proprietary technology.  Via an optical plastic lens, the user can now view the image even under bright sun. 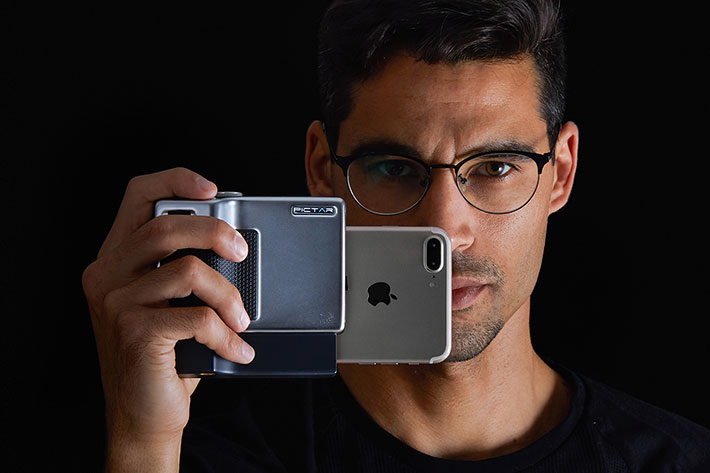 The new Pictar Pro is larger, offering a more substantial feel, and that has allowed the cold shoe on top to be bigger, ideal to place either an LED panel for lighting or an external microphone. The Pictar Pro is also “ Microphone Ready”, with a designated side-window that allows cord connection (needed for some phones), something missing from the Pictar One. The tripod socket at the bottom is kept, inviting users to use a tripod for some of their video or photography. The system is also designed in such a way as to allow users to adapt external lenses to the smartphone.

The new Pictar Pro will help users to get the best out of their smartphones, both using features that would otherwise not be completely explored and features that the camera grip makes available. The larger new classic satin-finish brass body with a sturdy camera grip that provides the feeling of a real camera and allows for one-handed shooting is immediately noted, as are the four external larger control wheels and buttons for easy one hand and one-touch use with better control over the camera’s features for sharper pictures.

Smooth motion of the zoom

The controls are similar, but larger. There is an exposure compensation wheel for superior control over the exposure and darkness or brightness of the image, a multi-state shutter release button with two modes, a half-press to lock the focus and exposure, and a full click to shoot, a smart wheel, rotated left and right to switch between 9 different shooting modes and a new Rocker Zoom Switch, designed for ease of use and continuous smooth motion of the zoom, even in video shooting. Simply depress it to change from front-to-back camera for selfies.

The Smart Wheel  gives access to switch between the different shooting modes: Auto, Shutter Priority, ISO Priority, Manual, Macro, Video, Selfie, Sport and Filters. Press the wheel to switch between the different flash modes.  The button can be easily programmed to change its function via the application. The app and the camera grip from miggo also allow users to control shutter speed  for “freezing” or blurring the image, adjust ISO for “cleaner” pictures, use advanced image formats, JPEG/TIFF/RAW and explore a larger zoom range to get even close to the subject photographed. The number of features available will, again, depend on the smartphone used, as some options are not available for some models, as I’ve found with my Android model. 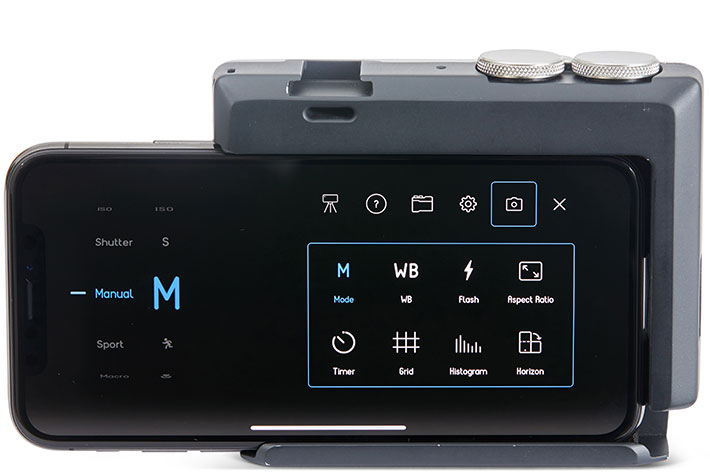 Still, what the camera grip offers, and this note is based on my use of the Pictar One, elevates your smartphone to a new level in terms of photography and video. The now announced Pictar Pro will only raise the bar. Designed to fit all sizes of iPhones (from 6 to X, including all Plus models), and a wide range of selected Android, the camera grip is future proofed for new iPhone models that will be launched soon. Included are a hand strap and neck strap made from a stylish parachute cord with real leather elements, and a premium quality fabric pouch for keeping the Pro when not in use.

“Photography is about capturing the moment, not digging around menus to figure out the best way to capture the moment,” said Guy Sprukt of miggo.   “Pictar Pro helps take control of your photography along with the best-quality video not possible with the smartphone camera alone.”

Pictar Pro unlocks smartphone possibilities (for both iPhones and Androids) to enjoy remarkable camera control and creativity not possible with the smartphone camera by itself.  Starting October 2, 2018,  anyone can back the development of Pictar Pro on Kickstarter.  Pictar Pro is estimated to retail for $245, which includes the Pictar Pro unit, carrying case, neck strap, wrist strap, viewfinder, charging cable, and Pictar app.  The final product will be available, if all goes as planned, in March 2019.