Introduced in two versions, the Pictar One and the Pictar One Plus camera grips from miggo were initially only available for iOS. Now the accessory is also compatible with Android. 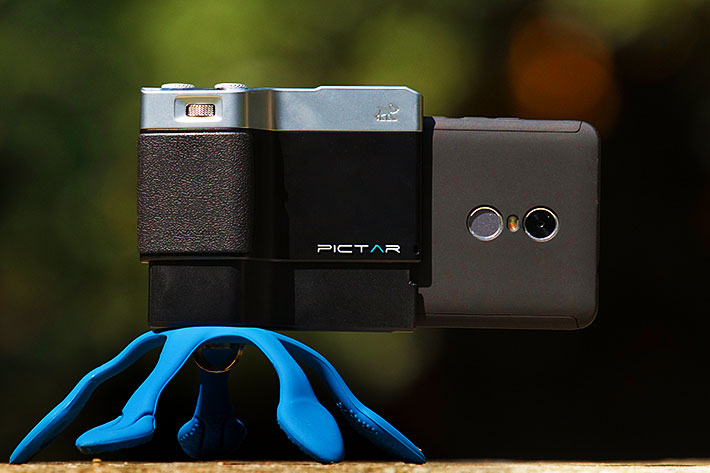 Modern smartphones have good cameras, but if you want to take your photography to a higher level, you need a proper way to hold and control them. There is a solution from miggo, the Pictar One Plus, now also available for Android.

Hostage of the Windows Phone system, in July 2017, I had little hope that miggo would make their accessory Pictar One or Pictar One Plus (for larger models), compatible with the now dying/dead Microsoft smartphone project. Recently I started to use one Android smartphone, and while I use its camera as a sketch book and a photographic tool, I continue to dislike the ergonomics, which make it difficult to hold the smartphone when photographing. I always imagine I will drop the phone while I fumble with the controls, and it is in no way as steady as a compact camera with a real grip. Or it wasn’t, until miggo created the Pictar One. 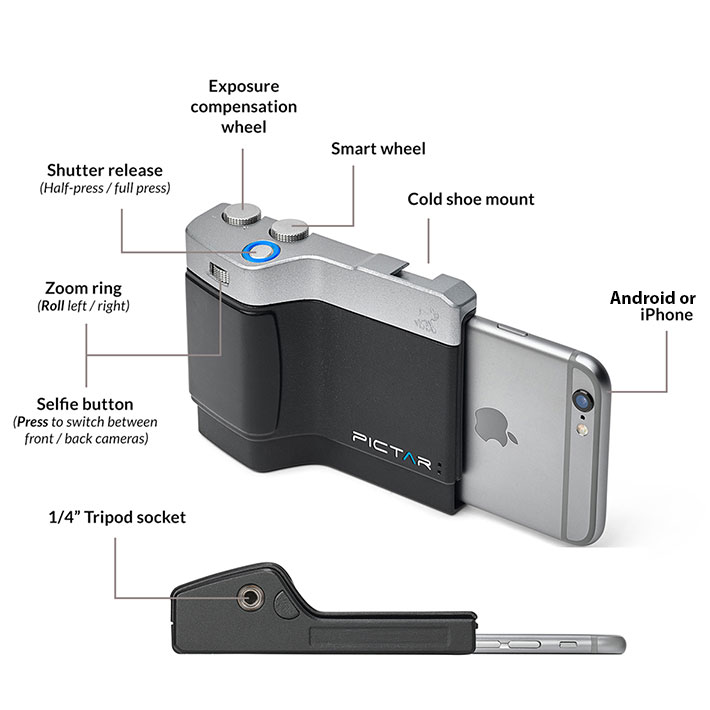 The creators of the product present it as the way to “DSLR your iPhone”. While I do not think the Pictar One transforms my smartphone in a DSLR, it is evident, now that I’ve had the chance to test the Pictar One Plus, that the accessory turns your smartphone in something that feels like a camera you’re holding in your hand. Yes, as miggo also states, the Pictar One “converts your phone into a real camera”. It may be a compact camera, but it surely feels good.

No, this is no magic interface that takes the quality of the images captured to a new level, but one thing you’ll discover once you start using it is that your images will be sharper. Because the camera grip offers you an ergonomic and stable way to hold your camera, you’ll have more keepers when shooting. But the Pictar One is more than a grip: it really transforms your smartphone in a better camera, because it gives you access, through a series of buttons that serve as interface, to the photographic functions present in your smartphone’s camera.

Until recently only iPhone users had access to this advantage, but now the Pictar One Plus Mark II camera grip also works with Android models, through a user-friendly app available to download from the Google store. I’ve written about the magic under the hood before, but let me refer it again:  the Pictar One Plus Mark II is controlled by no fewer than five external buttons and includes a patented, revolutionary interface which uses sound frequencies to activate the camera, which saves battery power compared to the standard Bluetooth connection. 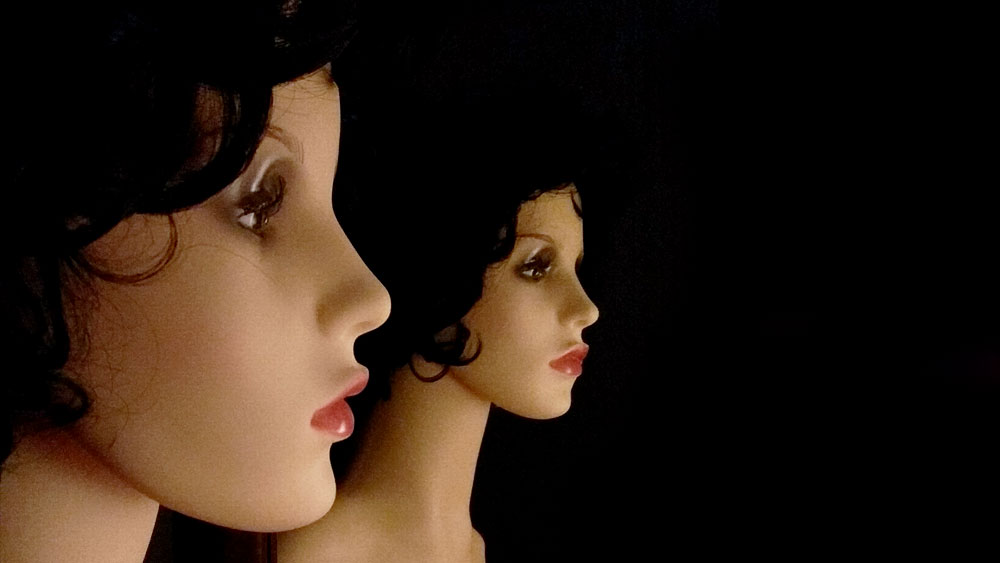 Pictar One Plus Mark II was born to address mobile photographers of all levels – from social recorders to professionals – who wish to get more from their smartphone camera and miss that good-old feeling of firmly holding and easily controlling a traditional camera. The accessory is easily carried – in its protective purse – in a pocket, and can be picked up anytime you want. Insert your phone in place, activate the app and you’re good to go.

The camera grip and app will not give you more than your camera does in terms of functions, but makes it user-friendly to access and explore all the potential of your smartphone.  The five external buttons provided include a multi-state shutter button that offer a half-press to lock and recompose or a full press for immediate shutter release, a zoom-ring, a selfie-button, to switch between the phone’s cameras, an exposure control wheel and a smart wheel that  gives access to the multiple exposure modes and can be programmed for other functions by advanced photographers.

The Pictar One Plus will only give you a better interface to functions available in your smartphone, so if your phone is not compatible with some modes, as Shutter priority, for example, you’ll get a warning on the screen that the function is not active. In my case, the zoom ring is also something to forget, as the digital zoom reduces quality drastically. The list of smartphones compatible with the accessory is available online, but the app from miggo is compatible with more Android phones than those present on the list. The Xiaomi REDMI Note 4 I use is not included in the list, but after a quick exchange of emails with miggo, their technical team suggested it would work. 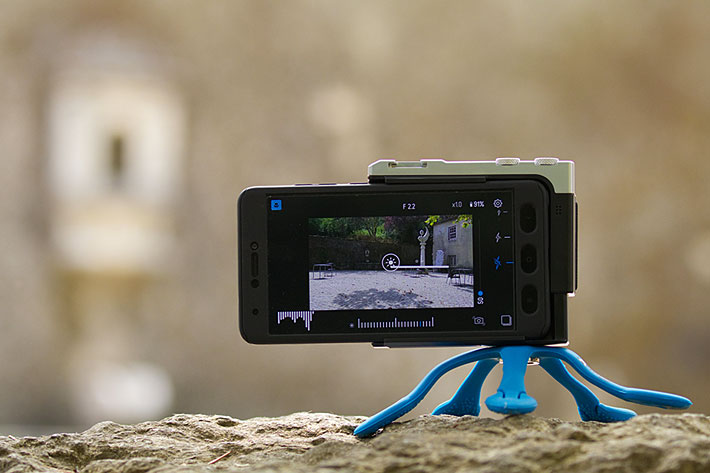 I can confirm now that the Pictar One Plus app works perfectly in my smartphone. It will crash now and then, usually when I try to move quickly between functions, but a simple reboot of the phone gets everything running perfectly again. Now that I am aware of the functions my phone does not offer, it is easy to select only those I can use, which are more than enough, and that has, I believe, taken my willingness and enthusiasm to use the camera in the smartphone to a whole new level.

The app, together with the interface provided by the camera grip, completely changed, for the better, the photography I make with the smartphone. Not only do you have a logical, camera-like interface to control your exposure, white-balance and other functions and features, you also have a grip that makes it feel as if you’re holding a camera. Now, instead of fighting to both hold the phone properly and press virtual buttons on the screen, I can use my index and thumb to select everything, while holding the phone… as a camera.

With the Pictar One Plus you’ve more time to concentrate on what’s important: creative ways to make your photographs. I believe the less than desirable ergonomics of the smartphone are responsible for people not using them so much as a serious photographic tool, and more for snapshots. While I know that no smartphone will be a substitute of a real camera, the Pictar One Plus is a good compromise to make your smartphone feel as much, as possible, like a camera. So, my advice for you after testing the accessory from miggo is simple: if you are serious about your photography and use a smartphone, get a Pictar One Plus and discover a whole new world.

I did not want to publish this review without illustrating it with some of the photographs taken in recent days, using the accessory. They go from images taken while scouting places for future photo opportunities to some “studio work” photographing some of the cameras from my collection. I want to develop this idea further and hope to write another article centered on collections, but right now I wanted to show these examples that, yes, could be created without the Pictar One Plus, but were much easier to setup because I could hold the camera the right way, and control functions faster than it took to write the whole line you just read.

So, if you’re serious about your smartphone photography, a Pictar One Plus should be in your pocket all the time. You can still grab a snapshot with the bare smartphone if you feel like it, but if at any moment you feel you want to get some steadier images and give yourself an interface for better creativity… pick the Pictar One Plus and use it. The camera grip is also good for moving images, although I believe that if you’re much into video you should look at another solution to hold your camera, something like the products from Shoulderpod. This said, the Pictar One Plus camera grip has a cold shoe which will take a small LED light or a microphone. 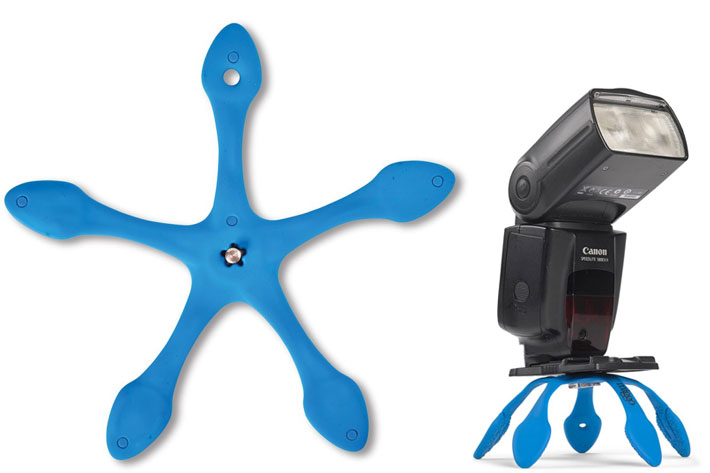 The camera grip also has a tripod mount, which takes me to another product  from miggo that makes sense to acquire with the Pictar One Plus: the Splat Flexible Tripod for P&S and Mirrorless Cameras. I’ve reviewed the Splat for DSLRs before, but this is a smaller tripod (I would call it a fivepod, as it has five legs…) that fits your smartphone or small cameras and can hold them in countless positions on any surface. Its five durable and flexible legs grip almost anything including thin elements such as branches and fences, and the “fivepod” can also be used to place small LED lights anywhere you need them. One of the legs has a hanging eyelet, not hard to find uses for it…