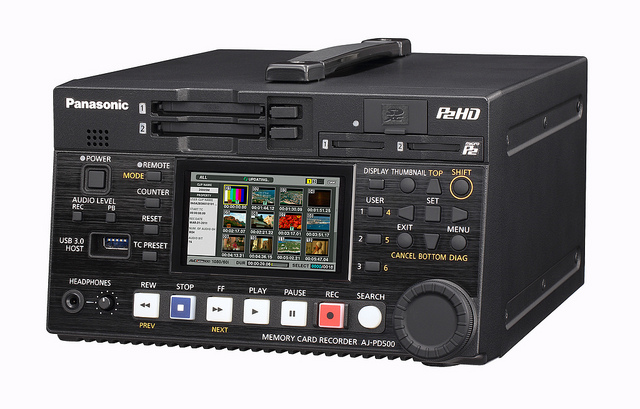 Panasonic today announced the AJ-PD500, its first P2 HD recorder with native AVC-ULTRA recording and built-in microP2 card slots. The PD500 is also the first P2 deck that will record in full-resolution, 10-bit 1080/60p (in AVC-Intra100).

Its range of format choices (including AVC-LongG and AVC-Proxy as standard, and AVC-Intra200 and AVCHD playback as options) and variety of professional I/Os make the PD500 ideal for implementations such as production, post-production, long-form documentaries, live event systems, satellite facilities, reality television, news trucks, and as a redundant playback/record device in news facilities.

Panasonic’s AVC-ULTRA offers master-quality and/or low-bit-rate 10-bit, 4:2:2 recording in Full HD to meet a variety of user needs from mastering to transmission. AVC-LongG, designed for applications where file size is critical, offers up to 10-bit, 4:2:2 sampled recording in a much smaller file size, saving storage cost and transfer times over MPEG-2 while maintaining equal or better video quality. The PD500 incorporates a selection of AVC-LongG quality levels, including AVC-LongG50 (10-bit, 4:2:2) and AVC-LongG25 (4:2:2, 10-bit).”

AVC-Intra200 recording, at twice the bit rate per frame of AVC-Intra100, is virtually lossless, delivering a master quality codec in an affordable, file-based half-rack recorder.  AVC-Intra200 recordings are suitable for network-level programming, film-outs, and higher levels of color correction, as well as green screen and compositing. Also, recording premium programming in AVC-Intra200 today will facilitate up-rezzing to higher-level formats in the future.

Addressing the need for high-speed file exchange, AVC-Proxy encodes are made in parallel with higher bandwidth production formats. AVC-Proxy enables fast, efficient offline editing, at bit-rates from 3.5 megabits down to 800 kilobits per second.

The PD500 has two built-in slots for the company’s new microP2 cards, which have an SD card form factor (see separate news release). The PD500 also has two standard P2 card slots,* as well as an SD card slot for proxy/metadata and AVCHD recording. 12V battery-operated, the PD500’s rugged, half-rack design holds up to the demands of field production, yet at under 4 1/2 pounds it is small and light for easy transport.

Other powerful features include an intuitive, multi-control jog dial; native 1080 24p recording; 1080/24PsF input/output; a super-fast USB 3.0 interface; four channel AES/EBU Digital audio (on BNC I/Os) and two-channel analog audio (on XLR I/Os). This ultra-reliable, dedicated deck allows users to play back and review footage on its 3.5-inch, 16:9 LCD screen; manage clip files and metadata; record full resolution, 10-bit quality content from a wide range of Panasonic and non-Panasonic cameras via its HD-SDI input; and back up data onto external hard disk drives. The unit plays back HD/SD content automatically (no need to change settings) and is internationally operable in 50Hz or 60Hz.

The PD500’s “SuperSpeed” USB 3.0 host interface permits super-fast transfer rates of up to 4.8Gbps. This allows users to easily transfer content to low-cost hard disk drives or solid-state drives for a fast and safe deliverable to clients. When attached to a computer, the USB device mode allows the PD500 to become a two-card microP2 or P2 drive. In addition, users can connect a hard drive to the PD500, allowing the preview of non-real-time content. This functionality allows for the confirmation of content copied to a drive, and for the reviewing of previously-shot content on a drive.

The recorder’s HDMI output enables the transmission of uncompressed digital data to an array of consumer playback devices (video projectors, digital televisions). The deck offers an RS-422A control, thereby allowing it to be controlled as a video source by nonlinear editing systems and color correction systems. The PD500 features 3G-SDI for 1080/60 input/output, and Gigabit Ethernet connectivity for network use. The PD500 also includes a headphone jack and speaker, timecode in/out and a reference sync input.

Additional valuable features include up/down conversion, a USB keyboard connection for easy metadata input, waveform and vectorscope display functions, and a selection from among various functions for allocation to six user buttons.

The AVC-Intra200 and AVCHD playback options will be available when the PD500 delivers.

*The PD500 does not support spanned recording between the microP2 and standard P2 cards slots.


All brand and company/product names are trademarks or registered trademarks of the respective companies. All specifications are subject to change without notice. Information on Panasonic solutions for business can be obtained by calling 877-803-8492 or at www.panasonic.com.