Panasonic teases but does not release a new cinema camera

Panasonic announced a new camera to the VariCam line-up. Will it be at NAB 2017? Nope, you will have to wait until Cinegear Expo in June to get your grubby hands on this one. What I, and likely you, can tell from the single silhouette image above is this new cinema camera will be smaller than the VariCam 35 and VariCam LT. I may even bet money this new camera is a similar weight and size to Sony FS5. For now, all we know is Panasonic has a new camera coming soon. Everything else about this new camera is a guess.

Panasonic announced its plans to add 2K RAW output up to 240fps in a free firmware update to the VariCam LT 4K cinema camcorder. The 2K RAW signal will be supported by Convergent Design, which today announced that its Odyssey7Q+ recorder will capture all of the RAW signals available from the VariCam LT, including 2K up to 240fps. Both companies plan to release free firmware updates in June 2017.

The 2K RAW frame is windowed from the center of the camera’s 4K sensor, so no artifacts are introduced into the image. In 2K RAW the VariCam LT will continue to provide its 14+ stop, dual 800/5000 ISO functionality with accurate colors and skin tones. 2K RAW output is available while recording internally in 2K or HD. Last Fall, the VariCam LT added 4K RAW output up to 60fps in a free firmware update. 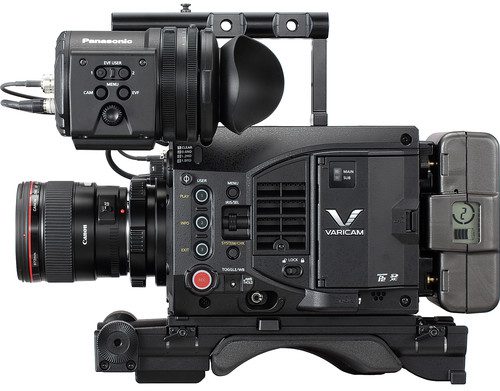 Panasonic has announced the development of the 360-degree Live Camera System AW-360C10 and AW-360B10 (Camera Head / Base Unit), capable of producing 360-degree video in uncompressed 4K/30p. This system generates industry-standard 2:1 equirectangular format 360-degree video by stitching the output of four cameras, giving the viewer the sense of immersion in a variety of scenes, such as live broadcasts of sports, concerts and other stadium events. 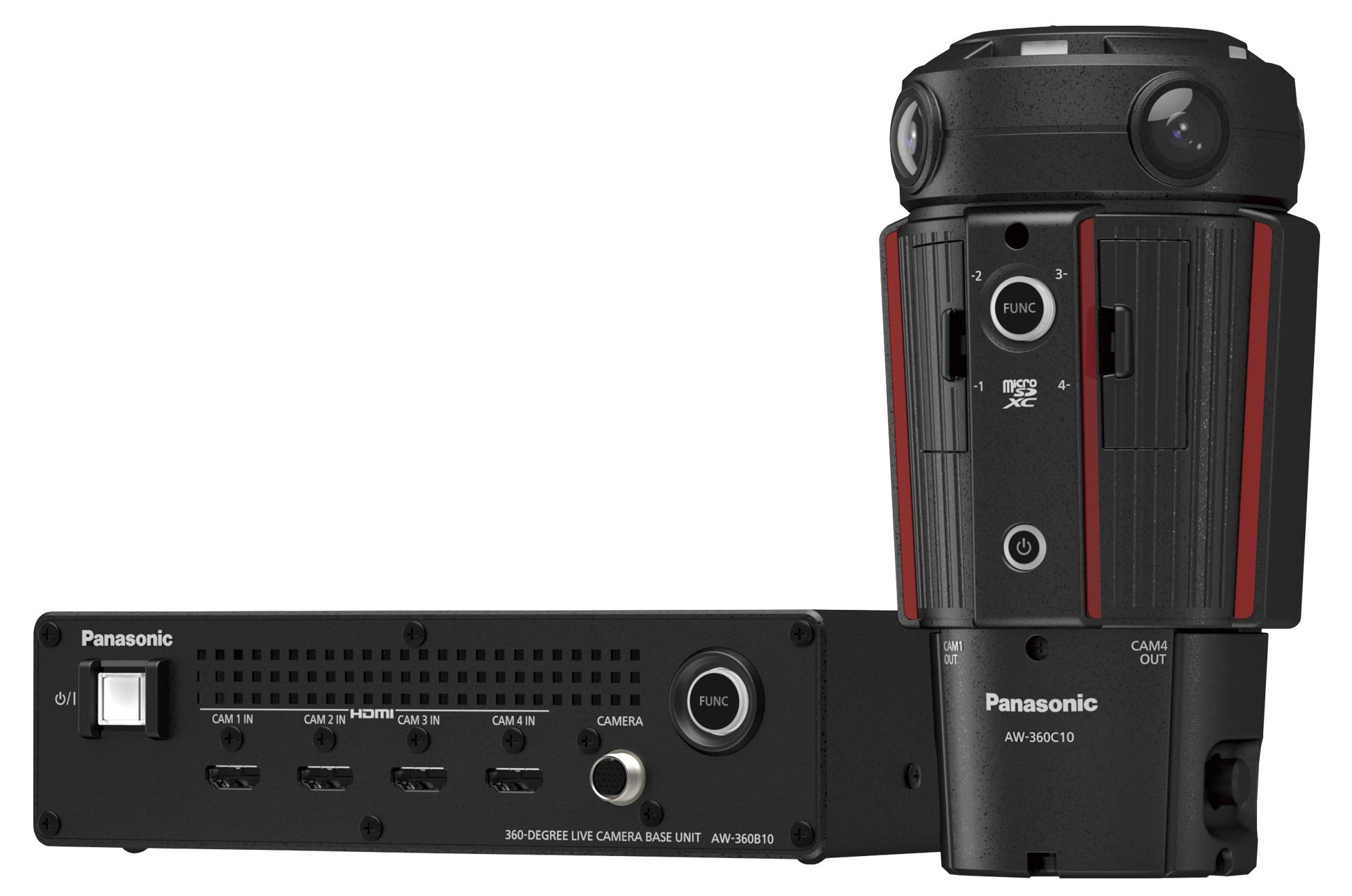 The 4K (3840×1920) high image quality provides the immersive experience as if you were there. There is also a high level of operability, with natural images matched to the environment being generated by automatically controlling the exposure and white balance of the output of four cameras without a PC. In addition, seamless video can be generated because the high-precision “Real-time active stitching function” continuously changes the stitching position by automatically detecting a subject at the seam.

(With 360-degree cameras, images at the seams tend to be distorted when stitched as-is, but the AW-360 solves this problem with its high-precision real-time active stitching.)

Real-time video transmission is possible because 4K/30p high-resolution video is generated with low latency. Easy installation/uninstallation at a shooting site makes operation even more flexible. Not only is this system capable of monitoring and changing configuration remotely via a network with a PC or tablet such as an iPad, but it also allows for control from iPad in a Wi-Fi environment. Furthermore, the 360-degree Live Camera is designed for professional use, offering high reliability with the features that address operators’ most specific needs, such as prevention of unexpected cable removal. The AW-360C10 Live Camera Head and AW-360B10 Live Camera Base Unit will be available in August 2017, with pricing to be announced. 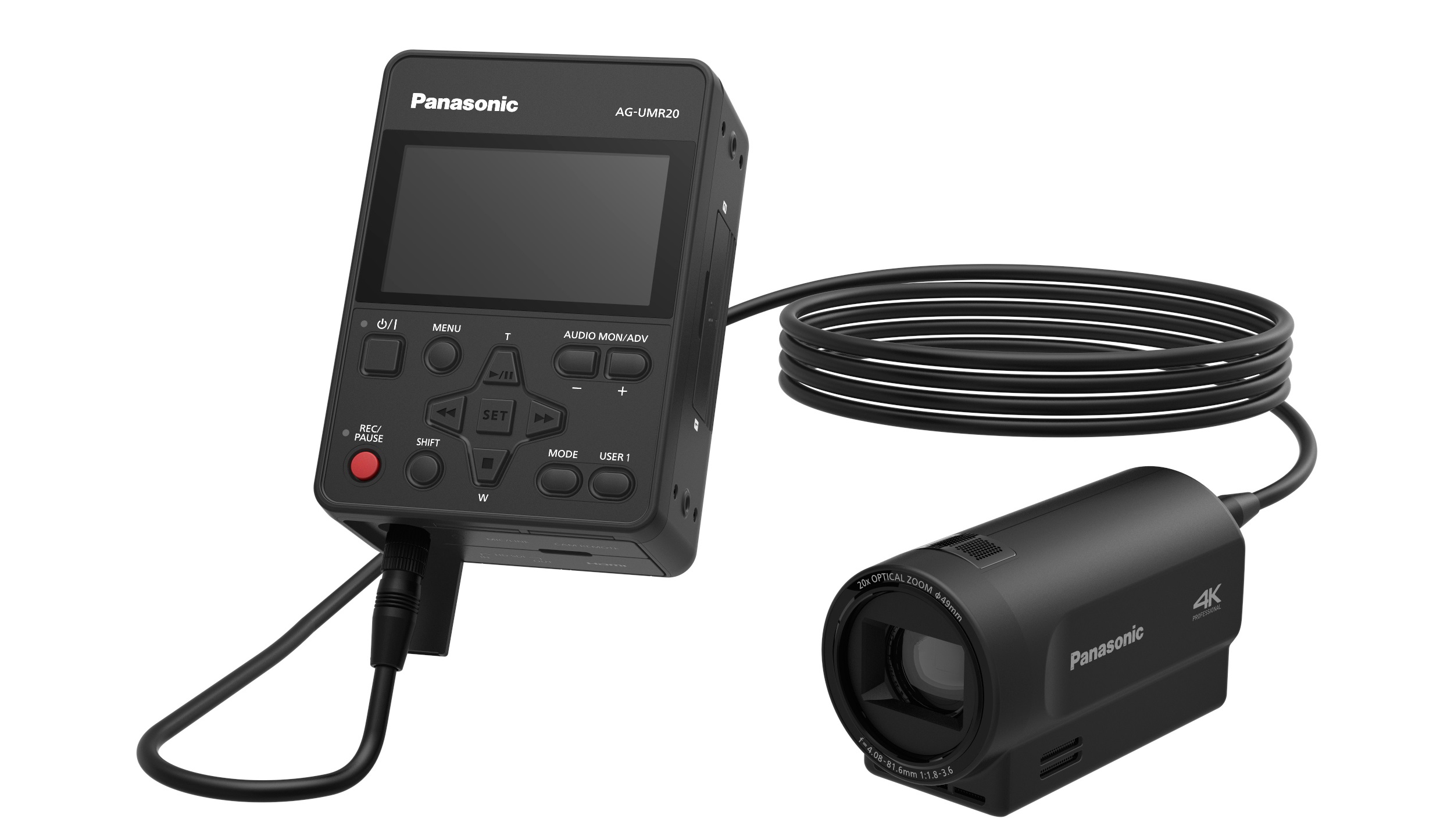 Equipped with a 3G-SDI input and output, the UMR20 AVCCAM recorder is also suitable for back-up FHD recording from any 3G-SDI-enabled camera or for use in studio or event production. The 1.2-pound unit features a lightweight, ergonomic design suited for handheld use (3.78” W x 2.07” H x 5.24” D) and has four 3mm threaded holes for flexible mounting. The UMR20 records stunning FHD (1920 x 1080) 59.94p/50p and high-resolution 4K (3840 x 2160) 29.97p/25p* images when used in conjunction with the AG-UCK20. The recorder is equipped with Double SD memory card slots, enabling Relay Recording with two memory cards (SDXC memory card supported).

The UMR20’s IP streaming/IP control facilitates video/audio streaming and distribution to PCs, tablets and IP decoders. Rec Start/Stop control from an IP controller is supported, and recorded image files can be transferred to an FTP server. The UMR20’s core engine for IP control and streaming is similar to that of Panasonic current AW professional integrated PTZ line-up and will fall right into the same overall system. The UMR20 also features an IP web user interface allowing for remote monitoring, control and configuration.

The UMR20 boasts improved recorder operation with a touch-panel monitor and large buttons. A 3.5-inch color LCD monitor displays content in thumbnail images for quick viewing that can be reversely displayed. Additional features include waveform monitor and vectorscope display (LCD only), photo file conversion (capable of 4K resolution photo extraction), time stamp, and continuous repeat playback of one or multiple clips (suitable for use in presentations). It operates on battery or DC12V power (AC power supply included).