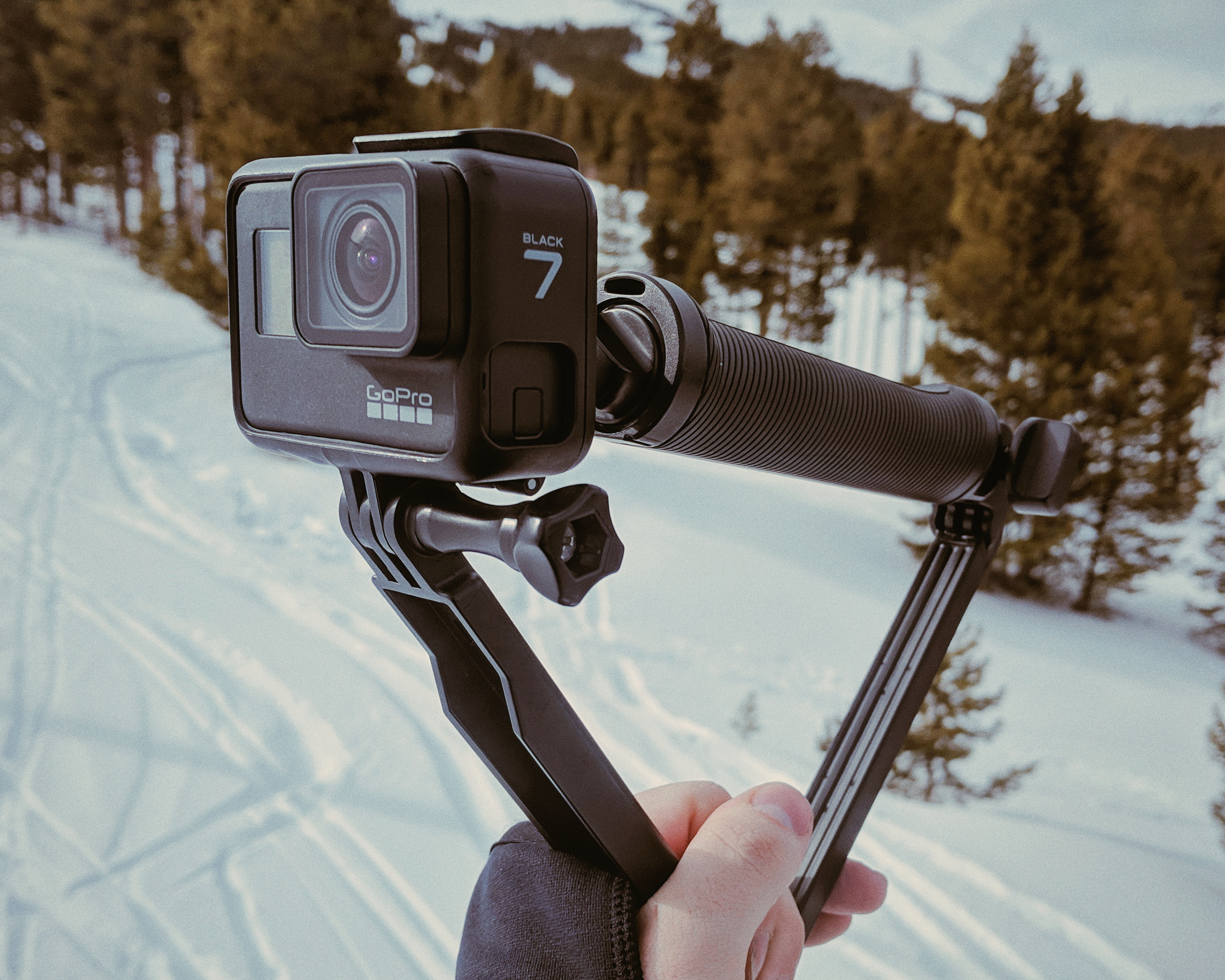 Recently, I was sent a GoPro HERO7 Black to take out with me on a two-week trip to Colorado where I was filming for a ski tour company called Lifestylez/Echo Tours. I’ve done this trip a number of times and it always requires an action cam as I can’t bring my big C100 rig certain places (on the mountain, for one). Having my only B-Camera in the HERO7, here’s what I found out.

Right off the bat, I have to say that my current action cam is a Sony X3000, which I chose for its Optical Image Stabilization, Low Light sensitivity, and (to my eye at the time) a better image than the Hero5. It also has a ¼”x20 hole on the bottom which I liked as there’s plenty of rigging and accessories for that. In any case, the last GoPro I had was the 4, so this was a big step up and my expectations were high.

On the surface, the HERO7 Black is just a HERO6 Black with (good) stabilization, a new (better) menu system, and some new frame rate options. Actually, that’s also true under the hood, with the addition of better audio than previous models as well. In any case, I wanted to test the camera out in various shooting conditions, which included Snowboarding, Concert B-Roll, and “About the Town”, all for use in the various edits that would come of the trip.

First up to test was the Hypersmooth, obviously. They were claiming OIS quality, which gave my eyebrow a hefty raise. After that, I wanted to see which formats looked best, how the battery would do in different environments, and how well it held up in the dark.

Well, hypersmooth is the truth. They’re not joking when they say it’s gimbal-like. Gimbal-esque may be a better description. If you hit a bump the camera’s going to shake, but for being handheld you could sure fool some folks. At no point did I miss the Optical Image Stabilization from my Sony, which was huge because otherwise I was going to have a hard time using any of the footage in my edits. Even when Hypersmooth gives up on the image and lets you jerk it whatever direction you’re (probably) falling, it’s in no way “electronic” looking like other EIS options. It just looks like you moved the camera aggressively. In actuality, slow pans are where Hypersmooth kind of fails you: it can hold on to the scene too long and result in a noticeable jerk in the middle of the pan where it realizes we’re moving. So it goes.

A trick I learned to get some energetic footage at concerts was to toss the camera to the front row and let them film themselves. They ask me to “take a picture of them” all the time anyway. In those situations, you absolutely need some form of robust stabilization or you’re not getting anything but blur. The HERO7 handled it quite well, with no help from the folks excited to hold it for a bit. Overall, something like the Karma Grip (which also powers the camera) is still worth looking into if you need rock-steady footage, but I was honestly surprised at how good Hypersmooth is. Real value-added there.

In regards to that footage, you can squeeze quite a bit on the SD card which I appreciated. On a modest 32GB card you can get a full hour of 4K 60fps. Not bad, considering I’d only be filming for a couple hours at a time and definitely wouldn’t be running it for the length of any given event.

The battery is another thing. GoPro doesn’t have a history of great battery life in their cameras, and it’s not amazing here, but I will say with judicious use you can get away with only one battery per “event” if needed. As I only had one, it was. For the concerts, using it for b-roll, I found the battery held up fine, just about dying by the end of the two-hours I spent shooting. We were inside, it was warm, and while I wasn’t running it constantly I would leave it on a lot. If I was to film the entire thing in one shot I’d likely plug an external battery in like you’d use for a cell phone. I would like some way to register the cable securely into the USB-C port, so it doesn’t accidentally get jostled out, but I suppose that’s a job for the 3D printer.

Out in the extreme cold, it’s just not happening. At a certain point, the camera will just refuse to turn on at all. On warm bluebird days, turning it on and off constantly, we were getting about 15 minutes of footage (not runtime, footage), but on the blizzard days we couldn’t get the thing to run for longer than 15 seconds before shutting down, and then refusing to wake up until it was warmer. Not necessarily surprising, seeing as we just had it in the basic skeleton case and not in a plastic “supersuit” case or something like that, but that’s how it shook out. To be fair, blizzard footage isn’t that great to begin with.

Now the big question is, how does the footage look? Well, if you have a HERO6 Black you know, as the 6 and 7 share the same GP1 sensor, but since I don’t I was quite impressed. I did note that there’s a certain way you have to set up the camera to get the image that I was impressed with, but that’s not hard is it? I’ve listed my recommendations further down. 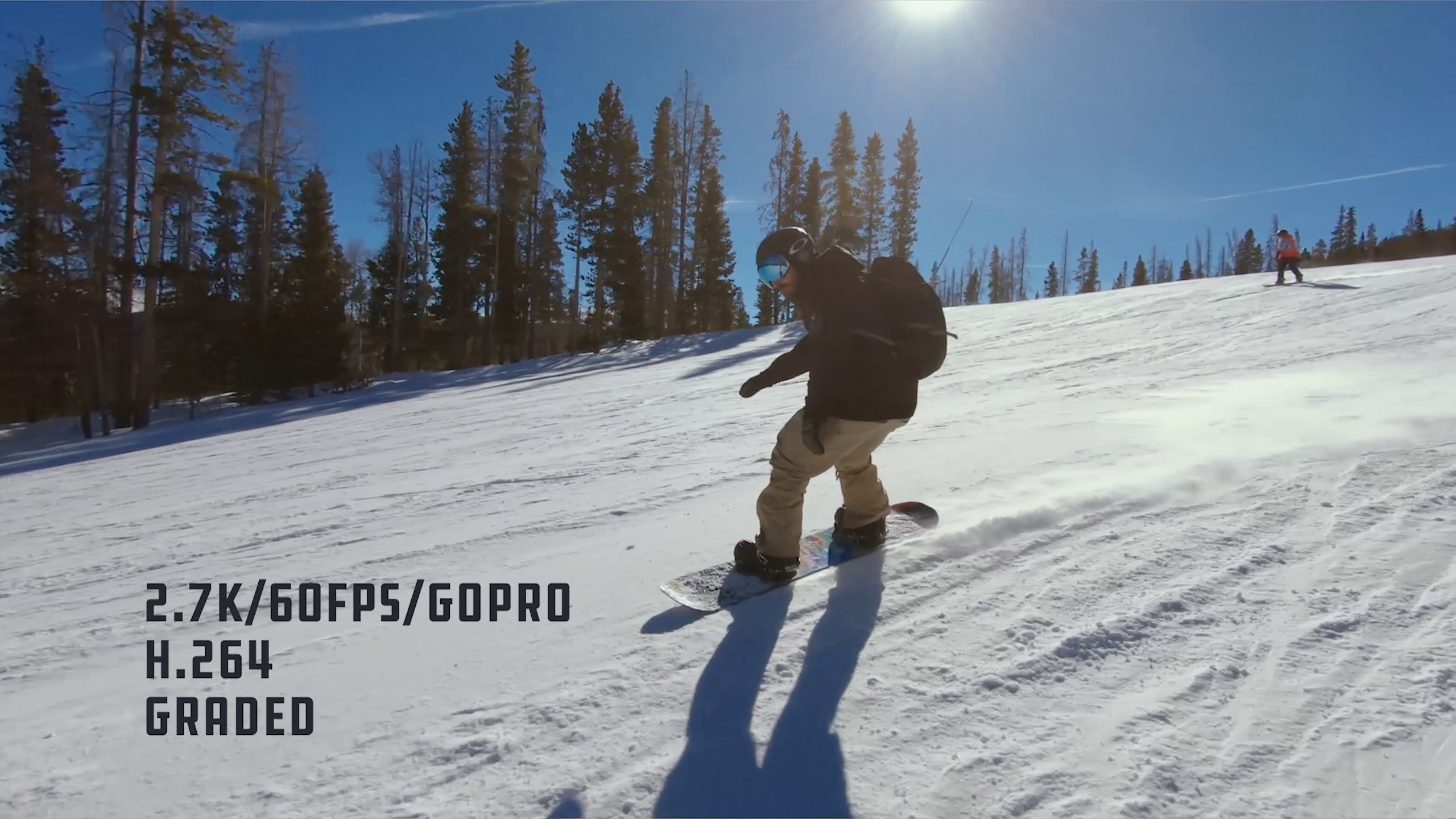 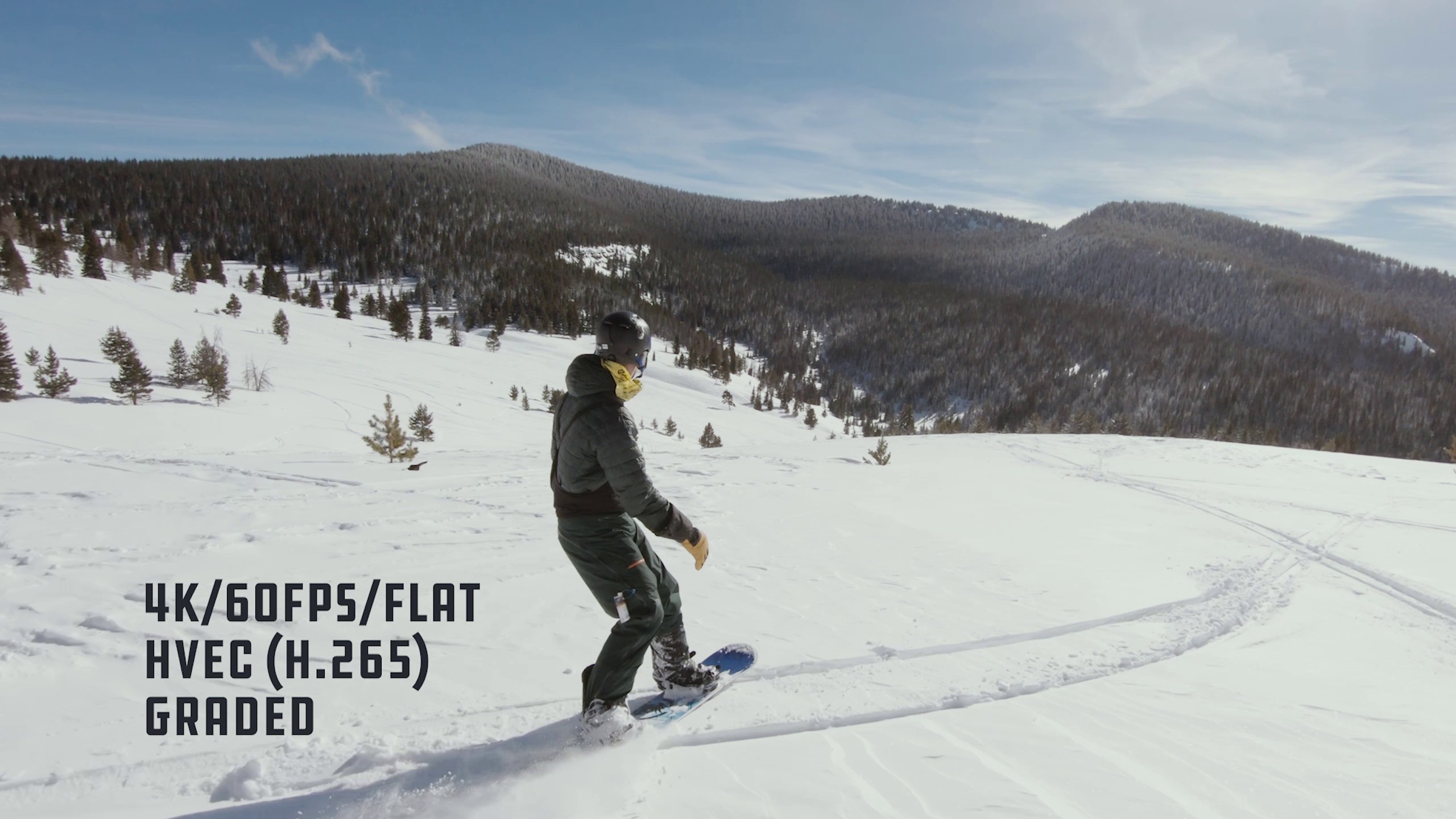 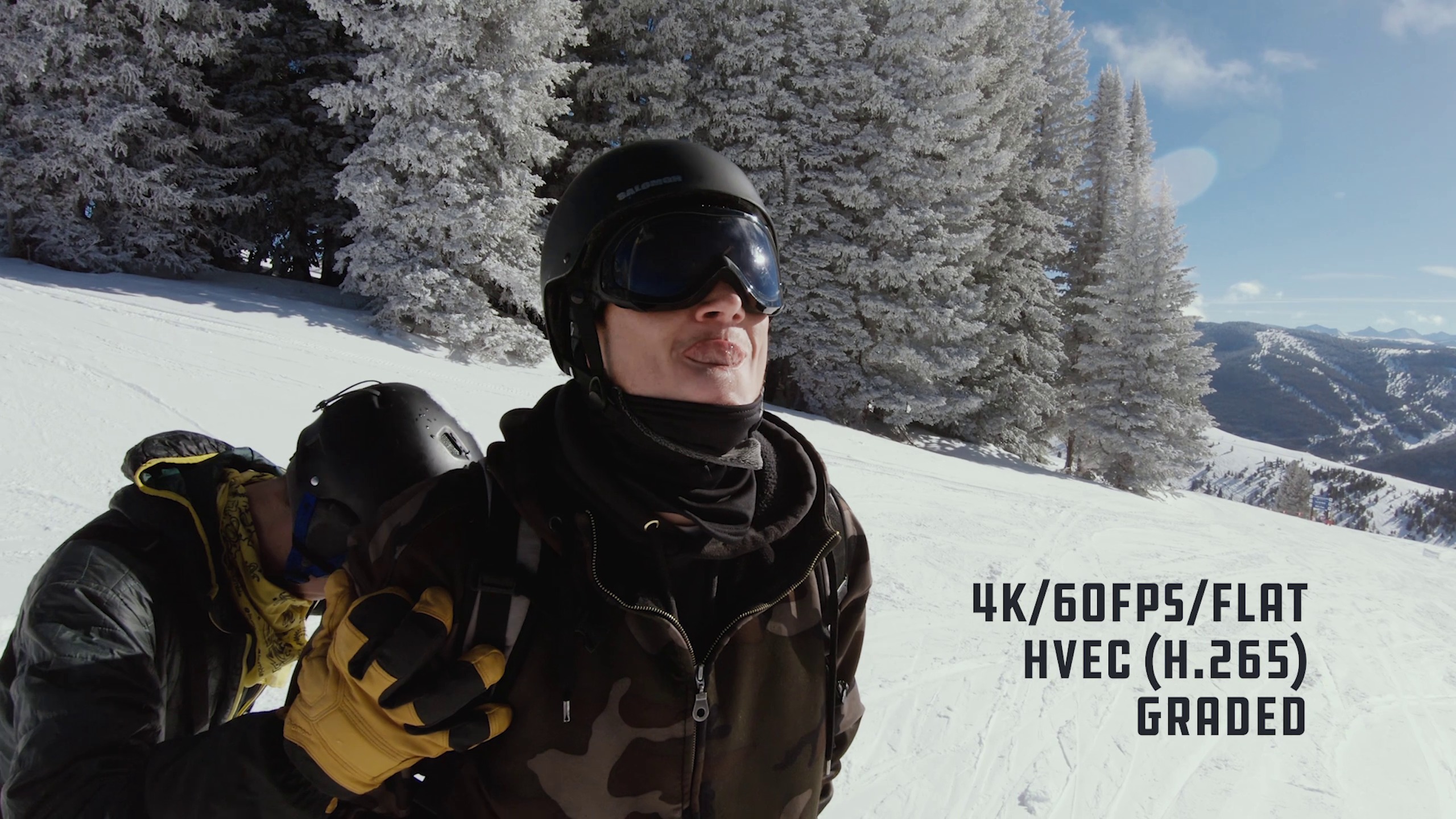 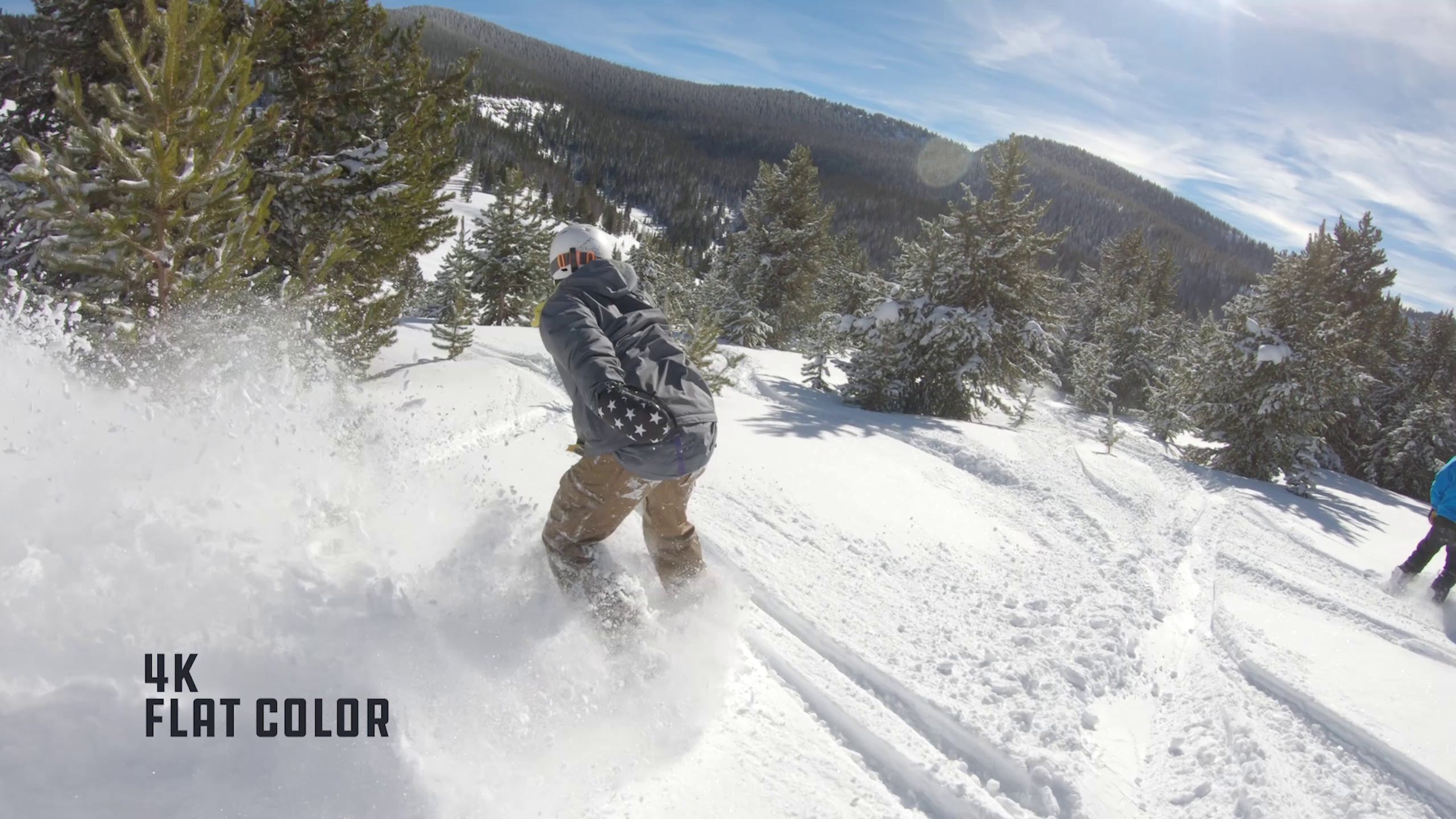 In low-light, like at the concerts or walking around at night, you’re not going to be in much luck. At high ISOs the footage becomes incredibly splotchy and loses a lot of detail, but this isn’t surprising. In the case of the concerts, the extreme shifts in both lighting intensity and color essentially made the footage unusable; at high ISOs the sensor just couldn’t shake it and would blow out very quickly. Low-light performance has become one of the de-facto requirements of professional cameras these days, and while the GoPro could be considered somewhat “prosumer”, it’s still an action cam at heart so we can’t rightfully judge it against higher-tier cameras. 800 is probably the highest you’d want to risk, with 400 being the safety zone and 100 being your “base”.

That being said, when properly exposed the image that you can get from the HERO7 Black is not only very high quality but grades nicely as well. The daylight-lit snowboarding footage I got in 4K cut together flawlessly with the C100 footage (as noted below, 4K/HEVC/Flat Color were the best settings). In other words, if you’re going to be using a GoPro for your production work, make sure the scene is lit. As you should with any shoot.

So, after this and further testing, what settings did I learn were best?

HVEC (h265)
// I had to start with this because it’s kind of important and not necessarily focused on anywhere. With h264 you’ll max out at 60mbps, whereas with HVEC you can get all the way up to 78 in certain scenarios, and as HVEC is a more robust compression algorithm, each mb/s goes a lot further than with h264. Visually there is a difference as well: h264 looks more contrasty/saturated than HVEC, and in most cases less contrast is preferable. As HVEC is a newer format, certain computers might have a hard time playing it back, or may be unable to play it back natively at all. In other words, if you shoot high speed or 4K 60fps you’re using HVEC regardless, but if you’ve got an older computer or it’s under-powered, stick to h264. Here’s a chart of some likely resolutions/framerates you may use, with their bitrates listed with ProTune on and off, as well as in h264 or HVEC (h265).


(*) No Stabilization
(**) Bitrate with ProTune Off/On in mbps

ProTune On
// Yes. Always. ProTune will make sure your footage is recorded at correct settings with the highest bitrate available for your format. In some cases that’s the difference between 45mbps and 60mbps! As far as sensitivity, I’d say go with ISO 100 being the Minimum and Maximum, with 400 being your max in darker situations. You can reach past 1600 into 3200 but it’s going to look very, very blotchy even at 24fps 1/48. I’d also potentially advocate for a -0.5 EV Comp to protect the highlights as they blow quickly. If you’re in dynamic lighting situations, go ahead and lock the shutter speed so the GoPro isn’t constantly trying to equalize. Move the sharpness to low and do that yourself in post. Also, be sure to set your White Balance to the appropriate setting for the scene every time! If you’re not sure, or it’s going to change a lot, set it to 4000K or 4500K. Flat color is recommended.

4K/60/16:9
// Aside from being the highest resolution, it’s also encoded at the highest bitrate when ProTune is turned on. You’ll get the best bitrate at 16:9 60fps or 4:3 30/24fps, but if you go with h264 or any other frame rate you’re getting 60mbps anyway. In that case, go ahead and shoot whatever framerate you’d like, but again I’d recommend shooting flat and forcing HVEC recording if your computer can jive with it, as it’ll give you the nicest and most gradable image. You’ll have to shoot Wide FOV at 4K, but you can correct this in post easily (about 0.408 in DaVinci’s Distortion Correction OFX, and around -23 in Premiere’s Lens Distortion effect, as an aside). If you need Linear FOV, head to 2.7K.

Another recommendation would be to get some ND filters. You can either get a cage with a threaded filter front (like a 52mm or so usually), or you can simply remove the replaceable front-glass and put on a purpose-built ND filter in its place instead, keeping everything nice and small. As we can’t control the f-stop of the camera, the ND filters allow us to keep the shutter speed low. Essentially, this results in a more “cinematic” quality of motion, as opposed to a choppier “action” type of look.

From there you should be good to go and your footage will be looking its best, especially after a nice color grade. You can see example footage from the various scenarios mentioned in this article in the video embedded below.

Overall, I’d say GoPro has finally made the camera it knew it could make with the HERO7 Black. As I mentioned, the low-light and battery life could use some work, but it’s finally a camera I don’t really have any complaints about, and they’ve even added some unexpected features that I like (such as the removable glass and power by an external source). I obviously haven’t used every action camera out there, but right now I feel like you’d be hard pressed to find a better one than the HERO7 Black.