With work-from-home mandates, corporate shutdowns and studio closures, digital media has been one of the hardest hit industries. OpenDrives believes it has a remote workflow solution for everyone. 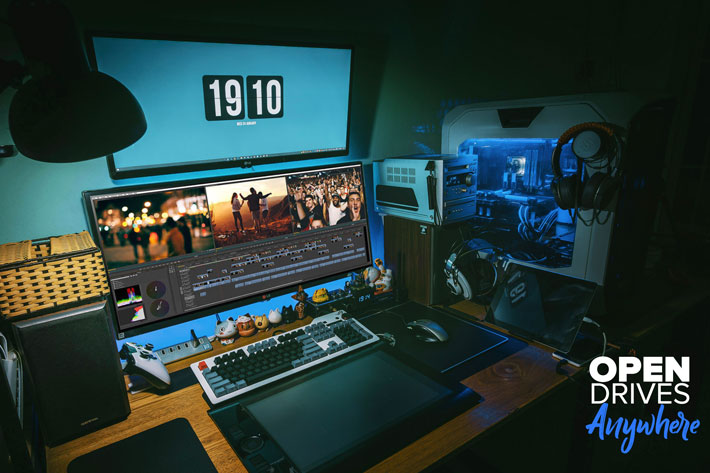 A variety of remote workflows for post-production are widely available, but OpenDrives has what the company says is a new option without any of the compromises of other solutions available.

Working from home with OpenDrives, with the performance you expect and need… right now. That’s the promise made by the company, founded in 2011, known for its network-attached-storage (NAS) solution. Built for experts by industry experts themselves, OpenDrives understands first-hand the impact latency has on post-production performance, especially when balancing workflows with meeting deadlines and budgets. That’s even more important now.

The COVID-19 pandemic lead to a drastic shift towards a remote workforce, as entire companies had to rethink their workflows and daily routines. Meanwhile, the demand for a “new normal” to keep post-production projects in-motion and teams employed, now and into the future, has never been more critical. While the decision to facilitate large-scale remote productivity makes sense, it’s challenging from a technical perspective. For media and entertainment, one of the industries hardest hit by the pandemic, the effort to support remote infrastructures is especially considerable. 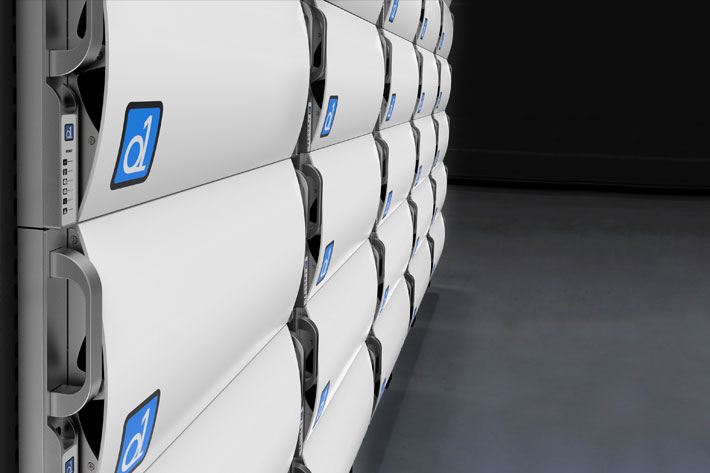 The shift to the “work from home” concept is going to continue beyond this period, and according to a a poll from Zixi, the industry leader for enabling dependable, live broadcast-quality video over any IP, 81% of media executives believe they require permanent remote capabilities. Most businesses have already built out costly physical infrastructures to meet the intense demands of content pipelines, but haven’t worked through the difficult task of implementing and supporting remote workflows.

Post production teams are scrambling for solutions with a limited remote workforce, while challenges to move projects and files forward when having to  maintain social distance is especially considerable. They usually look at two more traditional“remote solutions – the “Take Out” and Cloud” models – which, according to OpenDrives, can be prohibitive in performance, collaboration, cost-efficiency and setup.

Here is a short explanation, by OpenDrives, of both models: 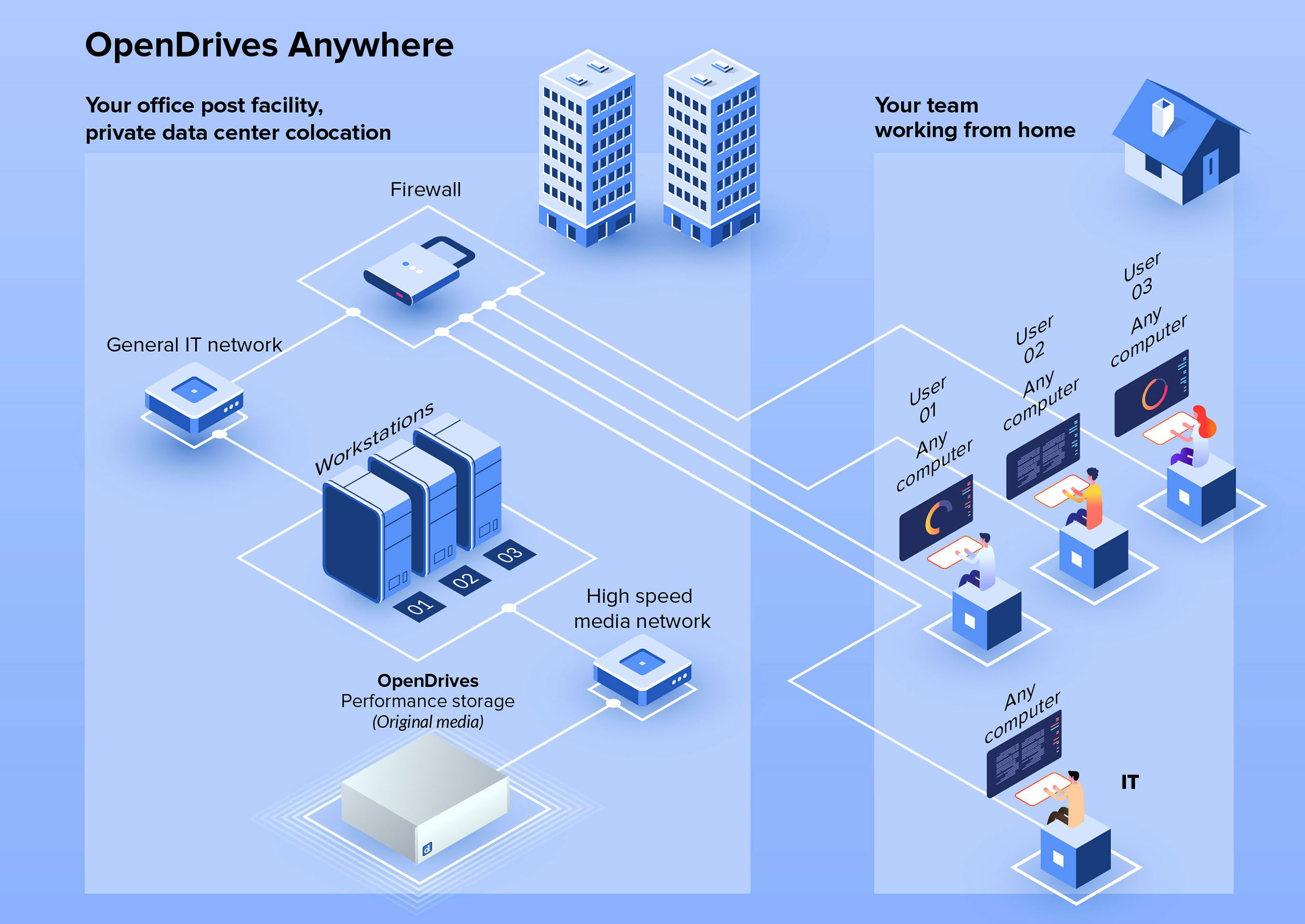 These options come with technical challenges that result in severe performance hits and other logistical and financial compromises, according to OpenDrives. The company has developed a solution, that it calls the third option, “OpenDrives Anywhere”, a model that provides remote workers with the capabilities and performance necessary to carry out workflows efficiently, without any of the compromises. Every OpenDrives shared storage solution can deliver this capability and remote workflow as is for existing customers as their own in-place private cloud.

OpenDrives has an holistic approach to performance. An editor needs to be able to sit down at a workstation, tap the spacebar, have video play instantaneously, scrub flawlessly, and render at top speeds without worrying about all the IT logistics. With existing office infrastructure, teams already have an in-place private cloud and can extend its power to each of your remote professionals. No reinvestment in storage is needed — OpenDrives supports this infrastructure with the performance teams expect and need, right now.  This model enables customers with OpenDrives to work on the same project from multiple locations, without the compromises in performance. 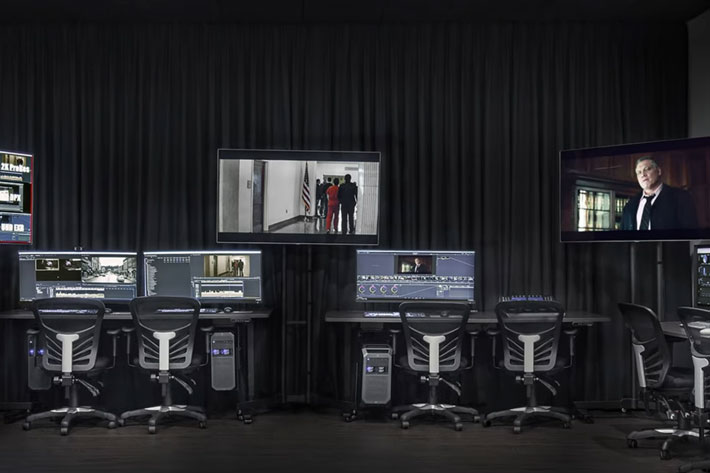 Setup on your VPN in two hours

Nothing changes from a workflow perspective except physical proximity, claims the company, adding that “with simple adjustments, remote control of existing enterprise workstations can be extended via a secure connection.” HP’s ZCentral Remote Boost (formerly RGS) software will facilitate remote access over secure connection to your workstations, or Teradici can provide both dedicated external hardware and software solutions for this purpose, giving you the ability to support your organization’s collaborative workflows at very low cost.

The beauty of the process is that, says the company, “OpenDrives can also get teams quickly set up in under two hours on your corporate VPN and under 24 hours without.” To demonstrate how OpenDrives works the company has built “the fastest media workflow studio” and would like to share it with you. On its website OpenDrives says that “if you’re in Los Angeles, bring your projects and we will show you performance like you’ve never seen”. If you’re not in Los Angeles, the company will demonstrate its “OpenDrives Anywhere” model LIVE and REMOTE, and help you get up and running!

I first learned about the Workflow from Home web series from Frame.io when Ep 5 – Conan O’Brien in... 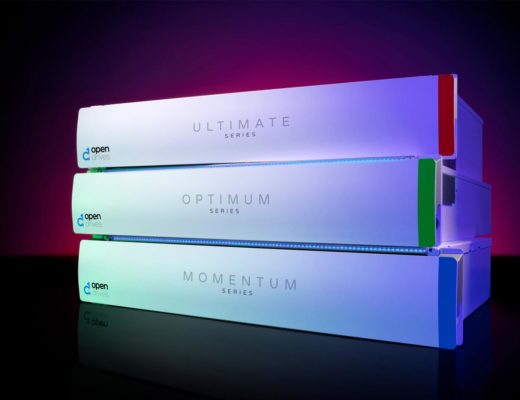 Back in March OpenDrives showed its remote workflow solution for everyone, ideal for the times we’re going through. Now... 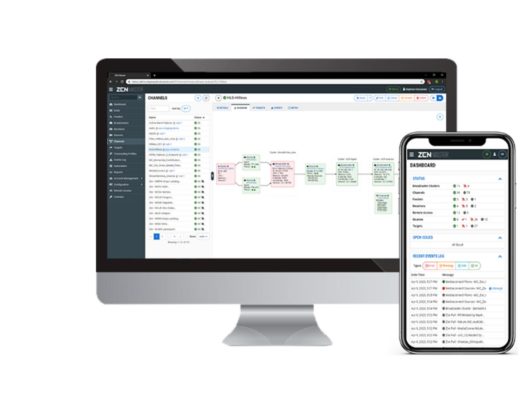 Media and entertainment companies  can securely and reliably distribute video content over IP using Azure, as Zixi  has developed...