Is it even possible to do remote video production in rural locations? Maybe…

It’s been over a year since I started the Starlink “Better than Nothing” Beta and what have I discovered during this first full year working almost exclusively with the service? Well, for starters, it’s no longer “exclusively” as the service has come out of beta and more users have jumped on board – and promises of better technology continue to be delayed. I had to subsidize our service yet again.

When I first received and installed the Starlink beta package, I published an article last year and was excited to finally dump the slower, more expensive limited P2P internet provider we had out here on the farm in a rural area of Nevada County in the Northern California Sierra Foothills. 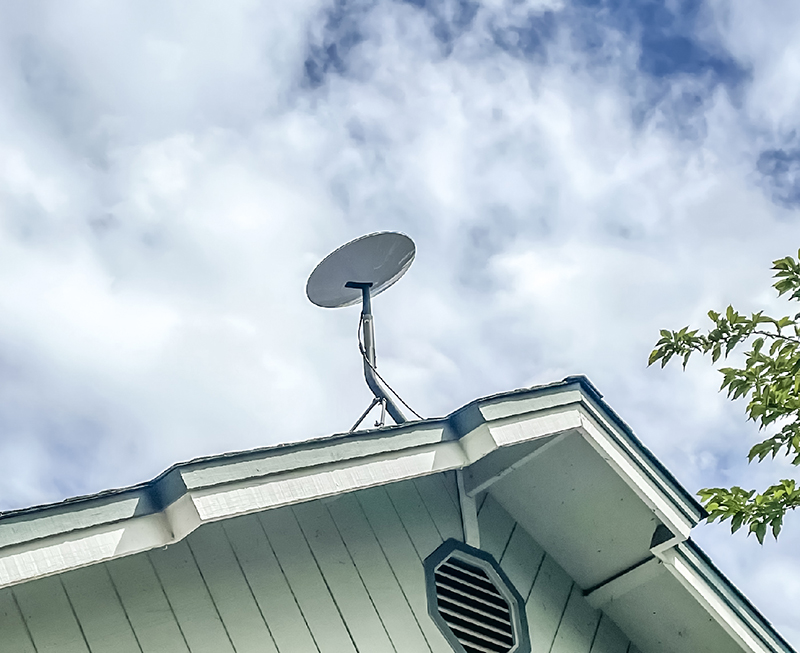 My intention was to release another article exactly one year after install, but in April 2022, it seemed that Starlink was failing miserably and we were experiencing a LOT of outages and networks were down often enough to totally break your connections hard. 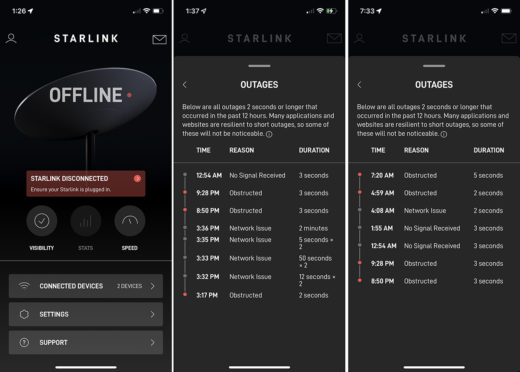 Many times the app would tell you the outage status was a network failure or that satellites weren’t in visible range (obstructed/no signal).

This was causing a lot of issues for both me and my wife, who does online vocal training and music production, with several dropouts each day. I couldn’t copy files to our VPN server without failures and staying on a Zoom call was sketchy at best.

Most of the time, Starlink would do network updates and tests overnight in the off-off-peak hours, but these were occurring often during the middle of the afternoon as well – sometimes for minutes at a time.

Also note that while the app says “obstructed”, there were no natural obstacles encroaching on the dish’s view of the open sky where we had 100% visibility just the year before. No rampant vegetation or tree growth. So why the “new” obstructions? Many folks on Reddit were saying they were experiencing similar issues with their installations as well, and had to try to move their dishy to another location or higher up on a pole.

We had to get a backup of some kind and figured we had to bite the bullet and see if we could start up our old slow P2P wireless service again with the local vendor, Smarter Broadband out of Grass Valley. They aren’t necessarily cheap – nearly double what we’re paying for Starlink and the service is pretty slow, but they’re steady, dependable and their customer service is impeccable.

Ironically, we had already scheduled for a tree climber to come fetch the receiver dish out of the big oak tree at the top of our hill months in advance and he was supposed to come out the following week. We contacted them and got that cancelled and since everything was still hooked up, all I had to do is plug in the cable dongle and connect to a separate WiFi router I had laying around. We were back in business – or at least had a second connection to use if we needed uninterrupted service for meetings, etc.

Meanwhile, Starlink was still sucking hard and I got on as many customer feedback sites to get as much info as I could to find out what was going on. I wasn’t alone in my experience at the time.

Sticking it out – and making it work

One option that seemed like a workable solution was to connect BOTH services to a switch that would automatically connect you with the fastest stable service that was available at any time. After some research I found the TP-link Omada Gigabit Ethernet Router would serve to do the job. It can take two simultaneous inputs and feed those out to a WiFi mesh router that services our whole house.

Since the old P2P system comes into the house from the opposite side, I had to run a 75′ CAT6 cable from that router to the new TP-link switch which is located in my office right next tot he Starlink router. Both services feed into the WAN-WAN/LAN ports and the WiFi mesh router is plugged into the second WAN/LAN port. (also shown in the above image is the CAT5 cable to the Epson Stylus Photo R2000 printer that sets on the desk next to it).

I have the switch currently configured to look at both incoming signals and utilize the fastest stable service. I have most everything set to standard/default just to make it function at the moment, but hope to get some help in really dialing it in someday. (Note that I’m super unskilled at IT/networking and really just fumble my way in the dark until something “works” and then I don’t touch it again!) 😉

For the past 3 months, this new setup seems to work for everything connected to it – including multiple computers, printers and portable devices. VPN can still be inherently sketchy at times, but more everything else just works. Frame.io has been a godsend for all the movie and client projects I’ve been working on the past couple years and is really stable with this new setup.

Here are some speed tests from our various connections, including direct connect to the Starlink router (both WiFi and Ethernet connections), the WiFi mesh router and the Smarter Broadband router (which is typically within 1-2mbps each test). The Starlink router will test differently every time you run it because the connections are jumping from various satellites and ground points.

I also found out that connecting to the Starlink router with an Ethernet cable was negligible in speed as the connectivity from Starlink to the ground points is slower than the device to the WiFi router.

Starlink Updates as of July 2022

So how are things going now with the Starlink service itself?

In a word: Better.

For one thing, the mobility option has been released in the US, so those depending on using the Starlink setup in an RV or boat or take it up to your cabin, is now a feature you can access. There is the newly designed square “dishy” but I’m not sure if it’s an upgrade overall from the round ones we got in beta and I haven’t seen any comparisons or benchmarks to that fact.

Since the issues everyone was having in April/May this year, the service has become a bit more dependable and speeds seem to be going back up every time there’s an update. Recently after an iOS update on my iPhone 12s, several apps needed to be updated and Starlink was one of them. There are a few more advanced features and options than before and it seems more responsive. I’m seeing fewer outages but still having that one pesky area that is showing as an obstruction that wasn’t there last year and it’s really just the same old growth oak tree that has been in the same location and height for well over a decade (the tree itself is easily over 50/60 years old). Plus the Obstruction issue was appearing before it fully leafed-out, so I imagine it’s just fewer active satellites in our range than before.

Working from home in a remote and rural area can have it’s challenges, and much of the US does not have adequate broadband services available. Our county did a survey earlier this year and out of over 4K responses, only a small area closer to town (Grass Valley, CA) have fiber, but everyone else relies on P2P or 4G. Even DSL is being discontinued in many parts where people have relied on it being their only connection to the outside world.

On the map below, we’re on the western-most part of the county where the cursor points to the number 2:

We seriously need better options and I’m hoping that someday, Starlink will play a major part of servicing these folks.

As things progress and I discover any new info regarding the networking solutions and/or changes to the Starlink services, I will add an update to this article below, or link to a whole new article as necessary.

Feel free to add your thoughts to the comments section below!