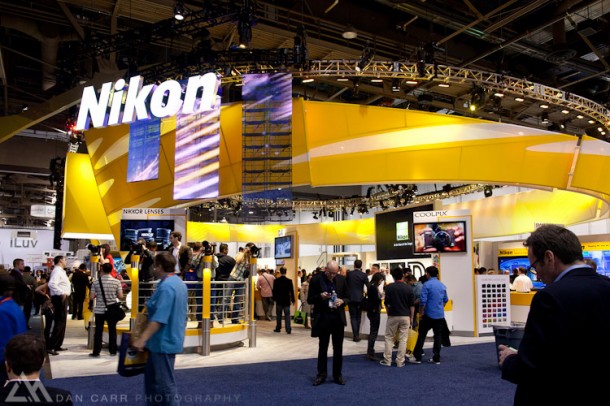 At the beginning of January Nikon launched their new flagship pro camera, the D4. At CES in Las Vegas Nikon had a predictably large presence with the D4 and various other cameras with a strong push towards DSLR video production as well. I was able to get some hands on time with the D4 to check out some of the new features.

Firstly take a look at this quick video run through of the D4 and it's features from Nikon's Lindsay Silverman. 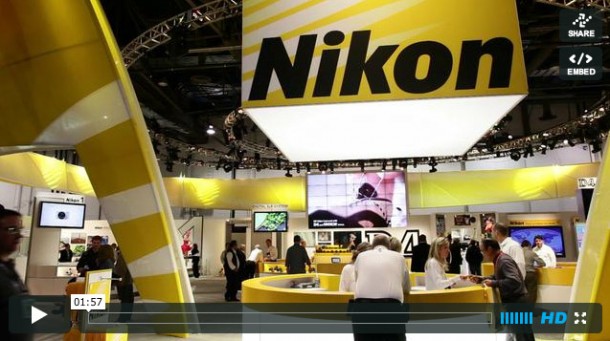 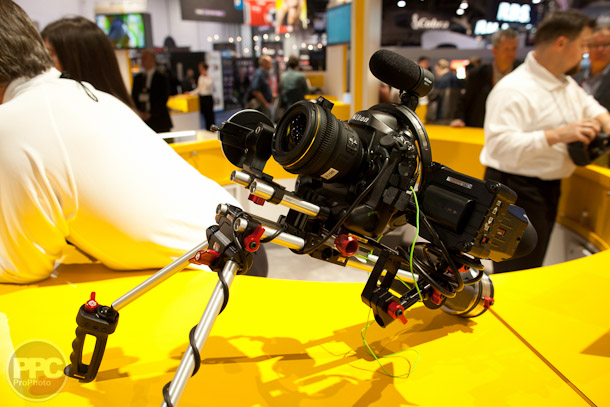 Full D4 shoulder rig with stereo microphone and headphones for monitoring. Nikon had an entire section of their stand dedicated to various video rig setups for their cameras. I've written about the video feature improvements of the Nikon D4 previously and it's clear that in this segment of the market, they mean business, but are they too late ? So many people have switched to Canon lens kits now , it will be interesting to see of the D4 can claw some of them back. I've also hear a fair number of Nikon shooters complaining about the price increase on the D4. Most of seem to think that the extra money has gone into video development, and that's a hard case to fault given the relatively lightweight photo improvements but enormous leaps in video features. The majority of stills shooters don't want to shoot video though and this is something we've seen with Canon and the 1D X to some extent as well. The 1DX is $2000 more expensive than the previous 1D MK4, though at least it also represents an almost total redesign of the photographic side of things as well.

Prior to the launch of the D4, Nikon had one of their best stills photographers shoot an adventure sports film with the camera. If you haven't seen it, it's definitely worth a watch below. 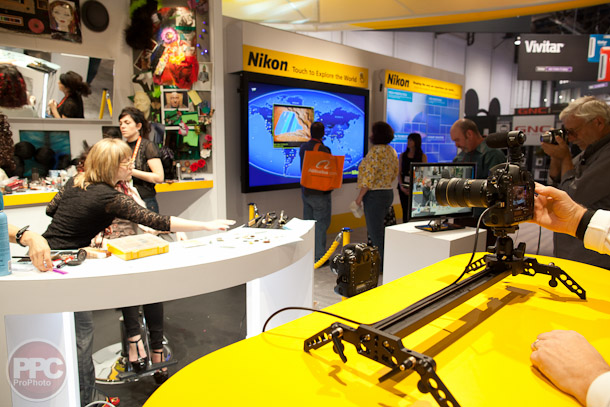 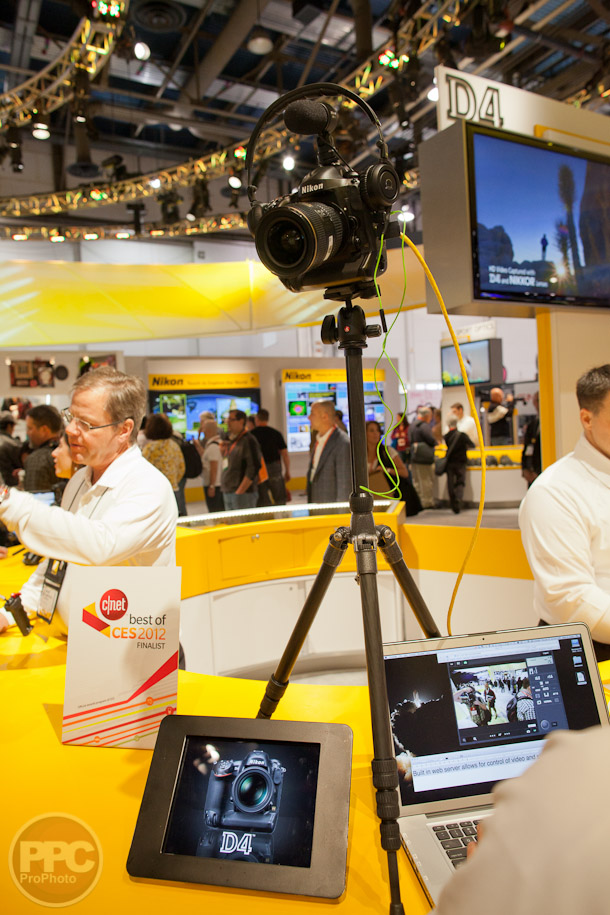 Just like Canon's new 1D X , the D4 features a built in ethernet port for wired emote control. Nikon demonstrated remote focus control and monitoring of the camera's view. I was quite impressed with the refresh rate on the screen, certainly not fast enough to pull focus on a recording video but very good for shooting remote photos.

One thing that I was interested to try was the continuous auto focus in liveview/video mode. It uses contrast detect AF and so far nobody has really managed to implement it in a useful way, the D4 is no exception. Focus was terribly slow, pointless in my opinion. It's the kind of focus you might get away with in a home movie video, but you aren't going to be using this $6000 camera for home movies. For professional purposes it was inaccurate and just far too slow. I also tried the face detect mode, which did indeed lock onto faces pretty well but again I can't see it being useful to a pro.

Having the ability to monitor the cameras audio was my favorite feature though and there are on screen audio level meters. In terms of photographic features there are not many big improvements from the D3s. High ISO performance is reported to be about 2/3 of a stop better than the D3s but I was not allowed to put a CF card in to take any sample photos. As much as you can tell from the on screen previews it did appear to be pretty darned impressive but who knows how much noise reduction is applied to the JPEG screen preview. Ergonomically there are some very small changes but for me the next most interesting feature is the XQD card slot. I can't help feeling that this is a mistake on Nikon's part. As a Canon shooter I have long been frustrated by their implementation of a CF slot and an SD slot. Having to have two types of card is annoying, so I typically leave the SD slot empty. Now the Canon 1D X has 2 CF slots , at last ! And all of a sudden Nikon chooses to go with two formats instead. The XQD card format is a Sony invention and at first it seems impressive, but the problem is that whilst their specs are fast, Lexar just announced a 1000x CF card which is faster than the base XQD specs !! So what is the point of XQD ? Word on the show floor is that Sandisk and Lexar currently have no plans to make XQD cards at all !! Is this another Memorystick ? If I was a Nikon shooter I would be annoyed by this.

The other big player on the Nikon stand was the 1-Series compact cameras. They have been incredibly popular in the consumer marketplace. Nikon displayed several prototype accessories which again showed their intention to have people shoot stills and video with all their cameras moving forwards. External monitors and microphones were just a couple of the future products we will see for the 1-series. They also displayed some upcoming lenses though no focal lengths were given. 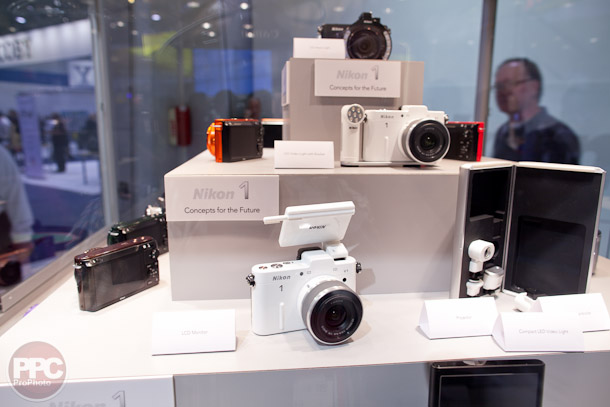 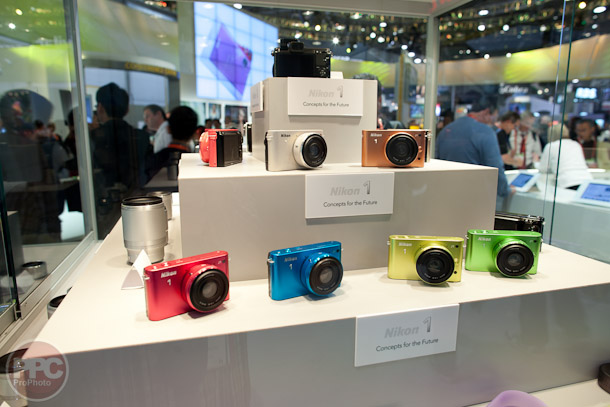 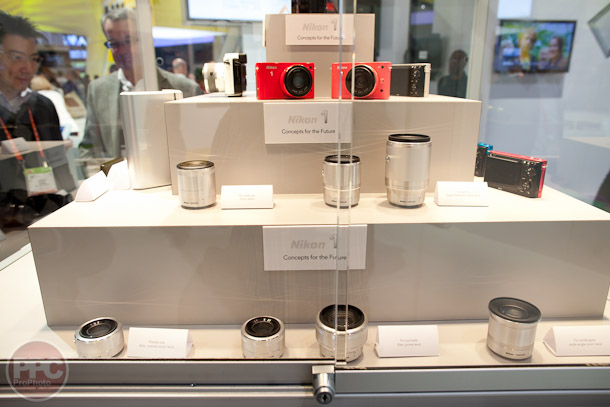