I am happy to report that NewTek today announced the immediate availability of its new TriCaster Mini 4K UHD. It starts at ≈US$8K or ≈US$9K with a pair of HDMI>NDI modules with PoE (Power over Ethernet). Although some will be happy with its 4K UHD capabilities, I am even more grateful for two other details: 1) the return of NewTek’s unique and foolproof waveform monitor (previously omitted) for measuring and matching camera exposures from the ideal central point: the switcher, and 2) the proper display of framerates to at least two decimal points when creating sessions, rather than the previous irresponsible rounding to the closest integer, which caused havoc among novice innocent users in ex-NTSC regions, including most of the Americas and Japan. I am also thankful for balanced audio input and the openness to PAL-derived framerates (25p and 50p) even with units sold in the US, and the compatibility with innovative NewTek’s Live Story Creator, which allows scripts to be composed and sent from Google Docs or Microsoft Word with standardized embedded codes to trigger TriCaster functions after importation. As of publication of this article, NewTek has still not confirmed whether it has revived (or will revive) its functions to allow proper treatment (reverse telecine) of shy 1080p HDMI cameras, which includes ≈29.97PsF (which is disguised as ≈50i and causes an unnecessary and damaging de-interlacing process) as well as 25PsF (which is disguised as 50i and causes the same visual damage). This remains a vital issue for the high amount of shy 1080p cameras still being sold on the market by major manufacturers including Sony. If not revived by NewTek, we must compensate it externally or suffer the visual consequences.

The new TriCaster Mini 4K UHD also includes two channels of Skype for remote guests or co-hosts, which is wonderful. I am surprised that it only includes two, since Ecamm Live (reviewed here, click for a free trial) includes five Skype channels and also uses NDI. 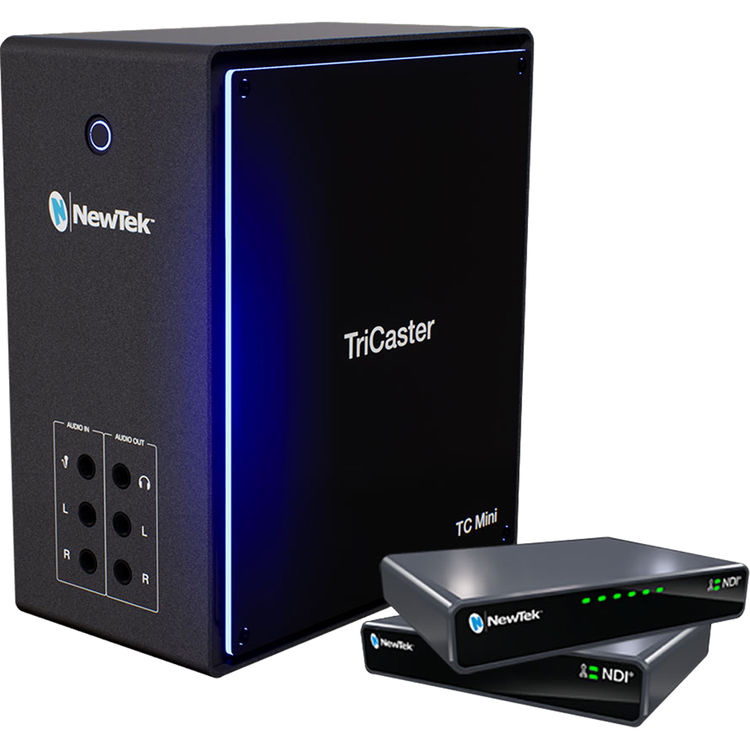 Above, you’ll see the balanced audio input/outputs via 1/4 TRS (Tip-Ring-Sleeve).

The ≈US$9K TriCaster Mini 4K UHD kit with a pair of HDMI>NDI modules with PoE (Power over Ethernet) is already available from B&H.

See my recent article Comparison: NewTek NDI HX Camera app vs NDICam app (both for iOS) to see how a smartphone can be an NDI source for a TriCaster, Ecamm Live or any other NDI-powered video mixer/switcher.

Ahead is the official NewTek press release.

SAN ANTONIO, TX––April 21, 2020—NewTek, the leader in IP-based video technology and part of the Vizrt Group, today announced the latest version of the TriCaster® Mini 4K. Already the most complete, compact live multicamera video production system on the market, the newly enhanced TriCaster Mini 4K adds groundbreaking features like Live Story Creator and LivePanel designed to make the production of network-quality shows even easier for lone producers or small teams whether they are novice beginners or seasoned video professionals.

“NewTek’s mission has always been to make it possible for a single person or a small team to deliver a show that looks like real television. There has never been a time when this has been more relevant,” said Dr. Andrew Cross, president of R&D for the Vizrt Group. “The new TriCaster Mini 4K allows anyone from CEOs to ministers to teachers to create amazing shows and get them online from virtually anywhere.”

Live Story Creator allows an individual to run an entire production from a Microsoft Word document. A script built in Microsoft Word includes triggers actions when loaded into the TriCaster Mini 4K, allowing the storyteller to concentrate solely on delivery of the message rather than on technical setup and production.

LivePanel introduces customizable, browser-based remote control of the TriCaster Mini 4K from anywhere on the same local area network, letting anyone including the presenter control live switching, compositing, mix/effects, media playback, audio, automation and more, from devices including tablets, smartphones and laptops. Configurable macros are now also supported, allowing routine but complex tasks and sequences to be executed at the push of a button.