Adorama's Flashpoint brand introduces a new economy line of portable tripods with heads for photo and video. Ranging from around $100 to $250, these lightweight portables offer flexibility for the hiking photographer or the videographer on the go. Since I've been lugging my 20yr old Bogen steel tripod (boat anchor) around for so long, I was surprised in the results of my testing in how I could see using a few of these in my own workflow in various shooting scenarios; especially the ultra-compact carbon fiber tripod with ballhead. 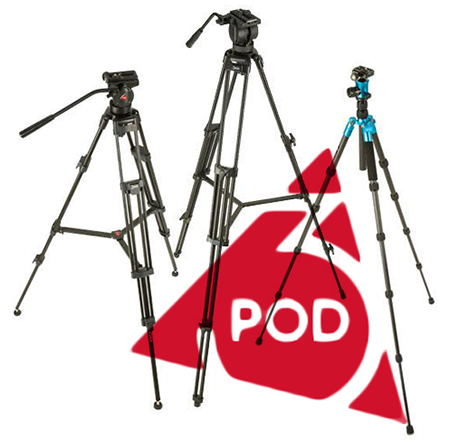 At around $110 – $140, these two affordable and portable video tripods with fluid heads offer some versatility in their function. In my testing as you'll read below, I'll share with you the strong points of each of these two tripods, as well as the limitations. Bear in mind, these are complete tripod kits with a fluid head – ready to go right out of the bag. Granted, you can't expect the same features and performance of a $1500 Sachtler, but for a portable tripod you can carry in on a hike or use for your B-roll cam, these might just fit the bill without breaking the bank!

This is a fairly sturdy center-brace video tripod for the price and has a remarkable 77″ maximum height.

As with all the 3POD tripods I tested, the V2AH has a padded carrying case which protect it while stored or in transit.

This tripod features quick-tensioning knobs on the legs and an ingenious retainer clip on the bottom that keeps the legs snugly together in storage.

For an economy tripod I was impressed that it features dual leveler bubbles for both the base and the fluid head. Also impressive was the textured powder-coated metal finish on the fluid metal panhead parts and control surfaces.

The 2-way fluid metal panhead is attached by a half-bowl adaptor mount that is adjusted by a center handle underneath. This works adequately, but isn't very smooth to operate. I found it much better to setup before attaching the camera to the quick-release plate, as the added weight makes it difficult to adjust.

Since this is a simple design 2-way fluid metal panhead, the dampening is done with the tensioning lock knobs for both pan and tilt. These did feel like they were either just locking or allowing free movement without a lot of fine-adjustment, no matter what level of pressure I applied to either control. Considering the price of this tripod however, I wasn't expecting it to perform like a higher-end unit and was more interested in the solid build/design features it does have; as well as how sturdy it was under load.

The quick-release plate slides in from the back and has a push-button pin release. However, the position/angle of the plate tensioning knob will hit the base of the camera or anything that sits flush against the plate. I would have hoped for a pull-out repositioning knob in this location to avoid this. However if you can manage to slide the plate forward enough to clear the obstruction, you may be able to flip it on over and tightening it after repositioning.

I was however impressed in how stable this tripod is in any height adjustment and whatever DSLR rig I attached to it. I was able to get smooth focus pulls without movement using the Flashpoint DSLR rig with mattebox and follow-focus; even on an uneven earth footing.

With the legs fully-extended to the maximum 77″ height and under a normal DSLR rig load, I managed steady lock-off shots and simple pans, even with a 300mm lens.

I can see this tripod being a great addition for events where you would need to get your camera up above the crowd or over fences, brush and other obstacles with this height advantage. I've not had a portable video tripod at any price that would actually raise the camera over my head and I'm 6'-0″. Using the Flashpoint 7″ LED Monitor with an HDMI cable allows you to easily track your shots at a comfortable level.

I can easily see using the 3POD V2AH Aluminum 3 Section Tripod for a B-roll cam or a lock-off shot at an extended reach. I can't say I'm overly impressed with the performance of the fluid metal panhead operation for pan/tilt as my main tripod in a remote situation. But at the price point of only $139.95, it's sure to provide good solid basic duties for a portable video tripod.

This tripod actually surprised me as to how steady it was for it's compact size and amazed at the smoothness of the fluid panhead operation.

The padded carrying bag is adequate and not really even expected for a video tripod around $100.

Even though the V3AH is smaller and cheaper than the V2AH video tripod, the fluid panhead boasts a payload capacity of up to 15lbs, compared to 14lbs with the V2AH.

The V3AH also features the retainer clip that holds the legs together and adjustable rubber feet. The legs are adjusted with easy to use positive flip locks and the tripod features a center brace support. The tripod can be adjusted for a minimum height of only 28″ for low-angle shots and a maximum reach of 61″.

It has a single bubble level on the panhead base, which is similarly-designed to the V2AH with a half-bowl mount and adjustable tensioning handle underneath.

The smooth matte black anodized finish of the V3AH fluid panhead has most of the same features as the V2AH with 2-way adjustable pan and tilt tensioners, but includes a level spring which helps keep the tilt function smooth. It also includes a passive counterbalance for increased stability. I found the quality of the panhead operation and adjustability of the dampening to be far smoother and better performance with the V3AH over its larger brother.

As with the V2AH, the fluid panhead handle is fully adjustable and can be mounted on either the right or left sides of the panhead.

I was really impressed at the build quality and performance of the V3AH video tripod with Fluid Panhead for both its size and $110 price tag. I could see using this as a portable tripod I could hike into a remote location with and rely on it to perform with my DSLR or prosumer video camcorder. The fluid panhead is smooth and steady and works well for getting panoramic photo sequences as well (see example below of a 180-degree pano composited in Adobe Photoshop CC):

The new 3POD lineup of 7 super-portable photo tripods varies from the ultra-compact PTT1H Table Top Aluminum Tripod with Ball Head ($24.95) to the P4CFH 8X Carbon Fiber 4 Section FlatFold Tripod with K2 Ballhead ($249.95). I didn't test all these out but opted to try just one of the mid-range CF tripods with a ball-head for build quality and design.

I have to say I was most excited to test this ultra-portable backpack-worthy CF tripod with ball head. And I wasn't disappointed at all when it arrived!

Since I shoot a lot of photos on the go, I always travel with my big old heavy Bogen steel tripod in the truck in case I need it and that's great when it's convenient. But the many times I've lugged that thing up and down paths and trails unnecessarily, I really could have used a simple, compact and lightweight tripod such as the P5CRH. With a maximum payload of up to 22lbs, this tripod weighs in at only 2.6lbs and folds up to approximately 12″ for storage.

The build quality and design of this tripod is fantastic and evident the moment you unzip the included padded carrying case. The striking blue anodizing is a great touch and the ballhead is protected by a blue velvet pouch with a drawstring for extra protection in transport.

The legs can flip out to various degrees and lockable independently of each other. The fit and finish of the hardware is impeccable.

In its lowest settings, the wide steady footprint allows for great support for both still and timelapse photography – perfect for nature shooting and staying low.

The carbon fiber legs are adjusted with rubberized twist-tensioners and folded all together with the center tubes extended, the P5CRH converts to a very steady and light monopod.

The ball lock tensioner requires little force to lock/unlock the head and allows for smooth operation without that sudden “drop” that ballheads are often noted for. It also features tension markers if you wish to allow some movement in the head while keeping the camera steady but not totally locked-down.

Despite the P5CRH carbon fiber tripod's light weight and size, it was incredibly stable. I was shooting some tests in approx 10mph winds with a 300mm lens and still maintained very sharp images. An example below with a 1:1 detail below that.

I also tested the P5CRH tripod with the GoPro Hero3+ in a Genus GoPro Cage for capturing timelapse and panos. The tripod seemed to hold steady for the short timelapse tests I gave it.

Overall, I was most impressed by the P5CRH Carbon Fiber Tripod with K3 Ballhead for design, build quality and versatility. I can't believe that it's only about $125 from Adorama!

For more information about the entire new 3POD Tripod line, check out this link on Adorama's website.