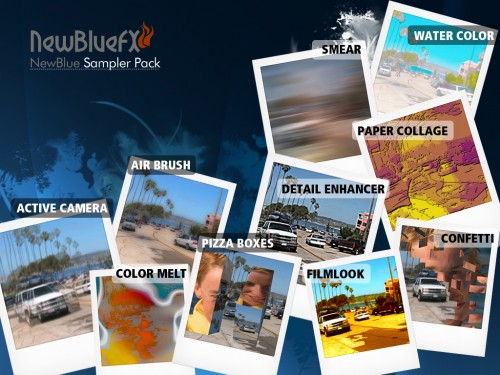 NewBlue, Inc., the fastest-growing developer of integrated effects technology for video, rolled out the NewBlue Sampler Pack today. This collection of video effects and transitions presents video editors with a selection of plugins from its best-selling NewBlueFX collections, competitively-priced at $49.95.

Explains Melissa Jordan Grey, chief strategic officer, “The NewBlue Sampler Pack introduces a great way to experience NewBlueFX and discover what our product line is all about. Best of all, video editing enthusiasts can sample our leading video effects and transitions packages at a fraction of the price.”

Featured in the NewBlue Sampler Pack are:

3D Confetti (Transition) from NewBlue 3D Explosions, which turns the first scene into bits of three-dimensional confetti that blow off the screen to reveal the second scene.

3D Pizza Boxes (Transition) from NewBlue 3D Transformations, which builds a stack of spinning boxes with the sides alternating between the first and second scene. The boxes eventually settle together and combine to create the second scene.

Color Melt (Transition) from NewBlue Art Blends, which morphs between two clips by expanding and softening the colors.

Detail Enhancer (Effect) from NewBlue Video Essentials, which strengthens the lines and edges in the video image, bringing out detail in a dull or foggy scene and resulting in a clearer picture.

Film Look (Effect) from NewBlue Film Effects, which modifies the video’s color characteristics and lighting to reproduce a particular film stock or create a unique mood or look.

Paper Collage (Transition) from NewBlue Paint Blends, which blends between two clips as it builds the video image from layers of colored paper.

Smear (Transition) from NewBlue Motion Blends, which blurs the first clip along a motion axis, then clears the blur to reveal the second clip.

Water Color (Effect) from NewBlue Paint Effects, which repaints the video scene so that it resembles a water color painting.

Users can purchase the NewBlue Sampler Pack directly from the company’s website at www.newbluefx.com/sampler-pack.html. A fully-functional trial version is available for download, as well.