Apple posted a handy white paper on the new ProRes codecs, and there’s some good stuff in there.

I went digging through the ProRes white paper that Apple posted with the release of Final Cut Pro 7, and found some useful info (which I’m betting they won’t mind m highlighting here). Read on.

First, I got it wrong originally about the ProRes4444 codec – alpha channels are supported up to 16 bits instead of the 12 I thought (and may have posted elsewhere). They are losslessly encoded, so they will match EXACTLY from the uncompressed alpha source. Not visually losslessly, mathematically losslessly. No argument – it matches. That ProRes4444 handles up to 12 bits is great – a minor point of quibblage – since it is compressed, it can be difficult to determine whether all 12 bits are accurately recorded/encoded since there is some loss of precision in a lossless codec. In practice, for shot-in-the-real-world material, this won’t matter, since every camera that generates 12 bits has more noise than signal in those last bits. Put another way – there is so much noise in the signal, recording 12 bits of it really doesn’t give you a meaningful benefit. (MANIPULATING those bits in a 12 bit or greater color sandbox, however, IS important!!!!)

Secondly, this useful chart to give you an idea of how many Mb/sec or GB/hour your footage takes up. It was stashed back in the Appendix, but considering I was about to test and generate this info, this just saved me a day: 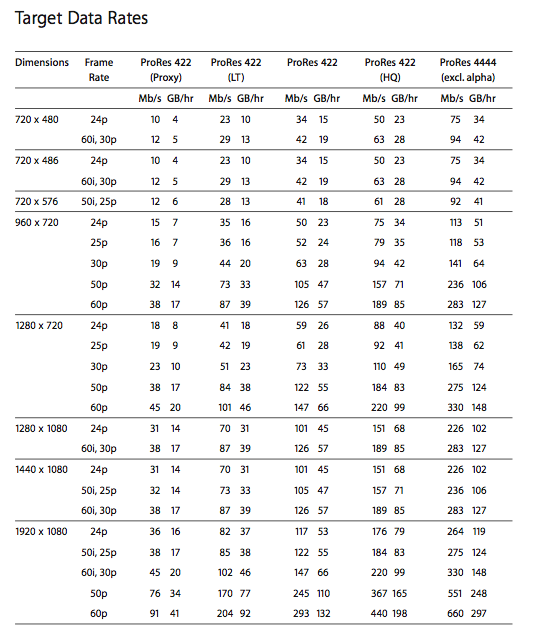 continued on the next page: 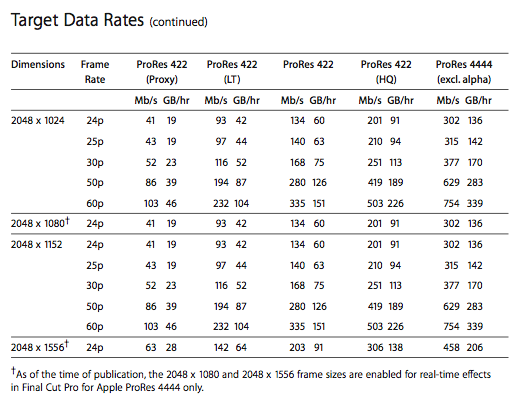 Secondly, how much does it crunch the image down? This chart shows it pretty clearly: 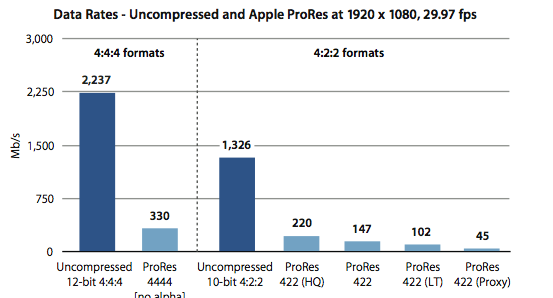 There’s further info about the PSNR of ProRes422HQ (Peak Signal to Noise Ratio, that means how good is the quality/fidelity) compared to D5 and DNxHD, showing (according to Apple) that ProResHQ is better than D5 quality – something our own testing at DFC verified last year.

Anyway, there’s lots of good info in there – go read it if you are a codec geek like me.

I do wish they’d showed a PSNR result of uncompressed vs ProRes4444, and some samples of how much the alpha channel boosts the throughput – which shouldn’t be too terribly much if it is a typical alpha channel. Tests will confirm, though.

Argh – draft got eaten by timeout, now I gotta get back to work. But there’s good stuff in there – go read!