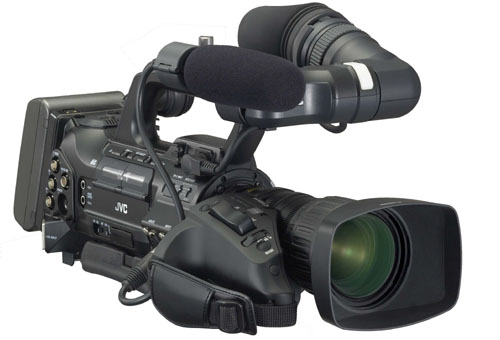 JVC Professional Products, division of JVC U.S.A., has announced a new feature of the GY-HM700 ProHD camcorder that brings further benefits to customers in their choice of workflow. As with the smaller GY-HM100 camcorder, .MP4 files can now be recorded onto the SDHC card along with .MOV files when the SxS adapter is not attached, providing great flexibility for shooting and offering a unique dual media concept. JVC has also added a more powerful built-in DNR to the GY-HM700, which produces higher picture quality.

In combination with the optional SxS adaptor KA-MR100, the GY-HM700 provides the unique properties of dual media recording capability and a choice of industry-leading file formats on both inexpensive and high performance media. With the KA-MR100 media recorder docked, it is possible to record Sony XDCAM EX compatible .MP4 files onto high-speed SxS memory cards, while simultaneously recording the same .MP4 files to inexpensive SDHC cards. Having two copies instantaneously available provides more versatility in the field, with the assurance of always having a backup.

“This is an important improvement because it provides additional platform flexibility,” said Craig Yanagi, national marketing manager. “The option to record .MP4 files on SDHC cards expands the economic efficiencies of the camcorder. Plus, the option to record a full-resolution backup copy simultaneously is a great benefit.”

The .MP4 file format recorded on SDHC can be natively edited by NLE systems that support XDCAM EX. In addition, .MP4 files recorded onto SxS media are compatible with the Sony XDCAM EX format. Recording in the editing system’s native format eliminates the time consuming transfer step and dramatically speeds up the post-production workflow, a major advancement for JVC and the industry.

The new recording option and improved DNR will be standard features on all GY-HM700 camcorders moving forward, and is available as a free download for existing customers at http://pro.jvc.com.

ABOUT JVC U.S.A.
Headquartered in Wayne, New Jersey, JVC U.S.A. is a division of JVC Americas Corp., a wholly-owned subsidiary of Victor Company of Japan Ltd. JVC distributes a complete line of video and audio equipment for the consumer and professional markets. For further product information, visit JVC’s Web site at http://pro.jvc.com or call (800)526-5308.