Difficult times ahead for Olympus, as its new BIG professional MFT camera is compared with the new Panasonic Lumix DC-S1, a full frame mirrorless that is smaller and costs less. 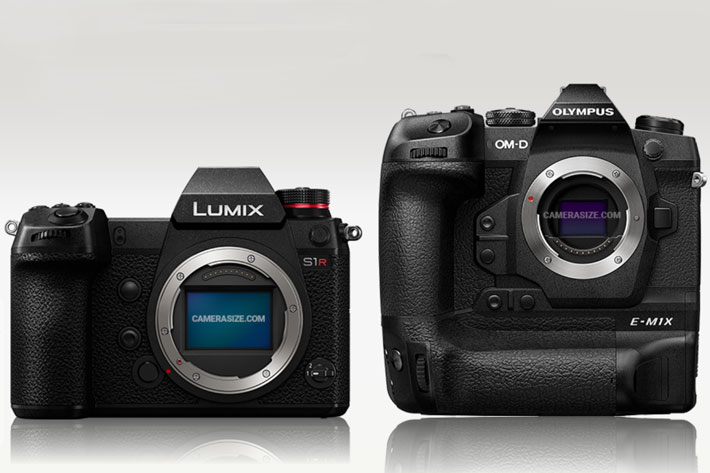 Panasonic may not have left Micro Four Thirds behind, what makes sense as the company has invested a lot in the G series, but its most recent cameras are, no doubt, a blow for MFT, and for Olympus, that just released its model for professionals (according to the company), a gigantic MFT camera, even when compared with the now revealed Lumix DC -S1 full frame model. The problem is not only size, though, as price is also important. The announced prices make things difficult for the MFT model: the Olympus OM-D E-M1X costs $2999 (body only) while the Panasonic Lumix DC-S1 (body only) costs $2497.

Before you tell me that the difference in format will, in the end, favor Olympus, because of the size of the lenses it will use, let me say that I am aware of the fact, having, before, written about the subject (and having two MFT cameras at home, from Olympus and Panasonic). But it was not me who said that the Micro Four Thirds system “focuses on reducing overall system thickness and size by aiming for a highly portable compact system.” Apparently, the mantra is not followed in the new camera, which is BIG. To show how big it is, I used images from the website CameraSize to compare the M1X with the S1R (which has the same body size has the S1, but has even more pixels, with a 47.3MP sensor). 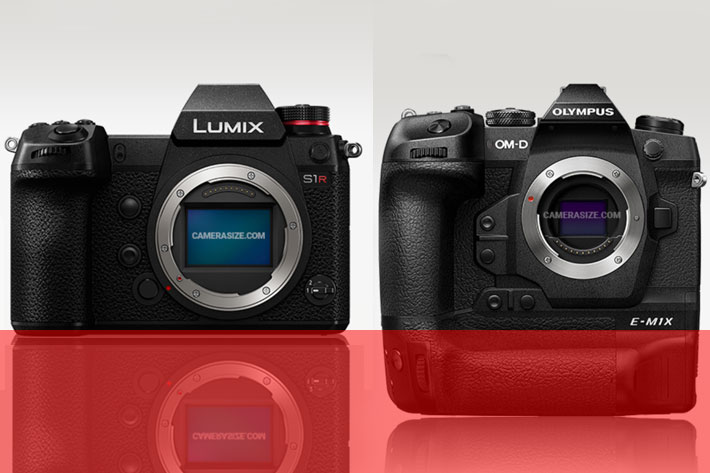 Some will say that if the grip was removable (which it is not, as it serves a purpose, and also extends the battery capacity) we would end with a MFT camera that is not much different from any other Olympus, but a “doctored” image I created keeping the proportions of the two cameras compared reveals that, even without the grip, the Olympus M1X is similar, in size, to the Lumix S1. In case you forgot by now, one is a Micro Four Thirds and the other a full frame sensor… One, the Lumix, is also $500 cheaper!

I recently wrote here, based on what was known of the Olympus M1X, that the company had, probably, better not make fun of DSLRs in their promotion of MFT, as the size of the new camera puts it at odds with what is preached. Not only that, the camera weighs 997g, against 1017g of the Panasonic Lumix DC-S1. Not much of a difference, but then, again, it’s a full frame camera against a MFT camera. Was MFT not going to be smaller, always? 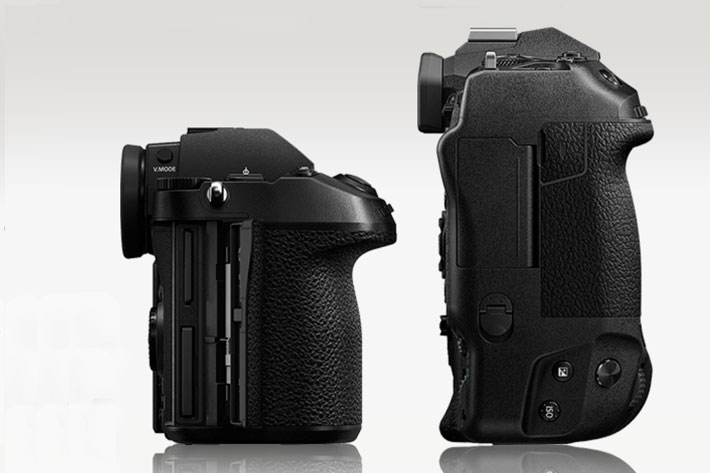 In recent interviews published online Olympus has said that it has no intention to move to full frame, as the company has its heart (and technology!) in MFT, and believes the small size (sic) is their asset in the long battle. The company also mentioned that a move to medium format was studied but abandoned. The note led to some comments that suggested one thing: despite not moving the sensor size to medium format, Olympus went ahead and used a body they had designed for the it…  the M1X!

With the M1X having a lot of people scratching their head, trying to find out who are the professionals who will buy the new camera, beyond those who already use Olympus, and Panasonic, Olympus partner in MFT, introducing a camera that, price wise – and in other aspects – competes with the M1X, the next months will be interesting to watch, as the market is moving faster, now that Nikon and Canon also have mirrorless solutions. 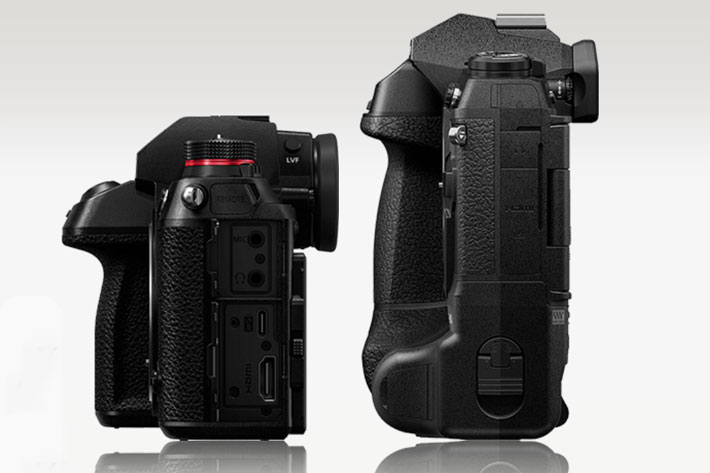 Canon and Nikon have surprises

With Panasonic taking what looks like a bold step towards full frame, Canon announcing it is going to speed up mirrorless operations, with the new EOS RP to be announced this February, which Nikon also chose as the month to talk further about its mirrorless system, and Hasselblad apparently ready to announce a new medium format camera, 2019 is going to be an exciting year.

In terms of events, WPPI begins in Las Vegas on February 27, and the  CP+ show in Yokohama, Japan, starts one day after, on February 28. NAB 2019 in Las Vegas is next, April 6 until 11,  so there will be plenty of events to show new products. In the midst of all this, Canon’s CEO Fujio Mitarai said, in an interview published by Nikkei, that he believes the digital camera market could shrink by half over the next two years. 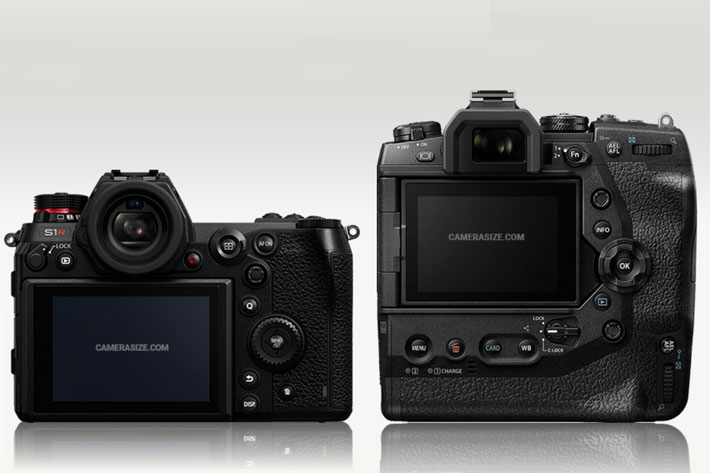 Let’s compare some of the data available for both cameras, to help readers decide which they want. The Panasonic Lumix DC-S1 has a 24.2MP full-frame MOS sensor against the Olympus M1X 20.4MP Live MOS Micro Four Thirds sensor. In terms of viewfinder the Panasonic Lumix DC-S1 has a 5.76m-Dot 0.78x-magnification OLED LVF and the M1X a 2.36m-dot 0.83x Electronic Viewfinder. Both have touchscreens, the Lumix a 3.2″ 2.1m-dot Triaxial Tilt Touchscreen, the Olympus a 3.0″ 1.037m-dot Vari-Angle Touchscreen.

In terms of video, the S1 offers UHD 4K60 Video and HDR and 10-Bit recording, with all the experience Panasonic has in the area, and the Olympus M1X goes for DCI 4K/24p & UHD 4K/30p video recording. I know there is more info about these modes and options, but in terms of video I believe this is enough for the purpose of this article.

Image stabilization is based on sensor-shift on the Lumix and Olympus, while focusing in the S1 uses a contrast-detect 225-area DFD AF system and the Olympus M1X features 121-point all cross-type phase-detect AF. The Panasonic Lumix DC-S1 does 9fps against the 18fps from the M1X, ISO range is 100-51200 on the Lumix and 200-25600 on the Olympus. The S1 uses XQD/SD cards, the Olympus uses SD, and both cameras have dual card slots. Both cameras feature weather-sealed construction.