When Nat Geo Channel India forgets to credit photographers, what hope is there for professionals? 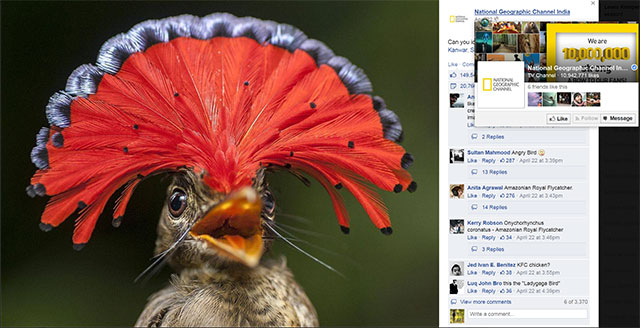 The Style Manual for National Geographic Magazine is clear: The content of photographic credits in NGM is the responsibility of the Photography department. The Art department is responsible for art and graphics credits; NGM Maps handles map credits. Editorial style for credits is determined by the magazine’s text staff. Clarity for the reader should be the ultimate goal. You expect clarity to be the rule wherever the Nat Geo logo appears, but it is not so, photographer Andrew Snyder discovered.

The image of a  Royal Crest bird has a story. Says Andrew Snyder that “for the last three years, I have spent my summers conducting biodiversity surveys with a team of other biologists and research assistants in the rain forests of Guyana. For our bird surveys, we set up a series of mist nets through the understory, and this Amazonian royal flycatcher was one of the birds caught. From previous experience, I knew that this species typically puts on its remarkable crest displays when handled, so while the team was taking their necessary measurements, I was able to make this photograph.” 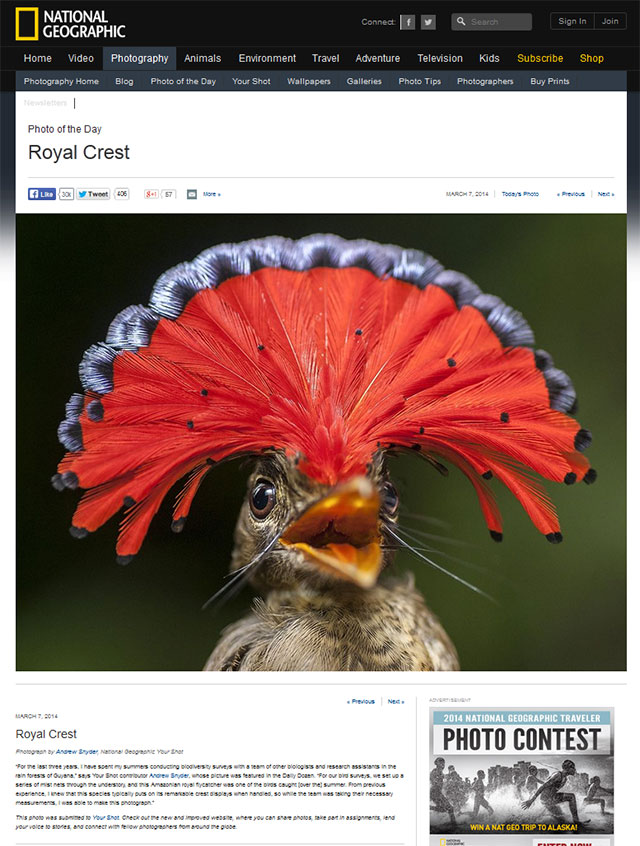 The photo was quickly selected by an editor, continues Andrew Snyder, “to make it to their 'daily dozen'. Though it didn't get the most votes, I was contacted that evening by them because they still wanted to feature it as their photo of the day. So it was shared on their homepage on March 7th, obviously with appropriate credit: Photograph by Andrew Snyder, National Geographic Your Shot”. End of story, thought the photographer.

Much to his surprise, the picture surfaced on the 23rd of April, on Facebook pages of  National Geographic Channel India, without any reference to author, something that seems usual for Nat Geo India. It's strange, as the info on the FB page states that this is the same Nat Geo that since 1888 “is committed to making and showing documentaries that explore the modern world from a unique perspective, while offering an unprecedented look at science, technology, history, investigation, wildlife and more. With its unparalleled access to people and places, NGCI gives you a novel way of looking the at the world, with smart, factual entertainment.”. Well, considering there is always people behind projects (and photographs) there should, probably, be a credit line for the photographer.

Andrew voiced his surprise in his own Facebook page, where he wrote, on the 23rd of April: “What's the deal here? Is National Geographic Channel India an actual affiliate with National Geographic? I would expect if so that they would give proper credit…Apparently everyone over there is really enjoying my flycatcher photo, hence over 134,000 likes and almost 18,000 shares, yet no where am I given credit. I've attempted to contact them and haven't received any response either.”

No Reply from NAT GEO

The photographers remark caught my attention and I have followed the story. Well, although Andrew contacted National Geographic Channel India immediately, he has not yet received any feedback. This led me to write this note, because it reflects much the way things work for photographers (or against them) these days. I 've experienced that myself, and most times it is difficult to get things right once they go wrong. Furthermore, these digital days, when “everybody  with a camera is a photographer”, the general public still has a wrong idea about what photography really is.

I've recently seen some comments on Facebook that confirm what I suspect: people think photography is an easy way to earn money. One of the comments I see on some photographs, especially in these days we live, is something like this: “nice shot. Have you thought about selling your work? I know a guy that was unemployed and won a competition with a picture he made…” Obviously, let me state this,  those people suggesting someone to sell their photos and passing on the idea that winning a competition is the way to become rich, have not been reading the news…

Photographers have a hard time selling their work, and also have a hard time trying to find support for projects. When I recently published a collage of  some of my recent images for the Meet Your Neighbours project, a series of flowers against a white background, someone asked me if I had thought about selling the photos to a scientific magazine. I wish I would, but not many people seem interested in them. At least last time I asked for some kind of support for my MYN project, all doors were closed. That was some two years ago.