NASA started to use 4K for their videos at the International Space Station, and YouTube has the first example. More are coming soon, says NASA. 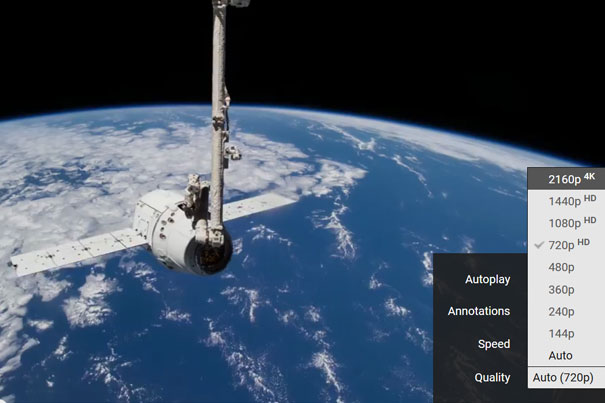 The NASA move to 4K reflects the changes at Youtube, that since May started to use 4K at 60fps, to celebrate 10 years of the video platform. Although many users are not aware of the fact, 4K is slowly being available around us. And 8K is already out there, but hardly any computer has the power to show it.

Online, the move to 4K started earlier, when, in December 2014, Vimeo offered the first videos in 4K. Some users had already uploaded videos in 4K, but it was not possible to see them in 4K until Vimeo decided it was ready to do so. Streaming will come next, but for now viewing 4K – if your computer, monitor and graphic card can take it – is an option, both in Vimeo and now in YouTube.

YouTube users have, since October 2014, the option to upload and see HD footage at 60fps, but now with 4K at 60fps, the bar for video quality is taken higher. YouTube is experimenting with 4K at 60fps, not yet common but something that, it seems, we will be seeing a lot in the future. For now, examples of video in 4K – and not timelapses – come from outer space. Somewhere above our heads, at the International Space Station, 4K is becoming the norm for filming.

NASA is one of the first to explore 4K in very special conditions. On their ReelNASA channel at YouTube, NASA claims that “the view of life in space is getting a major boost with the introduction of 4K Ultra High-Definition (UHD) video, providing an unprecedented look at what it’s like to live and work aboard the International Space Station.” First they published a short “trailer” at 1080p and 60fps, but recently NASA uploaded the over 3 minutes 4K video.

Although Full HD is still being commonly used at the ISS, NASA said that “this important new capability will allow researchers to acquire high resolution – high frame rate video to provide new insight into the vast array of experiments taking place every day. It will also bestow the most breathtaking views of planet Earth and space station activities ever acquired for consumption by those still dreaming of making the trip to outer space.”

The first video published is the start of a new era in terms of what can be seen at the NASA channel in YouTube. Additional 4K–UHD videos will be coming to ReelNASA soon, according to NASA. Although 4K is a number that attracts attention, videos online offer lower resolutions, so everybody can watch them, independently of the computer used. In fact, many computer still can not cope with 4K.

The first 4K movie from NASA is not the first 4K experiment coming from the ISS. In fact ESA (European Space Agency) has published in their own Youtube channel some 4K videos, but made from timelapse sequences photographed from the International Space Station. One of the most popular videos is from German astronaut Alexander Gerst, a six-minute timelapse published in December 2014.

The video is made of 12500 images taken by Alexander Gerst during his six-month Blue Dot mission on the International Space Station. The astronaut would set cameras to automatically take pictures at regular intervals while working at the space station. The result is a unique view into the best our beautiful planet has to offer: auroras, sunrises, clouds, stars, oceans, the Milky Way, the International Space Station, lightning, cities at night, spacecraft and the thin band of atmosphere that protects us from space.