After months of planning and preparation plus several days out in the dusty desert and 4 days of teaching, meeting, walking and networking at the expo and conferences; NAB Show 2015 has come to an end. In addition to the great new product announcements from manufacturers such as DJI and 3DR, there were also many firsts this year with sold-out Aerial Videography workshops and the all new Aerial Robotics and Drone Pavilion with a giant flying cage. We got lots of photos and videos of what you may have missed this year – but hopefully it’s incentive to join us again next year! 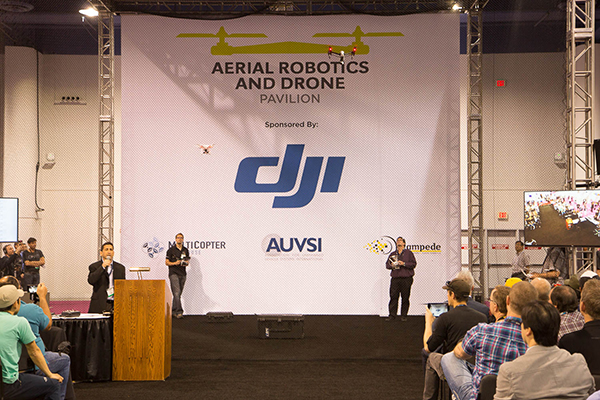 In 2014, Future Media Concepts successfully launched the first ever remote field trip workshop specifically for learning about UAVs/Drones for aerial photos and videos through the NAB 2014 Post|Production World Conference. Led by Mannie Frances, who brought me on to be a lead instructor/presenter for the event to a sold-out crowd last year, managed to secure a prime location about an hour outside of Las Vegas in a well-photographed “ghost town” near Nelson, NV. Since then there have been a few others that have followed in his footsteps with similar events, such as Russell Preston Brown’s Aerial Video workshop at Photoshop World last September, to which I was also brought on to be an instructor and video editor.

Drawing from experience of the past workshops, Mannie brought me on to help him coordinate and manage the workshops this year, creating two-full days (beginner/advanced) of aerial flying out in Nelson, NV with again, sold-out crowds with about a dozen instructors and sponsors that brought out amazing gear and demos for each day.

Here’s a video produced by Multicopter Warehouse feature some of the events from Saturday’s workshop:

It was an amazing kick-off to a week of training, demos and networking at the NAB Show. We’re looking forward to exploring the possibilities for next year!

Here’s a video that one of our instructor (TJ Diaz) and his team at Xfly Films shot and produced from both days to be shown in a loop at the Aerial Robotics and Drone Pavilion throughout the following week:

Again, credit goes to Mannie Frances for working with the folks at NAB to provide a dedicated place at the show specifically for drones. As we worked together to manage the schedule for the presentations at the 85-seat Drone Pavilion flying/demo cage, we also brought in a quite a few exhibitors that would have normally gotten lost in the shuffle trying to bring their products/services on display at this show. Having an integral and focused venue for potential customers to find them – plus the ability to network with other developers and service providers, made this innaugural year such a success!

The flying/demo cage was a huge draw this year. With presentations from some of the top experts in the business of UAV imaging and legal experts discussing the FAA regulations, to amazing flying demos from manufacturers and exhibitors alike – showing small quadcopters all the way up to large heavy-lifters carrying a RED Epic. Whatever the event, we found the area was standing room only all around the cage as well as the seating/presentation area.

With so much attention and traffic coming through the entire Aerial Robotics and Drone Pavilion this year, we got a congratulatory VIP visit from Gordon Smith, President and CEO of NAB on the last night of the show for a tour of what the big draw was all about. He was duly impressed!

Looking forward to bigger and better things at next year’s NAB Show, I’ve edited a highlight reel over the entire week’s events this year, and hope that you’ll join us for exciting new adventures in 2016!

With all the buzz in the skies over the personal drone industry the past couple of years, there is...