A grab-bag of cameras, support kit, drones, and more

Herewith I collect interesting things I haven’t written about already: mostly cameras and support kit, but there’s other stuff, too… 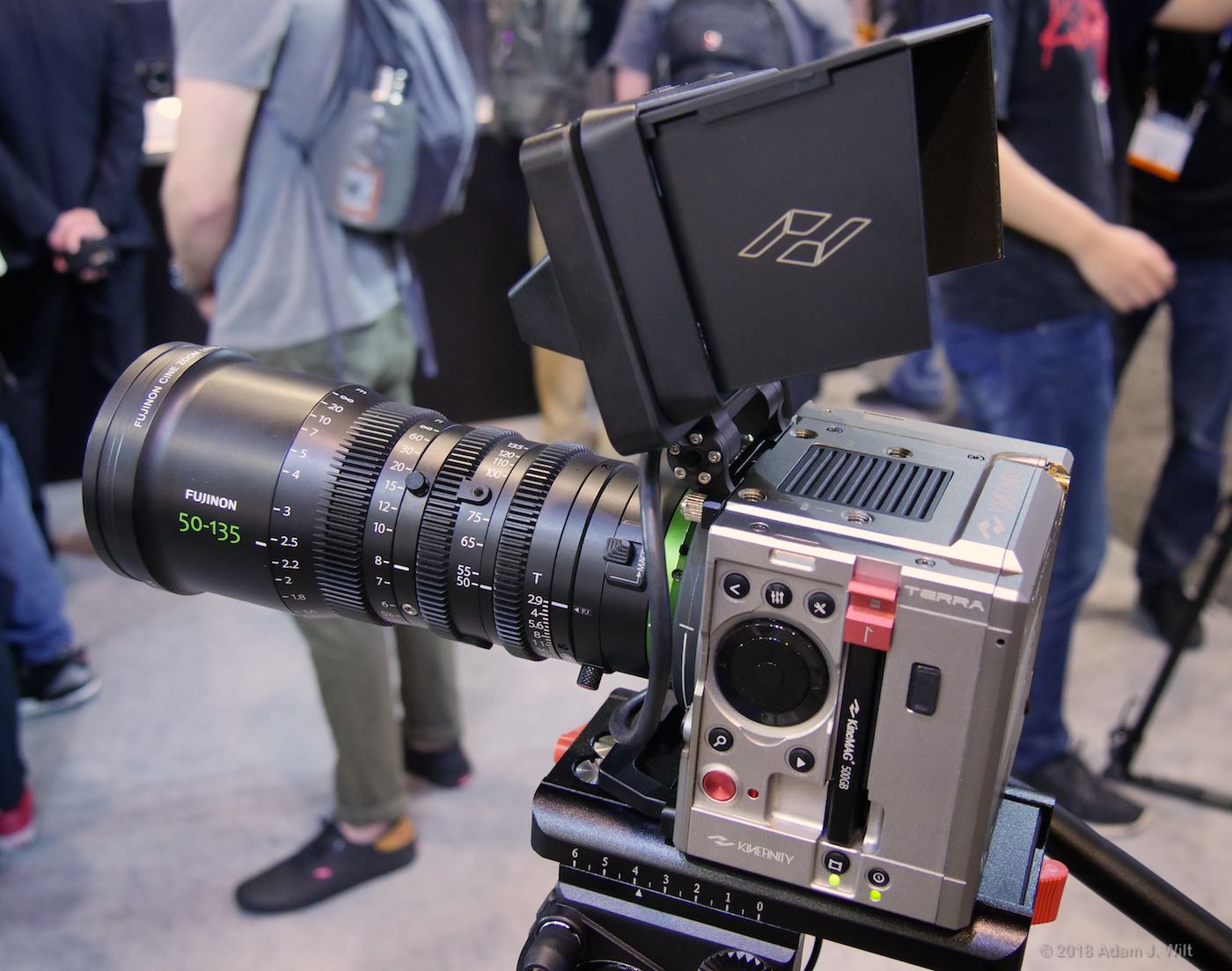 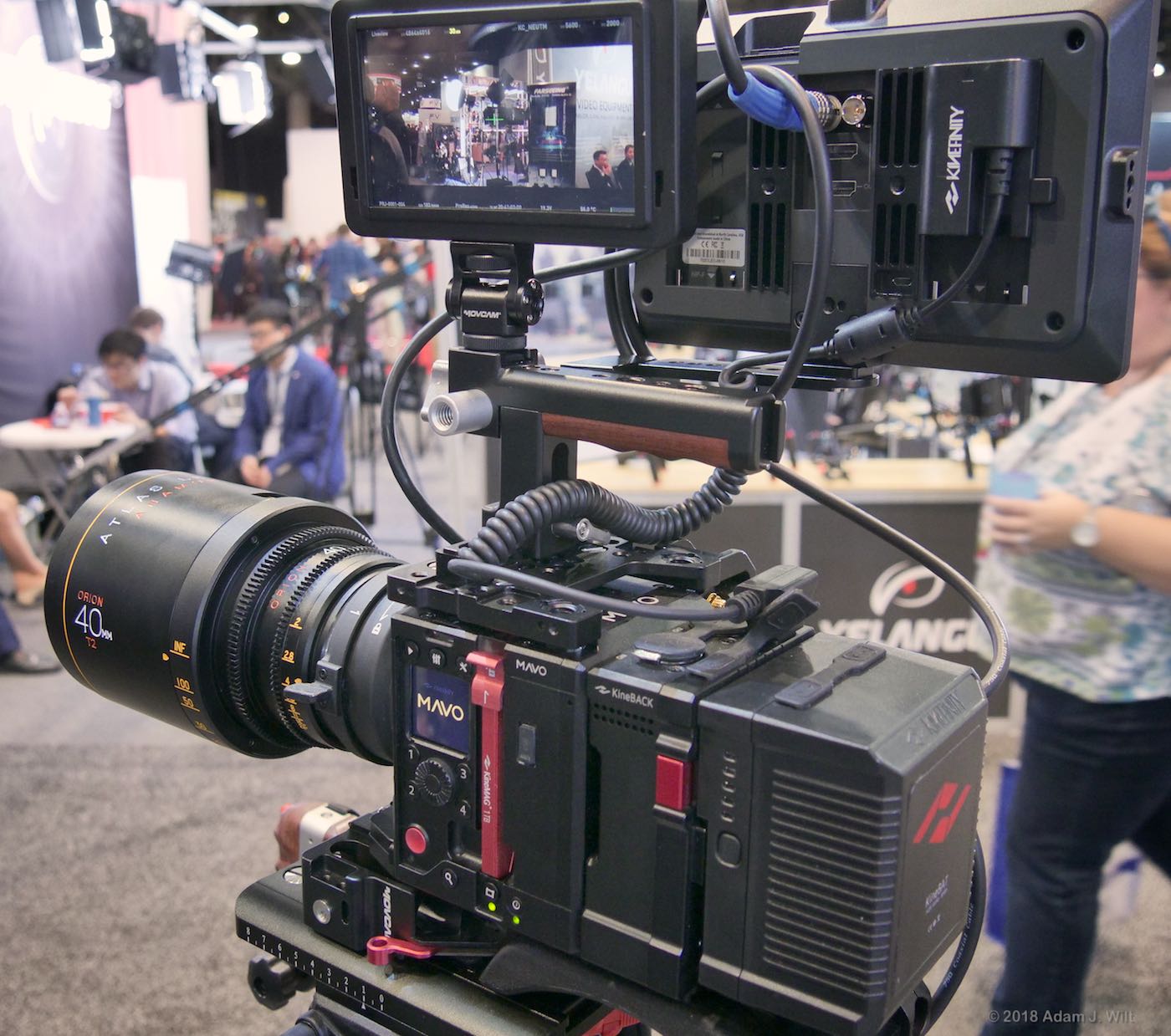 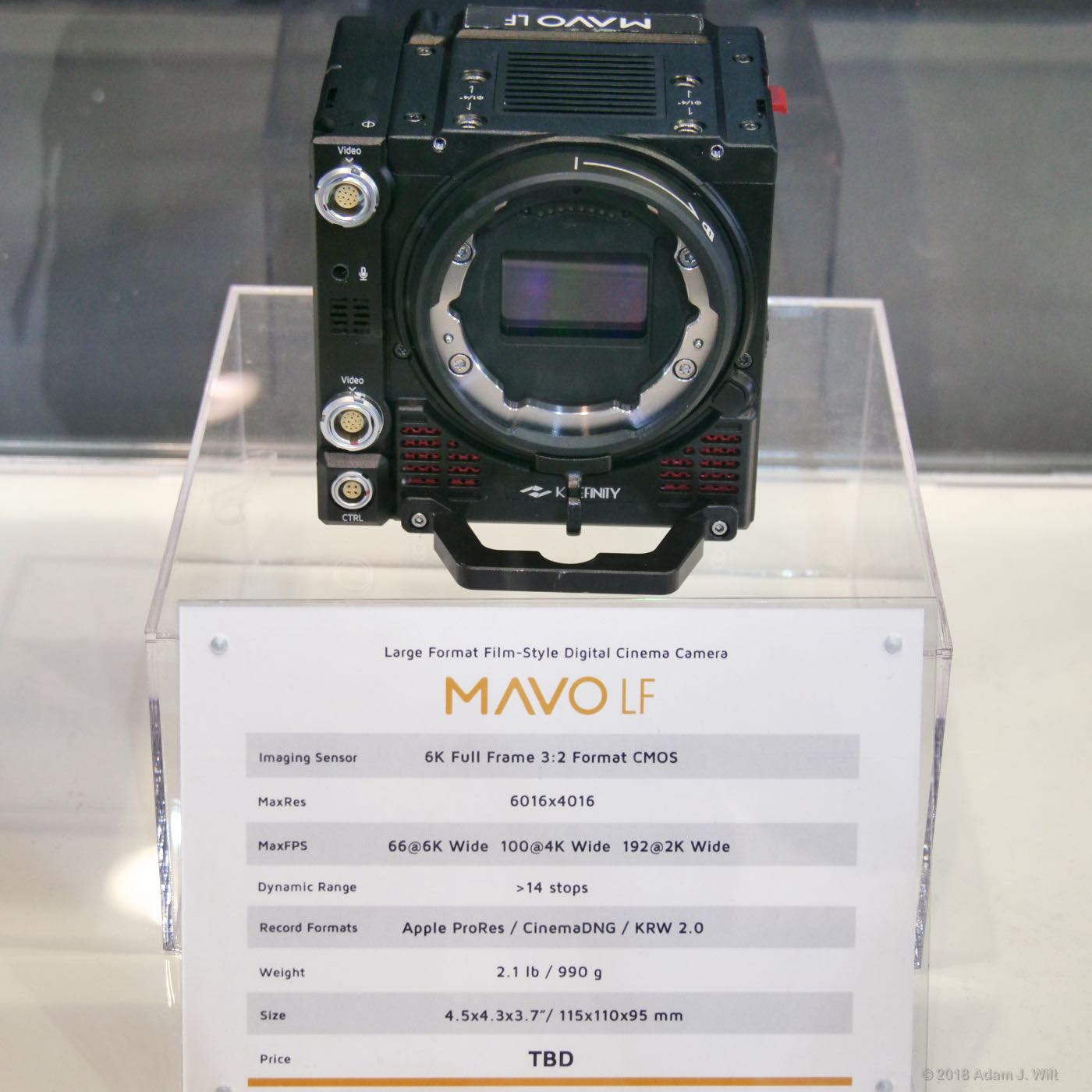 Brian Hallett has more details on the MAVO and MAVO LF.

Nikon had a huge booth, featuring their new 4K-capable D850 DSLR alongside camera robots and pods from Mark Roberts Motion Control, which Nikon bought recently. MRMC has long been known for camera robotics and their acquisition by Nikon caused more than a little surprise. Almost half the booth was Nikon cameras and lenses — and the D850 Filmmaker’s Bundle, a package combining the D850, an Atomos recorder, a set of primes, and a couple of microphones. The rest of the space was given over to MRMC “Bolt” high-speed camera robots and remote-control camera pods. Another Bolt was set up in the lobby of the Central Hall, where it invited passersby with a sign saying “Let’s Dance”. The Bolt swung a D850 shooting 120fps HD around while giddy attendees styled their latest moves in front of it; a moment later the 24fps slo-mo playback appeared on monitors. 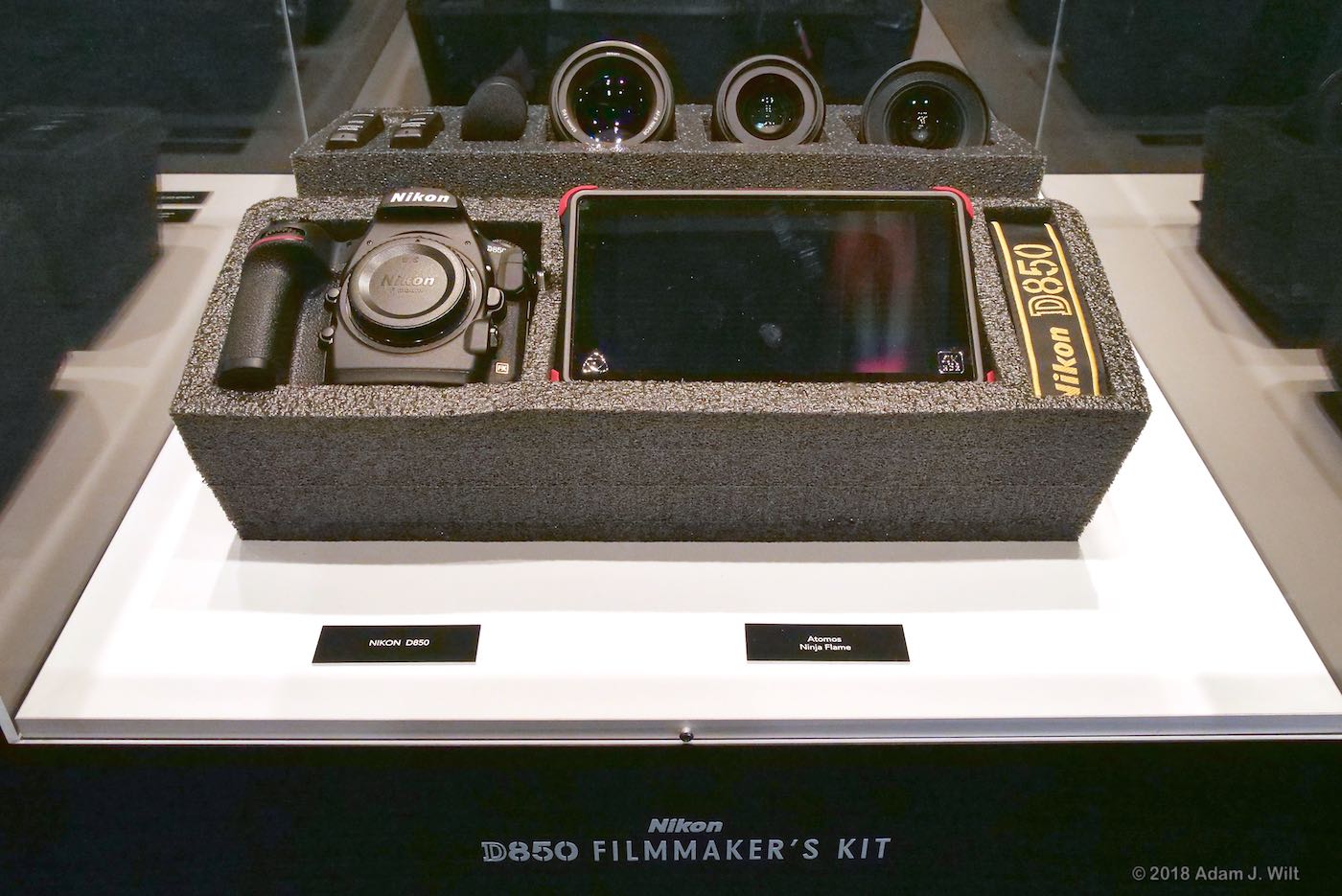 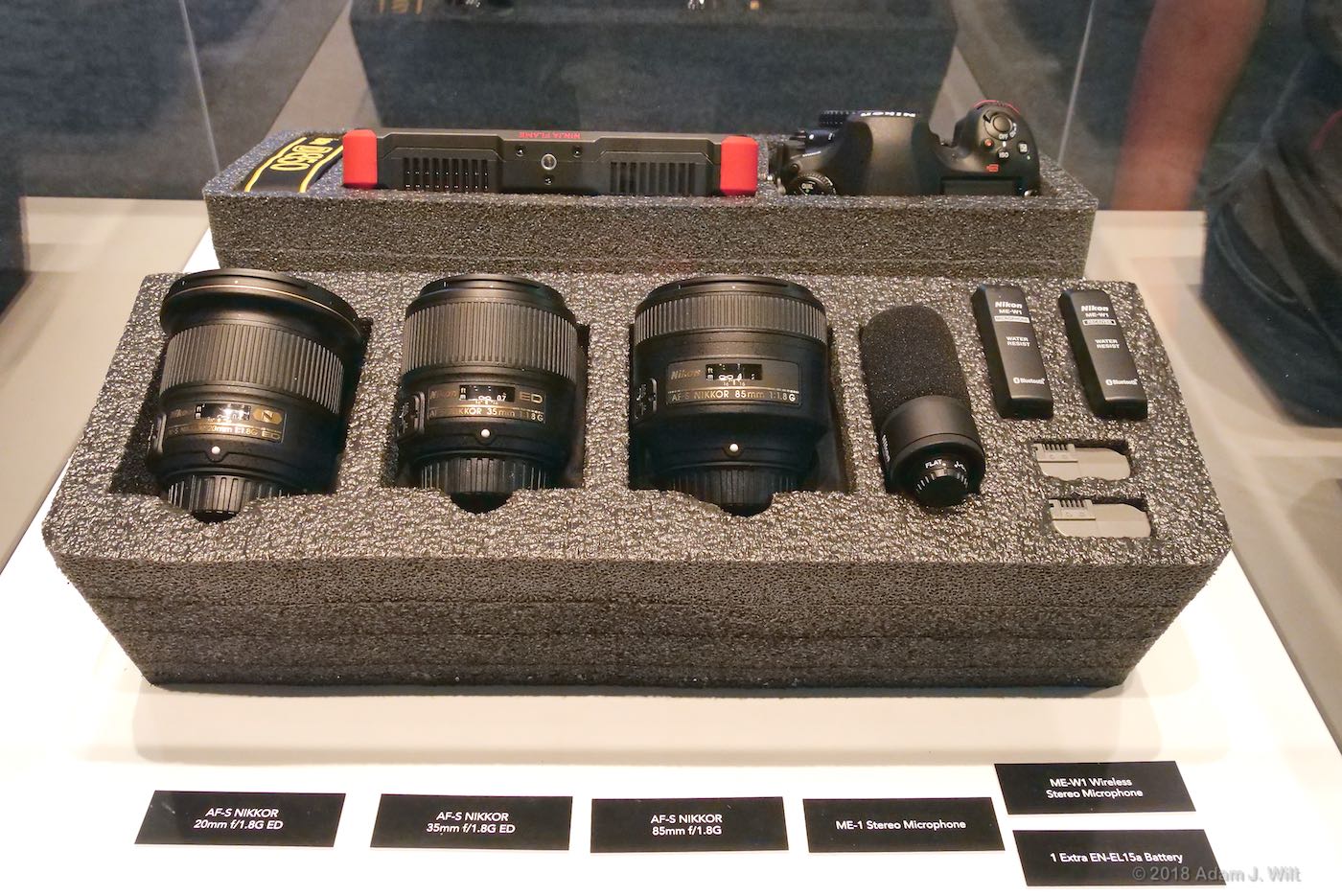 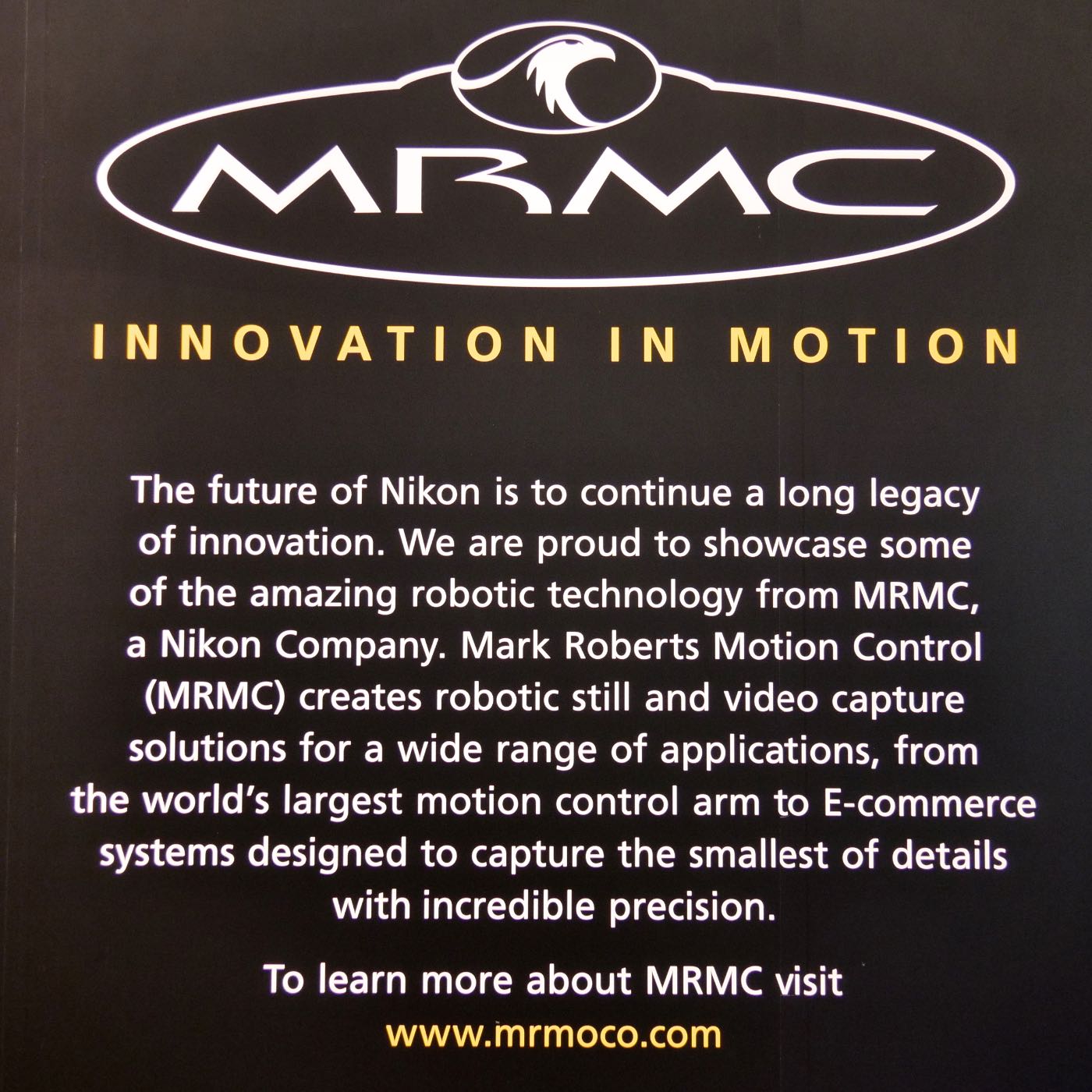 Canon throws a press dinner, at which Larry Thorpe gives a brief talk. I snagged pix of a few of Larry’s slides discussing the C700FF full-frame camera.

Redrock Micro previewed the DigiBoom, a handheld carbon-fiber camera boom with a gimbal on the end. It includes repositionable hand controls for camera and gimbal, integrated cable routing, and video monitoring. It’s extendable with additional sections. It clips to a lanyard around your neck and is light enough to carry for hours. While it’ll fly any camera up to 6.5 pounds, lighter is better according to those who have used it.

These Titan-11 arms are cleverly designed to modulate joint friction so that the arms don’t just suddenly dump their loads, as others of their kind tend to do. Bright Tangerine also showed off a new quick release mount, visible at the base of the arms.

This Tilta lens control system uses the most elegant, small motor/receiver I’ve seen — it probably won’t spin your Angenieux 24-290 but it’s fine for DSLR glass. The wooden handwheel clips to the side of the gimbal, or it can be detached for an AC’s use. Both motor and handwheel use their own batteries and their own radio channel. The Nucleus-N series isn’t shown on Tilta’s site yet; I think these were prototypes or early production models.

Wooden’s Zip Focus is one of those “why didn’t I think of that?” designs. Instead of using a bridge across both support rods, the Zip Focus clamps to a single rod. That makes it easier to swing out to accommodate fatter lenses or to allow faster changes, and it’s a lighter, simpler mechanism. Yes, if you hang a heavy whip off it, or  your idle hand, it may sag more readily. Just make sure you keep the clamp tightened.

Japanese telecoms firm NTT DOCOMO showed off the Spherical Drone Display: a drone encased in a globe of spinning light bars, surrounded by a geodesic framework that may help keep intruding fingers from being turned into mincemeat (I’m guessing; I didn’t test this theory).

All the major lens vendors were showing off 4K and 8K capable lenses. As all these lenses look just like their HD predecessors, I didn’t bother shooting photos. Instead, some more interesting things…

Want to add some colorful “character” to your pix? These EF-toE-mount or EF-to-MFT adapters use colored sleeves so you can lenswhack some flare into your pix without having to handhold the lens. Newsshooter has a good writeup. 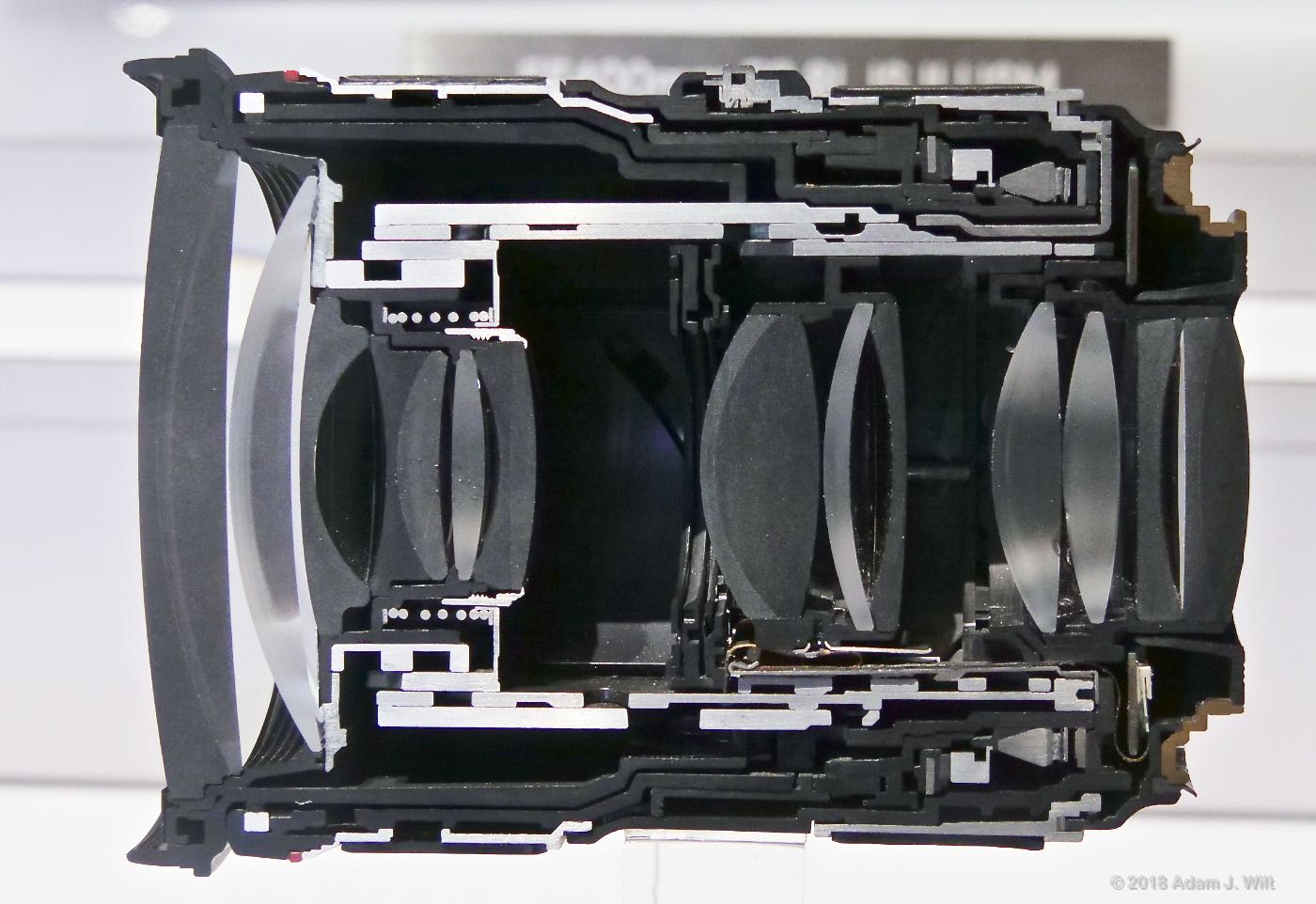 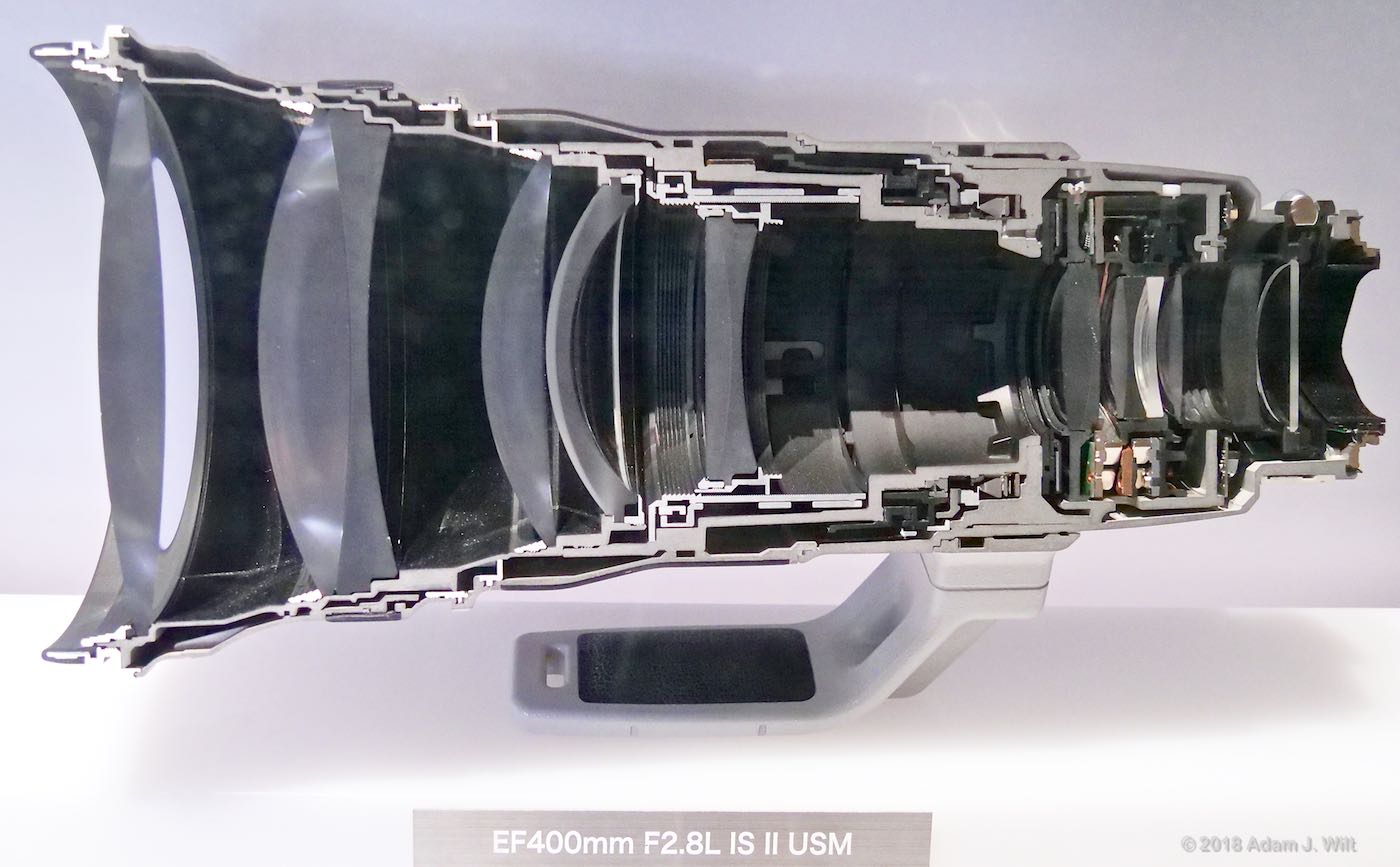 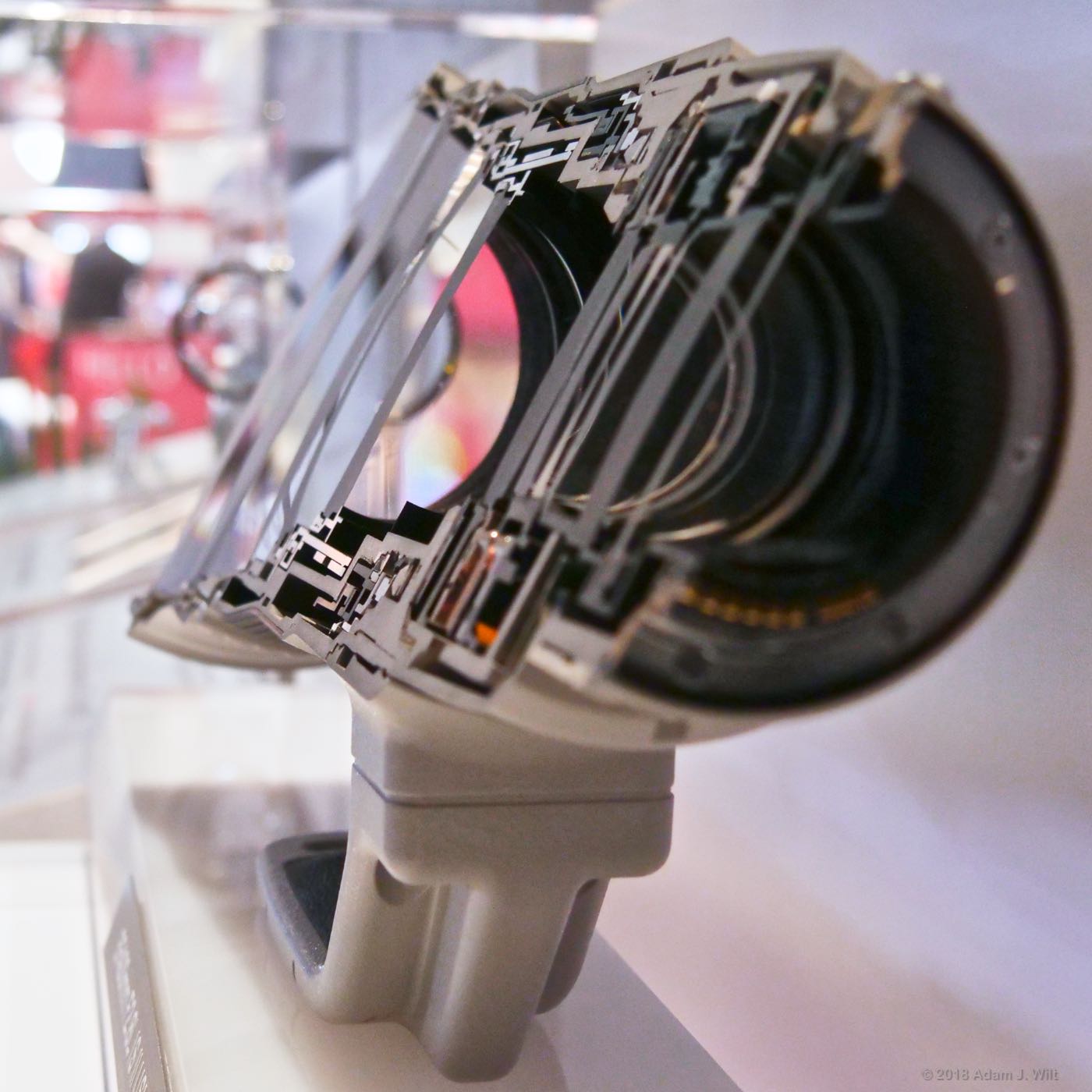 Disclosure: I attended NAB free on a press pass but paid my own travel / food / lodging expenses. I attended Canon’s press dinner, so that’s why there are C700FF slides in the article. I included them because they’re interesting, not because I got fed. The DVInfo.net folks are my friends and I’ve written for DVInfo in the past; I also attended their Monday night get-together and had dinner with ’em on Sunday. If you think that unduly influenced me to give ’em a shout-out, feel free — but consider that I also link to articles and videos by PVC’s own Brian Hallett and Newsshooter.com, and neither of them fed me anything. Those aside, there is no material relationship between me and any of the vendors or organizations mentioned and nobody offered payment / bribes / blandishments of any sort for coverage.