Blackmagic Design uleashed a campaign of “shock and awe” with the announcement of not just one but two cameras at NAB2013.

In this video, HDSLRShooter talks to Kendall Eckman about each surprise package, starting with the Blackmagic Production Camera 4K.  Here's what we know so far.

Equipped with a large Super 35 sensor, professional global shutter, EF mount, and ProRes 422 recording, the Blackmagic Production Camera 4K is able to shoot “Ultra HD”. This endows the BPC with the ability to shoot in beyond high resolution and is in line with the new wave of 4K mania.

Besides Ultra HD, the BPC can shoot in 1080HD in 23.98, 24, 25, 29.97, and 30 frames per second. Blackmagic says that the camera will allow for the highest resolution “…music videos, episodic television production, television commercials, sports, documentaries, news stories, interviews and feature films.”

Along those lines, the BPC possesses a 6G-SDI connection (along with its other standard connection ports), enabling it to produce live video. The Super 35 sensor helps retain image quality regardless of lens, zoom level, etc., keeping the shooter's lens options wide open, and has 12 stops of dynamic range for increased detail capture.

The BPC shoots in open file formats (Apple ProRes and CinemaDNG RAW) that make it easily usable with the variety of editing softwares available. With a wide variety of features, ports, and options, it's clear Blackmagic is trying to make this camera an all in one Ultra Hi Res solution for whatever video project you may be shooting. 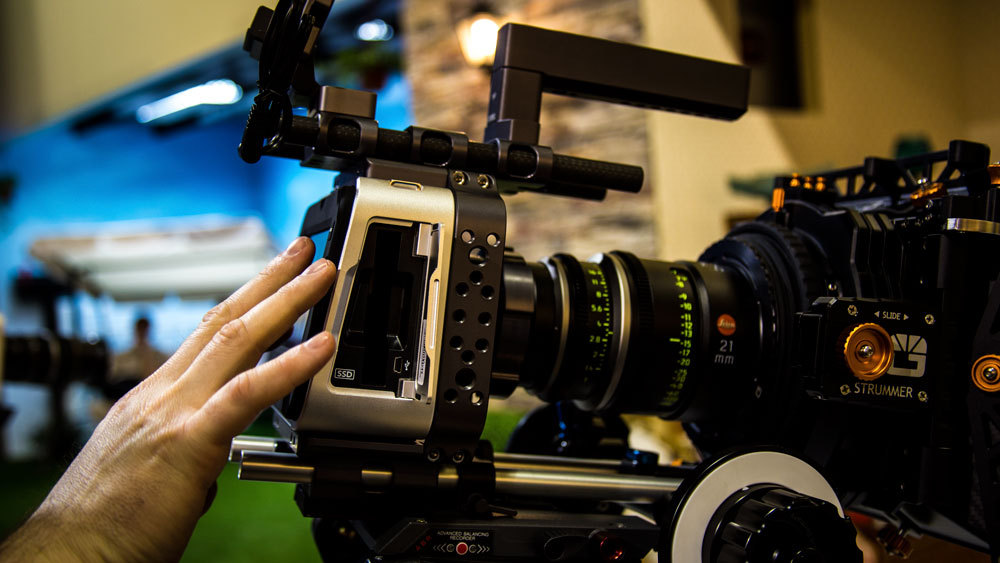 Made of high grade aluminum, Blackmagic promises it will “…easily handle the rigors of location work.” It also features another little surprise, a touchscreen, which is a departure from the original, providing an easily navigated menu and settings, as well as the entry of meta data too. The body also possesses a built in SSD recorder for recording onto solid state disks. The camera comes with copies of UltraScope and DaVinchi Resolve for live scoping and color grading respectively. 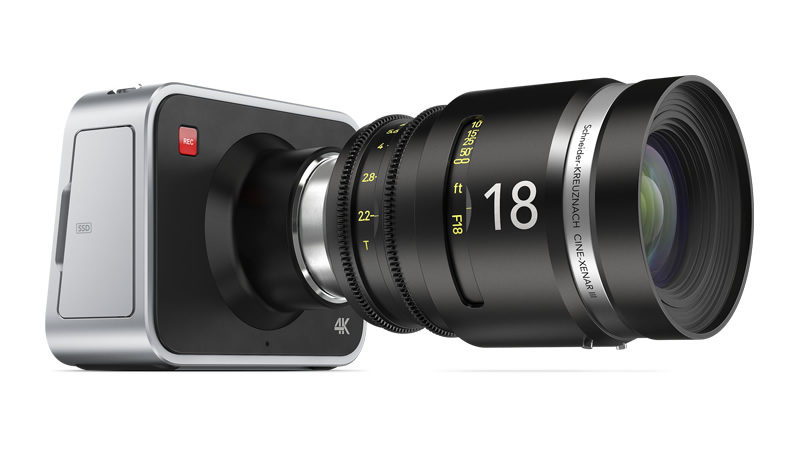 The Blackmagic Production Camera 4K will retail for the price of $3,995 USD, and will be available for purchase July 2013.

You can find out more about the Blackmagic Production Camera 4K at BlackmagicDesign.com

Blackmagic Production Camera 4K will be demonstrated on the Blackmagic Design NAB 2013 booth at #SL218.

The new Blackmagic Production Camera 4K also supports the new 6G-SDI video connection out so it can be used on live video production.

Blackmagic Production Camera 4K has been designed with portability and durability in mind. With standard connections and an internal battery packed inside a beautiful machined aluminum design, the Blackmagic Production Camera 4K will easily handle the rigors of location work. A high resolution LCD display shows settings such as shutter speed, color temperature, aperture and timecode in an easy to read status strip. The built in capacitive touchscreen offers direct access to menus with a touch of the finger and allows changing settings such as recording format, shutter angle and more. The touchscreen also allows users to enter important metadata that is compatible with popular video editing software including Final Cut Pro X.

With a large Super 35 size sensor, cinematographers get familiar framing and behavior from the lenses they already own. This camera sensor features a global shutter and its large size allows minimal crop factor so cinematographers get nice wide angle shots from their wide angle lenses. When working in HD customers can use the high resolution images to reframe and zoom into shots without any quality loss.

With the built in EF compatible lens mount there is a wide choice of optics to take advantage of the large Super 35 size sensor without cropping. Cinematographers get the choice of the world’s most amazing optics from leading lens crafters like Canon, Zeiss and more, with full electronic control. The EF compatible lens mount means customers are not locked into a specific lens and even professional cinema lenses with EF mount with professional rails and follow focus accessories can be used.

The Blackmagic Production Camera 4K easily captures 4K in compressed CinemaDNG RAW and ProRes 422 (HQ) using the built in high speed SSD recorder. Once the shoot has wrapped, the disk can be connected to a computer for editing or color correction of the shots straight from the disk, which can be formatted in either HFS+ or ExFAT for Mac and Windows compatibility. In addition to the regular CinemaDNG RAW format, Blackmagic Design will also implement a QuickTime wrapper for the open standard CinemaDNG and companion codec, allowing the camera to record in a format that allows RAW editing in popular editing software.

The wide dynamic range of the Super 35 sized sensor can be mapped into the quantizing range of the file so you can color grade shots to allow greater detail in highlights and shadows. When working fast, the customer can also record to regular Rec. 709 video files.

Blackmagic Production Camera 4K uses standard connections, so customers do not need to worry about sourcing custom cables. The camera features 6G-SDI output that can be down-converted to HD or used for amazing quality Ultra HD video. In addition, the device includes a built-in Thunderbolt port and UltraScope software for real time waveform monitoring. For audio you get 1/4″ jack mic/line inputs plus 12V to 30V DC input, a 3.5mm headphone socket and LANC remote control. And with a built-in uncompressed audio recorder you can eliminate post audio synching altogether.

“Customers have been asking us to design a camera with global shutter and a large sensor. With the Blackmagic Production Camera 4K we have delivered that, plus the high resolution needed for the latest Ultra HD production work,” said Grant Petty, CEO, Blackmagic Design. “This is a very exciting camera and it produces amazing looking pictures that we are sure everyone will love. It’s going to allow Ultra HD programming to be simple and easy!”

Availability and Price
Blackmagic Production Camera 4K will be available in July for US$3,995 from Blackmagic Design resellers worldwide.