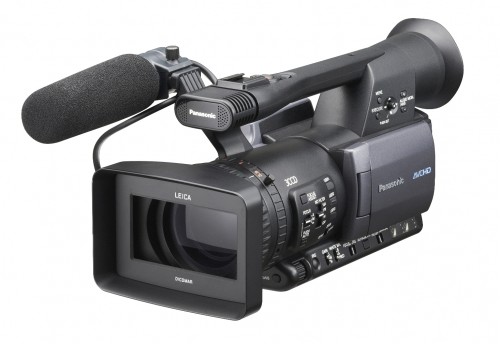 Panasonic also used the press conference to introduce us to the AG-HMC150 handheld.

Full on press release goodness after the jump.

With an exciting range of professional-level features and a sleek, compact design, the HMC150 can record hours of high-quality 1080 and 720 HD images onto solid-state SD and SDHC memory cards, at lower bit rates than current HDV compression formats. This new model offers an enhanced quality mode at average 21 Mbps (Max 24Mbps) that moves quality up even further. The AG-HMC150 camcorder utilizes AVCHD, the industry’s newest long GOP compression standard based on MPEG-4 AVC/H.264 high profile encoding (the same as Blu-ray HD players). AVCHD provides a near doubling of bandwidth efficiency and improved video performance over the older MPEG-2 compression used in HDV formats and standard definition DVD players. AVCHD high definition recordings look clean and clear, even during fast motion, reducing the image degradation or dropout associated with HDV.

With the HMC150, videographers can capitalize on the cost advantages, reliability, and widespread availability of SD and SDHC memory cards. Using just one 32GB SDHC card, users can record three hours of full pixel 1920×1080 video and audio at PH mode, four hours at HA mode and 5.3 hours at HG mode. In the HE mode, the camera can record up to 12 hours of 1440×1080 HD content – all on a single 32GB SDHC card. Panasonic also offers a variety of other SD and SDHC card sizes with Class 6 performance including 16GB, 8GB, 4GB, 2GB and 1GB.

Content shot on the HMC150 can be played back directly on a wide range of widescreen flat panel displays, and front and rear-screen projectors, directly from the camera. Unlike HDV tapes, SD cards with HD content can be inserted into and played back on a growing number of affordable playback devices including Blu-ray players (like Panasonic’s DMP-BD30), the Sony PlayStation 3, and some new Panasonic plasma displays as well as computers with an SD card slot using applications that play AVCHD files. Using NLE software, content can also be edited and rendered in various formats and delivered on a wide range of media. Currently, AVCHD is supported by over 30 companies and implemented in numerous camcorders, NLE systems and consumer HD playback devices.

Professionals can instantly transfer content from the HMC150 camcorder to Mac or PC computers with an SD/SDHC card reader or by connecting the camcorder directly via its USB 2.0 interface. Other standard interfaces on the camera include HDMI out, component out (mini D terminal), composite out, remote jacks for zoom, focus iris and start/stop functions. The camera’s 3.5-inch LCD monitor displays content in thumbnail images for quick viewing.

Panasonic’s AVCCAM camcorder line-up brings the benefits of solid-state recording to budget-conscious professionals. Like digital still photography, recording onto SD/SDHC cards offer a fast and simple, file-based workflow with ultra-reliable performance and resistance to shock, vibration and extreme temperatures and weather. SD and SDHC memory cards are inexpensive and widely available and can be reused repeatedly. Since AVCHD records video as digital data files, content can be transferred and stored on affordable, high-capacity hard disk drives (HDD) and optical storage media and transferred to future storage media as technology advances.

The HMC150 will be available this fall at a suggested list price under $4,500.