Since the crash of Zano, the mini-drone crowdfunding campaign that ended with a bankruptcy story, that backers at Kickstarter are cautious about drone campaigns. Despite the fact, few could resist backing the Mark drone. 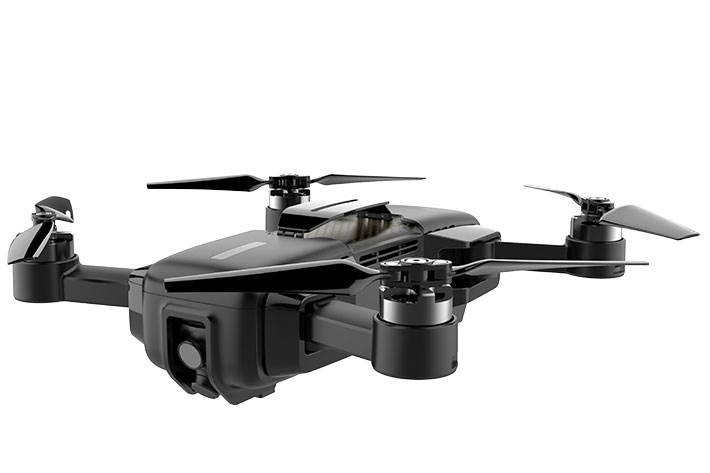 With VIO technology similar to the one used in the Mars Rovers, the Mark drone from Shenzhen-based company HighGreat promises true autonomous flying for your aerial 4K camera system.

Lightweight, at 236 g, and affordable, at $239, the Mark drone from the Chinese company HighGreat is presented as the world’s first drone positioned by Visual Inertial Odometry. This foldable drone, with dimensions of 148x148x48mm when unfolded, is announced as the harbinger of a new future for drones, where GPS positioning gives place to Visual Inertial Odometry or VIO technology. 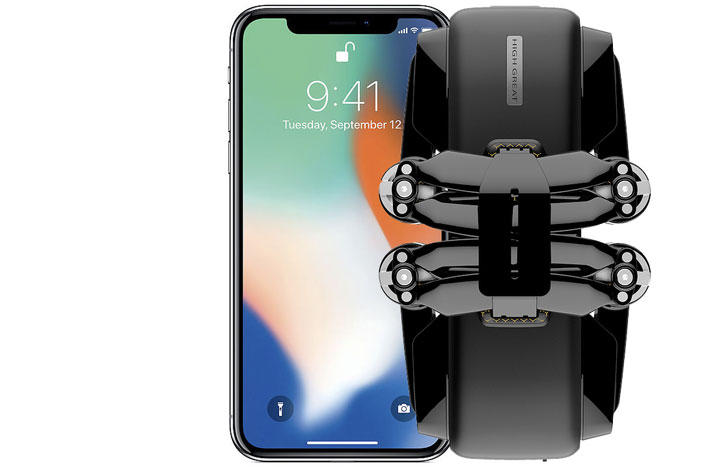 Based on Qualcomm Snapdragon platform this so called “world’s first VIO positioning drone” is based on what its creators say is “a brand new technology for drone control”. By replacing the traditional vision sensors and GPS with a 45 degree camera and deep learning technology, Mark can see the environment, know where he is like a human being. This enables, according to its creators, Mark to fly seamlessly from indoors to outdoors, providing an unobstructed flying experience.

As an aerial camera, the Mark drone is nothing to scream about. It offers a 13MP 1/3.06 “ CMOS sensor with electronic image stabilization, able to record stills and 4K UHD/1080p video at 30fps, in MP4 and MOV (MPEG-4 AVC/H.264). The built-in lens is a 28mm at f/2.2, which gives a field of view equal to 75°, associated with an automatic electronic shutter speed. The drone also has a wide-angle camera used by the VIO system.

A new direction for drones

The basic picture taking camera specifications are similar to other drones available, from the Hesper to the Dobby, what should not come as a surprise when one discovers that HighGear is the company behind those other drones. In fact, HighGear is not a newcomer to the industry; the company began as an OEM drone manufacturer and, after “accumulating many years of experience in the industry”, decided to, for the first time, “present our product in our own name.”

What this means to backers at Kickstarter is that, contrary to many other drone projects, like the Zeno, the Mark is a viable product, even more so, because in many aspects it represents an evolution from other models produced by HighGear. As I wrote above, this is not, as an aerial imaging platform, a revolutionary concept, but the potential it shows in terms of the use of Visual Inertial Odometry to help Mark locate itself based on position relative to its surroundings rather than satellites, realizing true autonomous flying, suggests drones are about to enter a new direction.

Removal of the need for GPS and compass means less errors due to loss of GPS signal, no need for compass calibration, things that in practical terms mean the user will have a more comfortable flying experience. The integration of Visual Inertial Odometry is what takes the Mark drone into a new direction, pointing out to what drones can be in the future, if the technology really works. Constituted of a fisheye camera (wide-angle situational awareness) and a GPU-based mapping module, the system allows users to fly the drone right out of the box with no need for compass calibration. It also allows for the creation of lighter drones – and more affordable, apparently – interesting “side effects”. 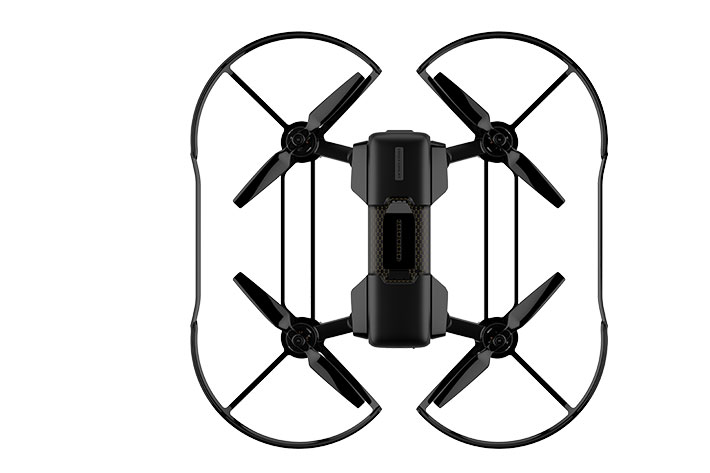 HighGear knows that making a drone lightweight and affordable without compromising all the functionality is not an easy job, but the company believes that VIO technology is the future and its integration helped to achieve that goal. They’ve worked for the past 2 years, exploring this technology breakthrough, and say the Mark drone with VIO technology can be more accurate than GPS drones. HighGear even compares specifications, indicating that Mark’s hover precision is always ± 0.1 m for both vertical and horizontal, indoors out outdoors, against variable numbers for DJI’s Mavic Pro and Spark.

If the numbers are correct, one has to wonder if the new drone to come from DJI, DJI Mavic Pro II, which is expected to be announced July 18th, will also use exclusively VIO technology (DJI’s Mavic Air uses VIO indoors). If it does, and DJI’s drones already offer obstacle detection, something, apparently, missing on the Mark, drone users would have a new “must have” drone in terms of technology. Visual Inertial Odometry may not be a term most consumers are familiar with, but visual odometry has been used with success in different places, including to guide the Mars Rovers.

VIO systems have been used associated with GPS receivers, allowing drones to work in areas where the GPS signals are not available, like inside buildings or tunnels, but the Mark Drone represents a step forward, depending exclusively on VIO, a clear indication that the initial limitations of visual odometry – accumulated error and drift – have been resolved so as to make it possible to use the technology in a small drone that fits inside a large pocket. 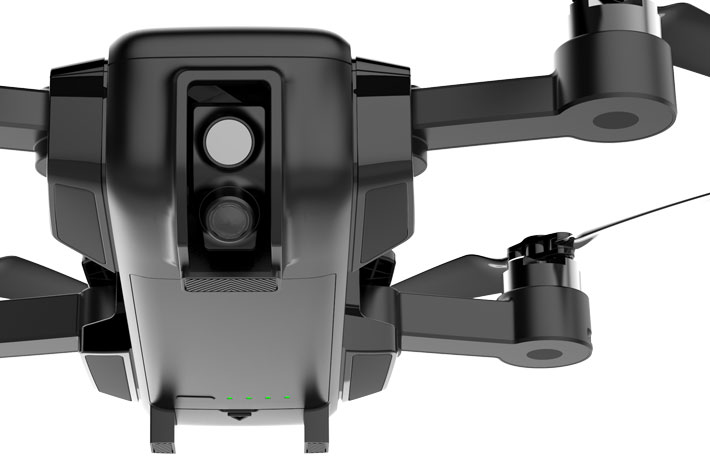 As a tool for videographers or photographers, the Mark may not be the most revolutionary,  but its size, weight, price and presumably easier flying experience make it something you may want to check. Yes, there is no gimbal, the memory may seem limited, at 16GB – users of similar drones say it isn’t –, and there is no option to add your camera to the drone, but as a take anywhere drone that gives you a different perspective in a small package, this is a product to check.

Able to fly for 20 minutes and up to a distance of 100 meters when controlled through a smartphone, the Mark drone reaches 250 meters when using the controller. Not to say that the drone can not fly further, HighGear indicates that “once reaching the limit, we have a limit switch on the app to let users choose if they would like to fly farther” although they will, let me add, do it at their own risk… 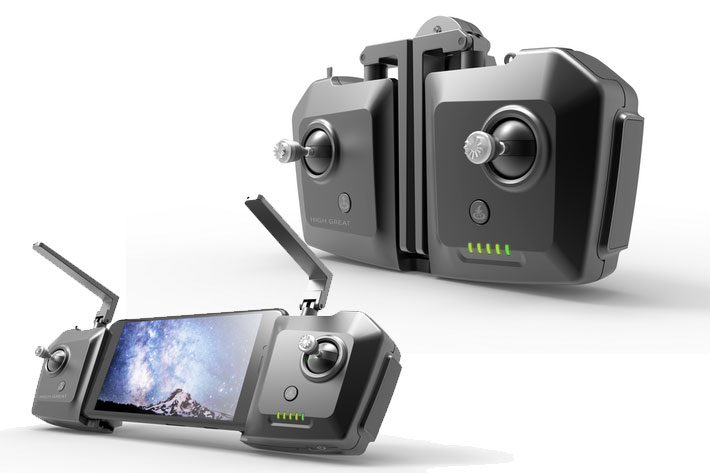 HighGear used Kickstarter to fund the production, as development was already finished for the Mark, and in the first 24 hours the project was funded. A total of 881 backers pledged $242,852 of a $31,857 goal, and the Mark still has 16 days to go. HighGear says the drone will be delivered in August to backers, and one can presume it will be available on the market soon after. With images of the production line published on the campaign website, and the track record of the company, it seems the Mark is a real product that consumers can buy, not always the case with some of the previous Kickstarter drone campaigns. This and the fact that this drone may represent the start of a new future for drones, makes the success of the Kickstarter campaign even more interesting as news.