Starring Kate Winslet and Willem Dafoe, Manou the Swift will arrive in theaters in the Spring of 2019. It’s LUXX Studios first animated film and the first time they use the new AMD powered workstations. 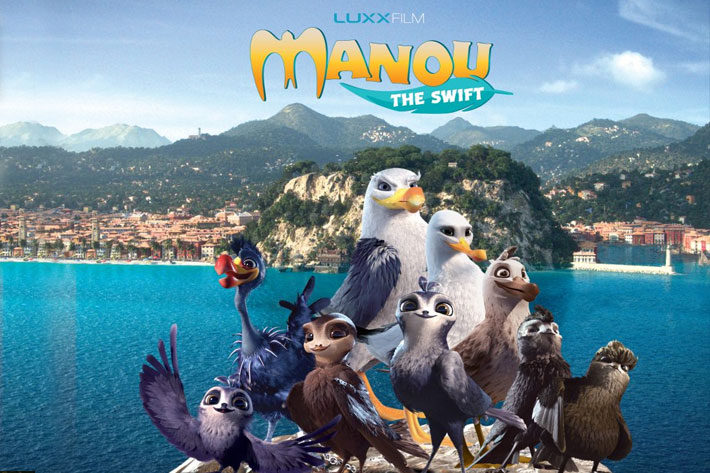 Manou the Swift features Kate Winslet, Willem Dafoe as the seagull “parents” of an adopted swift. It’s the first time they perform together, and also a first for LUXX Studios using AMD to power the graphics.

Known for their visual effects for films as Wes Anderson’s The Grand Budapest Hotel or productions as Independence Day: Resurgence or White House Down, the German LUXX Studios has taken a step in another direction, with Manou the Swift, an animated film about a swift that grows up believing he is a seagull like his parents. He strives to swim, fish and fly like them but seems not very gifted. At summer race he finds out why. To his great shock he was adopted as one of the much-hated Swifts. His family still stands by him, especially his brother Luc. When seagulls and swifts get into trouble Manou fights like a hero – mixing the best of inventive swift and courageous seagull.

Directed by Christian Haas and Andrea Block, founders of LUXX Studios, the film represents a milestone for the company, as it is its first full-length, animated feature. Manou the Swift is, according to the authors, “an Ugly-Ducking-meets-Romeo-and-Juliet tale of an orphaned swift raised by seagulls, voiced by Kate Winslet and Willem Dafoe.” It’s a debut for Kate Winslet and Willem Dafoe as far as performing together, although you’ll never see them on screen in this film, only hear their voices. 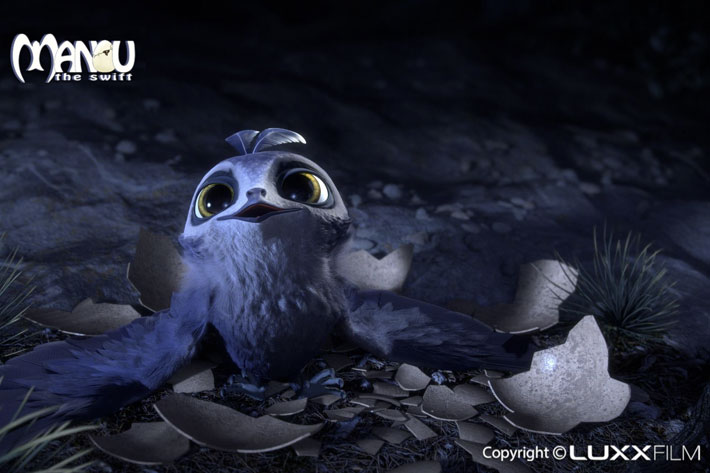 The actors in this story are birds, lots of them, apparently. The animation represented a challenge for the team at LUXX Studios, despite their experience  as a postproduction company for VFX and animation since 2006, and they created a complete animation feature film pipeline for “Manou the Swift” on 64bit management tools “to handle thousands of shots with ten thousands of Tasks, Feedbacks, Storyboards, Preview clips, Royal Render Jobs and more. We decided to design our own hand tailored tools to be faster, more flexible and more powerful on productions.”

As Warren Eng, Product Marketing Manager for professional graphics at AMD writes in a note published on the AMD Community blog, “one of the biggest challenges for small, independent studios like LUXX is budget. Large, established players in the business can throw as much as $100 million or more at an animated film. LUXX has a budget of €8 million ($9.5 million USD), roughly 1/10 the budget typically allocated for a major animated production. They need to find efficiencies wherever they can so that they can make the film look amazing without breaking the bank.” 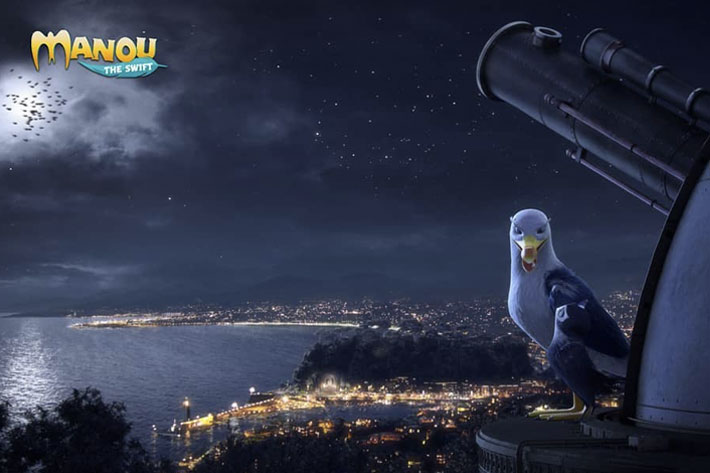 That explains why LUXX Studios has, since 2011,  developed, as they say, “a lot of great tools for our running projects. We build simple and very complex max scripts, Nuke tools with specialized features and a bunch of heavy standalone tools with the main goal to make our work more easy for artists, producers and Visual Effects Supervisors. The tools are refined every day and we extend them for each project.” Now they’ve built an entire pipeline for Manou, using not only the tools they regularly use in production, Autodesk 3ds Max, Chaosgroup V-Ray, and Foundry’s Nuke but also several off-the-shelf plugins to assist with fluid and hair simulations, and their in-house solutions.

In terms of hardware, it was also time to try something new, and that’s where AMD comes into the story. As all these applications and the effects they produce can place a heavy load on a system, LUXX decided to use AMD’s Ryzen Threadripper 1950X CPU and AMD Radeon Pro WX 7100 professional graphics card to help speed up their workflow. 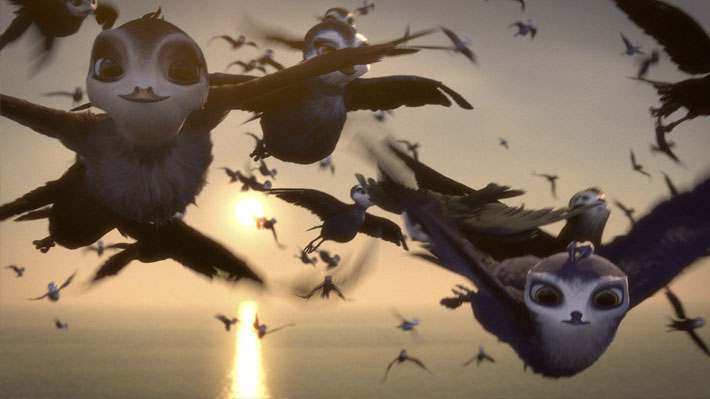 Using AMD to speed up output

According to Warren Eng, “they saw an immediate difference upon using their new AMD powered workstations. Not only were artists able to complete their shots faster, they were able to complete them better. The extra time saved allowed them to try different versions of the same shot, allowing more creativity to flow, and producing a better film as an end result.”

In a post on Facebook, the team behind Manou the Swift says that the special production value of the animated film are its ”detailed sets and well-designed environments of Nice. They are extremely complex with a level of detail that consists of billions of polygons, which were quite hard to handle in the past. But with the help of the AMD Radeon Pro WX 7100 graphic cards, we were able to speed up output frequency tremendously!“ 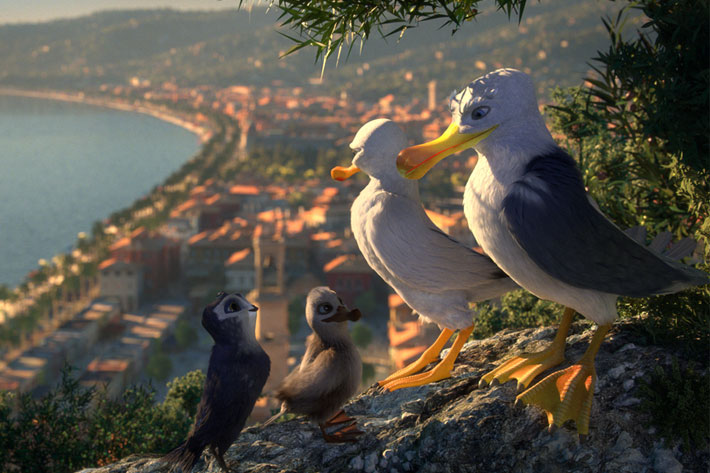 Nice from a bird’s point of view

The note confirms Warren Eng’s reference about the move by LUXX Studios from Intel processors to AMD. Eng writes that “LUXX’s previous rendering solution was a dual Intel Xeon based processor. The dual Intel Xeon E5-2620 CPUs took five hours to render a close-up of Manou, but when they switched their rendering to a single AMD Ryzen 7 1800X, the rendering time fell to under two hours per frame. This increase in power even enabled LUXX to reinstate shots that it had previously dropped on the grounds that they were too time-consuming to render.”

One final note before I close this piece of news: the available footage and stills were, from a personal point of view, quite interesting to watch, as I know the background for the adventure, Nice, having been there on work. I immediately recognized the views, even before reading the information made available, as the essential landmarks are present, even if this is a modified version using a bird’s point of view. As a photographer having climbed to the higher hills surrounding Nice to photograph the intricate patterns of the rooftops of the houses, I do feel I share some of the views Manou and friends have from Nice, and I am curious to see more of the animated feature, and be able to fly over the same rooftops I photographed.