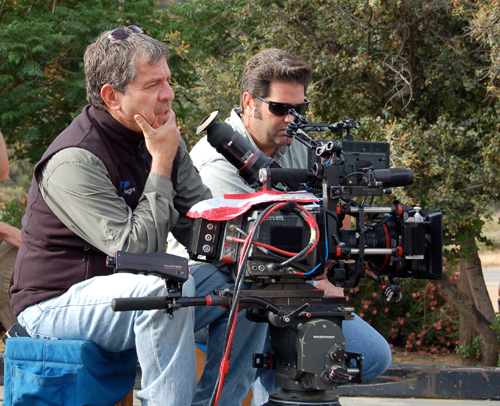 With the new season of Sons of Anarchy fast approaching, cinematographer Paul Maibaum is starting to gear up for another round of the hit FX Network series. And at the top of the gear list are OConnor fluid heads.

“Sons of Anarchy is a drama about the lives and inner workings of a Hell’s Angels-type motorcycle club based in the fictitious town of Charming, somewhere in Central California,” he explains. “Each episode is shot in seven days, that’s one day shy of the norm for a one-hour episodic drama. Therefore, we have to work very fast and smart to get the work done in the allotted time. There is a certain improvisational style to the way we shoot the series. The actors often come up with their own staging for a scene and in many cases, do something subtlety different in each take.”

While much of the cinematography on this series is hand-held, during long scenes shot with lenses of 100mm or greater, Maibaum’s operators find it difficult to maintain the proper steadiness for a hand-held look take after take. “That’s where the OConnor head comes in handy,” he says. “We mount the camera(s) on the 2575 and let the operators add some ‘float’ to the shot. In other words, they create the feeling that the shot is hand-held, by gently panning and tilting the head in small increments in a random manner. By adjusting the drag this way, it gives them the exact amount they need to duplicate the ‘edginess’ that we are looking for when the camera is in hand-held operation.

“During the past season there were several episodes where much of the action followed the members of the SAMCRO (Sons of Anarchy Motorcycle Club Redwood Original) as they traveled on their Harleys,” Maibaum explains. “We employed a ‘camera bike’, a motorcycle with a steel platform much like a sidecar, where one or sometimes two cameras can be mounted and operated in order to move with the cast on their motorcycles.

“Often, we use very long lenses to capture the action off the back of this rig,” Maibaum adds. “And, the OConnor 2575 heads make the perfect platform to mount the large Panavision Genesis cameras on to insure that we will get the shot.

“For us, OConnor heads are one of the most trusted tools in our package,” he adds. “The tension and fluid drag can be set within a wide set of parameters, very easily. The head can be tipped just about straight down and, once the balance is properly set, it remains securely there. The weight of the camera has little to do with the performance of the head. In other words, one can utilize cameras from the smallest and lightest to the biggest and heaviest.

“I would never do a show without a fluid head. And, my personal choice is the OConnor 2575.”