The new Broadcaster LTE for Verizon from Livestream eliminates the need for a separate gateway. 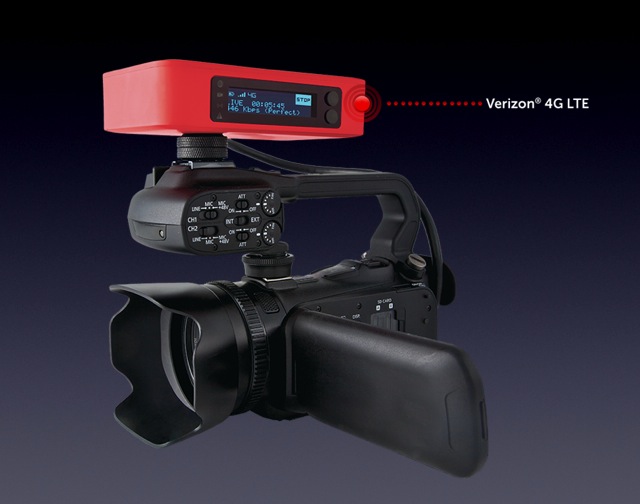 At CES 2013, Livestream has shown its new Broadcaster LTE for Verizon, to facilitate sending the live audio/video output of a camera’s or video mixer. Unlike the prior model, which requires external Internet access, the new model has it built in. Ahead I’ll go into more detail about that difference, and make some observations about its targeted use and a quick comparison to its competition.

Livestream Broadcaster: the original model versus its competition

The original Livestream Broadcaster receives a digital video signal over HDMI (and potentially an analog audio signal over a 3.5mm connection), encodes it, and establishes a proprietary connection to the Livestream server… but the original model requires connection to the Internet via Ethernet or WiFi (perhaps an iPad with LTE and mobile hotspot active, a MiFi or similar device in your mobile van). One reason that the original Livestream Broadcaster is so relatively inexpensive (US$495) is because it works exclusively with the Livestream CDN service, as opposed to other competitive encoders which are open to any CDN. So the original Livestream Broadcaster makes sense if you are committed to Livestream’s CDN service… and you are okay with transmitting 720p, 1080i, or 1080PsF which is masquerading as 1080i. (Details about that are available in my PsF missing workflow series.) On the other hand, if you need to be open to a different CDN (or if your intention is not to broadcast the signal of a single camera, but to take it as a microwave replacement as one of many sources to be switched or mixed with others before broadcasting the final combined program signal live), you might consider one of the competitive devices, some of which can remove the undesired pulldown on the fly and —more desirably and more efficiently— only encode and broadcast the desired frames.

Unlike the original version (described above) with required external Internet access, the new model contains an LTE gateway (often anachronistically called a “modem”) set for Verizon. This will save you need for an external device (perhaps an iPad with LTE and mobile hotspot active, a MiFi or similar device in your mobile van). Strangely, Livestream has not (yet) published a press release about the new Broadcaster LTE model. In the very brief information on their website, they indicated about the Verizon LTE capability. This partnership will likely represent a double implied commitment for users of the device, since it will likely only be useful when used together with Livestream’s CDN service and Verizon’s LTE. This is fine if you follow the logic explained in the prior section and operate in the United States. Although Livestream has not yet announced pricing on the new version with inboard LTE, it is likely to be similarly subsidized by the described exclusivity arrangements. It is not yet clear whether the new model will additionally include WiFi or Ethernet connections to use when available, to reduce LTE consumption.