Built with bluetooth compatibility, adjustable color temperature, and fully dimmable lighting, the compact and lightweight LitraPro can deliver up to 1200 Lumen of continuous, high quality light. 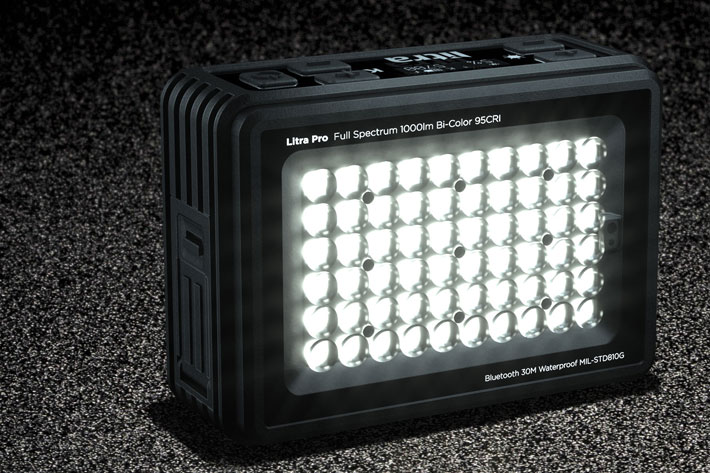 Litra is now on Kickstarter, with LitraPro, the world’s first full spectrum compact light, after having won a Best of Show Award at NAB 2018 for the intelligent design and technology of their professional light.

The Litra team is not new to Kickstarter. Back in 2016 Litra launched LitraTorch on KickStarter. That revolutionary product was well received as a “must have” light for adventures needing to pack light… with light, so much it has won awards and 5 star reviews, and continues to be in distribution world wide. Now, the company is back on Kickstarter, and their new project, LitraPro, is already funded, with 310 backers pledging a total of $60,610 when the initial goal was $20,000. With 28 days to go before the campaign ends, the LitraPro is confirmed as another success for a company that has been designing and manufacturing high end LED lighting products for the movie industry, professional photography, stadium lighting and a wide range of rugged consumer electronics for top global brands for over 10 years. 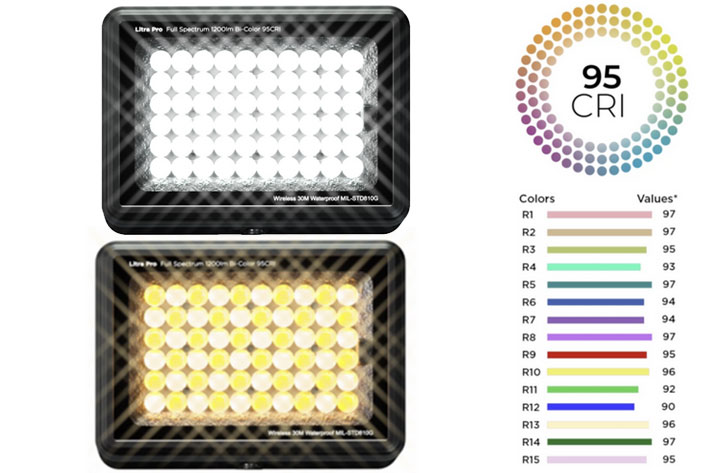 The LitraPro was announced at NAB, Las Vegas, in April 2018, and won a Best of Show Award for the intelligent design and technology of their new ultra rugged professional light. The compact and lightweight LitraPro can deliver up to 1200 Lumen of continuous, high quality light and has an impressive 45 minute run time at maximum output, yet it is just a 6 oz and 2.75″ x 2″ x 1.2″ in size accessory easy to pack and carry. Designed for the most demanding run-and-gun scenarios, remote production, mobile studios and impossible-to-light small spaces, its aluminum body has two industry standard 1/4 20 mounts for endless mounting options. 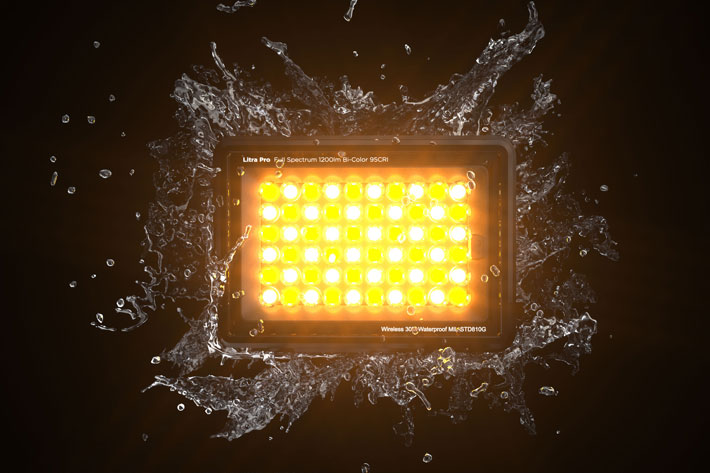 “LitraTorch, has been a huge success with customers, retailers and distribution partners globally as a basic pro photo and video adventure light,” said Scott Gant, President of Litra. “The LitraPro will build on this success, offering users the smallest, rugged, uncompromised lighting solution on the market. Imagine something this small, with this much light lasting a full 45 minutes on max output? This is a game changer!”

LitraPro features a OLED display and is powered by a built-in lithium-ion battery. Its easy-to-use manual and smartphone app controls make it extremely convenient and multifunctional across a variety of fields. Photographers can manually or remote control single or multiple LitraPro lights, up to a total of seven, from a smartphone app, with capabilities to adjust the power, color temperature, and Lumen level. This feature minimizes the effort and time for lighting setup and adjustments. With the exceptional ease and portability of the LitraPro, television and video teams can set up and teardown a fully controllable studio in the most remote locations. 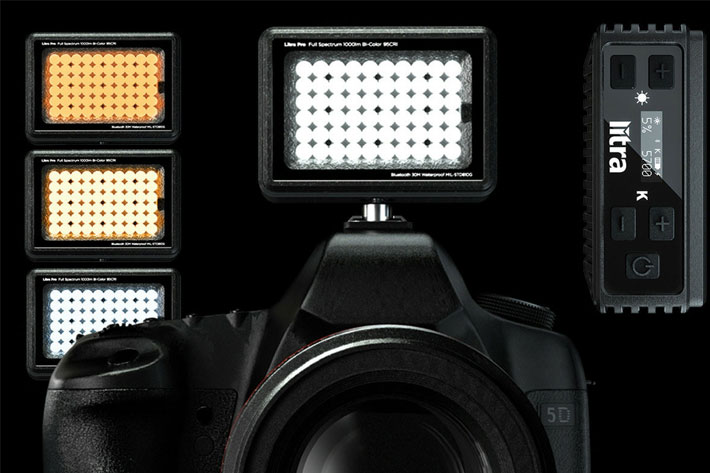 The new light can be dynamically adjusted while shooting real time. It has a 0-100% fully dimmable light, an adjustable color temperature from 3000K to 6000K that is factory calibrated to +/-100K accuracy and features a CRI of up to 95. With, according to Litro, no green spike and an enhanced red spectrum, it delivers full spectrum light that allows people to optimize their photo and video scene. It is a high fidelity light allowing you to control the lighting regardless of the lighting conditions in your environment. With a 70 degree beam angle, the light delivers a smooth and even light pattern with no center hotspots or harsh edges. It is also flicker free at all shutter angles. 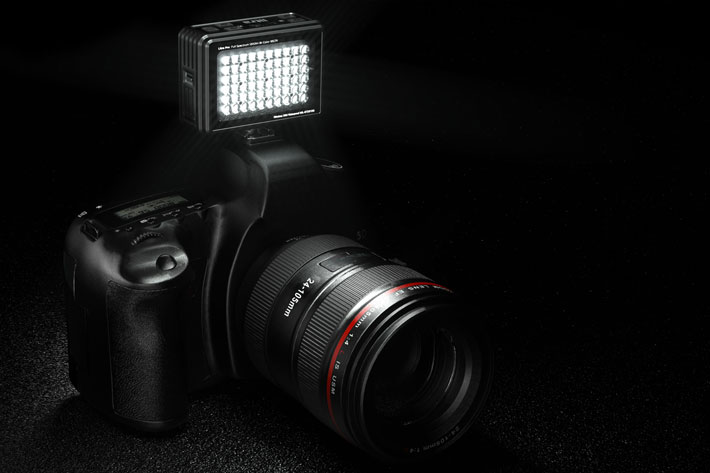 Designed for adventurers who need lighting in the most extreme conditions, the LitraPro  features a rugged 100% aluminum body which is MIL-SPEC 810 tested and waterproof up to 90 feet. Rain, sun, snow, dive, climb, drop, shock, grime, this light will take a beating and continue to shine on.

“A key feature to the LitraTorch success was the 100% aluminum body construction,” said Gant. “When you pick it up it just feels good, feels solid, feels like it will last. LitraPro was designed the same way. The aluminum body is not all about the look and feel though – it also it has 2 critical functions; a body armor so it can take a beating and a thermal heat sink to dissipate heat away from the LEDs and electronics.” 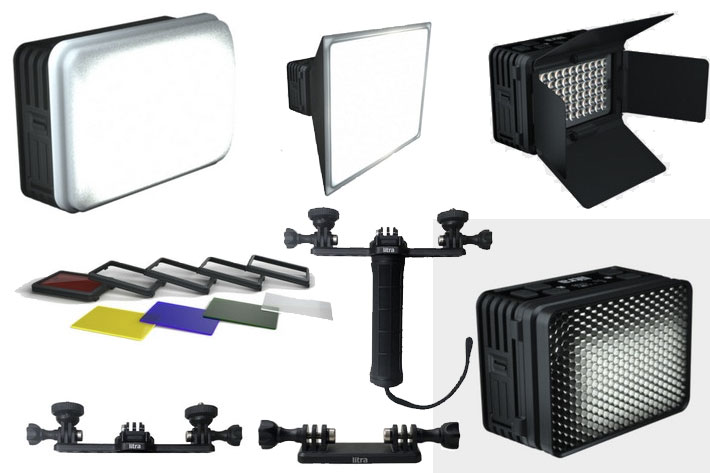 The versatile light meets the very high quality of light output essential for photo, video and TV production. It exceeds run time expectations for portable lighting solutions and is built to endure the inevitable bumps, drops and spills we all know will happen while filming. The LitraPro is not just a light, it’s the center of a whole system, with a range of custom accessories including barn doors, color filters, diffuser cap, soft box and mounts to meet set production needs and seamlessly pair with traditional video, DSLR and action sports video equipment.

The LitraPro was one of the highlights of Litra’s booth at Cine Gear Expo 2018, as the LitraTorch was before. The speed at which the campaign on Kickstarter has reached its goal confirms the interest this new product from Litra has received. If all goes according to the original plan,  LitraPro will be available for distribution in August for less than $220.